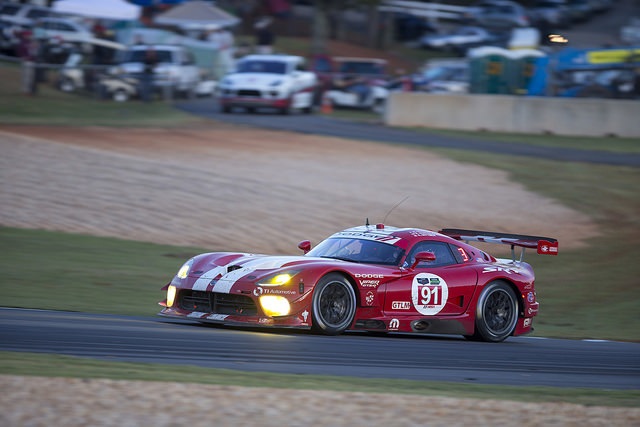 Hope you got your Viper SRT racing fix in this weekend at the Petit Le Mans, because Chrysler Group LLC announced today that it will be discontinuing the factory-backed SRT Motorsports racing program in the International Motor Sports Association (IMSA) at the end of 2014 season, which means no more SRT Motorsports Dodge Viper GTS-R racing.  Apparently, “The Dodge brand will redirect its focus and efforts on the brand’s product lineup, ” according to the press release issued by Chrysler.

Fortunately for Viper fans, the two-car team won team and driver (Kuno Wittmer) titles in the inaugural class, and won two-of-three championships contested in the class and finished second in the GTLM manufacturer championship in just its second full year of the program.

So, good news for SRT fans who want to drive these performance vehicles on the street, and bad news for those of us rooting for these upstarts in an upstart class.  So what do you think? Are Chrysler’s efforts better spent focusing on the performance of street legal vehicles or does the withdrawl from this race series signal a lost opportunity for Chrysler and  Viper fans?

About Andreanna Ditton 180 Articles
Andreanna Ditton is the Content Manager for MotorHead Media and the Editor-in-Chief for RacingJunk.com/news. She's been working in the automotive publishing industry since 2007 focusing on racing and performance for motorcycles and cars.