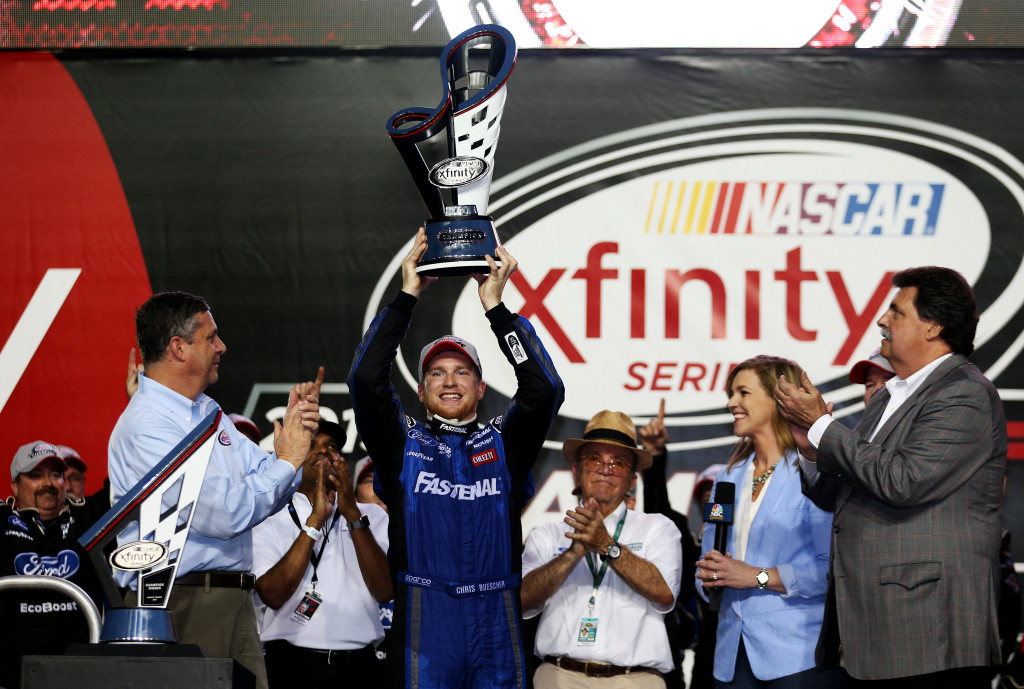 With all eyes on Chris Buescher’s Ford Mustang running in 11th for his first NASCAR Xfinity championship, the real battle was up front between Kyle Larson and Austin Dillon for the race lead.  Larson chased down the sprinting Dillon after the last restart and didn’t catch him until Dillon brushed the fourth turn wall with five laps to go.  Then Larson made his move with three to go, passing Dillon off the same corner and never looking back to win the Ford EcoBoost 300 at Homestead-Miami Speedway in a close season-ending finish on Saturday afternoon.

Meanwhile, Buescher’s opposition for the championship were running in seventh, Ty Dillon, eighth, Chase Elliott and Regan Smith in ninth, respectively, while he maintained a steady pace, playing out all the cards to be declared 2015 NASCAR Xfinity champion. 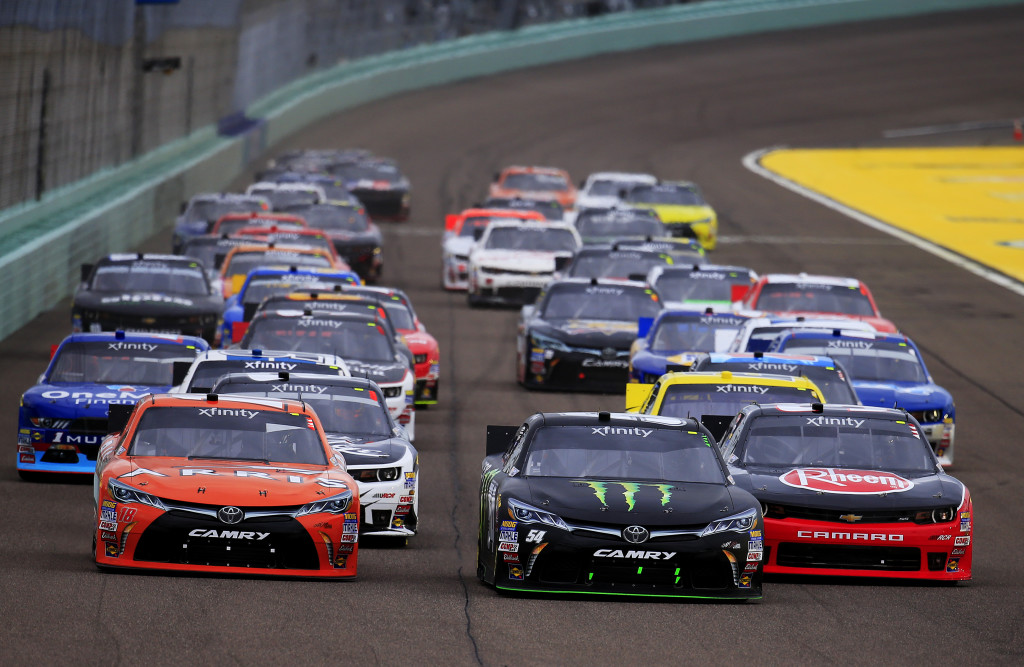 He won races at Iowa and Dover and came into Miami with a string of nine consecutive top-10 finishes.  All he needed was to finished 13th and he did after getting a great pit call by Buescher’s crew chief, Scott Graves deciding to pit, putting him in position for the ‘Lucky Dog’ position.  The strategy worked in his favor when Kyle Busch spun moments later with 20 laps to go, bringing out the sixth yellow of the day and giving Buescher a free ride back to the lead lap without having to worry about getting to the finish.

“We thought having fresh tires on it was going to put us in a better position,” crew chief, Graves said.  “We knew if we could be in the ‘Lucky Dog’ situation, we were basically going to be on even ground [with our competitors].  With the number of laps that was left, we felt that was going to be our best option.” 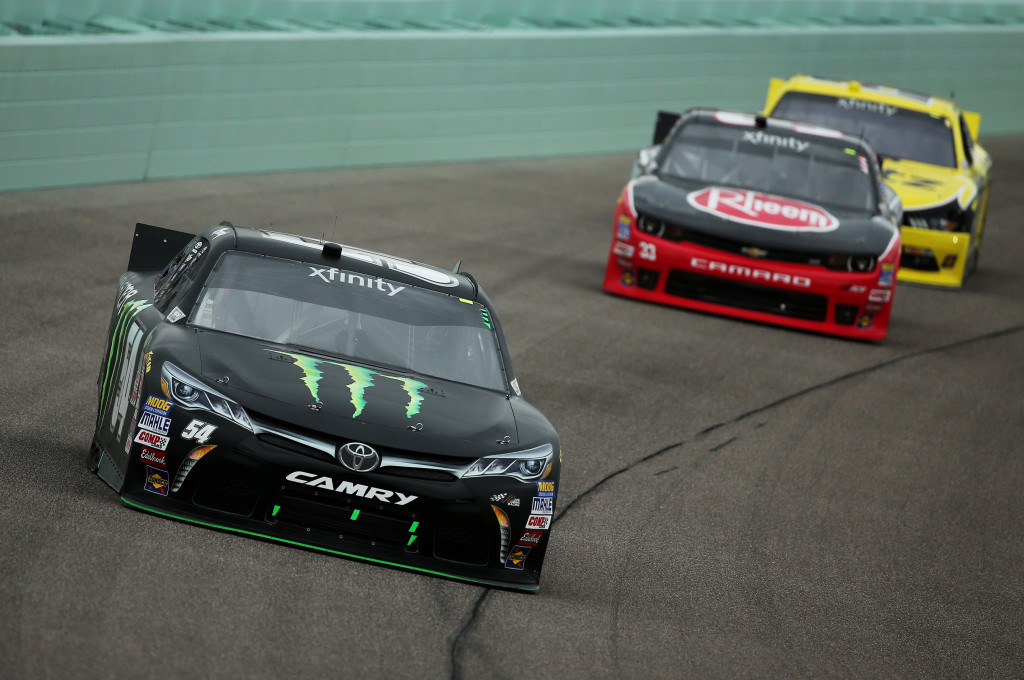 Just as he was about to speak, it appeared the moment was sinking in and an emotional Buescher was thinking about reaching his dream.

“Our Fastenal Mustang had good speed in it, but we just had to be careful out there,” Buescher said.  “It’s unbelievable for us to be able to pull it off.  I’m not a ‘points’ racer.  I don’t like it.  But it was important [to finish] what we’ve been fighting for since February and Daytona.”

The championship was car owner’s Jack Roush’s fifth Roush-Fenway driver’s title and first since Ricky Stenhouse did it in the back-to-back years of 2011-12, now winning three in the last five years. 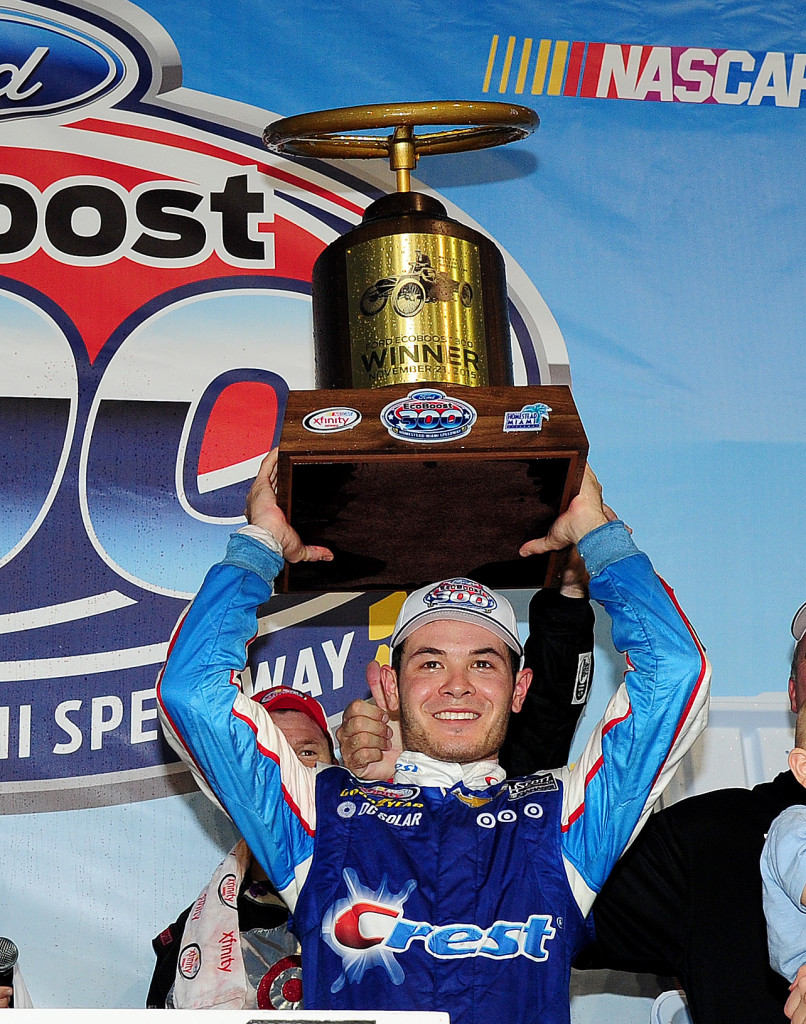 The winner, Kyle Larson, was ecstatic about taking the checkers at the Ford EcoBoost 300 because he had to pace himself to save fuel while he wanted to be more aggressive going after Dillon.

“I was pretty frustrated with myself with 12 or so laps to go when Austin was about half a straightaway in front of me, and I didn’t even know if I could get to third, really,” said Larson.  Once the tires kind of slowed down, I was able to close very quickly on those guys and get to Austin’s back bumper and kind of put a little pressure on him to make a mistake because he knew he had to move up and try to take my line away and do it really fast.

“He just got in the corner a little too hard and straight and got into the wall, and I was able to get my car turned down underneath him and come away with the lead off 4 and then just kind of cruised to the win.  There’s no other track that suits me like this track.  I’m just really comfortable running up against the wall.  I seem to always have good race cars when I come here.”

When it came time to celebrate, however, Larson drove directly to Victory Lane, respectfully leaving the burnout to the Xfinity Series champ.

“This is championship week, so congratulations to Chris Buescher,” Larson said, who led for 118 circuits.  “I wanted Chris to have his moment there.” 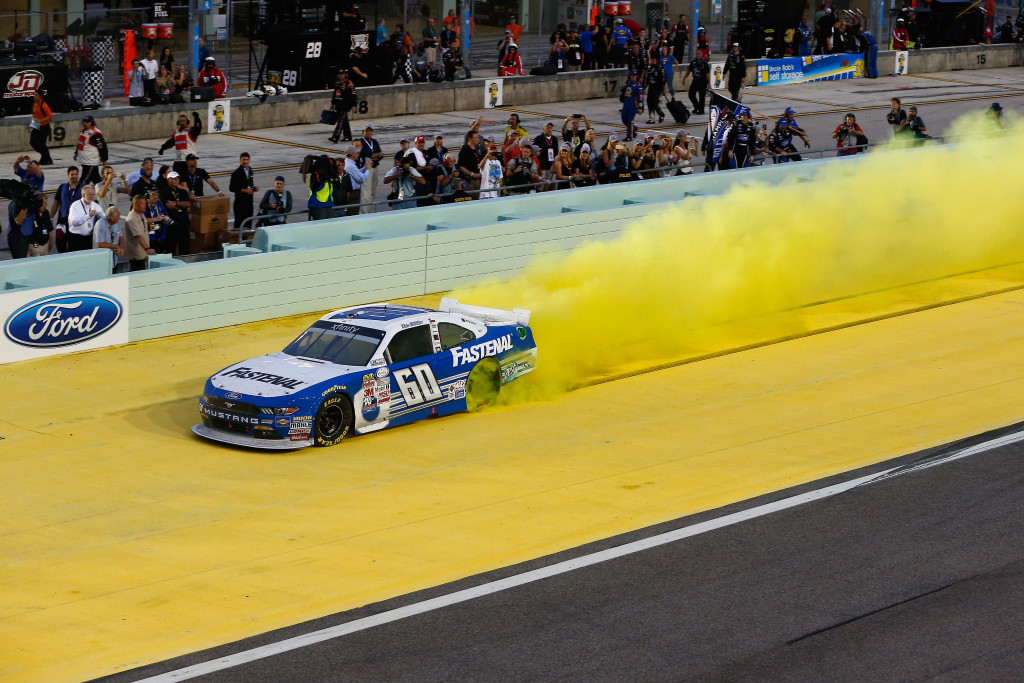 “We had an up-and-down season,” said Elliott, who won three Xfinity Series races in 2014 but lamented his ability to win just once this year (at Richmond).  “They just outran us, fair and square.  No reason to be upset about that.  We just need to do a better job.”

The average speed of the Ford EcoBoost 300 was 128.266 miles per hour with the yellow flag flying six times for 26 laps.  There were 13 lead changes among five drivers.

The NASCAR Xfinity series gets the season started at Daytona International Speedway for the running of the PowerShares QQQ 300 on Saturday, February 20, 2016.