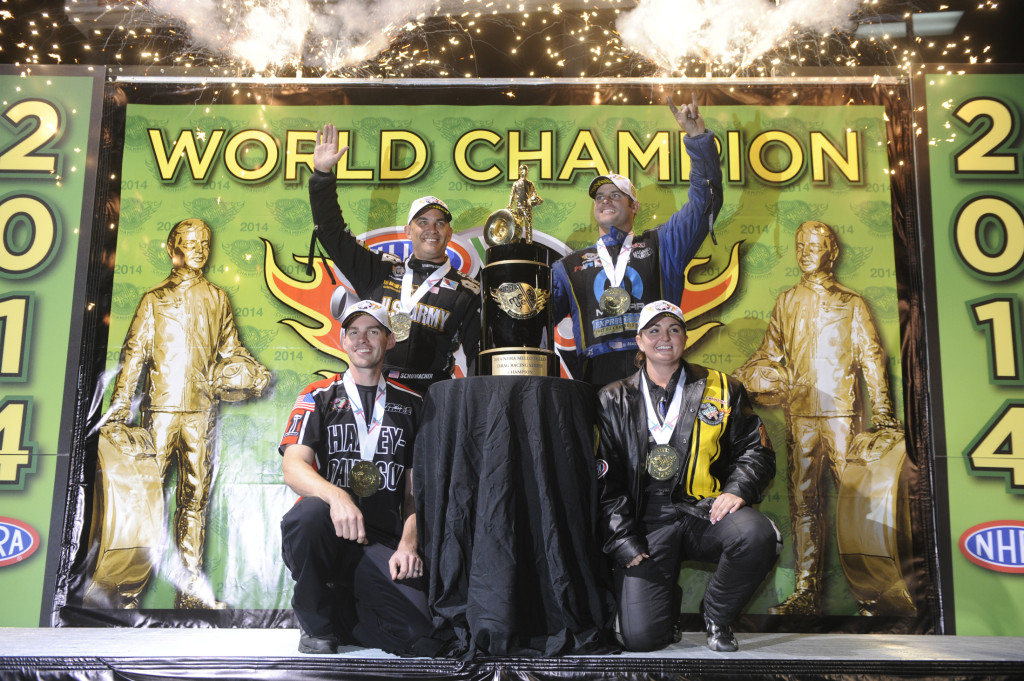 The 50th annual Auto Club NHRA Finals was a spectacular roller coaster of emotion and racing and at the Sunday Finals, none of the racers held anything back.

Adding to his win in Brainerd, Minn., earlier this year, Morgan Lucas powered his Top Fuel dragster to a season-finale upset victory at Pomona.

Starting  in the Sunday eliminations against Billy Torrence, Lucas got off the line first with a .047 reaction time and tripped the win light with a 3.745-second pass.  However, a pedalfest victory against Shawn Langdon in round two really put Lucas’ day into overdrive.

Not knowing what to expect after a blown engine the round before, Lucas faced off against Antron Brown in the semifinals.  Posting what was the second-fastest pass in NHRA history at 3.707 seconds, Lucas was clearly on a mission to bring home the second Wally of his part-time season.

“Blessed doesn’t even begin to describe it,” Lucas said.  “(Crew chief) Aaron Brooks deserves all the credit for what he’s done by leading this team and working so hard to make it all happen.  I’m just so proud of everybody.

“I wish we were racing Richie (Crampton) in the final obviously, but that guy has a lot of wins ahead of him in his future and hopefully so do I.  You never know when it’s going to be your last one.  So for me, if it was the last one, I guess I wouldn’t mind too much.”

Heading into the final against newly crowned eight-time Top Fuel champion Tony Schumacher, Lucas knew he would need to mirror his stellar run in the semifinals if he wanted the best chance to grab the Wally.  When the lights on the Christmas Tree dropped, Lucas not only mirrored his previous time but bested it, resetting the second-fastest time in NHRA history to 3.704 seconds and grabbing the win.

“Usually when you win the championship you win the race to go with it,” Lucas said.  “It’s kind of like a deal-sealer.  I’m surprised that’s not how it happened again but this team is just so awesome.  It’s just crazy.  It’s just a crazy, crazy night.

“My parents were here, my little baby Hunter, and my wife Katie obviously.  I was looking after the win, waiting to see Katie and I got a big kiss from her, but I can’t wait to see Hunter.  He won’t know what’s going on but someday he’ll know it’s special.”

After finishing runner-up at Pomona, eight-time Top Fuel World champion Tony Schumacher reflected on a year that saw his U.S. Army team struggle in the beginning, but struck gold at the end.

“It was an awesome year,” said Schumacher, who beat Larry Dixon, No. 1 qualifier Richie Crampton, and J.R. Todd in today’s opening three rounds of eliminations.  “You know, the guy just ran a 70 (3.70 seconds) against me.  I should go wash his car or something.  That’s awesome.  We made it go down the track and we made it go down the track fast and, if he stumbled, we were going to beat him.  But, I don’t know if we know how to make a 70, yet.  So, congrats to them and, for us, a great job because we’re the world champs.  For Mello Yello and the NHRA and the Safety Safari and all the people who make all of this work so well, it was a great job.  It’s been an incredible Countdown for the U.S. Army team.”

The 2014 NHRA Funny Car season finished just as it started for Matt Hagan, with the Don Schumacher Racing Dodge Charger driver meeting rival John Force in a final-round battle at Auto Club Raceway at Pomona — except this time the twist was a storybook ending for the Team Mopar star.  Hagan exacted revenge for his NHRA Winternationals loss to Force back in February by claiming victory at the 50th annual Auto Club NHRA Finals and putting the cherry on top of a day in which he clinched the coveted 2014 NHRA Funny Car crown, the second of his career.

The Don Schumacher Racing (DSR) driver’s Pomona triumph marks his second consecutive at the season-ending NHRA Finals and the 14th overall Funny Car victory of his career in 30 final-round appearances.  Hagan ends 2014 with four victories on the season.

Hagan, the No. 6 qualifier, watched from the cockpit as Force, in the pair ahead, won his own first-round match to pull closer in the title chase.  Hagan answered the bell and advanced to the quarterfinals, posting the quickest pass of the round, 4.015 seconds, 320.05 mph, to eliminate Chad Head (5.083/167.63).  Waiting in the second round was Hagan’s DSR Dodge teammate, Ron Capps.  After once again watching Force apply pressure by winning his match, Hagan held serve, knocking out Capps with a time of 4.081 seconds, 314.83 mph to a 6.801 ET at 100.94 mph.

In the semifinals, faced with yet another all-Mopar Dodge DSR battle against Tommy Johnson Jr., Hagan clocked a winning time of 4.065 seconds, 315.86 mph.  With the 2014 title already clinched prior to his final-round battle against Force, Hagan added icing to the cake, racing the 16-time champ to the finish line first with a pass of 4.076 seconds, 310.77 mph to Force’s losing 4.086 second time at 276.58 mph.  Hagan left first with a .049 reaction time, led until the 660-ft. mark, where Force edged ahead, then surged back near the stripe to claim the event win.  The ending was fitting — for the fourth time in the last five years, Hagan and Forced have duked it out for the NHRA Funny Car championship.

“It’s not about how you start but how you finish,” said Hagan, who began the six-race NHRA Countdown to the Championship back in the seventh spot but claimed three playoff wins on four final round appearances to end the season on top.  “I just can’t believe that it all came together in such a fairytale way.  It’s just an awesome deal to win the championship and then also win the race.  This Countdown format is crazy.  You have to be strong in the Countdown and have some good races there, and the rest takes care of itself.

“It means a lot to be a two-time champion.  Honestly, it’s about our team and all the guys that have worked so hard.  It may have come down to just one day, but really it’s the last six races that led us to this point.  Making the right decisions, digging deep and doing a gut-check out there — at the end of the day it comes down to my crew chief and my crew guys that have busted their butts day-in and day-out to make it happen, and I can’t be prouder of them.  It was one common goal and ten guys working together, and at the end of the day we got to hold both trophies up.  I told myself this morning that this is what we worked hard for all year long.  I don’t need to sweat it.  I don’t need to be nervous.  Just trust in your stuff and race your race car and enjoy the moment.

“The championship was really what we were after.  The race win was the icing on the cake.  But it solidified that we had a great race car.  To be the best you have to beat the best and everyone says he (Force) is the best and we beat him.  It was nice to finish it out strong.  We beat him here this time last year (at the 2013 NHRA Finals) and we did it again, so hats off to him.  They had a great car, but we had the better one today.”

Taking fate into her own hands, Erica Enders-Stevens not only captured her sixth win of the season at the 50th annual Auto Club NHRA Finals but also the title of 2014 NHRA Pro Stock World Champion.

Surpassing Larry Morgan and Rodger Brogdon in the first two rounds of competition, Enders-Stevens’ Elite Motorsports Chevy Camaro continued to step up round after round.  But after both her and Jonathan Gray had perfect .000 lights in the semifinals, it was obvious Enders-Stevens wasn’t going down without a fight, advancing to the final round with a 6.494-second pass.

With the championship on the line during the final-round matchup against Jason Line, Enders-Stevens sealed the deal.  Both drivers turned on the red bulb, implementing the “first or worst” rule, and Enders-Stevens’ -.002 reaction time beat out Line’s -.011 and secured her first season title.

“Teamwork makes the dream work,” Enders-Stevens said, “and that’s perfect proof that with the right group of people anything is possible and that’s all through God.  I’ve got the right group, a group that stands behind me, and we have a blast together.  That’s what it’s all about.  Win, lose, or draw we love each other and that’s all that matters.”

Already with numerous accomplishments in the record books, Enders-Stevens join Shirley Muldowney and Angelle Sampey on an elite list of female NHRA champions.

“They are heroes of mine,” Enders-Stevens said.  “I’m so thankful for their help and support in this venture.  It means a lot to me to have my name on a list with Shirley Muldowney and Angelle Sampey.  They’re incredible racers and incredible women.  What a blessing; this is awesome.”

Starting the dream season with a fresh start at Elite Motorsports, Enders-Stevens always knew that they were capable of going all the way.  Her win in Pomona proved that.

“I definitely grew a lot,” Enders-Stevens said.  “I learned a lot, I became better, and so did our team.  I have them to thank for that.  It was a long, hard year.  I had to sit out two races and we were still able to accomplish this dream, and it says a lot of what we’re capable of.  The sky is the limit.

“We’ve got a lot of great things happening for 2015, and I just couldn’t be more proud of my guys.”

Andrew Hines captured his fourth Pro Stock Motorcycle world championship and first since 2006 when he claimed the first-round win over Katie Sullivan.  Hines raced to six victories during the season to earn his first championship in the Countdown era aboard his Screamin’ Eagle Vance and Hines Harley-Davidson.

“I’ve been waiting a long time to be able to write ‘4x’ next to my name,” Hines said.  “It was nice to finally get it done, but also to get it done with a win.  I didn’t really want to have to be the guy who waited for someone else to lose to clinch it.  It’s great to get that big trophy and that big check, but the biggest trophies I have are my wife, Tanya, and my kids, Declan and Rion.”

Hector Arana Jr. went on to claim the race victory on his Lucas Oil Buell, taking his second win of the season and ninth of his career by outrunning Hines’ teammate Eddie Krawiec in the final round.

“I popped the clutch and never saw Eddie,” Arana Jr. said.  “My bike went straight down the track and it was an amazing feeling.  This is going to be a good off-season.  I’m glad we got the win for the team.  This is a good confidence booster.  It’s good for our morale for the next four months.”