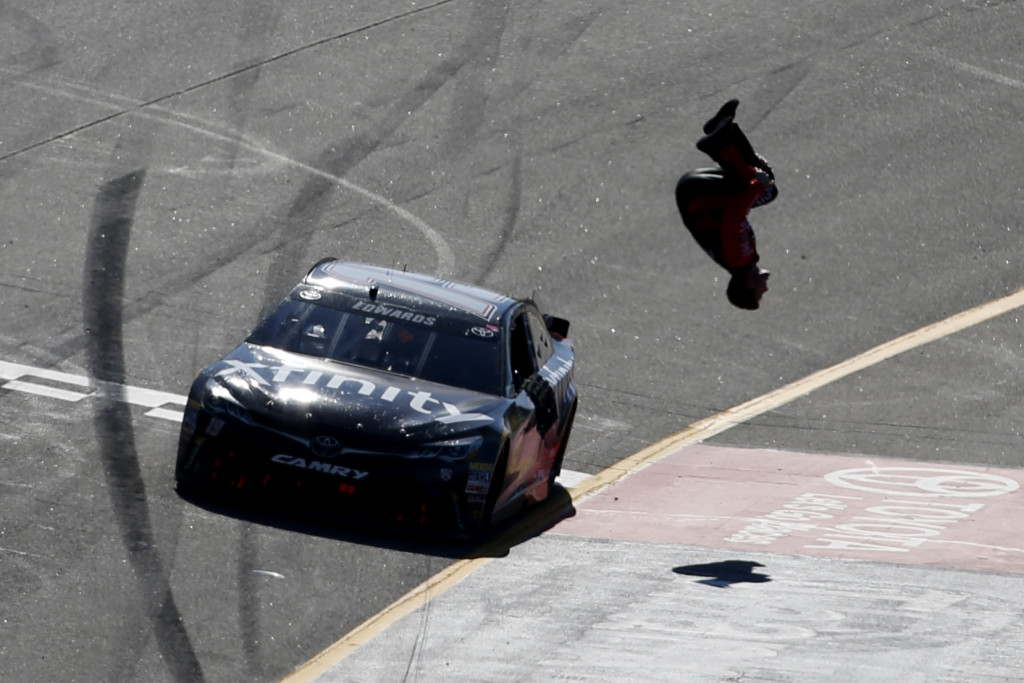 It was Carl Edwards who made a last lap charge against Kyle Busch’s bumper to at first push him and then move him high to pass to the inside in clearing his path in winning the Toyota Owners 400 NASCAR Sprint Cup race at Richmond International Raceway.  The pair of Joe Gibbs Racing teams that have won the last four races in a row had been running 1-2 with 36 laps to go and stayed consistent matching their equal horsepower until the white flag lap when it appeared that Busch might have had a problem.  With Busch reducing his speed, Edwards had  a chance to catch up and go for the lead.

It was Edwards’ second straight NASCAR Sprint Cup win, capturing last week’s Bristol race granting race fans in the Old Dominion State an Edward’s back flip special at the start/finish line bringing the packed crowd to their feet with approval.  It was also the first last lap pass for a win in RIR history that dates back to 1950s.

“Kyle’s an amazing teammate, and it’s like he got really slow there at the end,” Edwards said in Victory Lane after leading for 151 laps.  “Something happened on that last lap.  It was like his rear tires went off or something.  He went down into [Turn] 1, I drove it in getting to him, and I thought, ‘Man, I’ve got something.’ 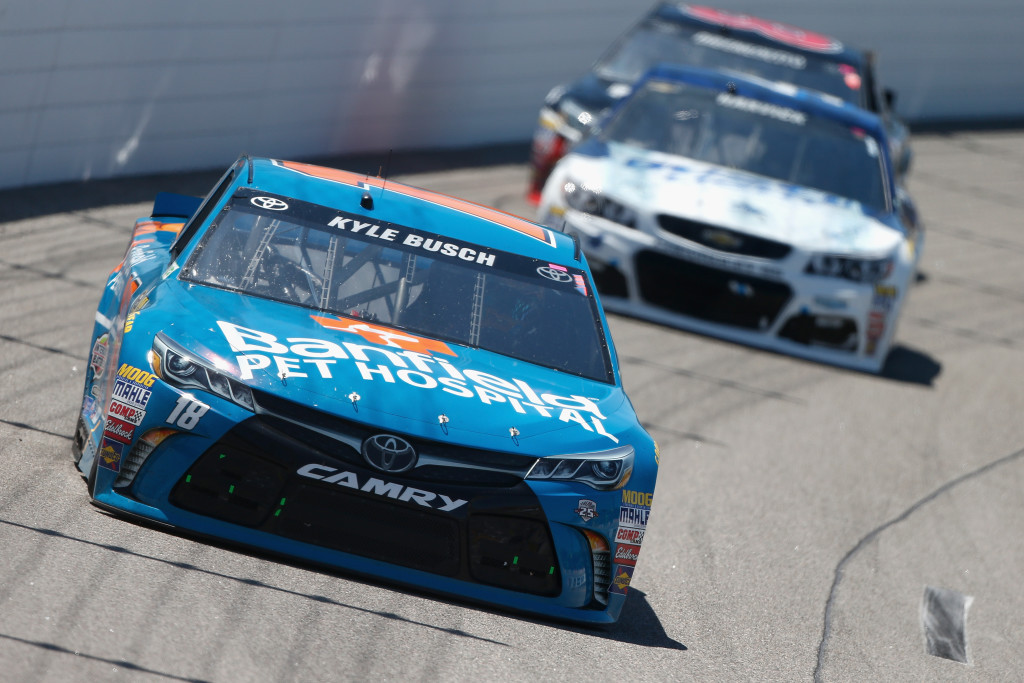 “He went to get down to the bottom and park it in 3 and 4 and I had already decided to go down there, so I thought, ‘Man, I’m going to give him a little nudge.’  I wish it were anybody but my teammate that we had to race like that, but big picture to me is we both have some wins, we’re in the Chase, and it’s fun to have to race your teammate for the win.  If the roles were reversed, I would have expected him to bump me the same way.”

Busch got the lead during the last caution period after a lightning fast 12-second pit stop for four tires and fuel on lap 360 that moved him from third to first with Edwards trailing in second.

After the race, Busch was biting his lip giving adroit answers to almost every question that came his way in the media center, not really offering his opinion on anything that happened on the track, but would only say the same thing in a manner of thinking of what not say that could come out as critical. 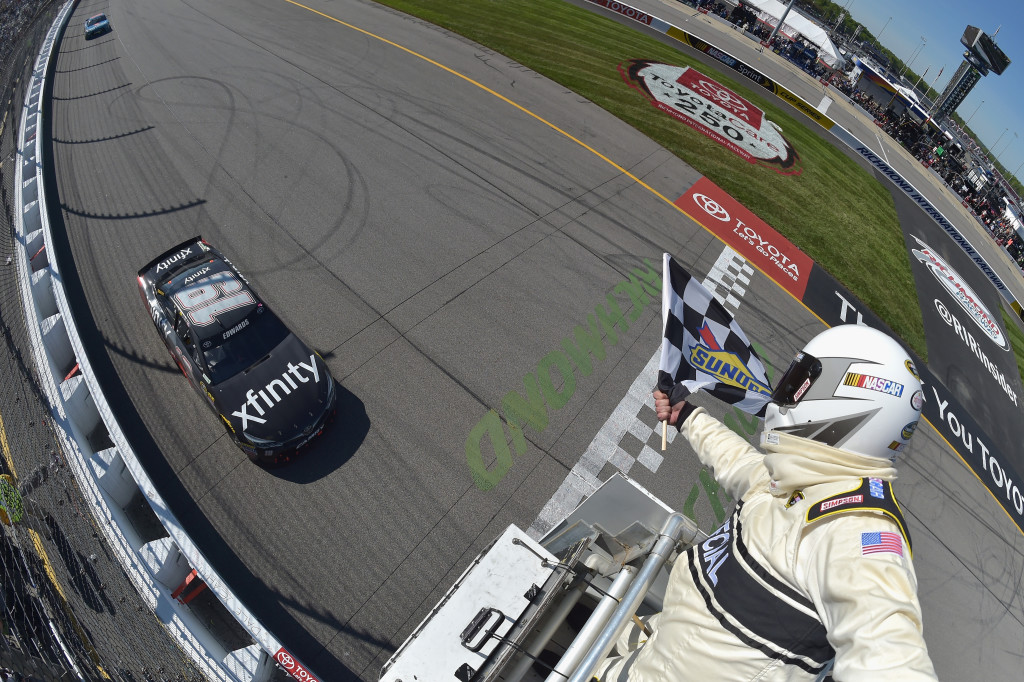 “Our Banfield Camry was real awesome today,” said Busch in a deadpanned tone.  “We had a great race car.  My guys made some awesome adjustments to it.  It was really good for us to have an opportunity to run and race for the win like that.  My guys give me great race cars each and every week.  We continue to have fast Camrys.  We’ll be continuing to run up front and race for wins.”

For car owner, Joe Gibbs, he stated that his team will regroup, but will first discuss about what happened between the two dedicated racers.

“I think when something like this happens, I don’t think there’s a game plan for it,” said the three-time Super Bowl champion coach, Gibbs.  “You have no real organized way of handling it.  What you do is you start out and work your way through it.  That’s what we’ll do.

“So, you know, it’s a tough thing because it’s certainly painful for one side.  You’re on such a high with the other side.  It’s a tough thing.  What we’ll do is go to work and work our way through it.”

Finishing third was Jimmie Johnson, who had at times had a competitive car, losing some of his handling towards the end.  His Hendrick Motorsports teammate, Kasey Kahne was fourth, racing to his first top five finish since last October.  Rounding out the top five was Kevin Harvick.  Sixth through 10th belonged to Denny Hamlin, Matt Kenseth, Joey Logano, Martin Truex, Jr. and Kurt Busch. 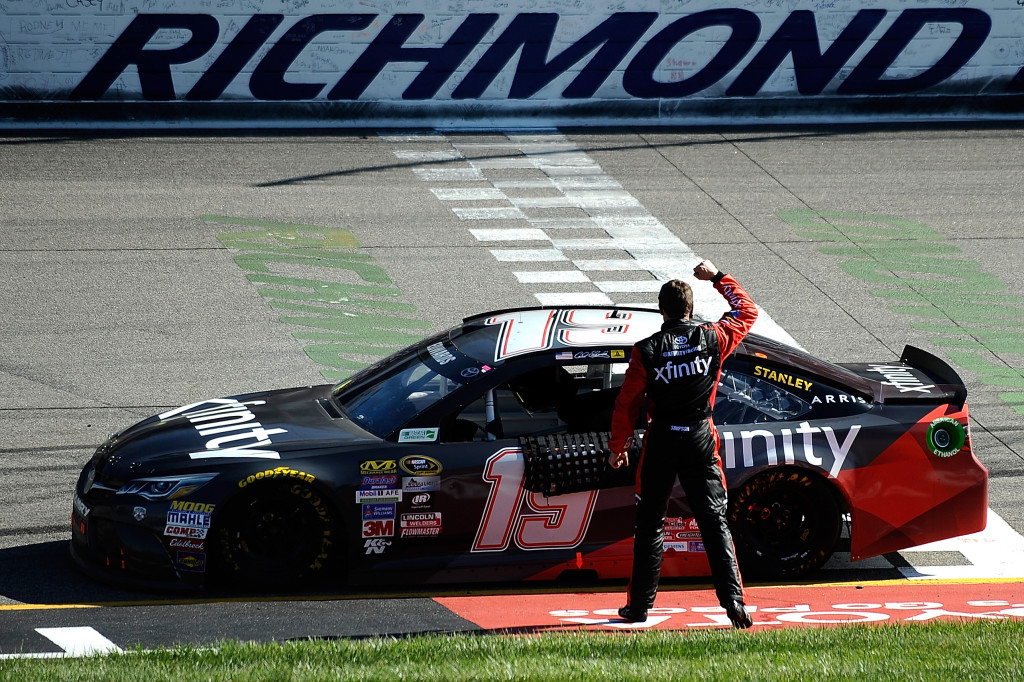 The return of Tony Stewart after his back injury and surgery produced a 19th place finish at Richmond, despite losing time due to a cut tire fighting off then leader, Edwards to stay on the lead lap.

The average speed of the Toyota Owners 400 was 97.070 mph following eight caution flags for 49 laps.  There were 23 lead changes among eight drivers.

Up next for the NASCAR Sprint Cup series is the 2.66-mile Talladega SuperSpeedway for the running the GEICO 500 on Sunday, April 30, airing on the FOX Network at 12:30 p.m. EST.