Steve Torrence (Top Fuel) tore through the competition in taking his wire-to-wire victory in the NHRA Summernationals, and for rapid Ron Capps (Funny Car) and Greg Anderson (Pro Stock), meeting in the winner’s circle is becoming a regular occurrence, winning in back-to-back NHRA National events in their respective classes in just six days.  As for Pro Stock Motorcycle winner, Angelle Sampey, she was ready to claim her first Wally since 2007 telling the rest of the two-wheel field that she’s not only back, but also ready to contend for another title.

This being a four-race swing of the east coast, the second stop was a major race on the Mello Yello tour at Old Bridge Township Raceway Park, and the significance of conquering the Summernationals is season changing.  It’s the 10th race of the year and kicks off the second half of the regular season so now is the time to start getting things right. 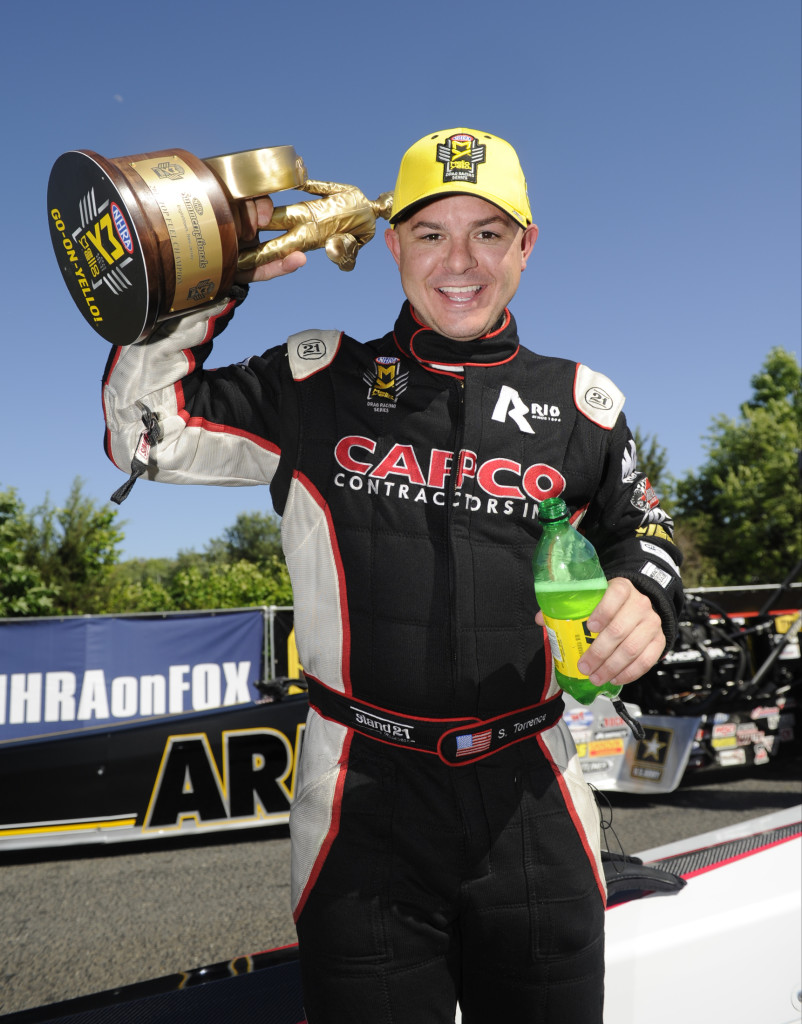 Steve Torrence, driving his powerful and consistent Capco dragster, raced past eight-time series champion Tony Schumacher in the final round  in what is becoming pretty routine now, defeating NHRA’s most prolific driver in their last three last match ups.

If the 33-year-old Texan’s overpowering victory in the season-opening Circle K Winternationals at Pomona, Calif. was a study in perfection, Sunday epitomized the contrasting concept of “winning ugly.”

The normal problems of achieving maximum traction with a 10,000 horsepower race car were exacerbated by high winds that continually blew dirt onto the track surface.  That made it much more of a crew chief race and Torrence proved equal to the task even though he spent an agonizing few nano-seconds waiting for Schumacher to drive past him at the finish line.

“This is huge,” Torrence said of the bookend for his 2012 Summernationals win.  “This was a tough race.  Smoking tires, a pedal-fest.  Down there at the end, my car shuts off before the finish line.  I could tell it had holes out (cylinders that no longer were firing), and it wasn’t wanting to go anywhere.  It knocked the belt off so I’m trying to Flintstone it to get it to the end and somehow we managed to squeak in there ahead of Schumacher.”

To get to his final round, he raced past Smax Smith, J.R. Todd, and Brittany Force to set up the classic final.

Only the outcome was anything but that, as Torrence puffed the tires as Schumacher’s dragster was doing the same thing and it became a pedal contest, which proved to be the decisive blow against Schumacher for Torrence’s seventh Top Fuel victory of his career.

“We took a bunch of timing out of it and slowed the flows down,” Torrence said of the planned de-tune.  “It didn’t like it.  It put holes out.  But the bottom line is it wasn’t smokin’ the tires.  I could hear [Schumacher’s car] when we left.  I could tell he was right with us.  I could hear him slap the throttle and I knew he had to pedal it.” 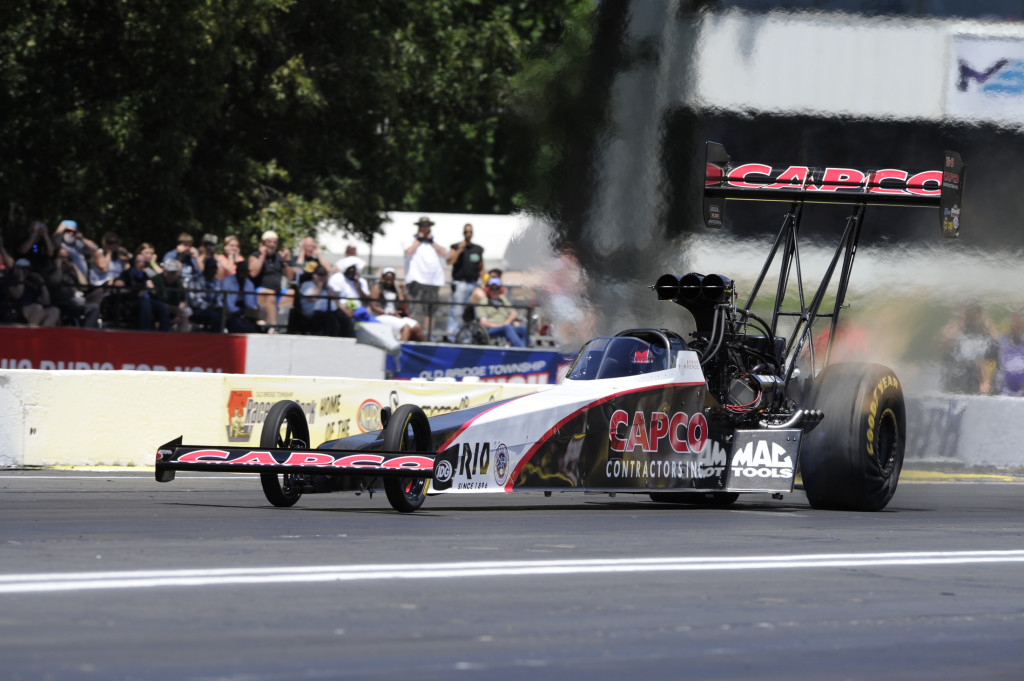 Torrence shot up to third in the Mello Yello standings, trailing Antron Brown by 16 points and leader, Doug Kalitta by 65 markers. 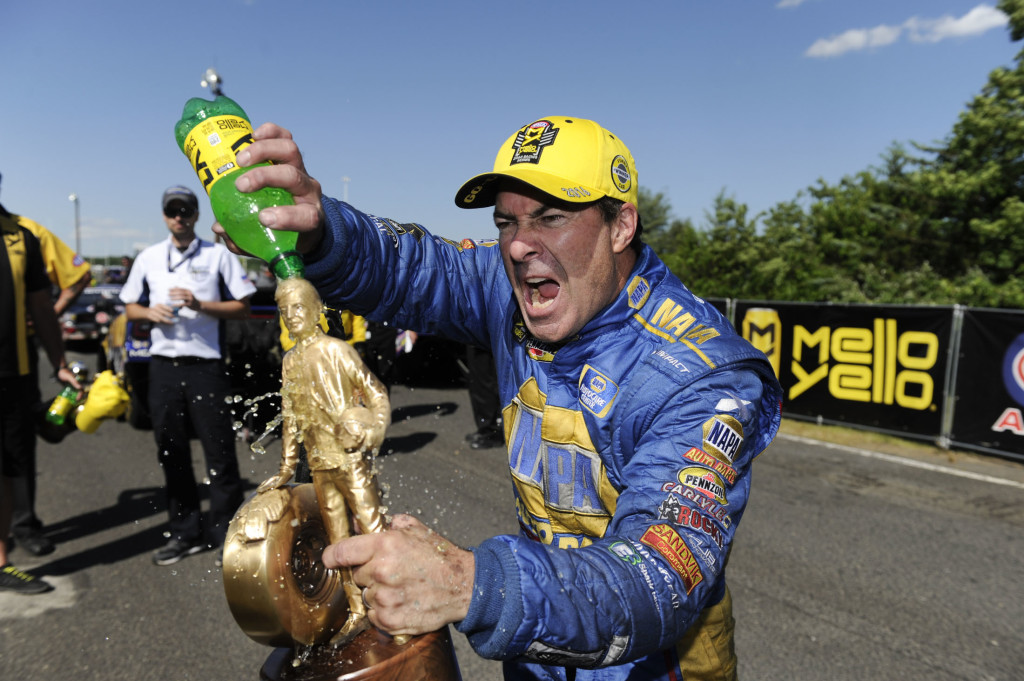 It might have been a crew chief battle in the other classes, but for Ron Capps and his crew chief, Rahn Tobler had everything calculated to perfection using their own ‘NAPA Know How’ directing Capps to his second consecutive.  Nearly every other nitro team at Old Bridge Township Raceway Park found themselves in finding a tuning combination that would conquer the 130-degree racing surface on Sunday.

The NAPA squad also helped Capps get the No. 1 qualifying spot (3.870) for Sunday’s eliminations, marking the first time he has ever been on the pole in back-to-back races.

Capps marched through eliminations, playing it smart in the first round against John Hale.  He ran up against John Force for the 83rd time claiming his 31st win in the match up history in the quarterfinals.  Del Worsham was next with Capps beating him in the semi-finals to take him to his 47th Funny Car win running a 3.954-second pass, 316.90 mph.

“It’s great. It’s something you hope will happen at the end of the day,” Capps said.  “Rahn Tobler’s given me such a fun car to race.  I almost felt embarrassed driving this car today because it’s so good.  You just don’t want to mess up when it’s that good; it’s yours to lose.

“Other guys are struggling to get down the track and our car’s going .95 and .96.  It wasn’t just that we didn’t struggle, we did.  We just worked so good together today, a lot of communication.  It won’t go forever, but at least we’re having fun right now.” 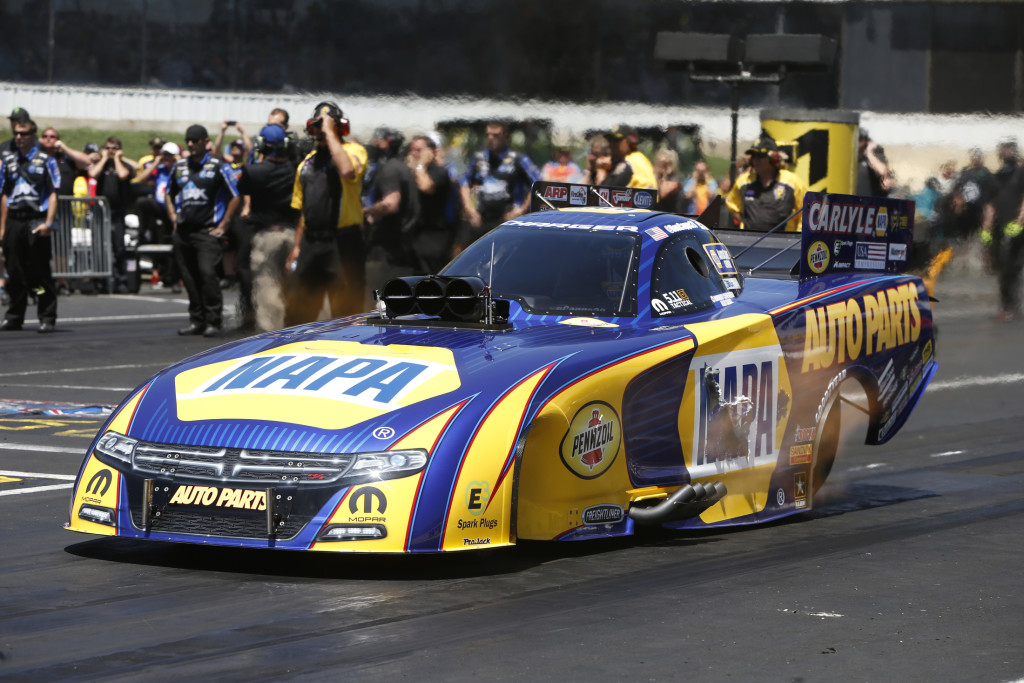 Being on top from start to finish also propelled him into the points lead snatching it away from his Don Schumacher Racing teammate, Jack Beckman by 27 and 71 over Courtney Force in third. 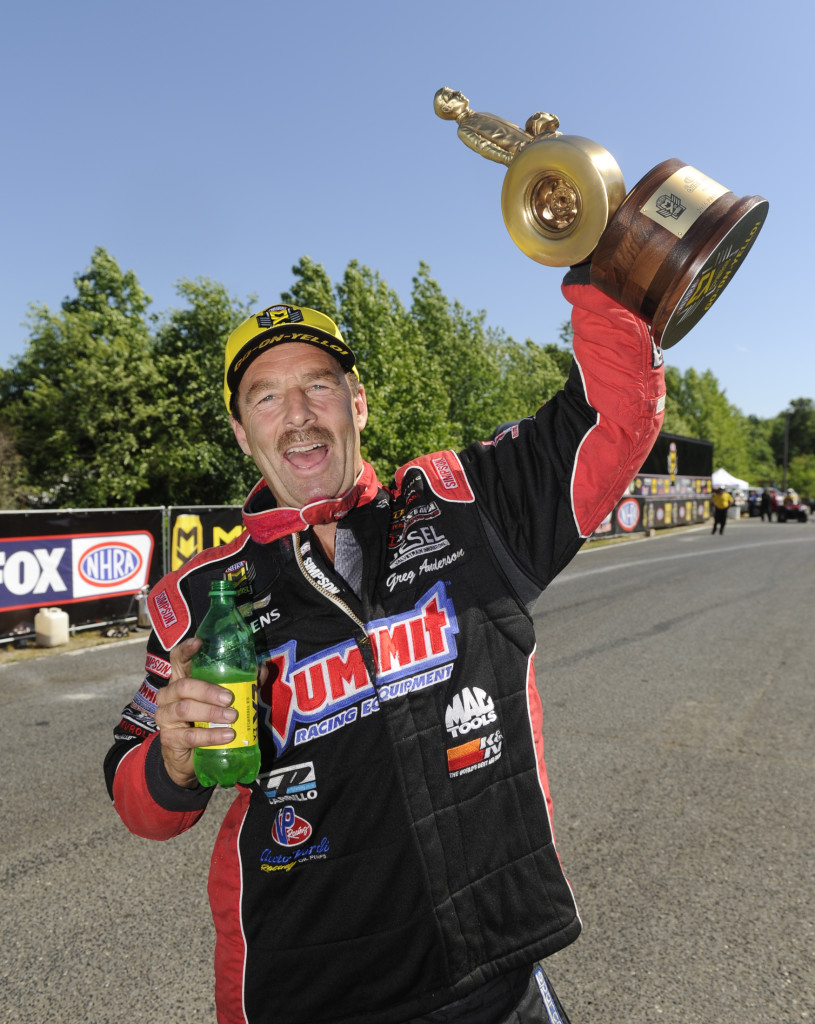 In Pro Stock, Greg Anderson won his fifth victory of the season, 83rd of his career and seventh at Englishtown with a 6.610 at 210.93 in his Summit Racing Chevrolet Camaro over teammate Jason Line, who red lighted.  Anderson has raced to seven final round appearances so far this season.

In the 30th head-to-head final between the longtime Summit Racing teammates and ninth time this season, Greg Anderson ran 6.610 seconds to Jason Line’s 6.615.  However, Line red lighted (fouled) at the start and Anderson holds and 18-12 advantage in finals.  Both drivers each have five victories on the season.

“It’s unreal,” Anderson said, “It’s just absolutely been a dream season.  I keep wanting to pinch myself.  It’s just cool and we’ve had such a great run.  This was another great weekend.  It’s just one more time that Englishtown tells me how much it loves me and how much the fans up here appreciate Pro Stock.” 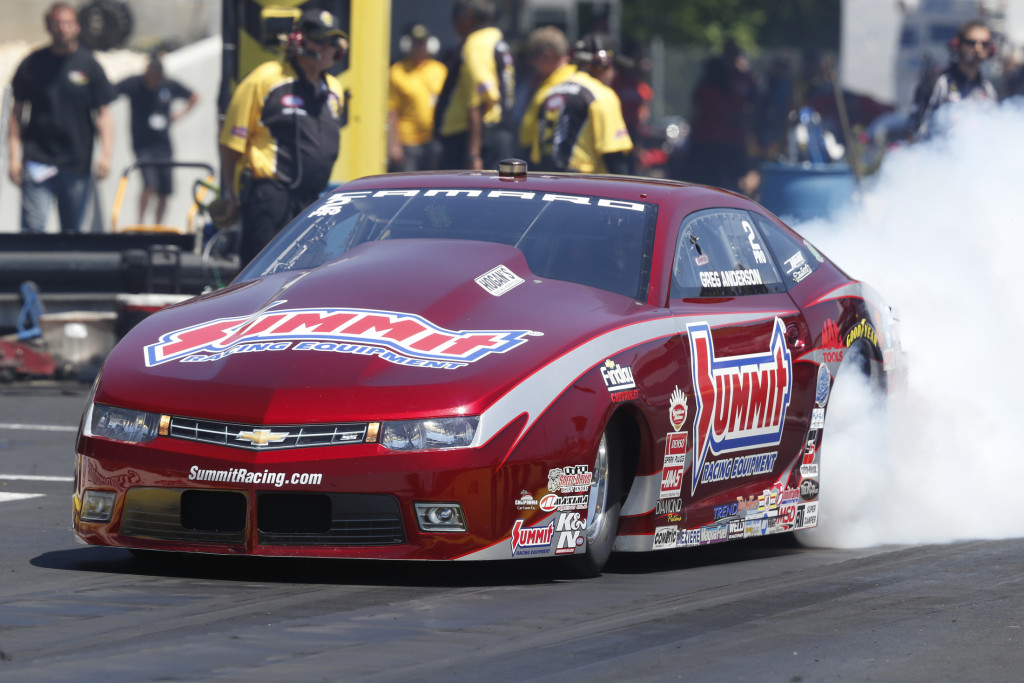 Anderson’s win continues the Ken Black Racing domination of the season.  He and Line have won all 10 of the events so far.  Line holds the points lead with Anderson in second and their KB racing teammate, Bo Butner is third. 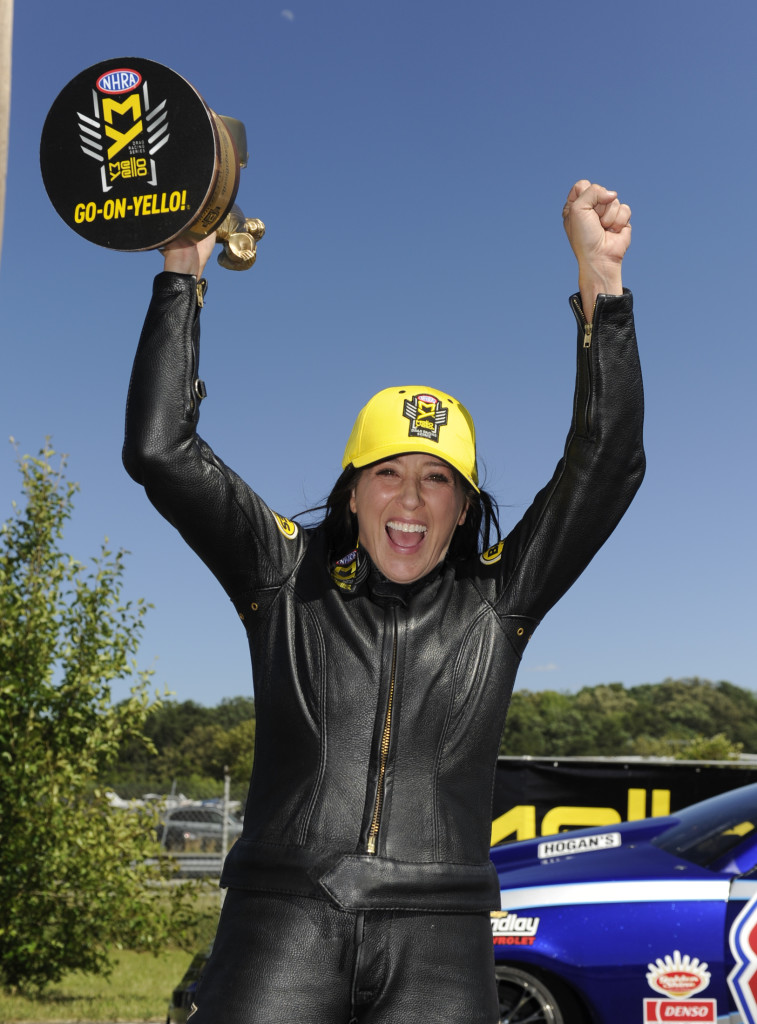 Angelle Sampey had a special incentive to win the Summernationals in the Pro Stock Motorcycle division and that was her five-year old daughter, Ava, who has never seen her mom win a National event.  It’s been since Houston in 2007 that Sampey won her last Wally.  On Sunday, she outdrove the entire class on her way to the winner circle for her 42nd win.

The three-time champion raced Michael Ray before tackling the Harley’s of Andrew Hines and Eddie Kraweic and reaching her 70th final round against fellow Louisianan, Jerry Savoie.

She left nothing to chance with another remarkable .002-second reaction time and with massive crosswinds; Sampey had to adjust herself on her bike the entire way down the track to compensate.  Tears filled Sampey’s eyes when her win light came on running a 6.876, 194.41 against Savoie’s 6.928, 177.21. 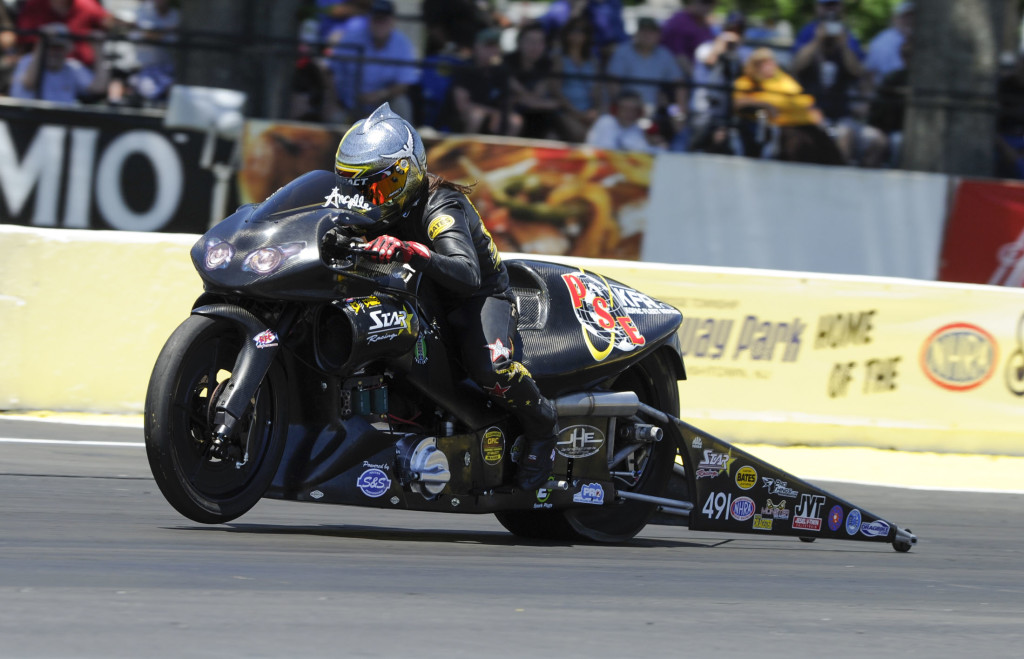 “I probably looked like a crazy person at the top end when I won,” Sampey said with happy tears streaming down her face.  “I told my crew chief to check everything on the bike because I was jumping up and down and punching it; I couldn’t calm myself down to take off my helmet.  I know this is my 42nd win but it feels like my first ever.  I don’t feel like I’ve had any wins before today.”