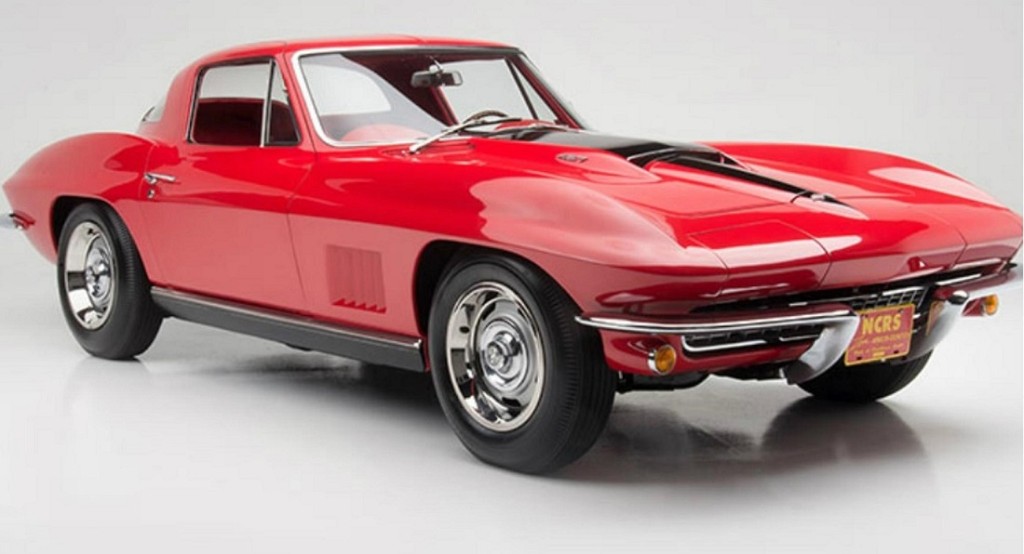 The L88 option was a Corvette racing package legendary for dynoing at way over its advertised horsepower rating. Only 20 L88s were built in ’67 and their actual output was close to 560 hp. The special competition-oriented 427-cid L88 V-8 was also significantly different from other 427s. It had a forged and Tuftrided crankshaft, 12.5: 1 pistons, an 850cfm four-barrel carburetor, aluminum cylinder heads and a cold air induction.

Corvette chief engineer Zora Arkus-Duntov supervised creation of a prototype L88 in 1966. He approved it for limited sales to racers in 1967. The Barrett-Jackson car is the only L88 coupe known to have won the Duntov Award that recognizes individuals for restoration and preservation of 1953-1974 Corvettes. To win this honor, a car must score at least 97 points in National Corvette Restorers Society judging, undergo a rigorous test of mechanical components and do so at a set number of regional and national judged events.

The auction car has the full L88 racing package with heater defrost delete, special front and rear suspensions, positraction, special heavy-duty vacuum power brakes, transistor ignition, 427-cid V-8 and M22 heavy-duty, close-ratio Muncie four-speed gearbox. It also has racing shoulder belts and a special order 4.56:1 rear axle. A GM executive originally ordered the car for a friend of his son. It was delivered by Savoie Chevrolet, a dealer that sold GM employee purchase program cars. The dealership was a year old when it delivered this L88.

The car has an extensive competition background. The first owner raced it at drag strips around Detroit. It made several appearances at Motor City Dragway, Lapeer Dragway and Detroit Dragway in the late 1960s. This L88 was also used to test competition camshafts for the General Kinetic Camshaft Co. Local legend is this car never lost a race at the local drag strips.

Following its racing days, the car was sold to a high school auto shop teacher who discovered competition features He contacted GM engineer Werner Meier who encouraged him to check the gas tank sticker that proved the car was an L88. Collector J.D. Pervis then bought the car. Pervis found the car’s original engine had been replaced during its racing days and he acquired a date-correct L88 IT motor from GM. The car was not completely restored until the late ‘90s, when Ray Norvelle bought the L88 and commissioned Nabers Bros. of Houston, Texas to do a full restoration. Norvelle sold the restored car to its current owner in 2000. It has been maintained by a GM mechanic and carefully stored.

Corvettes with the L88 package were clearly designed for use on the track and GM discouraged street use. In addition to the brute engine the legendary M22 4 speed “rock-crusher” transmission was required as well as a performance suspension and brakes. Using these cars as daily drivers was not only discouraged but also challenging since they would overheat in stop and go traffic since they were delivered with no fan shrouds. In addition, choosing the L88 RPO also required deleting the radio and heater.

“There’s no telling where the bidding will end when the hammer falls on the L88,” Craig Jackson said. “The sale should be exciting for ‘Vette enthusiasts.”