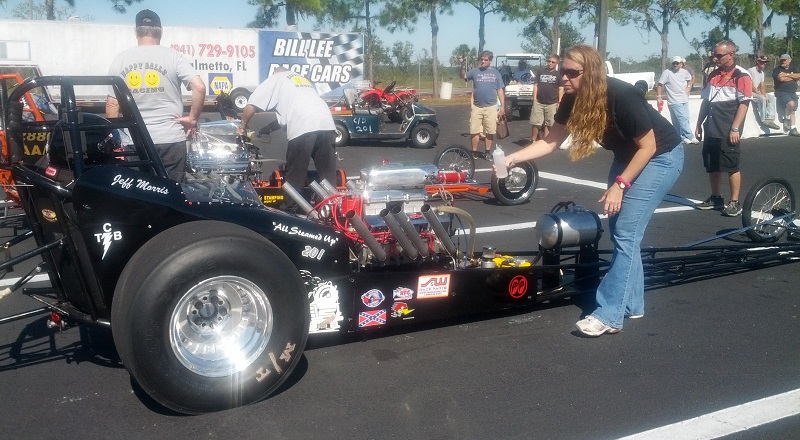 Jeff Morris loves to drag race. A locomotive engineer who works the night shift during the week, Jeff tends to the needs of his wife and family when he’s home, but Morris and his wife of one year, Robyn, get to the track as often as they can. Robyn had no idea what a dragster was when she met Morris several years ago. Today, she and his long-time racing friend Doug Miller make up his devoted pit crew.

“Robyn is my right-hand helper. I love being at the track with her,” said Morris. So much for the people who said he’d be selling his dragster when they got engaged.

The 37-year-old Morris always knew he wanted to work for the railroad. He began his career at age 19. It took him a while to get interested in drag racing though. He worked on engines with his father, a drag racer and mechanic, as a youngster, but it was Morris’ first car, a 1989 Mustang got him thinking about the racing at the drag strip.

“I did a little street racing and got run off the road before I realized I needed to do my racing at the track,” he explained.

Morris sold the Mustang and bought a 1972 Nova with a 350 engine. It wasn’t very fast so he took it to car shows on the weekends he wasn’t working with his father to “soup up the engine.” The car didn’t really fly on its first trip down the quarter mile track at run at Bradenton Motorsports Park, but it did light Morris on fire for racing.

“Once you go down the track, you begin to search for the fastest time you can get until you run a 0.0,” he said.

Realizing this need for speed, Morris bought a ’67 Nova and a house with a shop on the side so he could work on it.

“I tore everything out of it and installed a roll cage, a used stock GM block, and crank rods. My father and I stroked the engine from a 350 to a 383 and it ran for a year before spinning out the bearings,” said Morris. “I turned a 12:40 in that car.”

Still, that was not fast enough, so the ’67 Nova got a make-over with upgraded parts, including Eagle crank rods and SRP pistons, which are now in his front engine dragster. Slowly but surely the car ran faster, eventually turning a time of 10:86. The racing was all test and tune, though, because his times were not good enough to enter the bracket races.

“I started to get tired of it,” said Morris.

However, he was not too tired to go onto RacingJunk.com to sell the ’67 Nova and start looking for a front engine dragster (FED). As he searched for the right car, he learned about the Southern Slingshots, a group that is dedicated to the preservation and promotion of the original dragster. Whether they drive short-wheelbase altered or longer FEDs, the group’s members strive to bring nostalgic racing to the current generation of racing fans. The Slingshots other main objective is to have fun. After talking to a club member, the light at the end of the FED tunnel got even brighter for Morris. 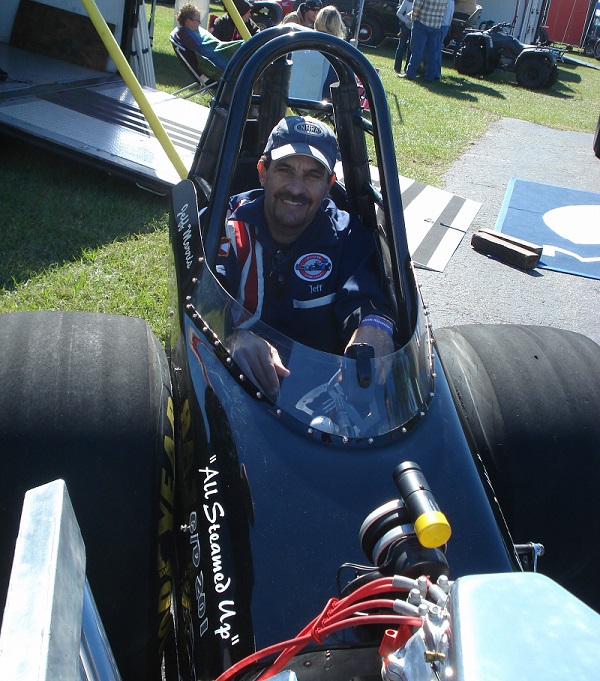 “He said once I got my car I could go with them anywhere to do exhibition racing, which meant traveling out of state, getting treated well at the tracks and enjoying good parking spaces so people could easily take a look at the nostalgia dragsters,” said Morris.

While he did not really know much about dragsters, Morris eventually was united with his FED through the magic of the Internet in the fall of 2008. He and his father drove up to Maryville, Tenn. to get it. His 6 ft. 200 lbs. frame made the car a snug fit, but Morris knew it was the one. They towed it back to Florida and Morris put his own small-block Chevy engine into the narrow chassis. He got it moving up and down the driveway in about a day, but did not get to the track for another month.

Meanwhile, Morris had to learn how to do burnouts and drive and turn the dragster. He took it to Gainesville and turned a 9:02 before he was told he’d have to have his NHRA license to make another run. Morris finished getting his license at Thunder Valley, Bristol, Tenn. in 2009.

“Doug and I had a good time and we used up 100 gallons of gas getting me licensed, but I had a sense that this new car was going to be a lot of fun if we could get to the races without going broke,” said Morris. “Since 2010, we have gone to Virginia, North Carolina and South Carolina about six times and had a blast with it.”

Also in 2010, Morris switched the dragster to the Slingshots’ fuel of choice, injected alcohol and a mix of 25% nitro/methane all the time. The car started turning in times of 8:16 at 161 mph. He currently runs the dragster on 100% methanol.

While he didn’t sell his car when he got married and became a father, Morris did let go of the need for more and more speed.

“I have a family to take care of and this is dangerous enough,” he said.

Today, Morris does all his racing with the Southern Slingshots, except for an occasional Test & Tune. The name of the game is pleasing the crowd.

“I’ve been to 15 or 20 different tracks, but I’d rather go to a local track any day,” said Morris. “The best part of driving a dragster is getting in the car, firing it up and seeing people lined up along the fence and in the stands who are there to see you entertain them.”

Driving a nostalgia car also makes racing his FED extra special. Realizing that the dragster had to be more than 40 years old, Morris searched for the man that built it. He found Ed Mabry online, who was building land speed motorcycles in Arlington, Texas.

“I’m so glad we got to touch base and I got to e-mail him some pictures of the dragster,” said Morris. “My car has a life and its own story. It’s probably been from one coast to the other and could tell some interesting tales.” Mabry has since passed away, but his work has left a personal legacy for Jeff Morris and his family. 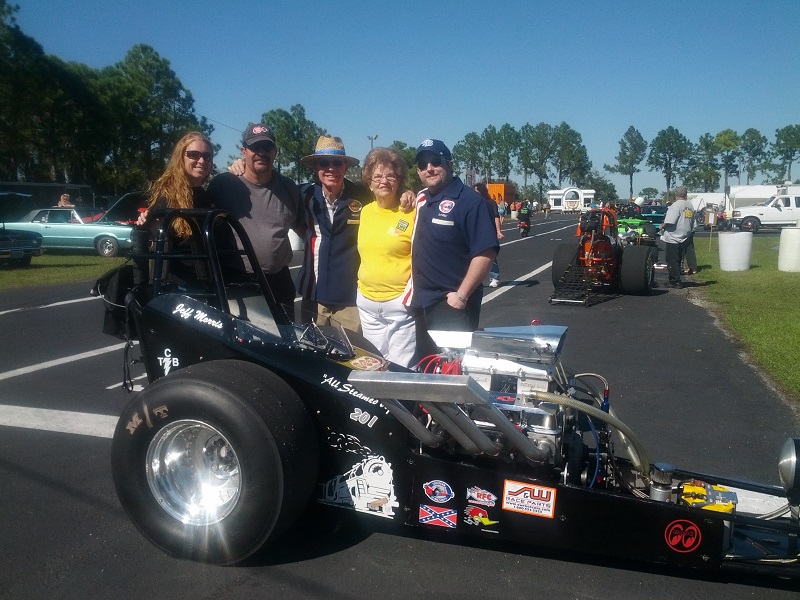