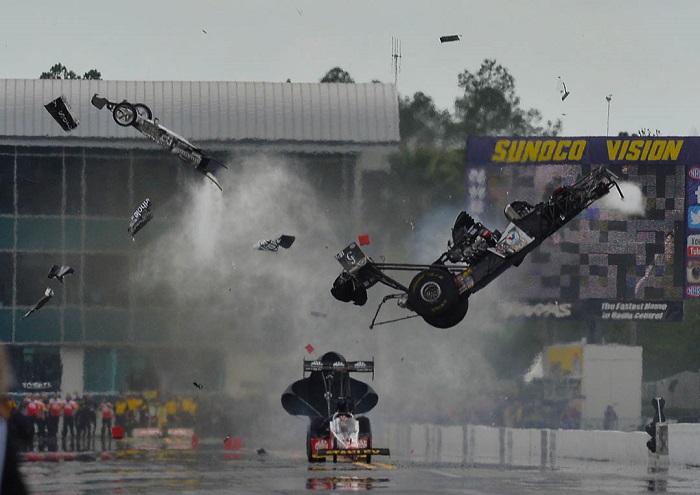 Story Via Competition Plus

Drag racer Antron Brown has been involved in some nasty crashes, many of which he escaped relatively unscathed thanks to the canopy that many had criticized and doubted. This has many in the drag racing community questioning whether the canopy would have helped prevent Justin Wilson’s fatal on-track incident. Neal Strausbaugh, U.S. Army Dragster assistant crew chief, is the right-hand man to crew chief Mike Green, who oversaw the canopy project at DSR and worked with Indianapolis-based canopy manufacturer Aerodine Composites.

“You could tell it had been severely hit but not compromised,” Strausbaugh said of the canopy after Brown’s crash. “It didn’t tear a hole in it. It worked flawlessly. It took us awhile to figure out what it hit. Antron will tell you he never saw it, never heard it, never knew any of it.

“We only knew it from video, and it was very, very difficult to see in the video, because it happened so fast,” he said, adding chances were great that without the cockpit cover, the double-edged dagger of the sheared-off wing could have reached Brown with disastrous consequences. Strausbaugh wants the IndyCar Series community about the 11-pound fire-suppression and the fresh-air systems necessary with a canopy.

It will most likely be a very long and complex road for immediate changes to happen to Indy Car, but perhaps NHRA experts can lend some help that will be effective in the long run.