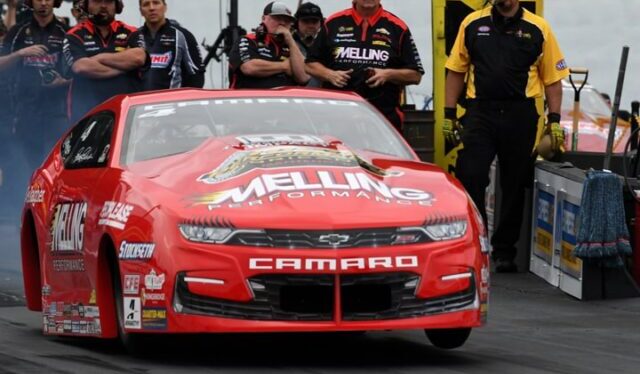 The drama in NHRA’s Pro Stock Mello Yello division is looking to upend itself over the next three races, with just over five rounds of racing separating first through sixth places in the Countdown to the Championship standings and the driver who looked impotent as the regular season drew to a close looking far less like a shoe-in as he did earlier in the year.

For the first time this year, Pro Stock is running 18, rather than 24 races and it’s brought some part-timers to compete against a regular cache of about 14-15 drivers. Unfortunately it hasn’t brought many manufacturers to challenge Chevrolet, whose Camaro body has been the winner of each and every race held thus far in the season. It’s fair to say that the Dodge Dart runners and the occasional Ford Mustang entry have been field fillers and easy to dismiss. 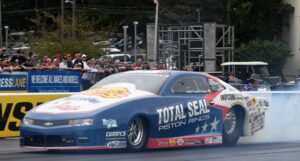 Until last week, that is, when Alan Prusiensky’s Dart took a wild ride that made him, for the first time a highlight reel. Not one he wanted to be, obviously, but since wild rides like the one Prusiensky endured at zMAX Dragway aren’t usually seen in this class of racing, it made more than a few eyes open wide and gave him some unwanted notoriety.

Because of the wreck, Prusiensky won’t be racing at this weekend’s 44th annual AAA Texas NHRA FallNationals, but there will be another Dodge Dart in his pit space. Richie Stevens Jr., who hasn’t raced in NHRA’s Pro Stock class since 2017, will compete in a TopCoat Dodge Dart owned by Prusiensky.

Obviously excited – and a bit hesitant about any racing rust that might have accumulated in more than two years out of the Pro Stock driver’s seat – Stevens Jr said he simply wants to “have some fun and give Alan and his team some good runs to build data off of for future races. I appreciate him giving me the call and opportunity to sub for him.”

NHRA is happy to welcome Richie Stevens Jr. back into the fold, but the real action is in the 10-driver Countdown to the Championship as this second consecutive Countdown contest begins the second half of the six-race playoffs. With Stevens Jr.’s wife, Erica Enders at the top of the heap, thanks to her consistency in these last three races where Enders has earned three straight No. 1 qualifying results and earned a single win, the two-time champ is now 38 points ahead of Jason Line. 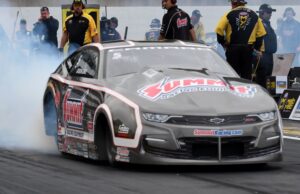 The Enders-Line battle is one between Elite Motorsports and KB Racing, but with Matt Hartford just a single point behind Line and regular season marauder Bo Burner just 67 points back, none of these drivers can look forward to an easy run at Texas Motorplex. Last week’s winner at zMAX, Deric Kramer holds fifth place and is 88 points behind Enders, while her teammate, five-time Pro Stock champ Jeg Coughlin Jr. is 111 back.

Peaking at the right time after a roller-coaster regular season, Enders’ St. Louis victory, three final round appearances in the last five races and those three No. 1 qualifiers have her looking forward to returning to her home state. A win in Dallas would help cement her hold on the points lead and, with only Las Vegas and Pomona left to run, “It’s really exciting,” she said.

“I would never have guessed we would be in this position with the start we had, so I’m very pleased with where we’re at. My goal going into Charlotte,” Enders noted, “was to leave with the points lead. The second part of that goal is to never give it back so we’ll do our best to keep it.” Enders has had good luck at the Texas Motorplex track including a 2015 victory, and would love to pick up the track’s cowboy hat and belt buckle winner’s gifts, in addition to the traditional Wally trophy.

To this two-time Pro Stock champion, “This Countdown feels like 2014 and 2015 to me,” Enders said of her title years. “We’re back in championship form, so it’s big to have that mindset where you don’t back off or don’t let your guard down. It’s all mental and that’s the most challenging aspect of all. The biggest thing is to stay positive, keep our focus and not let any distractions in… but there’s a lot of racing left and lot of heavy competition out there.”

The weekend’s racing schedule, expected to be held under mostly clear and warming skies, features late afternoon and early evening qualifying on Friday with action just after noon and in the late afternoon for Saturday time trials. Eliminations on Sunday begin at 11am.