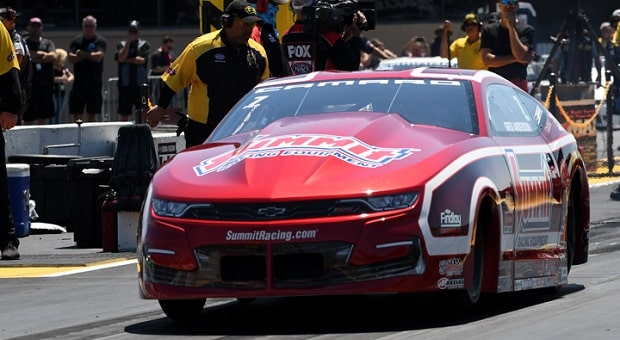 Greg Anderson’s famous mustache hasn’t really been in an up-turn for, oh, a little more than a year. While the four-time NHRA Pro Stock driver’s champion has been competitive since he earned his 91st category win at the Mile-High Nationals in 2018, it took a year to get his 92nd Wally winner’s trophy at the same track. And only a week to get No. 93 in the 32nd annual Sonoma NHRA Nationals.

“It’s been a long time since I’ve won two races in a row. When you have a gap like that between race wins,” Anderson acknowledged, “you start to doubt yourself, if you can still win. You’ve got to find a way to get that right, and without a doubt, the older you get, the harder it is to keep in check. The harder it is to make sure you’re sharp.”

The 58-year-old Minnesota native has the opportunity to be first to sweep NHRA’s tough Western Swing since Don Schumacher Racing’s Antron Brown achieved that distinction in 2009, driving a Top Fuel dragster. Anderson, who races the red Summit Racing Chevrolet Camaro, has a chance to sweep the swing with a third straight victory in Seattle this weekend.

After vanquishing No. 1 qualifier Alex Laughlin, who drives a Camaro from the Elite Motorsports stables, Anderson said, “I’ll go into Seattle with a smile on my face, eager to race, and see if the cards fall the right way again. I had a lot of luck [in Sonoma], don’t get me wrong, and it takes a lot of luck to win one of these events. I didn’t make the big mistake and other people did. Some way, I found my way to the winner’s circle.”

Anderson’s duties at Summit Racing encompass way more than driving his Pro Stock Camaro race car 18 times each year. He’s also a crew chief and engine builder and does management chores. He can often be seen in the pits working on other cars in Summit Racing’s customer base. But even though he’s won titles as a crew chief for The Professor, Warren Johnson, he always vies for that yellow winner’s cap. 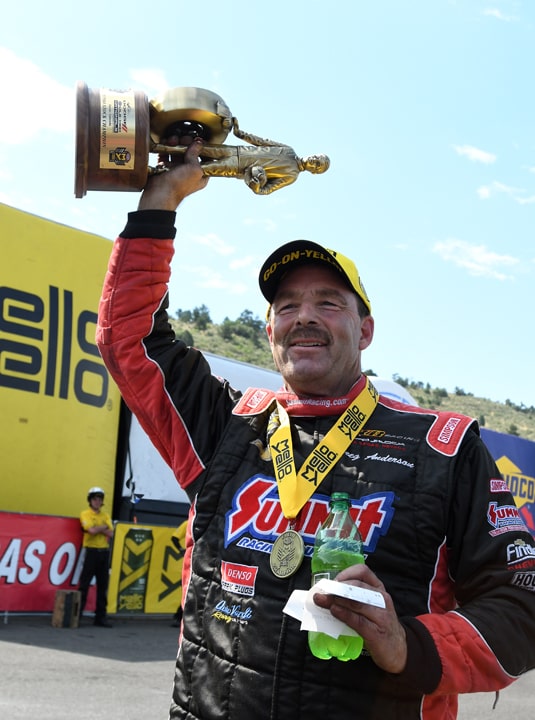 In Pro Stock, everything – yes, everything – has to go right to turn on a win light. With all of the competitive cars belonging to a single manufacturer, Chevrolet, it seems every team and driver has the opportunity to win a round. And with usually half the field buying equipment from either Summit or Elite, races are decided by thousandths and hundred-thousandths.

Anderson earned his first round victory in Sonoma against Kenny Delco, who recovered nicely from his massive accident last week at Bandimere Speedway – which he said was mostly cosmetic – with an 11th place qualifying run in an over-subscribed 20-car field. Anderson earned the win light with his 6.570-sec pass at 209.52, enabling him to meet Jeg Coughlin (Elite) in round 2. When Coughlin broke on the line, Anderson took low ET of the round with his pass of 6.568 sec at 208.71, the latter Pro Stock top speed of race day.

Into the semifinals, Anderson had to race teammate Jason Line. A .022 reaction time aided Anderson’s climb to the finals where he knocked out Laughlin who, like Coughlin, broke on the line, giving Anderson a second single-pass down the quarter-mile strip. Anderson clocked a 6.602, 208.71 to take home the Wally winner’s trophy.

As he catapulted to second in points, with three races remaining before the six-contest Countdown to the Championship, Anderson said, “This feels great. It’s going to do a lot for me, not only winning last week but winning two weeks in a row. It not only proves to me I can still do it, but it tells you that you still want to do it and how much fun it is – and why you do it.”

The Western Swing is tough, and for that reason among many, not all, of the Pro Stock competition opts for all three races. There are only 14 cars on the current entry list, but that might change between Monday and Friday. The NHRA Northwest Nationals at Pacific Raceways in Kent, Washington, are scheduled to take place August 2-4 and cap the Western Swing. 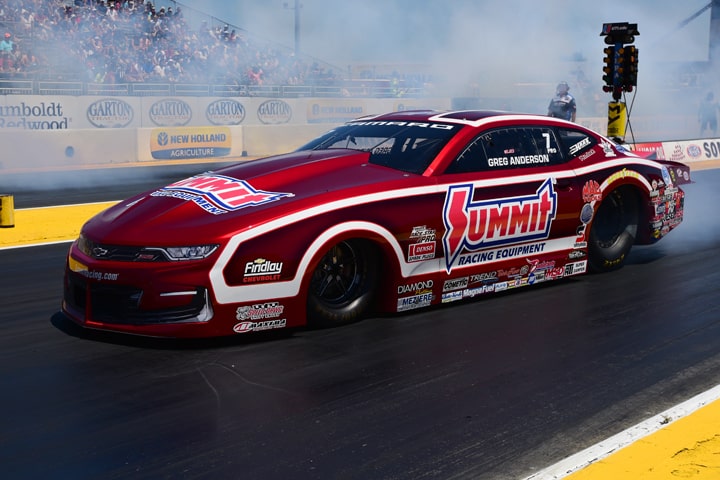