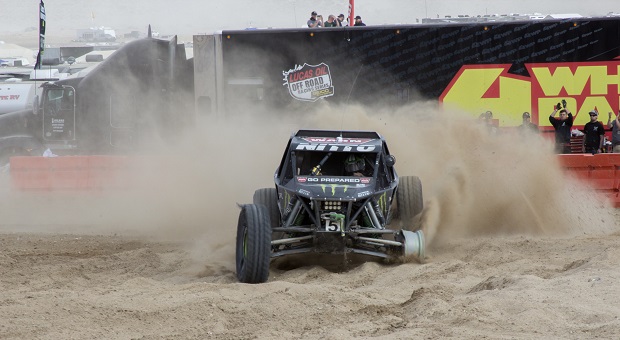 There has never been a three-time champion at the Nitto Tires King of the Hammers, powered by Optima Batteries. There has never been a father-son one-two either. However, Shannon and Wayland Campbell proved there’s first for everything after taking home one-two at the 2017 King of the Hammers. It was also a big day at Nitto, as first through sixth place were wrapped in their Trail Grappler MT tires. However, with great results comes some heartache, and none more than for Tom Wayes. Domination gave way to a breakage, but that’s how the Hammers goes.

Wayes started out with early domination on the February morning. When it comes to Ultra4 racing, he’s always a fun one to watch as he puts it all on the line every lap. Guess it comes from his background as an Alaskan heli-ski guide. However, that pushing usually comes at the price of mechanical failures when he’s in the lead or close to it. This year, it was Spooners that got him, although he felt that he wasn’t even close to beating on the car.

“I got into that notch and broke the rear driveline – spit the rear yoke right out,” said Wayes. “That was the demise of it all. I couldn’t winch forward and then when I tried to change the driveline it turned into a traffic jam.” While it was lead ending, it wasn’t race ending as Wayes finished 22nd out of 50 finishing entries. There was a total of 122 entries for the KOH.

Two women entered this year’s KOH: Bailey Campbell (daughter of Shannon Campbell) and Jessi Combs. Bailey, unlike her brother Wayland and father Shannon, used a solid axle Jeep style chassis. So far, she’s also the only female driver to have finished in the Top Five. She and Jessi have car building in common, as you’ll see her elbow deep in grease, just like Jessi and anyone else building their own rig. This expertise means that when something goes wrong, she gets out of the rig and helps get repairs done, as she had to do on lap two at the main pits when a right front knuckle issue had her held up on what started out as a great day. 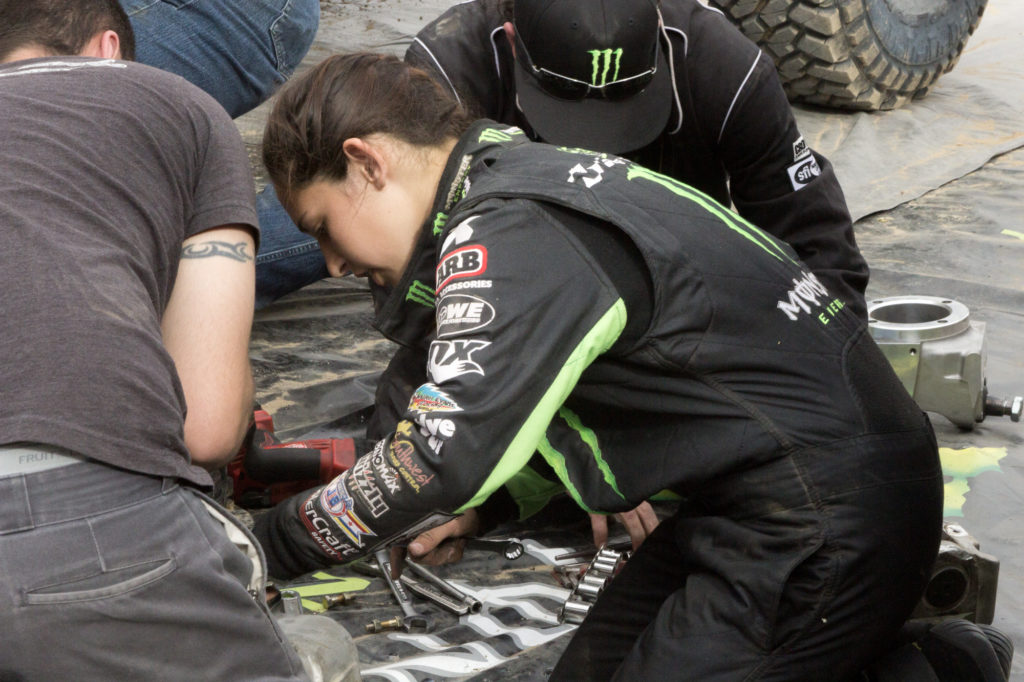 Jessi Combs had a rougher day, with dust preventing clear vision and then a roll on Backdoor.

“Just a tiny little mistake,” she said. “We’ve done Backdoor a hundred times; how we rolled I have no idea.” Fortunately, recovery was quick. “We were back on our wheels, got back into our pits. We ripped off our hood, filled up all the fluids and took off and didn’t have any problems since then.” Even with these troubles, Jessi started off in 49th position but finished a solid 12th place, while Bailey started in 25th and was able to bring home a 26th place.

The Campbell boys, though, were the ones to talk about. After Wayes broke, it was between them and Jason Scherer. Only three-minutes separated Scherer from Shannon all the way to the finish, but it was a race between father and son for the overall with only 28 seconds between them on time, and less than that on track. Wayland would end up finishing physically ahead of Shannon, but in time, Shannon Campbell would become the first ever three-time King of the Hammers. We believe this is also the first ever father-son one-two at the big race; however, they did pull off another one-two earlier at the King of the UTVs race, with Shannon coming in first in that race as well.

“The best thing,” Shannon said, “was Wayland didn’t give me one bit and I wasn’t going to give it to him either. I’m more proud of this guy than winning. The last 15 miles that we battled made my day.” 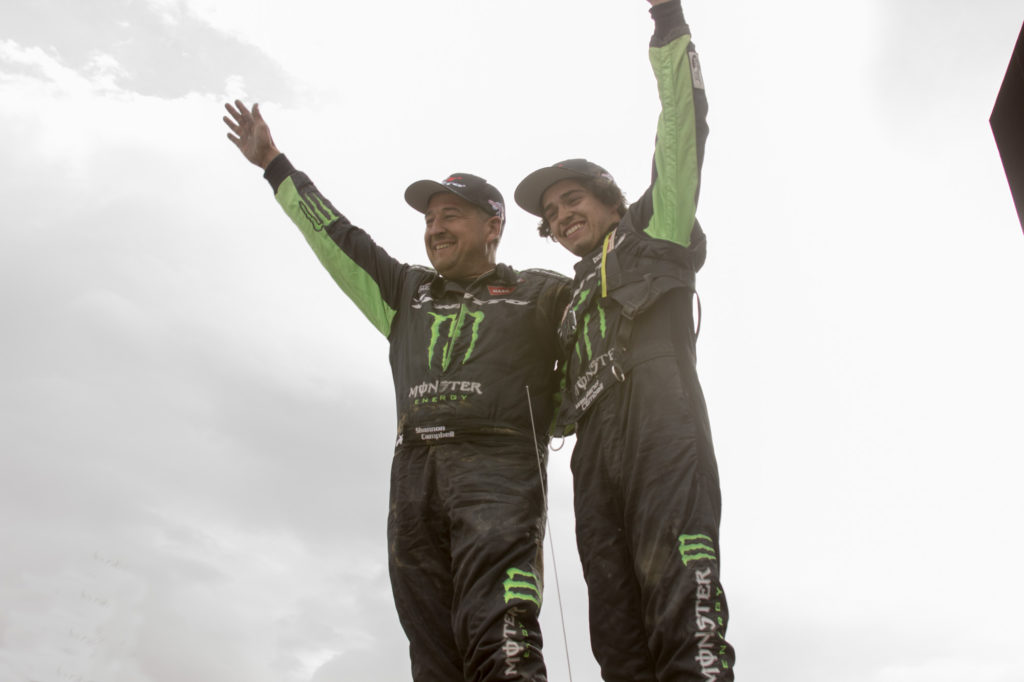 What was Wayland’s secret to taking a close finish this year to his dad? “The UTV race just made me see things even more,” he said. This applied especially when he made the pass on Jason Scherer on Chocolate Thunder. “It was a UTV line that I took on Wednesday and I noticed Jason didn’t take it. So, I thought ‘here we go, this is my chance.’ I didn’t think I was gonna get another one. And me and him went back and forth all day long.”

Jason Scherer has been at the King of the Hammers since 2009 but hasn’t had a win since then. Last year he came close with a second-place finish, but this year was his first time with a co-driver. “We were racing door-to- door for 181 miles of the hardest rock trail in the world,” he said. “We never had a chance to take a deep breath. Sure, I wanted to win, but it was a great feeling to keep the car together.”

This has been, quite honestly, one of the best King of the Hammers we’ve ever been to. One of the closest finishes, first ever three-time king, first ever father-son one-two, six places that went to Nitto Tires and the top three were all IFS cars. There is still the rest of the Ultra4 season to go, with the next Trail Gear Western Regional coming in April in Sierra Blanca, Texas and the 4WD Hardware Eastern Regional in May at Davis, Okla. It won’t be long until the National Championships at Reno, Nevada. It will feel like less time when we’re back at Johnson Valley for the 2018 Nitto Tires King of the Hammers powered by Optima Batteries.