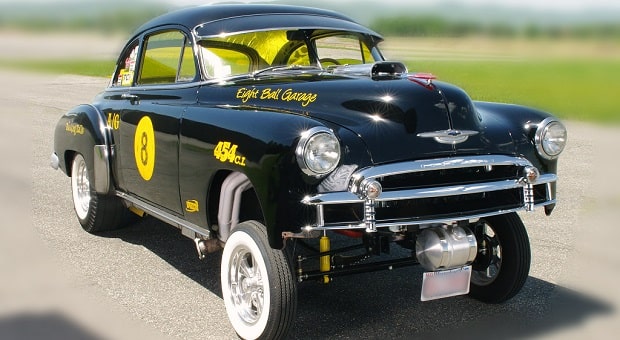 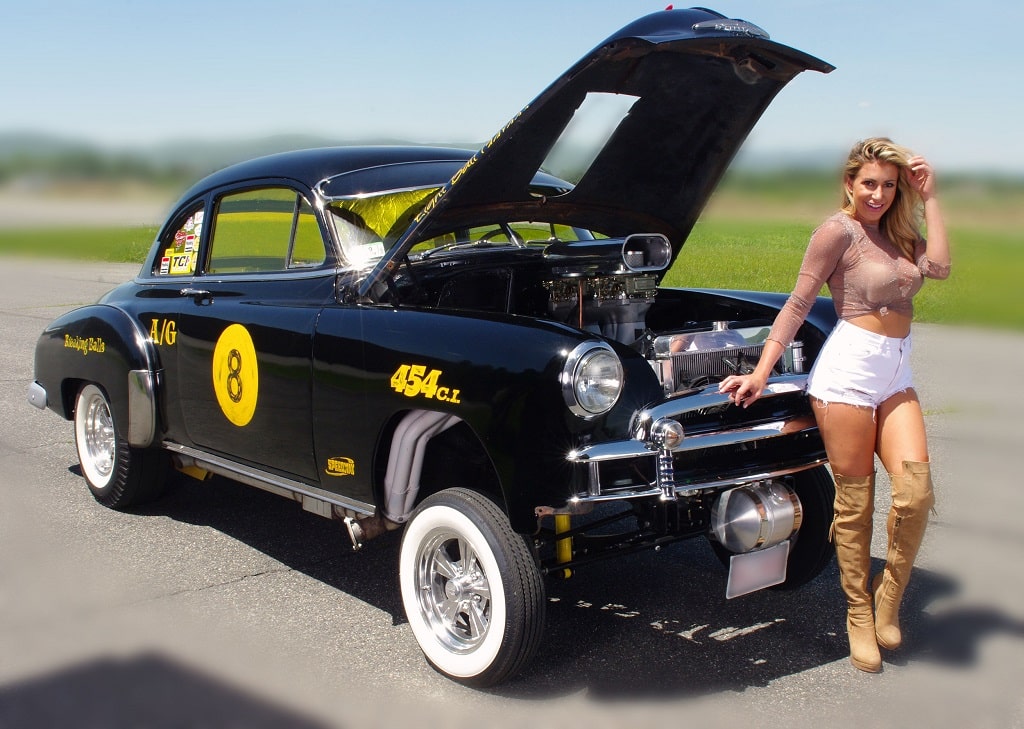 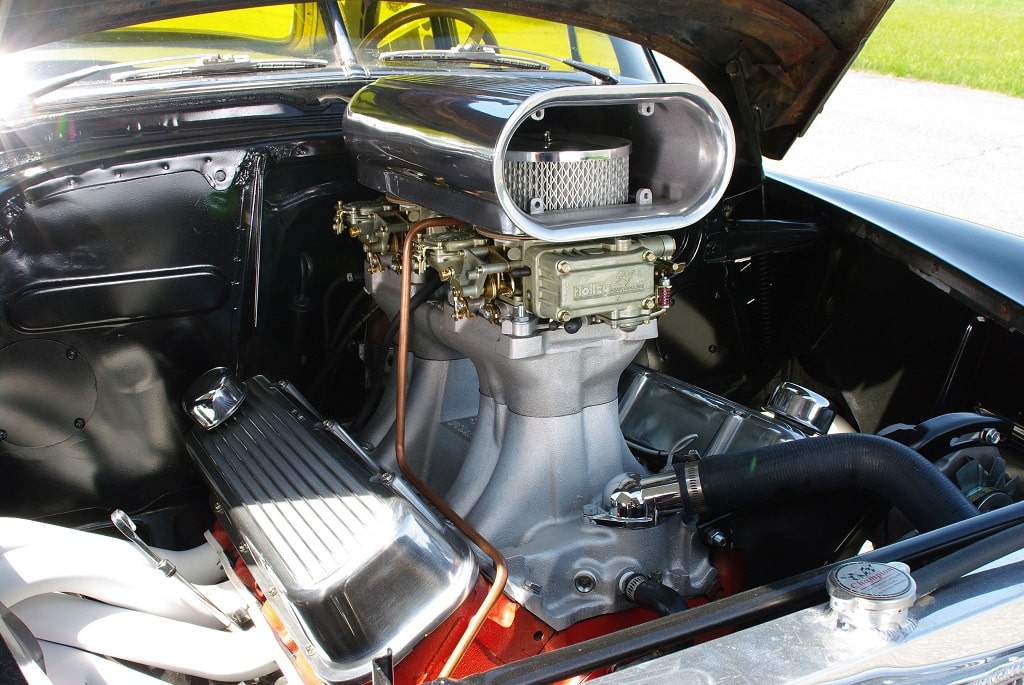 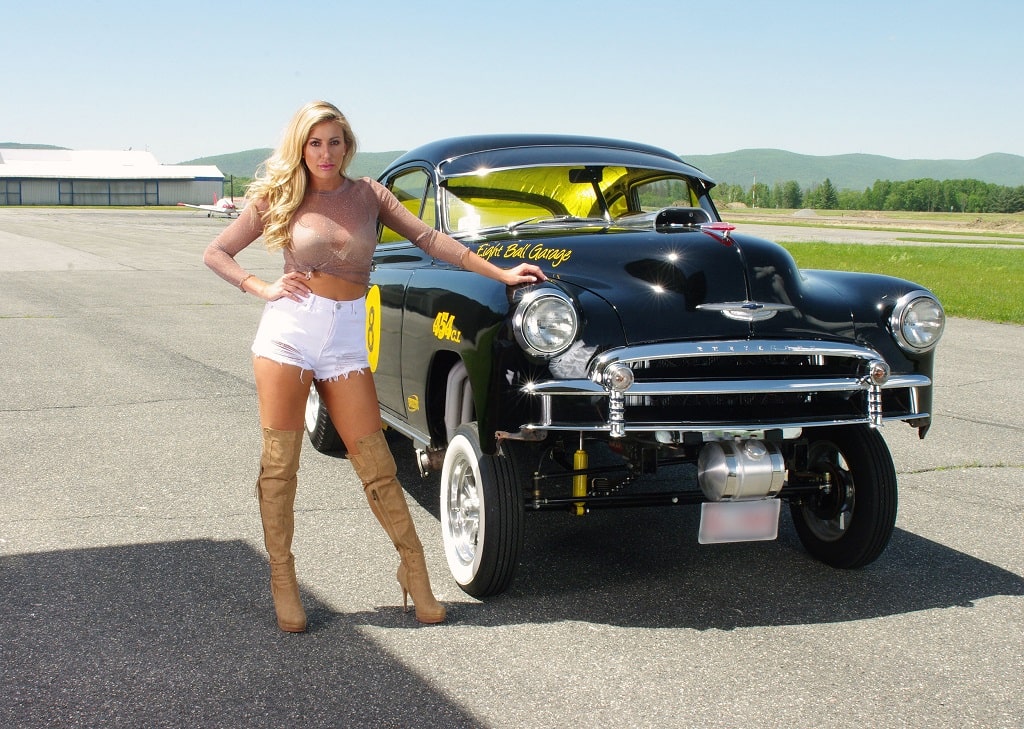 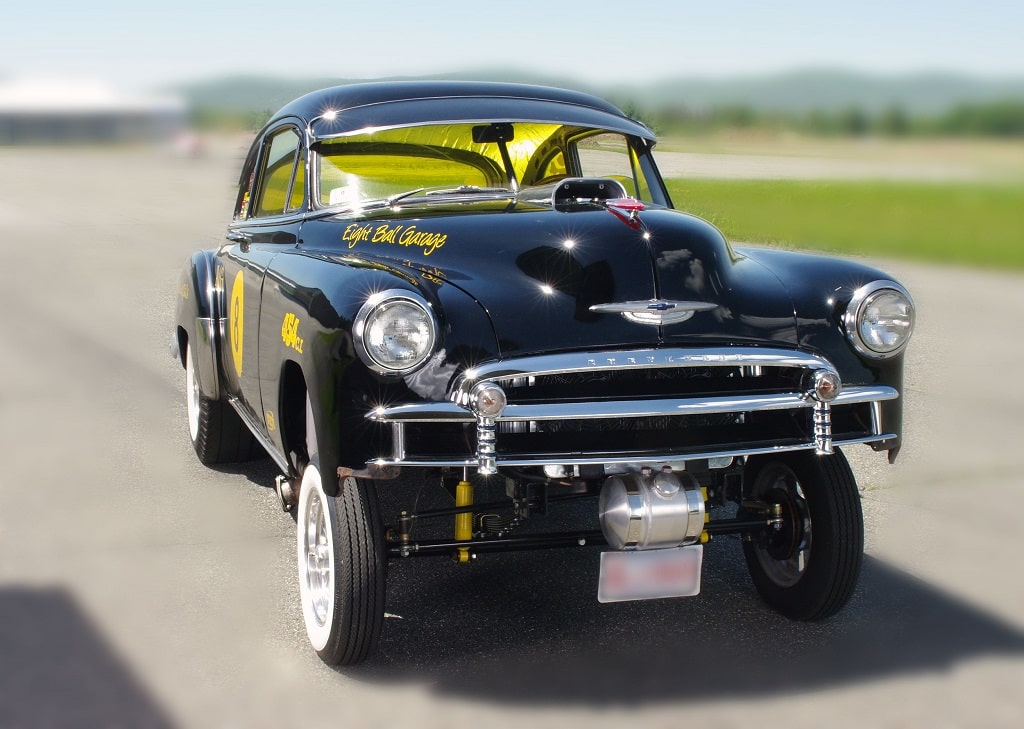 Shining bright in the January shot for our 2019 calendar is Vincent Paris’ 1950 Chevy Styleline Gasser. Browsing online ads one night after a long day’s work and self-admittedly a few adult beverages, Vincent came across the original Styleline just a short drive away from him in New Hampshire.

He put in a bid and won on a good deal. The foggy side windows, cracked wing windows and unsalvageable interior were not enough to deter Vincent. Instead of focusing on the flaws, he looked at the car overall: It had Baby Moon Rims with new Black Walls and wheel skirts. Dropping under the car, he noticed a solid undercarriage, a new driver side floor panel, solid brazing and competent workmanship. That was enough for Vincent. He paid the owner and brought the car home.

Vincent impulsively lowered the Chevy the first week he owned the car but was not satisfied, finally deciding to go old school and turn the car into a Gasser. Remembering a Chevy Factory Monster LS7 454 engine he saw on RacingJunk Classifieds, Vincent searched quickly back only to find that specific motor had sold a few months prior.

Hooked on the motor for his vision, Vincent found another one listed in New Jersey from a fellow Hot Rodder. Pulling the plug on all of his builds, he hopped in his truck and headed to New Jersey. Vincent purchased the motor and added a Tunnel Ram with Fender Well Headers. To back up the motor, he added a B&M Street Fighter Turbo 350 transmission with a 3000 stall converter. Attached was a Currie 9” Ford Rear End with a 3.55 Posi he found online. He also added Slapper Traction Bars and a Speedway Straight Front Axle Kit.

With the meat of the car finished, Vincent started deconstruction on the exterior of his newly forming Gasser. Cleaning, fabrication, painting and a lot of reassembling followed. He added Rocket Racing Wheels with Firestone Cheater Slicks in the rear. Hand painted old school graphics went up on the sides and hood and his old school drag car was complete.

The build took about six months and, with a lot of help from good friends and the support of his wife, the car made it to the Lake George Adirondack Nationals. When asked how it drives, Vincent stated, “It goes sideways all the way up the road with white smoke everywhere. A real handful but a blast to drive!”
Back to Post