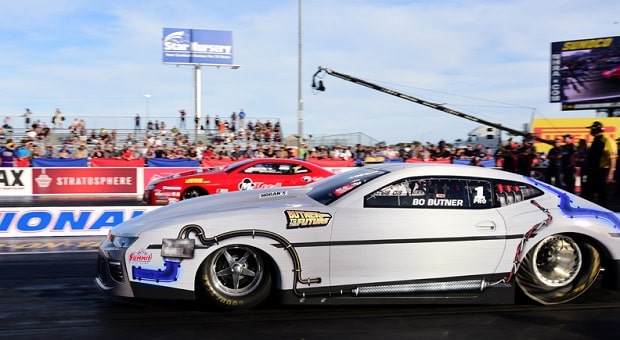 This could go down as one of the shorter retirements in NHRA Pro Stock racing. Shortly after 2017 class champion Bo Butner announced his decision to step away from the class, NHRA made their decision to lessen the number of Pro Stock races from 24 to 18. That change caused Butner to have second thoughts regarding his decision.

While the Indiana resident and businessman declared an intention to return to his Sportsman roots and spend more time with his growing family, the sanctioning body’s decision made him think twice and plot a return to the factory hot rods. He renewed his commitment to competing in the SAM Tech Factory Stock Showdown with his Cobra Jet Mustang.

It was Butner’s mom, Dottie, who put the idea in Butner’s head that maybe his decision to step away from Pro Stock wasn’t the right way to advance his competitive juices.

“She shocked me and said that maybe we should keep doing this, and I told her I thought it was time go move on. We’d already been successful with the best team out there – but I did say I’d think about it,” Butner said.

After winning the penultimate race of what could be the last 24-race Pro Stock season at Las Vegas and making the Pomona quarter-finals, falling to squadmate Jason Line, Butner returned to Floyds Knobs, Ind. and discussed the idea with his son, JB Butner, general sales manager of Jim Butner Auto Group in Clarksville. JB and wife Elizabeth are expecting their first baby next April, and this child will be Bo Butner’s first grandchild, one of the leading factors in Butner’s choice to halt his Pro Stock racing career. 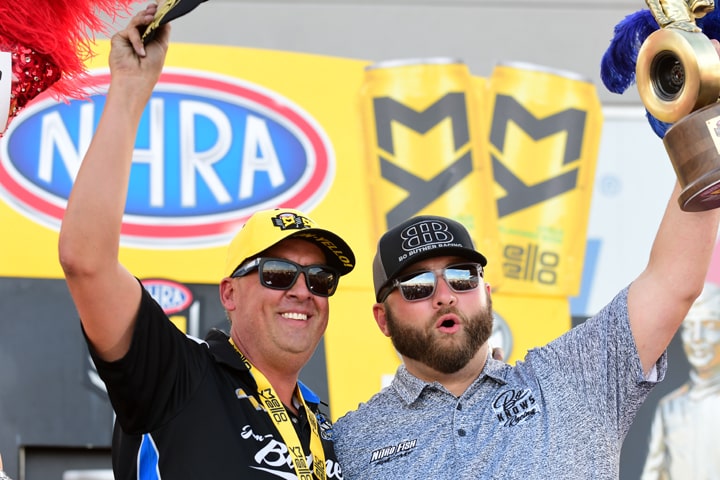 “JB runs the dealership, so it was important to make sure he was on board with it. And of course, when his baby is born in April, I want to be there for that, even if I have to miss a race,” he said.

Returning to Pro Stock with KB Racing was a natural for the racer, who counts all seven of his Pro Stock wins with the team.

“It tore at my heart to think about something happening to this class or it going away, and that’s another reason I wanted to come back,” Butner explained. “We sat down and talked with KB Racing on Sunday afternoon in Pomona. They were supportive and Ken and Judy Black (team owners) said any time I ever wanted to come back, I’m welcome. We’re all like a big family.”

Teammate Greg Anderson agreed: “Bo is like family to us and we’ve had a great run together the last few years,” since Butner joined the team at Gainesville in 2015.

“I think everything is going in the right direction with this team,” Butner stated. “Everyone at KB Racing is pumped up and working hard. I’m excited to get to it.”