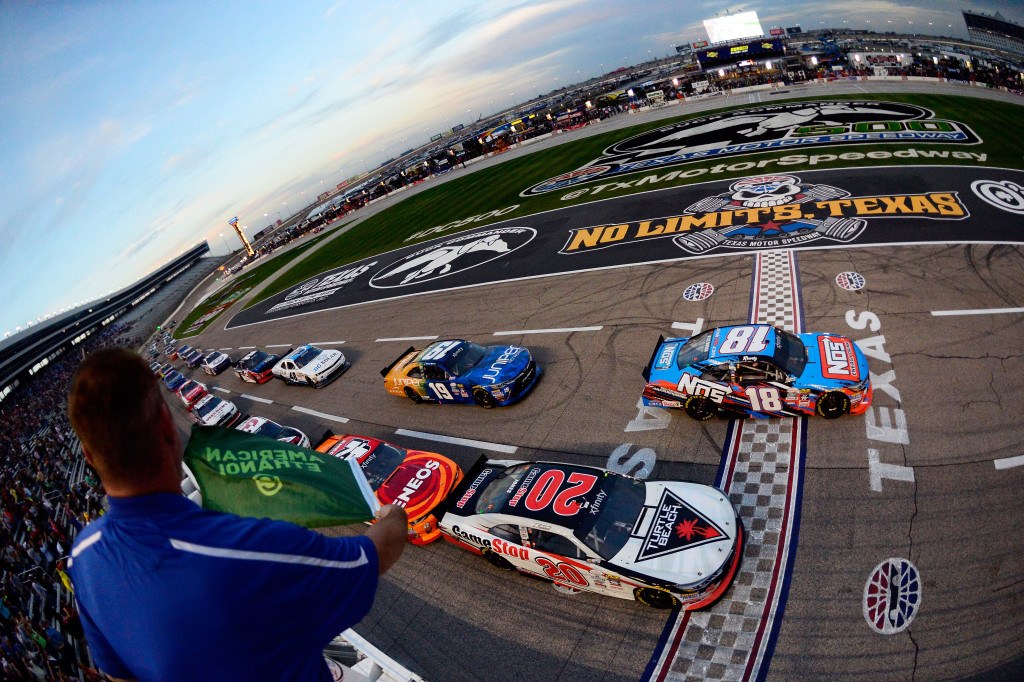 Although Kyle Busch led 151 of the 200 laps of the NASCAR Xfinity Series O’Reilly Auto Parts Challenge 300 at Texas Motor Speedway on Friday night, his NOS Energy Toyota team still had to make numerous adjustments to his race car in order to stay on top of the hard-fought competition to win his 80th race in the division.

The 30-year old native of Las Vegas now has eight NASCAR Xfinity race wins at Texas and his victory tonight gives him four wins in his first five races in the series this season.  It was also his 27th time winning from the pole position. 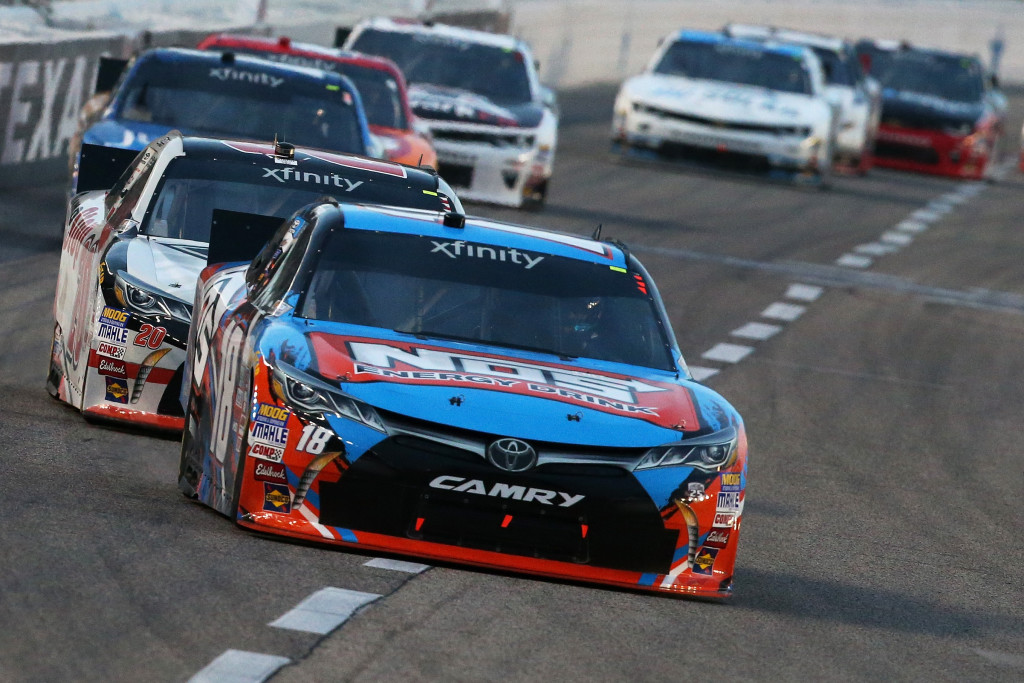 “Through the middle part of the race when Erik Jones caught me and later with [Kyle] Larson ahead of me, they were a little bit better at that point.  We had to fine tune and work on our balance a little bit.  We’ve had some really good runs here over the years, and we’ve been really fast.  This Camry had great speed tonight.

The race field stayed green the final 49 laps of the race with Busch leading the rest of the way.  All the racing action was from positions second to fifth, and it turned out to be a free-for-all with drivers like Kyle Larson and Ty Dillon, respectively, making hard charges to get up front before using up their tires resigning them to falling out of the Top 10.

The only one that did challenge Busch towards the end was his Joe Gibbs Racing teammate, Erik Jones.  He was dealt a major setback during the third caution on lap 77 for being penalized by NASCAR officials for his crew being over the wall too soon, relegating him out to the back of the pack on the restart.  He managed to battle his way back up front to finish second, losing by 3.055 seconds. 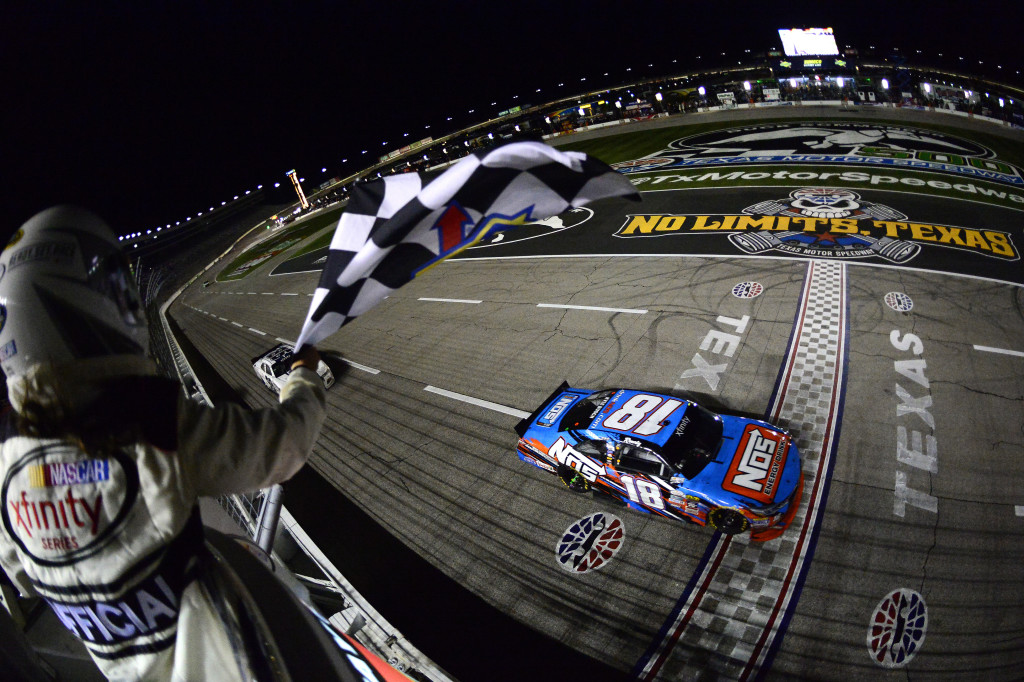 “Getting the penalty didn’t help but it wasn’t the reason we ran second either,” Jones said.  “We just didn’t take a big enough swing to free it up on the last pit stop.  The track just tightened up as it rubbered up.  Then it got slick again and we didn’t keep up with it enough.”

After Busch and Jones, the rest of the top five were Brad Keselowski in third, Chase Elliott in fourth and Dale Earnhardt, Jr. in fifth.

The average speed of the O’Reilly Auto Parts Challenge 300 at the Texas Motor Speedway was 141.121 mph.  There were five caution flags for 22 laps with six lead changes among three drivers.

Despite his 16th place finish after an early race spin, Daniel Suarez holds a one-point advantage over Elliott Sadler in the NASCAR Xfinity points standings.  Closely behind them are Justin Allgiar, Brandon Jones, and in fifth, Erik Jones. 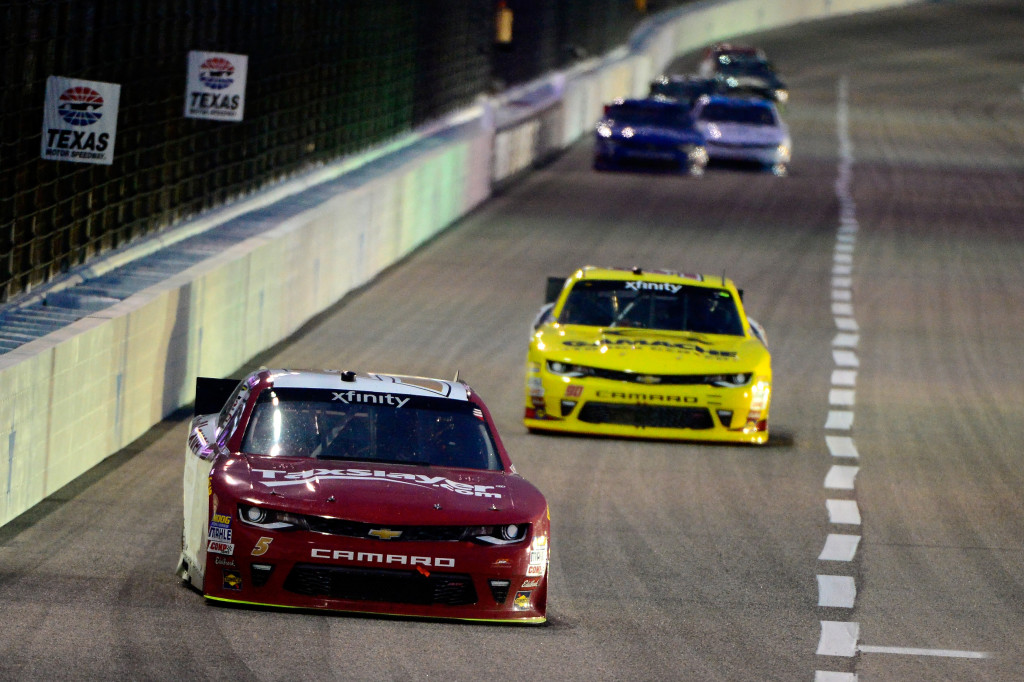 The next Xfinity race is on Saturday, April 16, for the running of the Fitzgerald Glider Kits 200 at the Bristol Motor Speedway.  The race airs on FOX Sports 1 starting at 12:30 p.m. EDT.  It is the first Dash-4-Cash race of the season and qualifying will include two 50-lap heat races to determine the starting line-up.