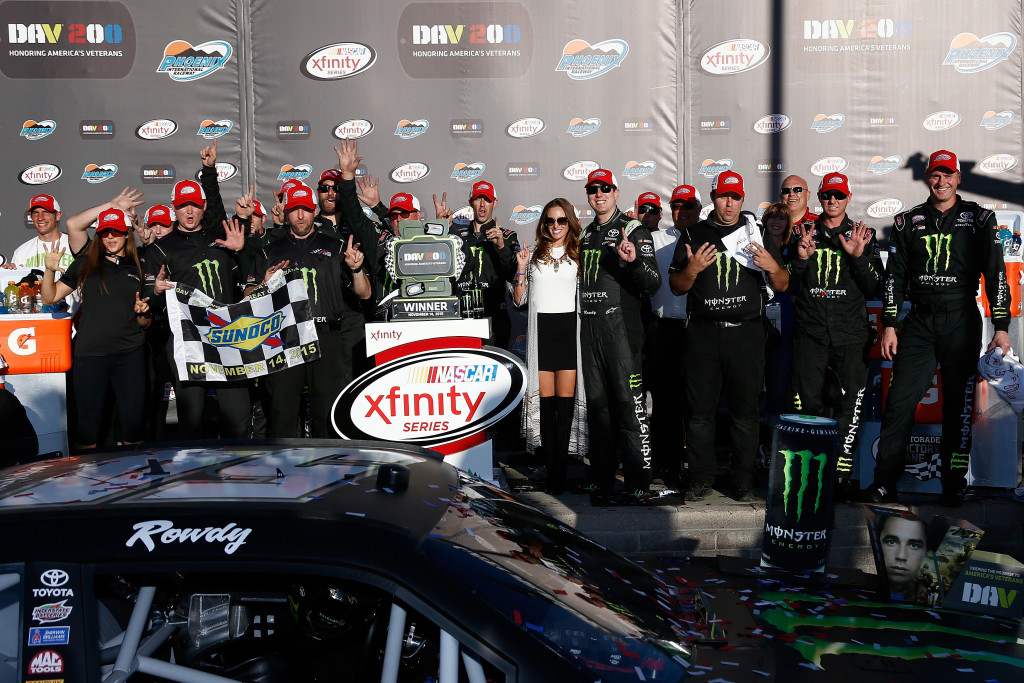 Kyle Busch was in a league of his own in Saturday’s DAV 200 Honoring American’s Heroes NASCAR Xfinity Series race at Phoenix International Raceway, winning convincingly after leading 190 of the race’s 200 laps.  This marked his  76th Xfinity win and eighth at Phoenix in his 19 starts on the one-mile oval.

About the only place Busch couldn’t drive his Monster Energy Toyota on this day was into victory lane after exploding his rear tires in his post-race donut celebration, needing his team to get the car pointed in the right direction.

“It wasn’t particularly hard, obviously,” said the pole-sitter, Busch.  “I do remember that there was one other time here I think I led 200 of 200 [laps].  We’ve done that here before.  Today was close.  We just weren’t able to get good enough pit stops to come out of the pits with the lead each time and hold the lead that we had.

Brad Keselowski, driving the Penske Racing No. 22 Ford Mustang that won the NASCAR Xfinity car owner championship in 2015, finished second, trailing at the end of the race by 3.097 seconds after a long day of racing. 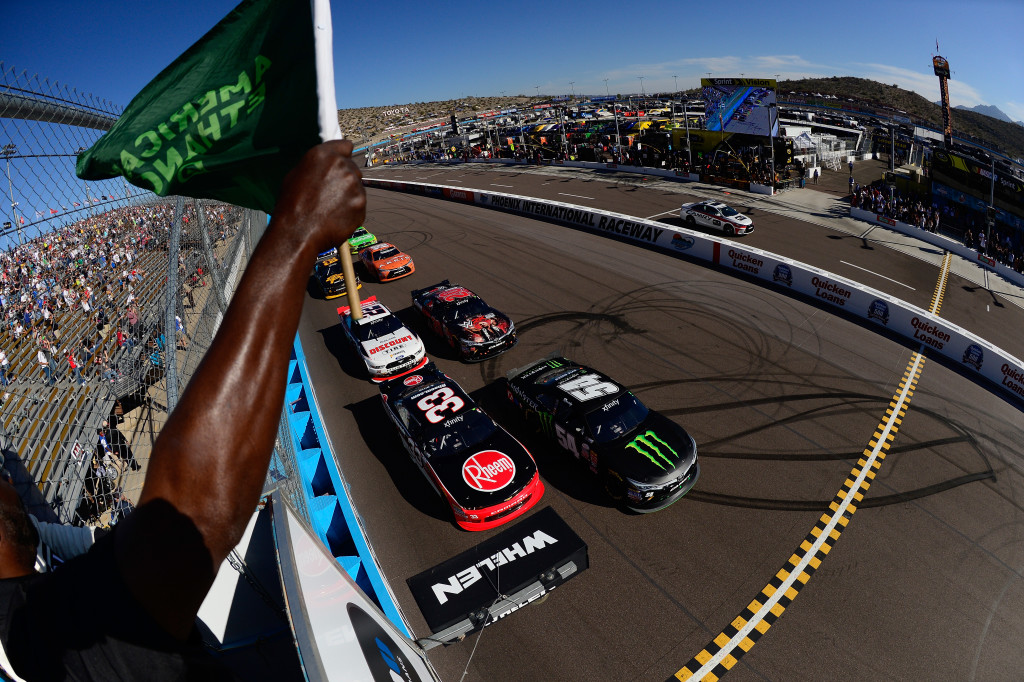 “We had a great effort,” Keselowski said optimistically.  “We had a great day on pit road.  The guys on the pit crew did a great job there.  We gained spots, so that was really cool and real fun, but we just needed a lot more speed to run with the 54 [Busch].  Either way, it was a pretty solid day.”

The NASCAR Xfinity championship will go to Homestead-Miami Speedway to decide it all.  Leader, Chris Buescher marches into Florida after finishing 13th, one lap down in Phoenix with now an 18-point lead over Chase Elliott, who finished seventh.  Ty Dillon whittled his margin down to 22-points out of the lead while Regan Smith is 24 markers behind.  Buescher can claim his first Xfinity title finishing 13th or better in Miami. 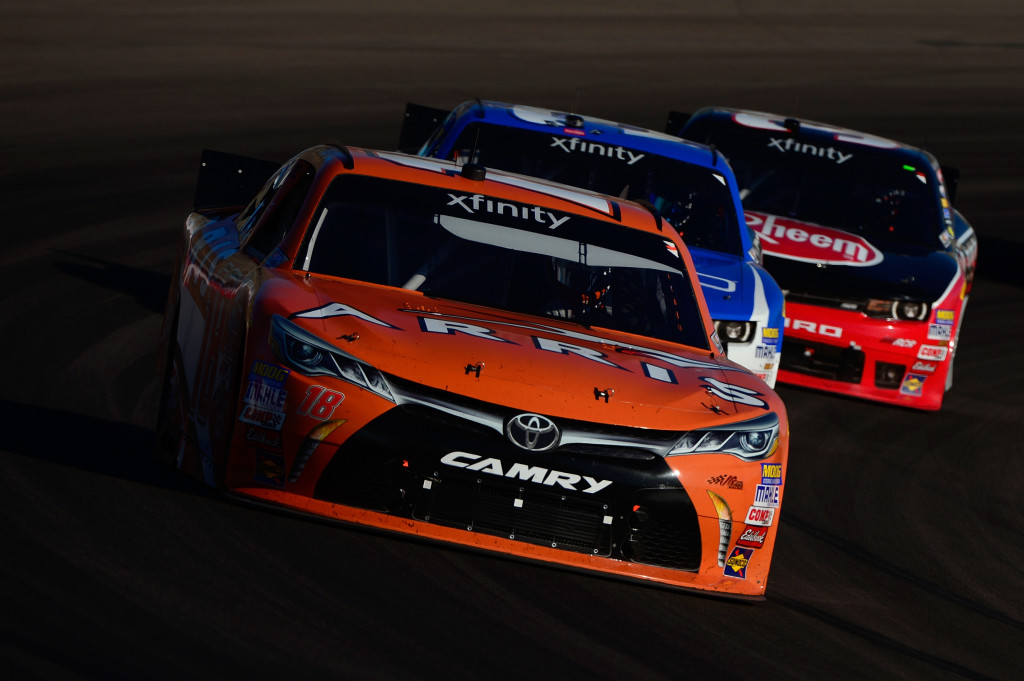 “In the grand scheme of things, we need to go to Homestead and we need to have a good day and do what we did there last year – just run around and stay out of trouble,” Buescher said.  “Run fifth – that would be just fine.

“When you look at the averages and points gained versus our needed position to finish, our window is getting bigger as we go through these last four races, so that makes me feel good as we go into Homestead.  Even though they gained some points, honestly, unless something crazy happens at Homestead it’s just not going to be enough.”

The average speed of the DAV 200 Honoring America’s Heroes was 113.583 miles per hour.  Three caution flags for 18 laps slowed the race and there were five lead changes among only three drivers. 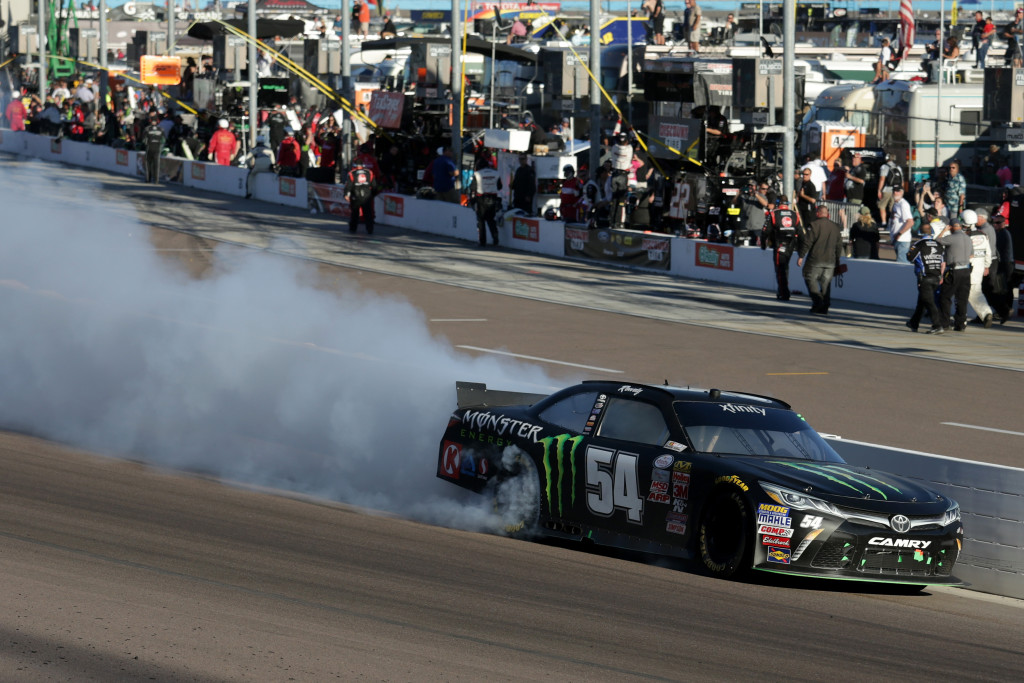 It all comes down to the NASCAR Championship weekend at Homestead-Miami Speedway for the running of the Ford EcoBoost 300 starting at 2:30 p.m., Saturday November 21 on NBC.