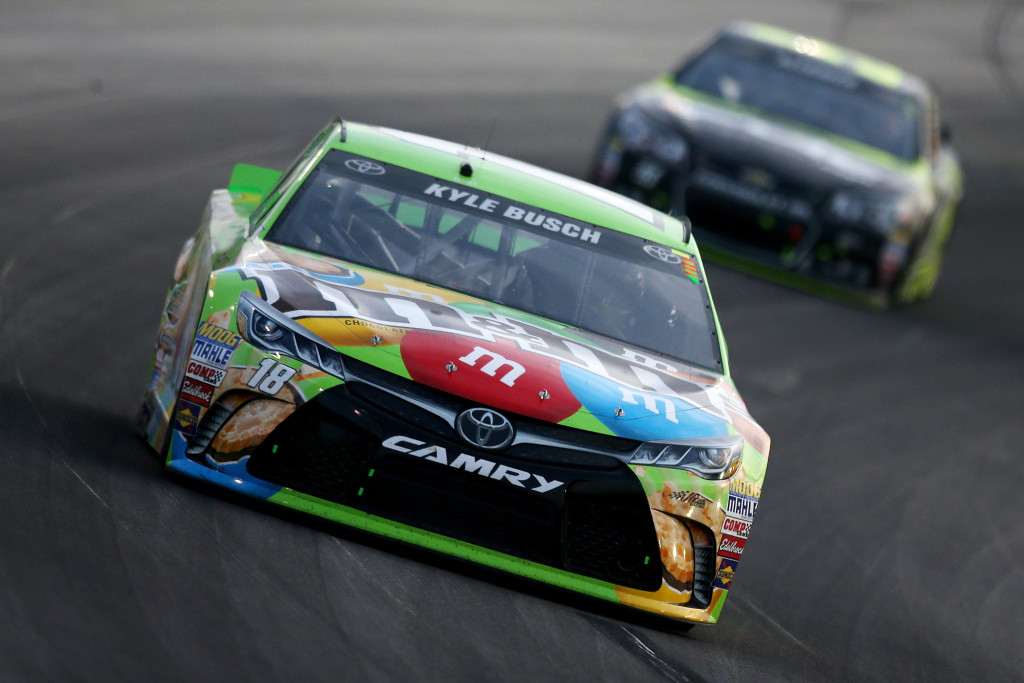 NASCAR’s new aero package with lower down force proved its worth, producing 13 lead changes among eight drivers in the race with drivers being able to run tighter in a pack, bringing closer competition.

On this night, Kyle Busch’s campaign was unstoppable, leading 163 of the 267 laps in earning his 31st career win and second of this season.

He still finds his JGR team outside the Sprint Cup Chase by 87 points from Cole Whitt while eight races left to reach the Top 30.

“That right there is what we’ve got to do,” Busch said in only his seventh race back from his Daytona injuries.  “Just to score as many points as we possible can; to score those wins, that’s what’s going to get us where we need to be.  We led the most laps and we won the race, so that’s all you can score.  We’ll just continue to push on and thrive.”

Busch made his approach on Logano starting on lap 244, and the two swapped the lead nearly 10 times, going side-by-side and back-and-forth for the next four laps until Busch found his quicker racing groove, being able to pull away from Logano.

Logano held on to finish second in his Team Penske Ford.  “Second just hurts, you know,” said Logano right after the race.  “When you’re that close to winning them, but we’re still proud of what we did today.  We had a fast car; we’ve improved our speed.”

Finishing out the top five were all JGR teammates of Denny Hamlin, Carl Edwards, and Matt Kenseth.  The last time one team had all four of their cars in the top five was in 2008 at Michigan, featuring the Roush/Fenway Racing organization.

Sixth was Brad Keselowski, Jeff Gordon, in his last Kentucky race, finished seventh, followed by Kevin Harvick in eighth.  Ninth was Jimmie Johnson and rounding out the top ten was Kurt Busch.

“I didn’t have any brakes,” Earnhardt told his team on the radio after the incident.  “I don’t even know why we’re out here.”

This didn’t appease Patrick, who colorfully expressed her own fury on her radio and showed her frustration after the race, consulting with team owner, Tony Stewart.