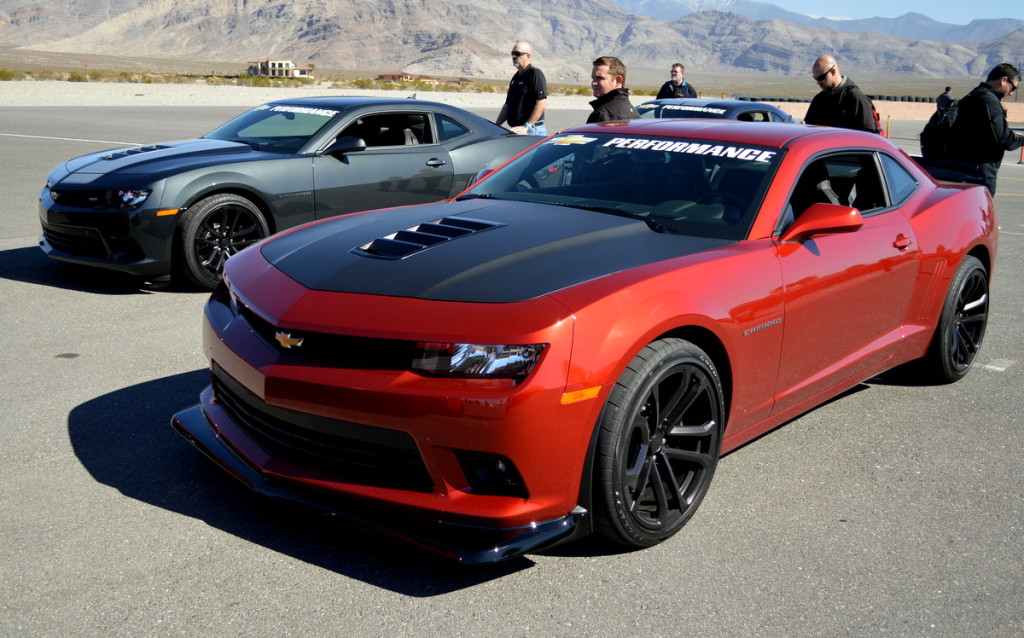 Photos and videos by Andrew Chen

While 2015 marks the last year of production for the current Camaro, there’s still plenty of life left for “America’s best-selling performance car.” During Chevrolet’s SEMA pre-show, journalists were invited to experience street and track performance upgrades for the 5th-gen Camaro SS at Spring Mountain Motorsport Resort near Las Vegas, Nevada. It was a first-hand demonstration of how Camaro SS owners can take their car’s performance to even higher levels with factory-engineered 1LE and Z/28 components.

Full disclosure: Chevrolet paid for my flight to Las Vegas and hosted me at the Spring Mountain Motorsports Resort so that I could experience the performance upgrades on the Camaro SS.

New to the Chevrolet Performance Parts catalog is an array of Z/28 parts for all 5th-gen Camaro SSes. Unfortunately, the “flow-tie” isn’t available, but a suspension kit, exhaust system, differential cooler and all sorts of aero pieces are available for you to customize a ride that suits your needs.

To show everyone what’s achievable by installing the upgrade parts, Chevrolet built two Camaro concepts using components sourced from the ZL1, 1LE and Z/28, and named them the Ultimate Street Camaro SS and the Ultimate Track Camaro SS. In-house testing of the Ultimate Track SS shows an 8 second improvement over a stock SS around their 2.9 mile track at GM’s Milford Proving Ground; all achieved with bolt-on parts and some slight tuning.

In order to really appreciate the performance enhancements, I set a baseline experience with a Camaro SS. It’s 426-horsepower V8 is plenty fast, and the suspension was confident, but slightly soft for the track. The corners brought on understeer and a decent amount of body-roll, but the car remained predictable and controllable.

Next up was the Ultimate Street Camaro SS, outfitted with the 1LE package which includes a tuned suspension system, strut tower brace, front and rear brake kit, short-throw shifter and a performance exhaust system. The difference from the stock SS is immediately noticeable. Not only does it sound better, it also feels a couple hundred pounds lighter; a definite confidence booster on the track. Body-roll is reduced thanks to the larger front and rear stabilizer bars, and turn-in feels more neutral with the revised toe links and rear shock mounts. Chevy’s testing shows a 6 second improvement in lap time over the stock SS with these bolt-on enhancements.

I wasn’t sure how Chevy was going to squeeze out more performance from their Ultimate Track SS with mostly bolt-on pieces, and if they did, I thought it wouldn’t be very noticeable. I was wrong. Very wrong. The gains in performance from the Ultimate Track SS over the 1LE package are just as dramatic as the initial jump from the stock SS. The car felt like it shed another couple hundred pounds over its 1LE sibling, giving me even more confidence on the road course. The Ultimate Track SS features an LS3 Power Upgrade package that adds 30 horsepower via a camshaft kit and CNC-ported cylinder heads, and increases the redline to 7,000 RPM. Turn-in and grip are improved further with the Z/28 suspension kit that features racing-derived spool-valve dampers and higher-rate coil springs. My favorite upgrade is the Z/28 helical differential which uses a zero-preload limited-slip design that lets you steer with the throttle due to its different on-power/coast ratios; letting off the throttle while holding a constant steering angle makes the car turn-in even tighter. The car also had a multitude of Z/28 aero pieces for more downforce and brake cooling, and a Z/28 exhaust system that offers 26% less backpressure compared to stock.

All of these upgrades allowed me to get on the throttle much sooner and carry more speed into the turns. Body-roll is minimal and the car settles immediately after the big dip in the track.

Here’s what it looks like when a professional driver is behind the wheel of the Ultimate Track Camaro SS. (Special thanks to Ray from Spring Mountain Motorsport Resort for the hot lap!)

All of the components used to create the Ultimate Street and Track Camaros can be purchased separately or as your budget allows. You can upgrade with confidence as each component is designed, engineered and tested by Chevrolet Performance. In my opinion, this is the best benefit of purchasing from Chevrolet Performance; most aftermarket manufacturers don’t have the budget or resources to properly engineer and test their components.

With so many parts available, you can really tailor the perfect Camaro SS for your specific needs. If I were to build an “Ultimate SS,” I’d opt for the 1LE package (let’s be honest, I spend more time on the highway than the track) and then add the Z/28 helical differential with the Z/28 exhaust system for that extra muscle-y sound. It would be a comfortable daily-driver that could also thrown-down at the track. I’d call it the “Ultimate Me Camaro SS.”