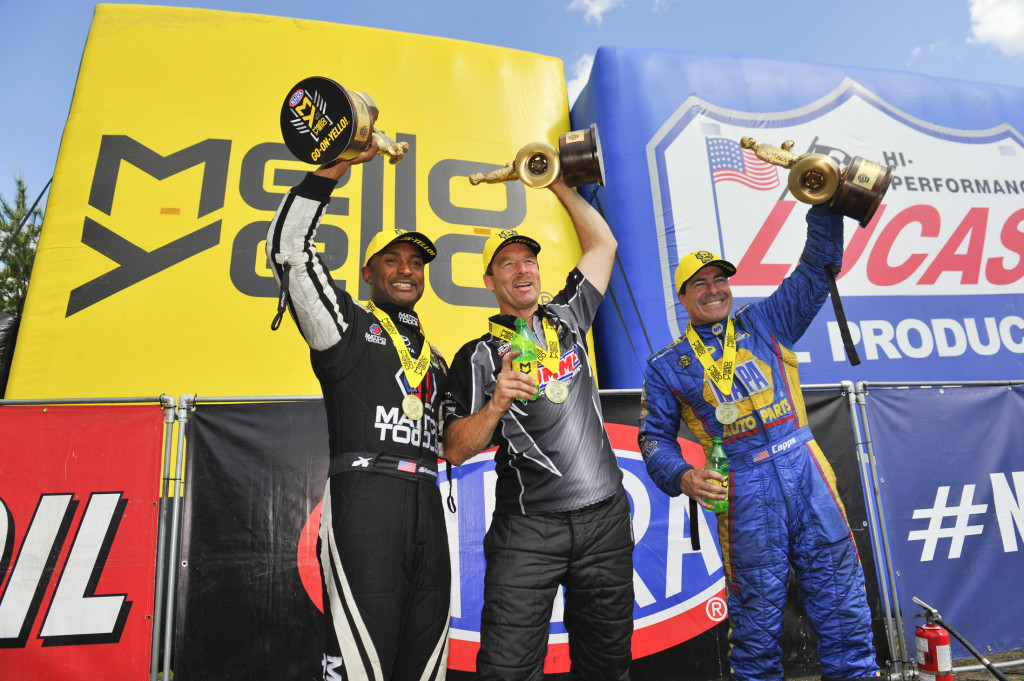 Antron Brown (Top Fuel) led the way along with Ron Capps (Funny Car) and Greg Anderson (Pro Stock) into the winner’s circle in the rain-delayed NHRA New England Nationals at the New England Dragway.  Finally, the skies cleared up offering fans and competitors a great day and the action on the track didn’t disappoint with near record times produced with the great New Hampshire sea-level air. 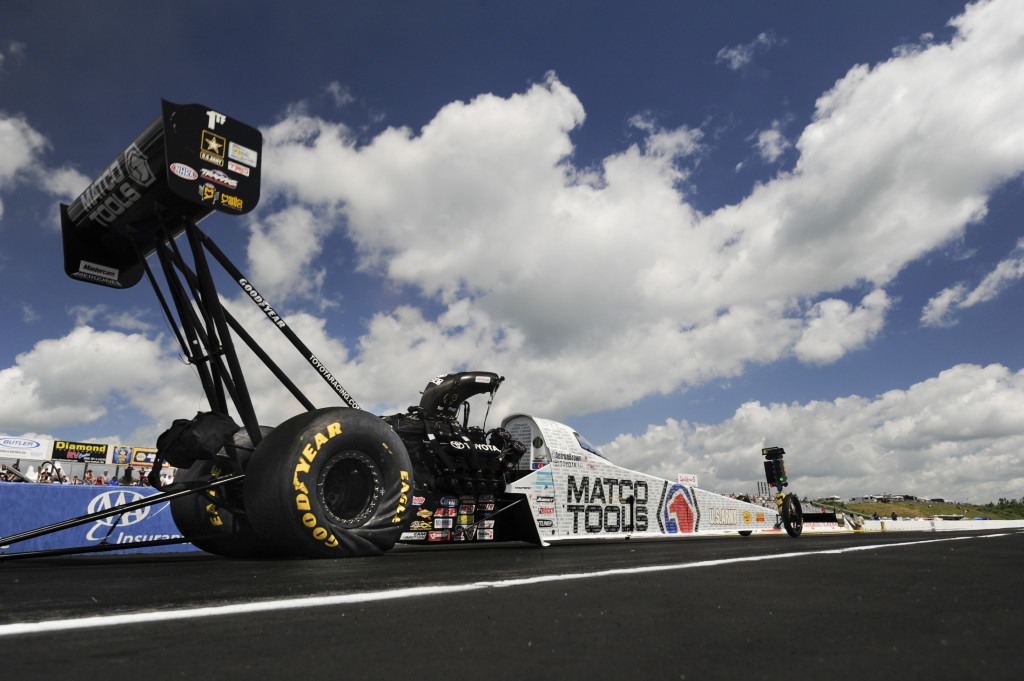 Antron Brown finally won at the New England Dragway, collecting his first Wally from the track, but added to his impressive list of 41 Top Fuel wins.  He dominated all weekend starting from the No. 1 position on the qualifying ladder.

The No. 1 qualifying position earned Brown a first-round bye but was then paired against Don Schumacher Racing teammates Shawn Langdon and Tony Schumacher before the final round against Steve Torrence.

The final against Torrence was another classic finish with Brown topping his opponent running a time of 3.769 seconds, 314.61 mph to Torrence’s very close time of 3.778 seconds, 325.30 mph.

“It feels good,” Brown said.  “We’ve been to a couple of other finals this year that we feel like we should’ve won.  This was a great race weekend.  We’re still learning some different things on the car and we are growing.  The car is showing us great signs of being a phenomenal racecar.  We’re reaping the benefits.  We had a couple of rounds today that went our way and it felt good to have that on our side and it felt good to be able to capitalize on that in the final round. We had a really, really tough race against Steve Torrence and that Capco team.” 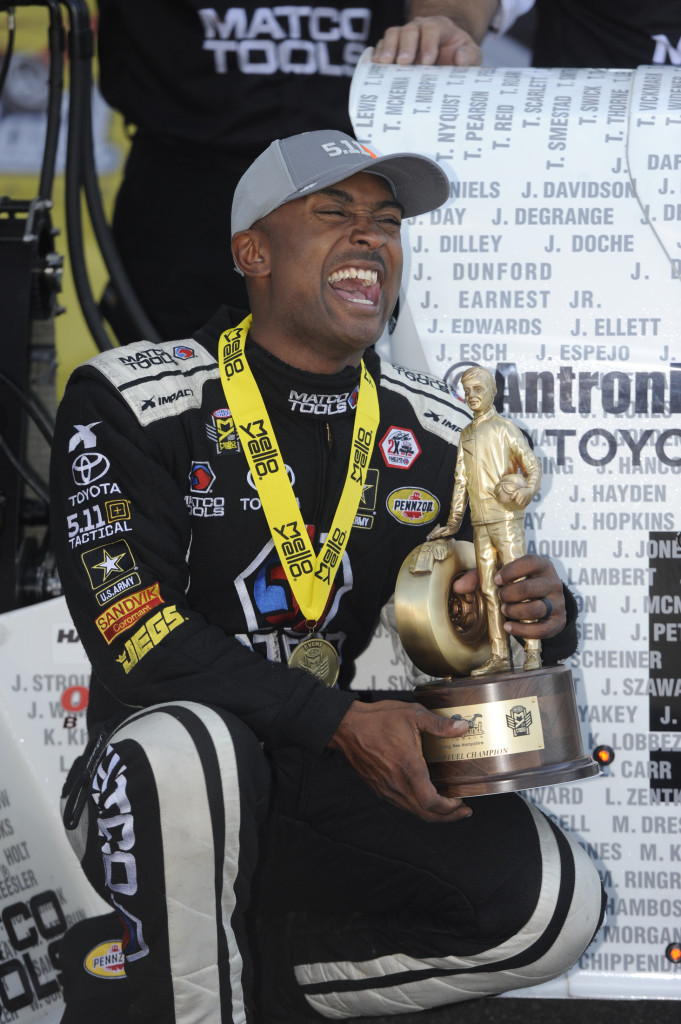 Brown narrowed the gap in the Top Fuel Mello Yello points standings to 46 behind Doug Kalitta. 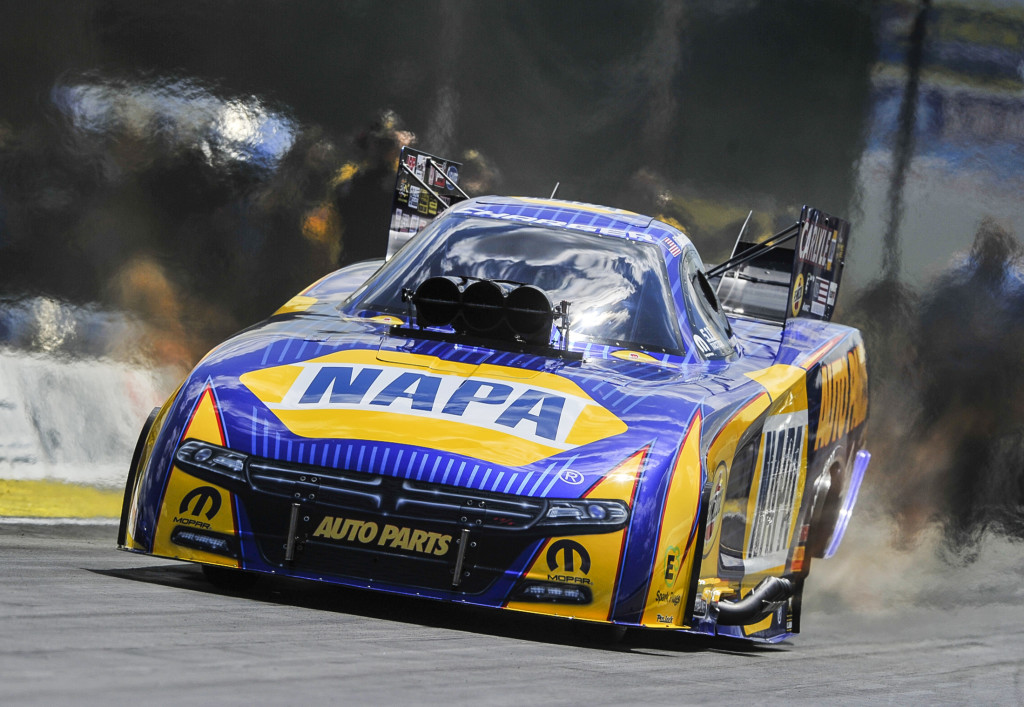 Ron Capps almost had a perfect weekend, like his DSR Top Fuel teammate Antron Brown, by posting the second quickest elapsed time in the history of the sport (3.865) taking the No. 1 starting position and then going through eliminations and qualifying all in the 3-second zone in his eight rounds of racing.

“Nearly perfect, that’s the key,” Capps said of gaining 10 of a possible 12 bonus points in qualifying.  “We gathered up a lot of qualifying points and that’s something we haven’t done in a while.  We’ve been working on that over the last couple years.”

It was Capps’ second win in New England, taking the title in the inaugural event in 2014 and his second of the season, winning the season-opener at Pomona.

“To win here twice is cool,” said Capps.  “All the fans that showed up at New England Dragway by cutting work or cutting school today saw some great racing.  There were so many side-by-side nail biters like our last run with Tommy.” 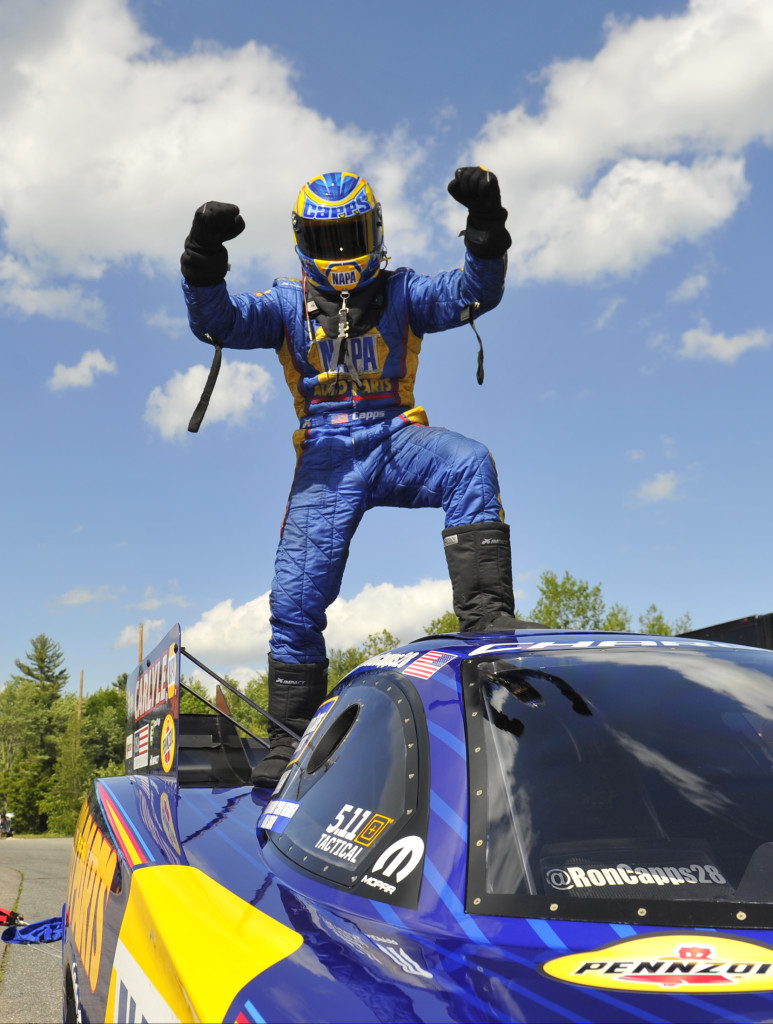 The win moved Capps up one spot in the Mello Yello standings to third, 22 behind leader Courtney Force and five behind teammate Jack Beckman in second. 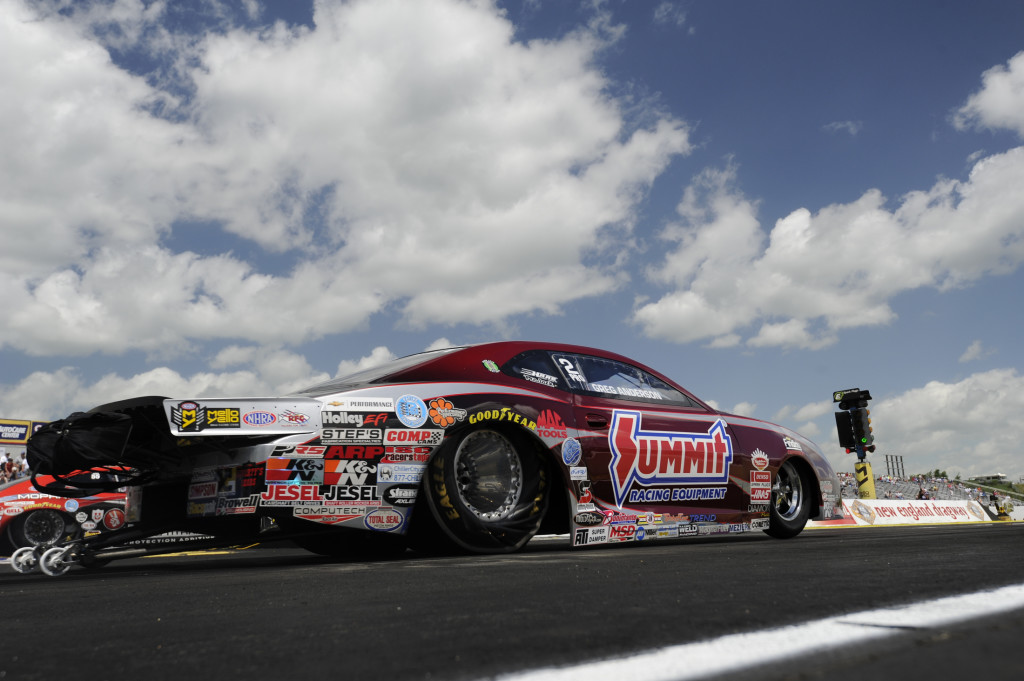 The dominance of Ken Black Racing keeps winning and on this rain-delayed event, it was Greg Anderson winning his 82nd event of his incredible career and fourth of the season.

Anderson marched through eliminations against a red-lighting V Gaines, Alex Laughlin, and finally beat his teammate, Jason Line before a final round ending his string at 34 consistent rounds of racing.

“It’s been a great start to the year,” said Anderson, “This team is on fire.  It’s a dream to drive that race car.  I love racing here.  It feels like racing back home in Minnesota.  I had the best car on the grounds this weekend and only I could’ve screwed it up, and fortunately I got the job done today.”

Anderson chops down the lead of Jason Line to now 89 Mello Yello Pro Stock points between the two Summit teammates. 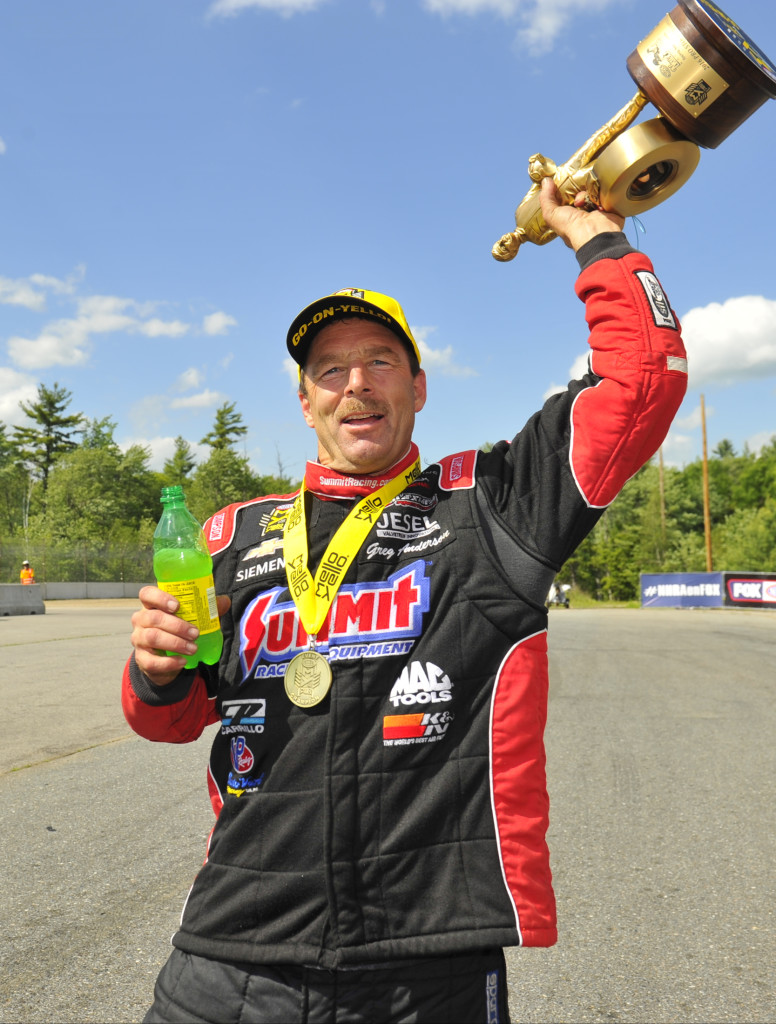