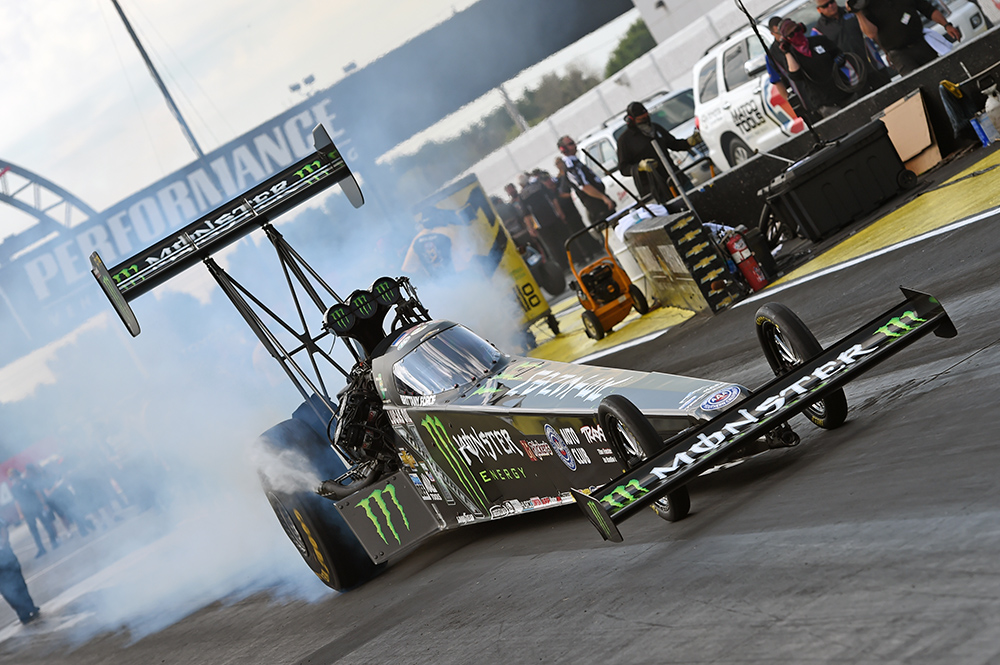 The Monster Energy Top Fuel dragster team driven by contender, Brittany Force was one of the few in her class to advance up a position in the Mello Yello standings from last Sunday’s NHRA Carolina Nationals. Although, it was just one position from fifth to fourth, the significance through it all is she is still primed and optimistic about her hopes in climbing back into contention and she’s ready to make a little noise about it.

The 30-year old Force came into eliminations 60 points behind Antron Brown and left the Tarheel State heading to St. Louis this weekend, 116-points out of the lead with five Countdown races to go with 20 points counting for each round win. 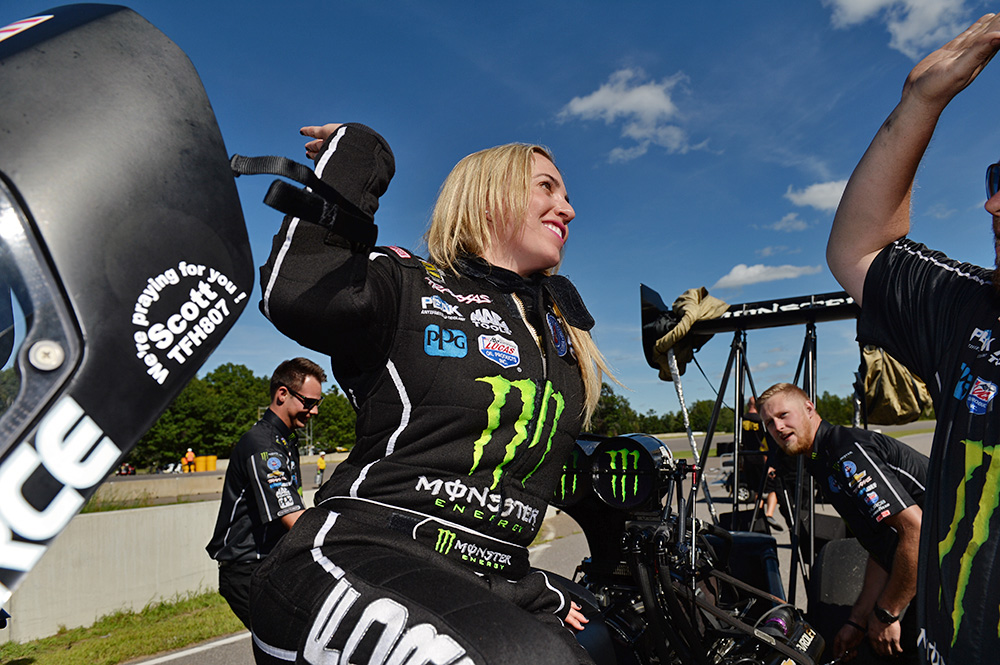 In her opening round against ‘The Greek’ Chris Karamesines, she set low elapsed time of the round with her time of 3.759 seconds, 321.81 mph leading to a crucial quarterfinal matchup in the second round against the defending Top Fuel champ, Brown holding lane choice.
She had previously beaten Brown in the finals at Brainerd and was again up to the task given her equal time, but lost by five feet in one of the closest side-by-side races of the day. She ran a time of 3.797 seconds to his 3.796-second pass matching her opponent in time, but was a hundredth of a second behind at the finish line.

“In Charlotte, second round against Antron really would have been a big move for us to get past that team to really advance forward and move up in the points,” said Force. “Hey, they’re on top of it. Congratulations to them on winning that weekend. That was a shame that we missed it, but it was a close drag race though. 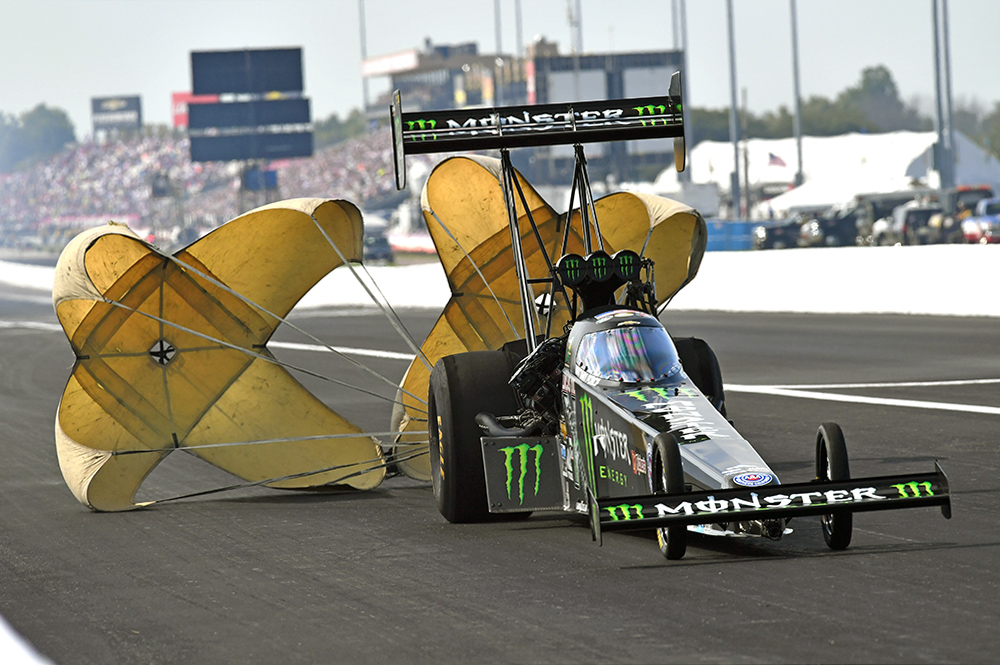 “I could see him right next to me and I couldn’t tell, you know, who won the thing. I mean it was that close. It was a great drag race for the fans and our car was running right next to his. It’s just unfortunate he got by us right there in the end. But that’s how drag racing goes.”
That round loss hasn’t diminished her spirit and she still feels the future has lots of promise coming her way and in the sport of NHRA Drag Racing, stranger things have happened, but it’s still performance that counts.

“We definitely moved up from fifth to fourth but it’s really the beginning of the Countdown is your best shot to move up the field,” said the three-time Top Fuel winner. “After Indy, all the points reset and everyone is on an even playing field and it’s really your chance to make your move to claim your spot and get ahead of everybody else. 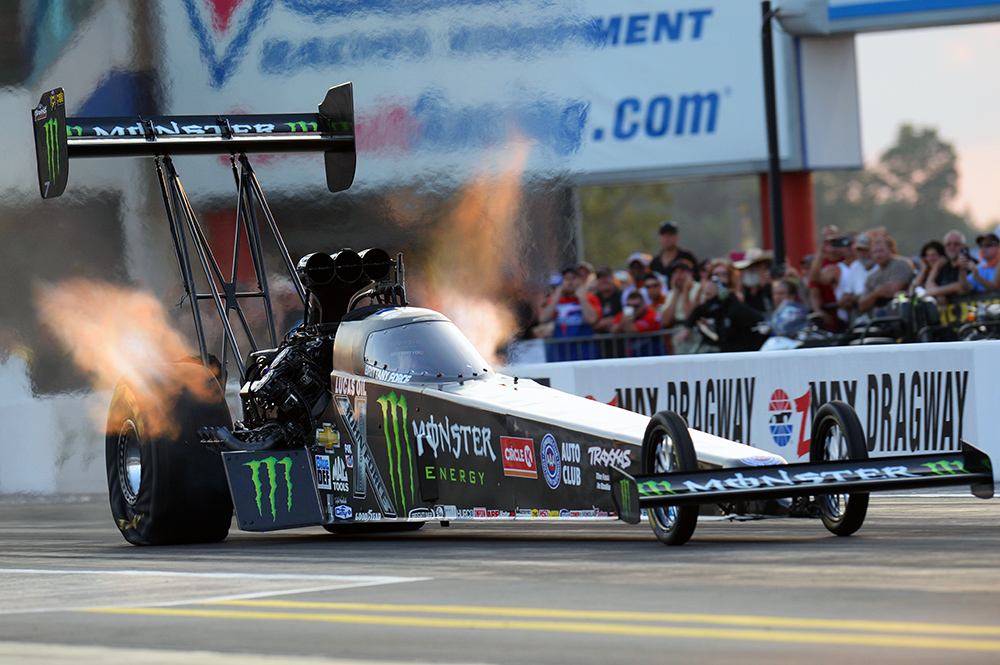 “There’s still quite a few races left and it can still be done. We went to second round, so we moved up to fourth, so that’s something we can be proud of and we’ll just have to keep going after it.”
At this stage it’s all about points and for Force qualifying is paramount in just not preparing for race day, but the possible qualifying points known as ‘small points’ that add up pretty quick and could make the difference in positions at the end of Pomona, NHRA’s final race of the season.
She has qualified in the top half of the field every race in 2016 claiming two No. 1 qualifiers at Topeka and Chicago setting her personal best elapsed time in Kansas at 3.676 seconds in May.
“At this point, every run you make down the racetrack has to count for something,” said Force. “You have to be set up ready to go for race day on Sunday. Having four solid runs down the racetrack is giving you your best shot at it. Getting qualified in the top half of the field every race; you can gain points that way. Every point matters when it comes down to the end of it. 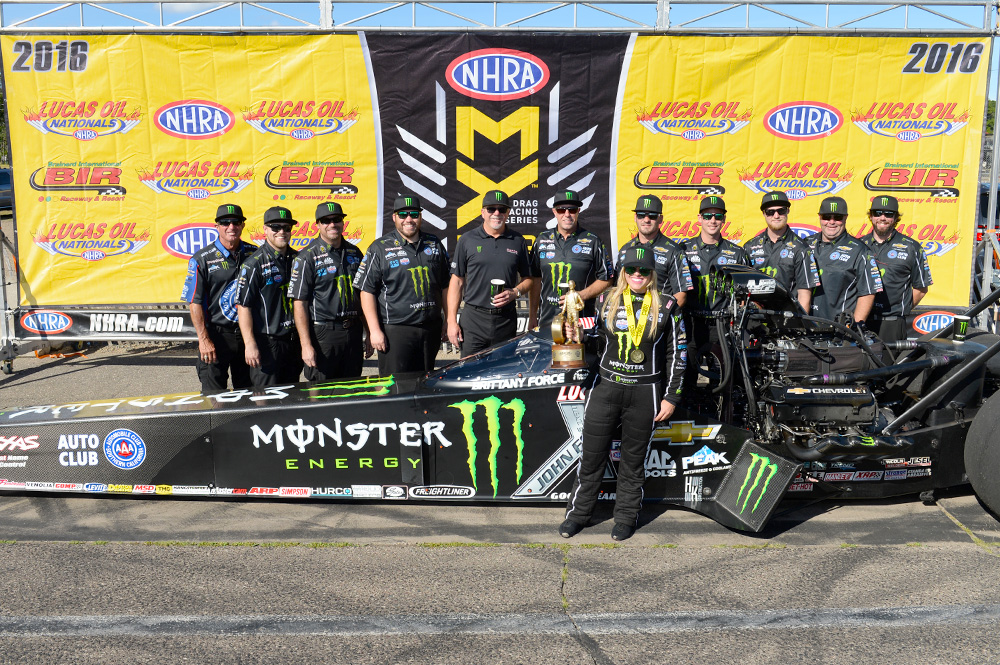 “You know, I’ve heard about many people who have lost the No.1 spot in the championship just by a few points. It definitely could happen. Every point matters. No mistakes can be made when you’re this far along in the game.”

With the cooler weather of fall coming into the picture at some of the key races of the Countdown in late October and November, her John Force Racing team’s anticipation lead by crew chief, Brad Husen and tuner, Alan Johnson definitely sways their way. This team has enjoyed early season success that sent her to victories at the Gatornationals, her first, the 4-Wide Nationals and at the recent Lucas Oil Nationals in Minnesota in August under cloudy skies.

“Where we struggle is in the heat,” she said. “That says to us, it was great weekend in Charlotte to make some solid passes, qualified good and we went to round two, but the good news for us is our car went down the track in the heat. The track temperature on Sunday was 130 degrees. It was a hot day. That was good for us especially learning that part of it. Yes, we’re better in the cooler temps and we’re hoping that for Reading. We’ll see what we get.” 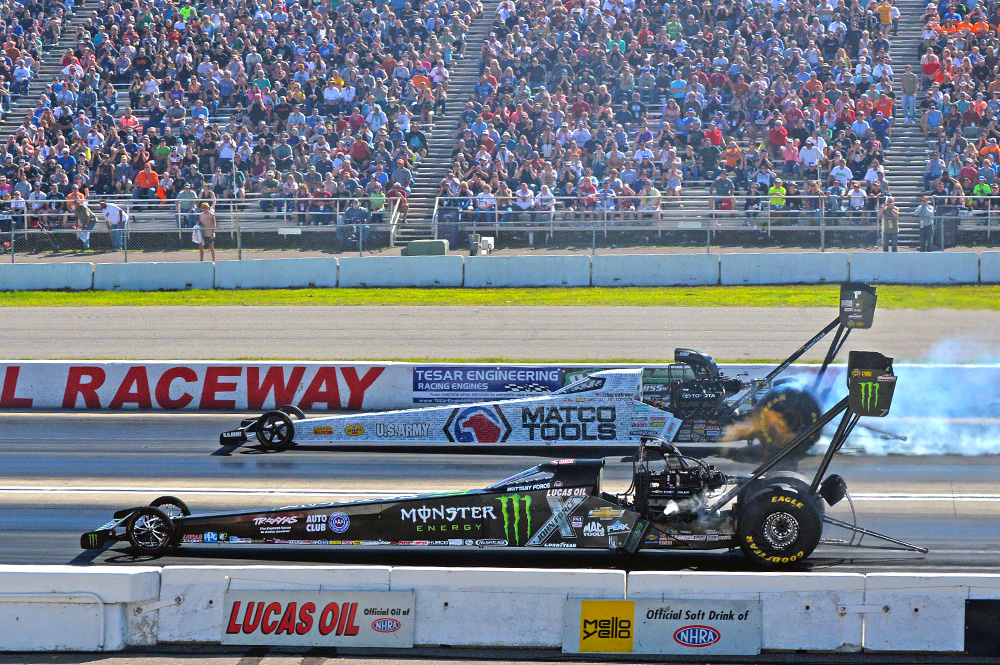 She knows that her equipment is equal to anyone out there on the track and with a break here and there, who knows how all this will fall out. That’s her motivation and has such confidence in her Monster Energy team in the car they bring up to the starting line. It’s a tuner’s game for the remaining five NHRA Countdown races and if anything comes your way, every team has to be ready to ramp up the car’s performance up to a certain point, but not over the edge.

“We’re in the Countdown now,” said Force. “There’s only five races left and you want to push the car to make sure you make good runs and you qualify in the top half of the field. Make sure you turn on the win light. It’s tricky because you don’t want to push too hard to where you blow up and you don’t get it down the track at all and it’s hard to find that balance. You play it safe, but you’re still pushing ahead.”

The NHRA AAA Insurance starts Friday with TV coverage on FOX Sports 1 starting at 7 p.m. with qualifying highlights airing at 2 a.m. on Sunday morning, Sept. 25; on FS1 with final round eliminations LIVE at 2 p.m. that afternoon.