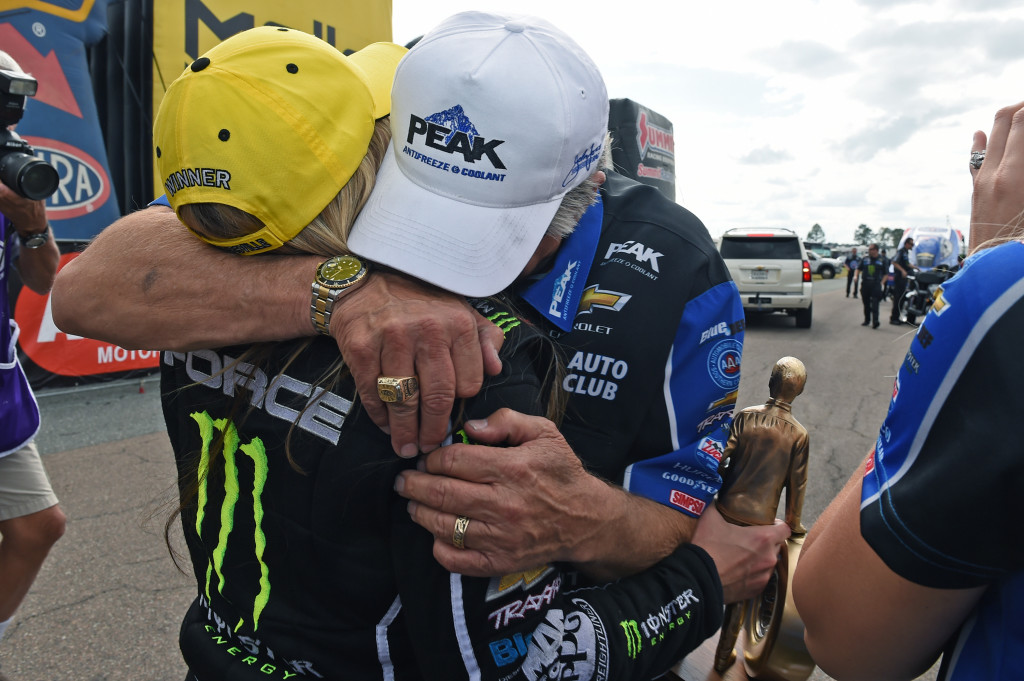 NHRA race fans made the annual trek to the Auto-Plus Raceway in Gainesville, Florida packing the Amalie Oil Gatornationals to full capacity with the east coast debut of the National Hot Rod Association coming to town under beautiful warm and sunny Florida skies.

Pro Stock saw another KB Racing Pro Stock 1-2 finish with Greg Anderson defeating his teammate Jason Line in the final on a hole shot for the second time already this year.  Eddie Krawiec flirted with the 200 mph barrier most of the weekend before beating Hector Arana, Sr. in the opening race of the two wheel series. 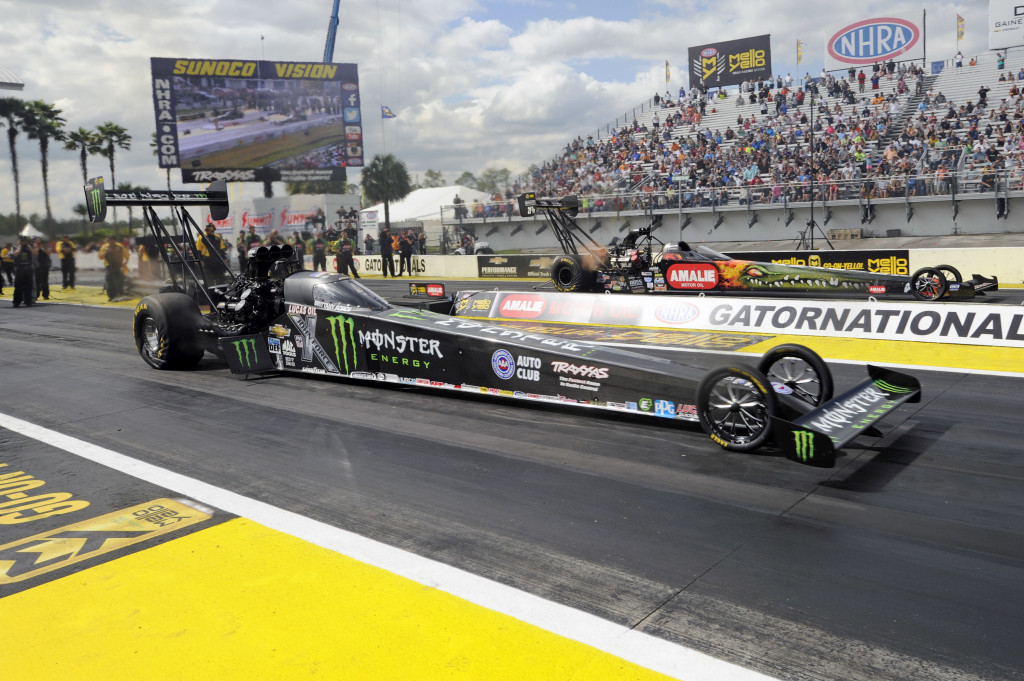 It appeared most of the starting field in Top Fuel wanted to head off to an early ‘Spring Break’, seeing the No.1, 3, 4, and 7 seeds, respectively leaving the door wide open for another first time winner in the NHRA Top Fuel Mello Yello division.

Brittany Force in her Monster Energy dragster answered the call all day, running incredible numbers and setting low ET of every round.  She safely won against Morgan Lucas, Tripp Tatum, and Dave Connolly in the semi-finals with the quickest time of the day at 3.729 seconds.

After getting to her eighth final round of her young career, finally, she finally broke through the winner’s bracket cruising against Terry McMillan in the finals running a pass of 3.772 seconds, 318.77 mph.

It was the last NHRA race in Phoenix where the Lady Force lost against another first-time woman winner, Leah Pritchett, in a devastating hole shot and ever since that final round, she couldn’t wait to get back behind the wheel to make amends.  She was on a mission, for sure.

“Last weekend was incredible and we almost made it there and I was definitely very bummed but very proud of my entire team because they worked so hard to get here,” said Force after the race.  “Today when we came out here driving out to the track and I was feeling good.  As a driver, I had that feeling; I had it in my stomach and just felt like we were going to go all the way.  We finally did and I have been chasing this for so many years and this is a proud moment to be standing here today.  I have to thank my entire team, my crew chiefs Brian Husen and Alan Johnson – thank you for getting us here.  Thank you to my family, especially my dad, for giving me this opportunity.” 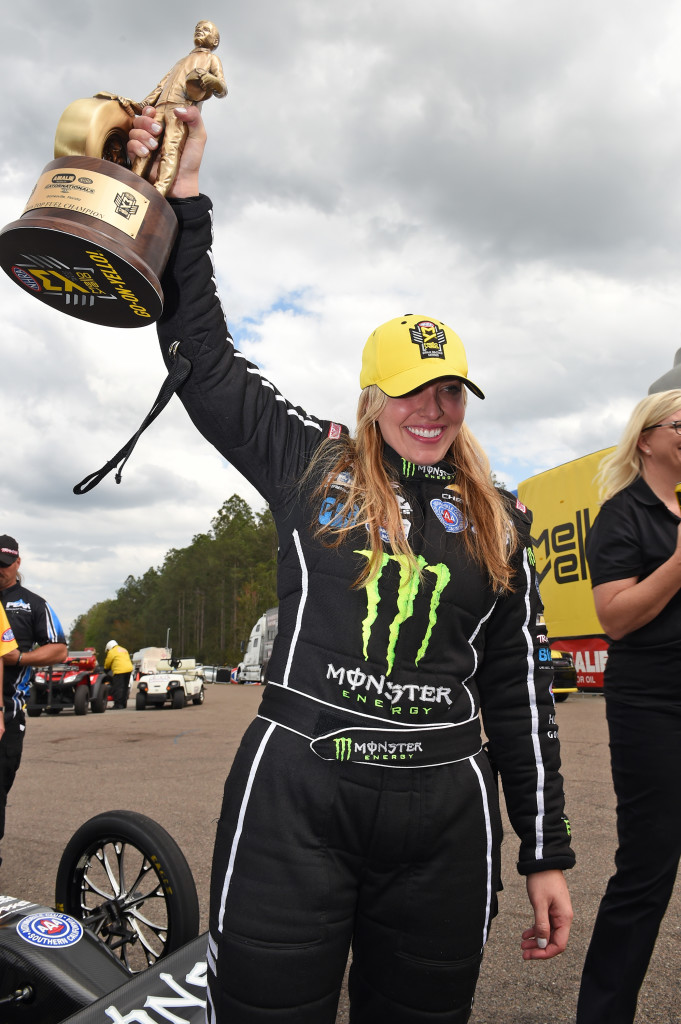 She is now the 102nd driver to win in Top Fuel and it was the first time since 1993 has there been first time winner in back-to-back events.

The 27-year old Force is now the current Mello Yello Top Fuel points leader with a 41-points lead over Clay Millican after three events.  Her first victory also places her now in the Traxxas Shootout on Labor Day weekend. 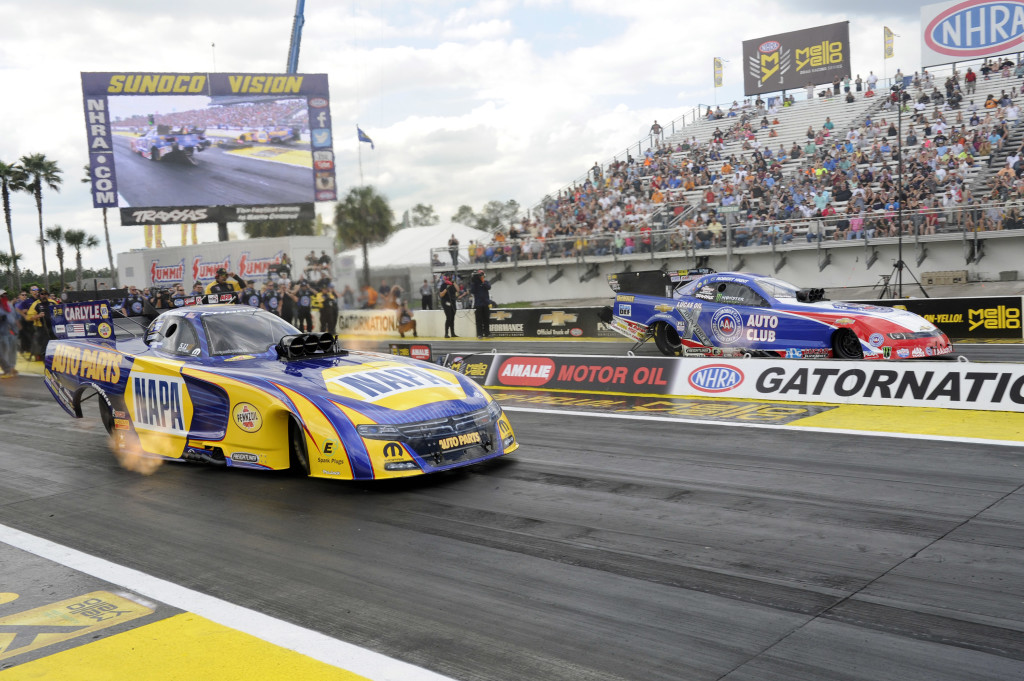 Robert Hight was at the other end of the JFR Funny Car spectrum beating Terry Haddock, Matt Hagan, and Chad Head with consistent runs in the 3.96 and 3.97 seconds category before winning the race after losing traction against Ron Capps in the finals.

“When you race Ron Capps, he’s been doing this a long time and I think he’s No. 2 in Funny Car wins, he’s one of the best out here,” said Hight, who won with a time of 4.429 seconds in their fourth contest in the finals.  “When you go against him and win in a pedal contest, it’s pretty rewarding.  As a driver, it’s fun to win those every once in a while.  You want to go out there and win low ET, but when you can win it pedaling it — especially against Ron Capps — it’s pretty awesome.

“We had a great race car the first two races so we actually felt we let a couple slip by that we actually could have won.  So, to come in here to get it done and to get it done with Brittany and us leaving here with the points lead it doesn’t get any better.  It’s been a lot of hard work and it’s finally paying off.  I’m very fortunate to be driving for (crew chief) Mike Neff, and this is my second win at Gainesville with Mike Neff.  This is a major race.  When you look at the majors in golf, this is a major.  To win a major here, the East Coast kickoff, is pretty rewarding.” 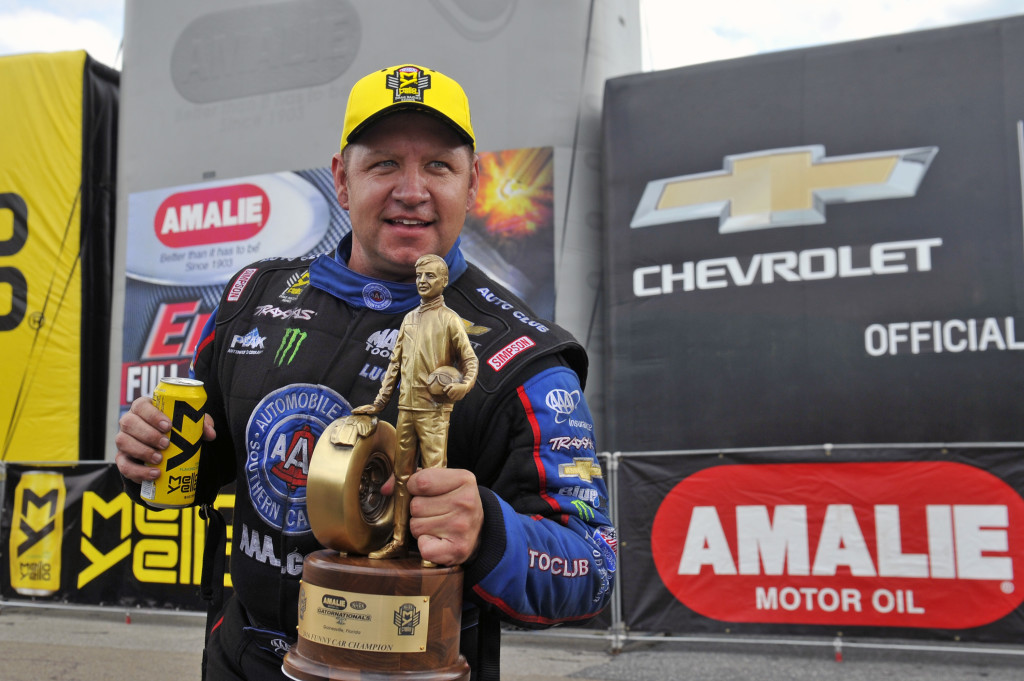 The win propels Hight into the Traxxas Shootout at Indy and into the Mello Yello Funny Car points lead with a slim 1-point lead over Capps. 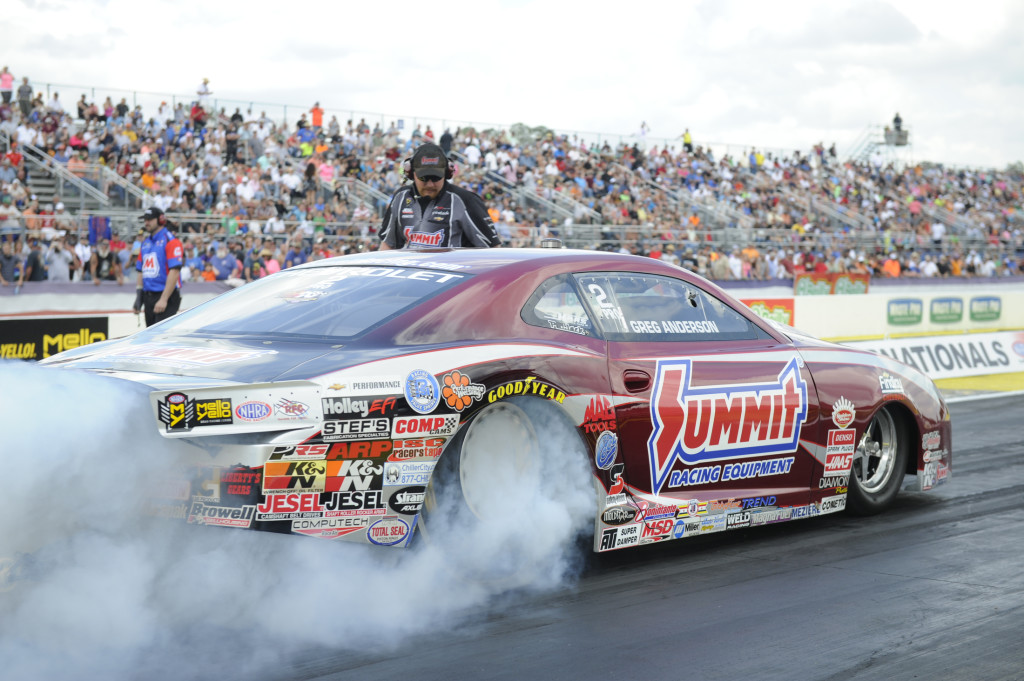 In Pro Stock, Anderson raced his Summit Chevrolet Camaro to a holeshot win against Ken Black Racing teammate and points leader Jason Line.  Anderson posted a 6.590 at 210.01 and used a quicker reaction time to cross the finish line before his teammate, who powered his Chevy Camaro to a 6.581 at 210.57.  Anderson raced past V. Gaines, Jeg Coughlin Jr. and Allen Johnson in the earlier rounds.  The KB Racing duo of Anderson and Line has combined to win the first three Pro Stock events this year.

“The whole weekend was great for KB Racing,” Anderson said.  “These races are not decided on paper, they’re decided on the racetrack every time.  We are human and things happen different on the starting line.  Somehow, I overachieved in the final and stole a victory from Jason.  Good for me, but it’s still great for KB Racing.  No matter had happened in the final round, it was a victory for the team.  I can’t be prouder of the race team I’m on.”

Line, who won the last event in Phoenix, qualified first and had a first round bye.  He then defeated Vincent Nobile and 2015 Rookie of the Year Drew Skillman in the second and third rounds, respectively.  Line has four victories in six final round appearances at Gainesville.  This is second consecutive year Line has lost to Anderson in the finals at the Gatornationals. 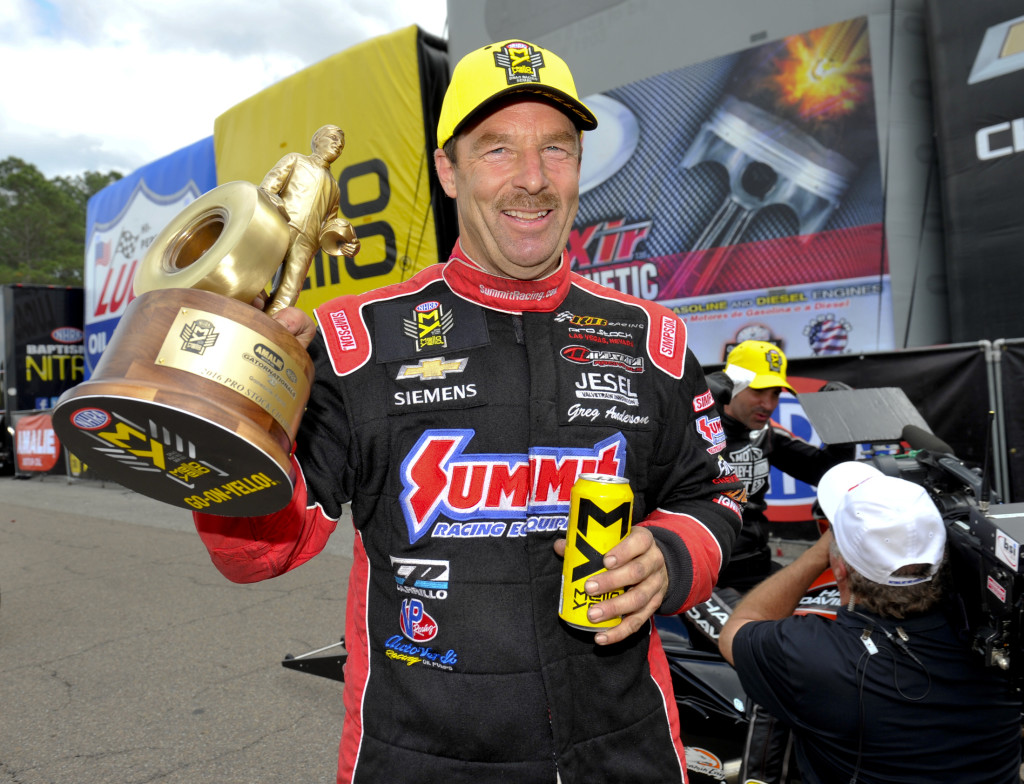 “Hopefully this is a good start.  It’s been fun. I was frustrated with myself because I didn’t do a very good job (in the final).  We had two great hot rods.  We aren’t going to trade these two Camaros for anything.  We’ll go home and go back to work.  You can’t stop digging. It’s fun to come to the track every week knowing you have a good chance to win.” 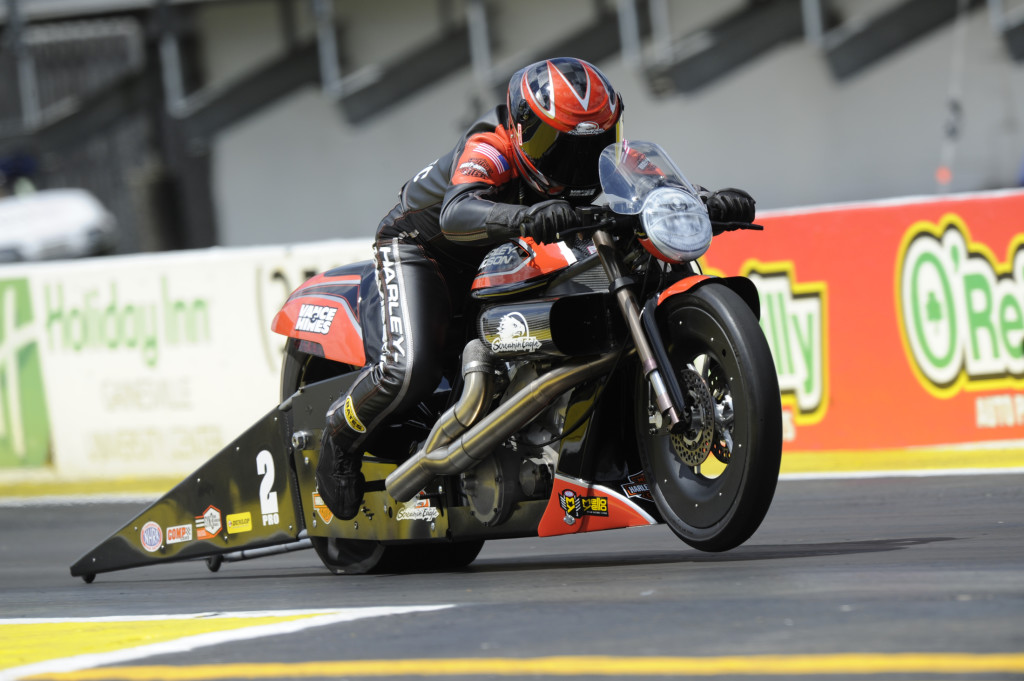 In Pro Stock Motorcycle, Eddie Krawiec rode his Vance & Hines Harley-Davidson to a 6.820 at 198.23 to defeat Hector Arana’s 6.920 at 196.44 on his Buell.  This marks Krawiec’s 32nd career win and his fourth victory at Gainesville Raceway.  As the No. 1 qualifier, Krawiec outran Michael Phillips, Jerry Savoie and teammate and world champion Andrew Hines to make it to the final.

“Going out there I had a great motorcycle,” Krawiec said. “I have a great crew behind me, but the key thing for me was to not screw it up. You have the first round jitters after four months of not racing, but I knew I had a fast motorcycle. We’re all really excited, everybody back at our shop. We’re glad one of our Harley-Davidsons got the win.” 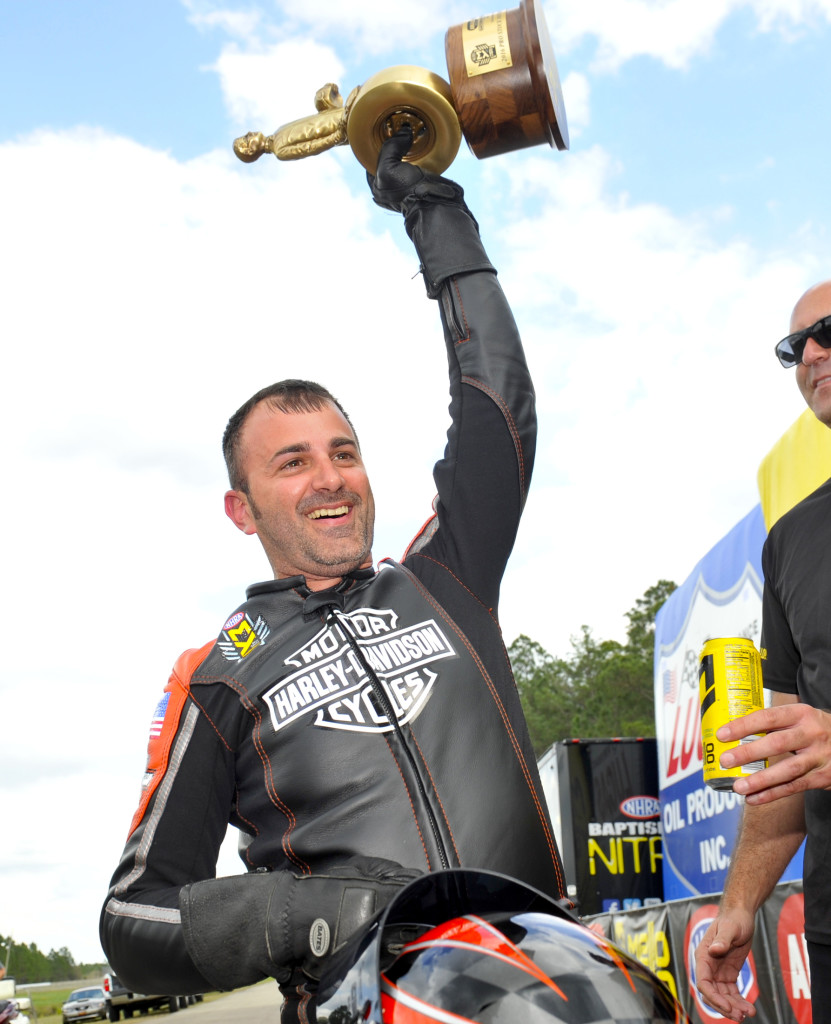