For the second year in a row, 2019 World of Outlaws Morton Buildings Late Model Series champion Brandon Sheppard proved that he was the driver to defeat this season after once again defending his Big Gator title at Volusia Speedway Park.

The first driver to win four World of Outlaws races in a row since Tim Fuller accomplished the feat in 2009, Sheppard did not begin his race week sweep at Volusia Speedway Park’s 49th Annual DIRTcar Nationals in as impressive a way as last year. Although he kicked off the six-day weekend with a win on opening night, it would take a runner up finish, as well as another win and sixth, fourth and fifth place finishes over the six nights of 2020 Late Model week for his second career DIRTcar Nationals championship.

“The start to our year has been so good, and I cannot say enough about it,” said Sheppard. “The best part is once again taking home this illustrious championship. Although this didn’t happen the way that both my team and I wanted, I am just happy to begin our season this way.” 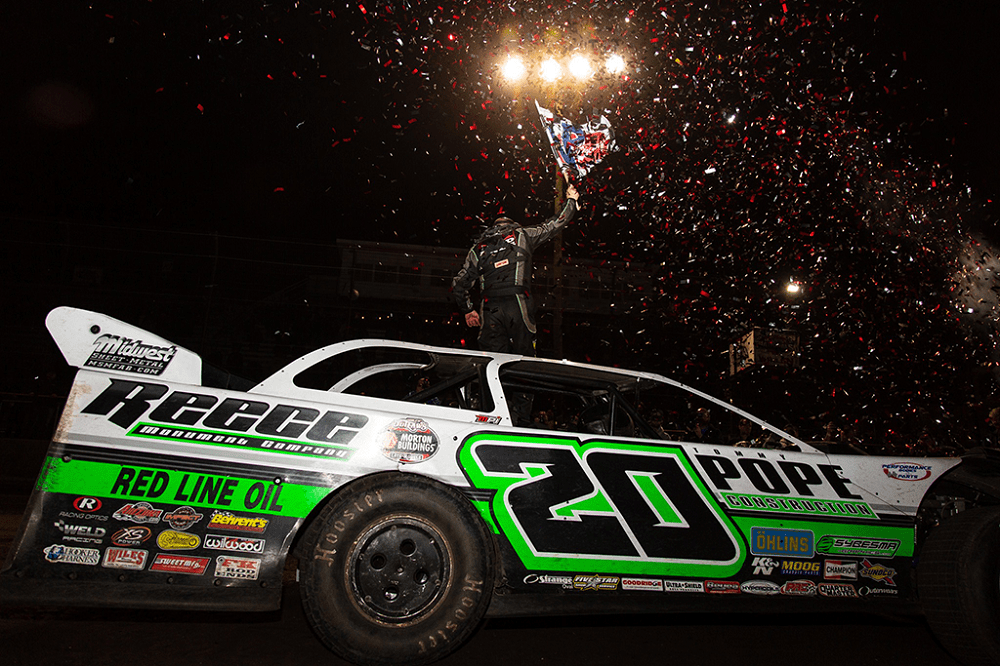 While Sheppard had a lot to celebrate during Saturday’s finale, there was another driver who also had the opportunity to pop the champagne. Following the wave of the green flag, DIRTcar UMP Modified regular Kyle Strickler kicked things off with the early lead, which he quickly surrendered to Darrell Lanigan on lap two before fading back to fifth. Lanigan led until a hard-charging Jonathan Davenport gave him a great run-down low to swipe the spot away as they crossed the stripe to complete lap eight.

These two drivers continued to battle for the next few laps, but another driver would vie for the race lead after the caution flag flew on lap 10. Thanks to Jonathan Davenport suffering from an internal failure, Tennessee native Jimmy Owens found his way to enter the picture after the restart, driving around Kyle Bronson on the top for the runner-up spot at the line.

Although Bronson tried his best to find a way to battle back to the lead, Owens kept it inside the top-three and made a great power move underneath Darrell Lanigan on a lap-25 restart to take second. Despite Bronson doing his best to drive away with the win, he would eventually slow down enough to give Chris Owens the chance to vie for the victory on the final lap of the race week.
Before the final restart, Owens said he knew he had the chance to catch and pass the #40B, but just needed some patience.

“I know he was running pretty hard and pretty aggressive there and I knew he was fast, and I thought, I’m just going to calm down and just pace myself and maybe he will come to me,” said Owens.

This turned out to be the perfect plan, because it gave the O-Show a chance to power to charge past Bronson on the final restart and cross the stripe for his third-straight Morton Buildings Feature win.

“This race was awesome,” said Owens. “I have never come out of Speedweeks with any kind of confidence and this win gave both myself and my team the chance to jive like we never have, which makes me very excited for the rest of the season.”

With another edition of the DIRTcar Nationals now in the history books, the Outlaws turn their attention to Tennessee’s Duck River Raceway Park on March 6 and Smoky Mountain Speedway’s Tennessee Tipoff on March 7. Stay tuned to RacingJunk.com for the latest from the dirt.