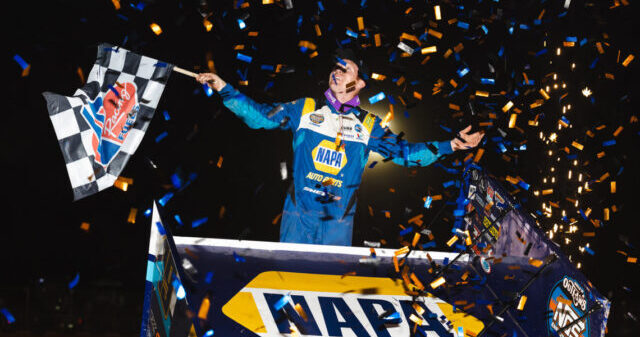 While some spent the 4th of July holiday weekend watching fireworks from your family cookout, one World of Outlaws NOS Energy Drink Sprint Car Series driver saw his own explosion during this weekend’s Independence Day Spectacular at Cedar Lake Speedway. Two-time and defending Sprint Car Series Champion Brad Sweet began his holiday race weekend by snagging his fourth consecutive victory at the New Richmond, WI track on Friday night after taking down Carson Macedo in the final lap of the first 35 Lap feature race of the weekend.

Although he would have to start behind fellow California native and pole-sitter Macedo following the wave the green flag and throughout the first 33 laps; despite every attempt he had tried to race his way to the lead earlier in this event; Sweet was finally given the opportunity he was hoping for when the final caution flag flew. Thanks to both Logan Schuchart and David Gravel both suffering flat tires at the end of this race, Sweet would be given the chance to chase down his rival on the ensuing restart. With two-to-go Sweet shot to the high side of turns one and two, which gave him just the momentum that he needed to charge his No. 49 down the backstretch with a full head of steam. Into turn three, he launched a slider and tip-toed to the cushion as he cleared Macedo out of turn four and saw the white flag waving. This gave the Grass Valley, CA native the chance to cross the finish line with a 0.895-second margin of victory.

This impressive victory would be the first of the race weekend for the driver that is now being referred to as The Big Cat. As the green flag waved on Saturday night’s 35 Lap feature, Sweet would be forced to start fourth behind Giovanni Scelzi, Aaron Reutzel and even his earlier rival Macedo who would once again start on the pole. Despite yet another challenge, Sweet’s Kasey Kahne Racing, NAPA Auto Parts #49 was dominant from the start. After racing his way forward to second by Lap 8, it would only take a few more laps before Sweet would once again take down race leader Macedo by Lap 13. The only restart of the race allowed Macedo to storm right back and retake the lead on Lap 14 and continuing his assault on the 24-car field before Sweet reeled Macedo back in and cleared him for good on Lap 21 of 35. Macedo continued to chase down his Independence Day rival over the final few laps, but ultimately Sweet crossed the stripe with a 0.834-second margin of victory.

Saturday’s victory marked Sweet’s 10th in the state of Wisconsin officially making this the winningest state of his World of Outlaws career. “Cedar Lake has always been special to this team,” said Sweet. “We all love this track and all of the fan support there. We always seem to have a good setup at this place there are always multiple lanes to race on and that plays into my hand. I just wish that the Kings Royal was here at Cedar Lake. Regardless, it is great to celebrate this holiday with this weekend sweep and I can’t wait to keep plugging away at the race season ahead.”

Sweet will have an opportunity to chase down yet another victory in Wisconsin next Saturday at Wilmot Raceway on Saturday, July 10. Following that, the Month of Money begins with the Brad Doty Classic and two Kings Royals at Eldora Speedway. Stay tuned to RacingJunk.com for the latest news from the dirt!