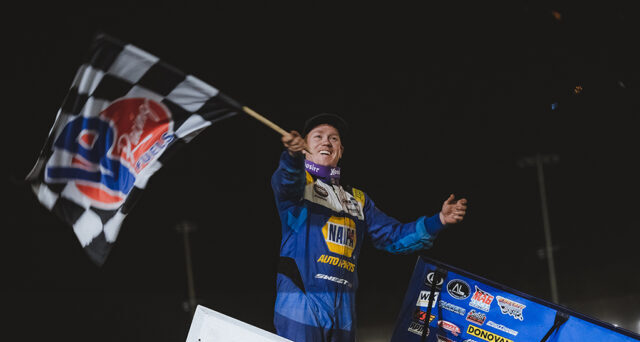 There are few Sprint Car drivers who have pulled off the kind of victories that Kasey Kahne Racing driver Brad Sweet has and after this weekend’s trifecta of World of Outlaws NOS Energy Drink victories, there is no way that anyone could ever forget this impressive driver’s name.

Beginning with Thursday night’s $10,000 feature at Jacksonville Speedway, in Jacksonville, IL, where Sweet would start on the pole after taking the DIRTVision Fast Pass Dash and use this momentum to lead the first 19 laps before second place starter Sheldon Haudenschild roared back to the point with a daring move in heavy lap traffic. Just as the #17 pulled a diamond off turn two and slid the #49 for the top spot in turn three, the caution flew and set up the final double-file restart with 11 to go.

While most thought Haudenschild would take this lead change to the win, a cut tire with only eight laps left soured his shot at the lead and sent him to the work area to change a right rear tire. This would give Sweet the chance to race back to the lead and while a caution on Lap 39 set up a thrilling green-white-checkered as Donny Schatz lined up behind Sweet with the win on the line. Schatz aced the middle of turns one and two then launched a turn three slide job as the duo raced back to the white flag. Sweet was quick to react and crossed under Schatz out of turn four to withhold the lead with one to go. Schatz had one last ditch effort coming to the checkered flag, but ultimately Sweet survived to win the thriller by 0.190-seconds.

Following his $10,000 win on Thursday, Sweet would be back at it on Friday night as he and his fellow World of Outlaws NOS Energy Drink competitors would return to Odessa’s once overgrown and left for dead I-70 Motorsports Park for the first two nights of the FVP Platinum Battery Showdown. Starting the 30 Lap feature from ninth, Sweet wasn’t as heavily favored in Vegas odds as front row starters David Gravel and Brock Zearfoss. Despite the odds being stacked against him, by the final 10 laps of this race the driver of the No. 49 Napa Sprint machine was up to second. As the newest World of Outlaws king of speed found his rhythm, he would go three wide with Gravel and Zearfoss and by Lap 24 Sweet would race his way to the lead. Although a last-minute caution flag, that would lead Zearfoss hitting the wall hard in turn four, would set the stage for a restart with three laps to go.

Going back to green, Brian Brown of Grain Valley, MO made a surprise entrance and slid by Gravel as his hometown crowd cheered him. Brownie wasn’t done there as he threw a Hail Mary effort at Sweet for the victory on the final lap but feel short by only 0.440-seconds as Sweet’s #49 collected the second checkered flag of the weekend.

Following his second win of the weekend, Sweet would be back to claim the triple threat crown on Saturday night during the second feature race at I-70 Motorsports Park. Following the wave of the green flag, Sheldon Haudenschild, would lead the first 27 Laps of the 30 Lap Feature. Despite this a last-minute caution flag would give Sweet the opportunity to pass Haudenschild on the final laps of this race to give this hell on wheels driver his third win of the weekend.

“This weekend was amazing,” said Sweet. “I don’t want to get too excited though because we still have got a long summer ahead of us with a lot of big races. We have got to keep our heads down, keep capitalizing, keep executing, and keep winning. We are the best team out here and I feel like I am at the highest level I have ever been at as a driver. I want to win as many as possible this year.”

If Sweet continues this route, we are sure to keep talking about this talented driver as the summer heats up. Sweet and the rest of the gang from The World of Outlaws NOS Energy Drink Sprint Car Series will be back at it this weekend at Eldora Speedway. Stay tuned to RacingJunk.com for the latest news from the dirt.