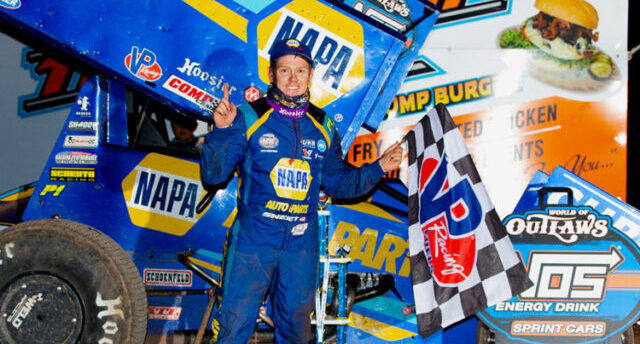 Although Kasey Kahne Racing driver Brad Sweet spent years watching 10-time World of Outlaws NOS Energy Drink Sprint Car Series champion Donny Schatz drive away with wins over and over again in double header weekends, last weekend at Beaver Dam Raceway led to a changing of the guard of sorts. After kicking off the weekend at the Wisconsin 1/3-mile dirt track, with a thrilling win following a last lap pass on Sheldon Haudenschild, Sweet drove into night two with a confidence that led to the most dominant win of the weekend.

Starting the final 40-Lap Feature of the weekend inside the top three of the 24 car field, behind team owner and fellow team driver Kasey Kahne, Brad Sweet continued to follow Kahne around pole sitter Shane Stewart in the opening laps of this race. While Kahne would lead the first 10 laps of this race, Sweet would find his way past his team owner on Lap 11 and never looked back.

His closest competitor was second-place Logan Schuchart, who Sweet continued to stay ahead of by 3.5 seconds before a caution with eight laps to go. On the restart, the driver of the No. 1S stayed in tow with Sweet before jumping the cushion in Turn 4 and hitting the wall, which sent Schuchart to the back of the field. This would give Sweet’s nemesis Donny Schatz an opportunity to battle for the race lead and win.

While it seemed like Sweet would run away with the win no matter how hard Schatz would work to take the lead, a final restart with three laps to go would give Schatz a sense of hope after Sweet spun his tires exiting Turn 4. Despite this slip, Sweet stayed determined on the low side of the track going down the front stretch, to block the lane that Schatz needed to make the pass. Going into Turn 1, Sweet went high and Schatz dove low, edging his nose ahead of Sweet. However, Sweet had the better momentum off the corner and launched ahead of Schatz’s CARQUEST Auto Parts #15 for the race win.

“This win is such a load off,” said Sweet. “You don’t know how many times I would lead a race until 25-30 laps in and drivers like Schatz would drive by me. After studying drivers like Schatz, we are finally driving into Victory Lane. I know everybody is working hard on our race team to get better and as the car gets better, I just know that we are going to keep clicking these wins off as the season continues.”

With Schuchart finishing 21st, Sweet reclaimed the points lead and is now 28 points ahead of Schatz going into the “Sprint Car Capital of the World” Knoxville Raceway on June 12-13 for the Brownells Big Guns Bash. Stay tuned to RacingJunk.com as the champions of the World of Outlaws NOS Energy Drink Sprint Car Series continue to drive back into the dirt as the 2020 race season roars back to life.