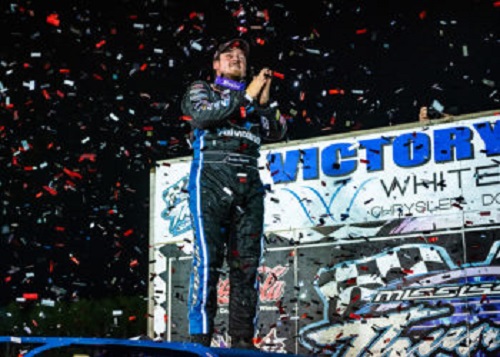 As the fall leaves start to fall and winter starts to make hints at its impending changes, the 2021 race season begins to come to a close. The first of this close began on Saturday night at the Dirt Track at Charlotte as the 2021 Champions of the World of Outlaws NOS Energy Drink Sprint Car Series and Morton Buildings Late Model Series were crowned. Beginning with the driver who seemed to be the one to beat in the Sprint Car Series this season, Brad Sweet claimed his third consecutive World of Outlaws NOS Energy Drink title after leading the series this season with 16 wins, 333 laps led, 34 podium features and 47 top-five finishes. Thanks to these impressive stats, Sweet entered Saturday’s finale with a 106-point gap between him and second-place David Gravel, so all that he needed was an impressive qualifying effort for Saturday night’s feature. Thanks to a top-10 effort, The Big Cat now becomes the fourth driver in the Sprint Car Series history to have three or more titles. Sweet would not be the only World of Outlaws driver who joined the ranks of the racing elite on Saturday night in Charlotte. In five years of being a full-time World of Outlaws Morton Buildings Late Model driver, Brandon Sheppard rocketed his way up the stats sheet to becoming one of the best dirt late model drivers of all time. The season started out slow for Sheppard, not getting a top-five finish until the seventh race of the season and not getting a win until the 15th race of the year at Mississippi Thunder Speedway, which is the longest it has taken him to achieve both in a season. Despite this, Sheppard continued to fight and although he was forced to settle for a runner-up and third place finish this weekend in Charlotte, completing his 2021 season with eight wins, 34 top-fives, and 42 top-10s gave the driver known as The Rocket the chance to become the first driver in Series history to race to his third consecutive title. 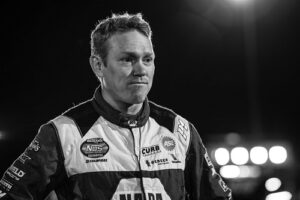 Before becoming the newest member of the racing elite on Saturday night, Sweet began this race season Sweet picked up where he left off 2020 by winning at Volusia Speedway Park. Then, throughout the year, he and his Kasey Kahne Racing team became kings of consistency, finishing outside the top-10 only 13 times in 77 starts. During the summer months, Sweet put together a stretch of 17 top-10s in a row – 14 of them being top-fives. These finishes helped The Big Cat build a solid points wall between him and championship rival David Gravel upon entering this weekend’s NGK NTK World Finals. Although Sweet would have to settle for two top-10 finishes, including watching his rival Gravel win Friday night’s 30 Lap feature, ending the 2021 season with 16 wins – tying his career-high for the most wins in a season – 47 top-fives, 64 top-10s and an impressive qualifying effort on Saturday night behind the wheel of his NAPA Auto Parts No. 49 gave Sweet his third consecutive NOS Energy Drink Sprint Car Series championship.

“In 2018 we won the Knoxville Nationals and we set our goals pretty high for 2019 for that first championship,” said Sweet. “Once you are on top of the mountain, you definitely do not want to get off it so to now get three championships in a row is AMAZING! In fact, I have to pinch myself as it all seems like it has happened so quick, and it is hard to take a breath and realize how cool it is what myself and this team are accomplishing.”

Much like Sweet, the driver who is being recognized as the best of the best in the World of Outlaws Morton Buildings Late Model Series, also added to his championship collection on Saturday night in Charlotte, NC. Although the 2021 season started out a bit rocky – without a top-five finish in site until the seventh race of the season or a win until the 15th race of the year at Mississippi Thunder Speedway, after breaking the seal on his first win no one seemed to have what it took to stop The Rocket Brandon Sheppard from becoming the first driver in Series history to race to his fourth dirt late model championship.

Since getting that first win of the year, Sheppard has not finished outside the top-10 only once and has gone on a run of 30 top-10s in a row since July with only four of those finishes being outside the top-five. Thanks to this as well as eight wins, 34 top-fives, and 42 top-10s Sheppard and his Rocket1 Racing team have earned their third consecutive championship title and have now tied Josh Richards for the most championships of all time.

“This is pretty amazing,” said Sheppard. “It was our goal going into the year to win another championship. We have been up and down this year as far as speed goes, and not as good as we wanted to be, but despite this it has been a good points year for us. To be able to tie Josh with four championships is also huge for me because I look up to him as a driver and I always have. His dad, Mark Richards, owner of Rocket1 Racing, gave me this opportunity back in 2012 when Josh was doing other things, and when he did I never thought that we would be at this point at least not this soon. This is definitely really cool.”

Congrats goes out to both of these legendary World of Outlaws champions from all of us here at RacingJunk.com. Stay tuned as we continue to wrap up the 2021 race season.