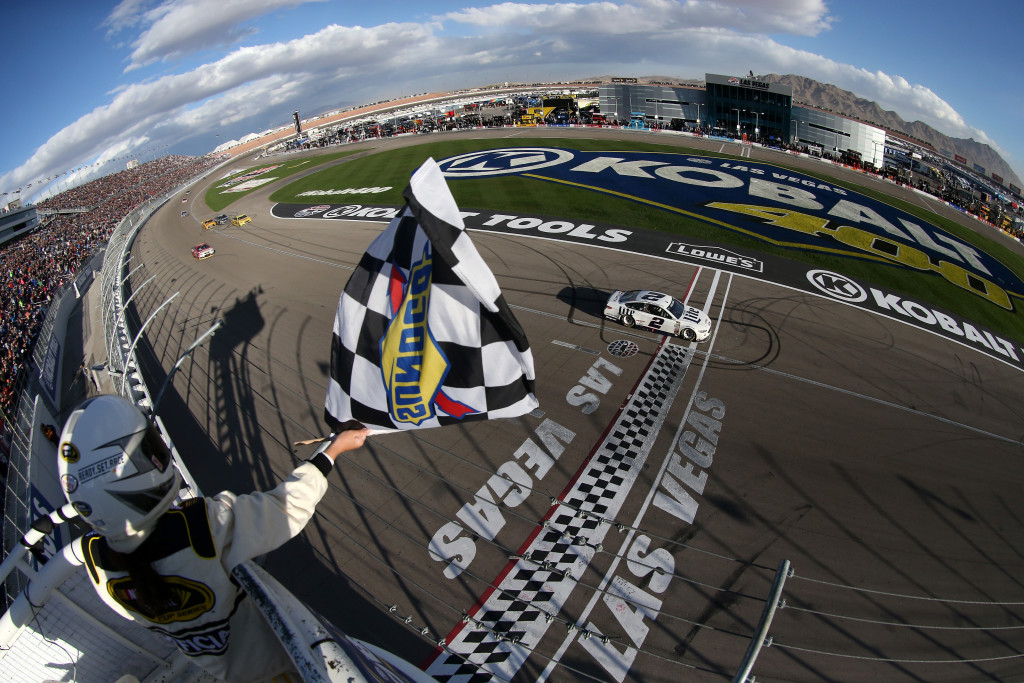 The race had come down to the final 35 laps where the Penske teams of Keselowski and Logano decided to stay out for track position in an attempt of playing fuel strategy to their benefit.  Although at first it seemed their pit strategy would go against them when on the restart Kyle Busch, who pitted for two left side tires and fuel during the caution, jettisoned from sixth flying around on the outside leaping to third.  Down the backstretch, Busch powered forward, diving to the inside of the Penske Fords stacking them three-wide traveling into the third turn with Busch blasting into the lead, looking very strong as he quickly pulled away to a full second advantage.

As the race and time wore on, so did Busch’s tires.  It was 17 laps from the finish when Logano and Keselowski began mounting their charge going after Busch having their fuel window covered by using a conservative throttle.  By now, Busch had radioed to his crew that he was developing a strong vibration from his right front tire causing him to reduce his speed greatly.  At that point with eight laps remaining, Keselowski pulls to the inside, passing Logano and taking over second.  The 2012 champion then methodically chased down Busch, passing him with six laps to go and on to his 18th Sprint Cup win of his career and Keselowski’s first victory in 33 Sprint Cup events. 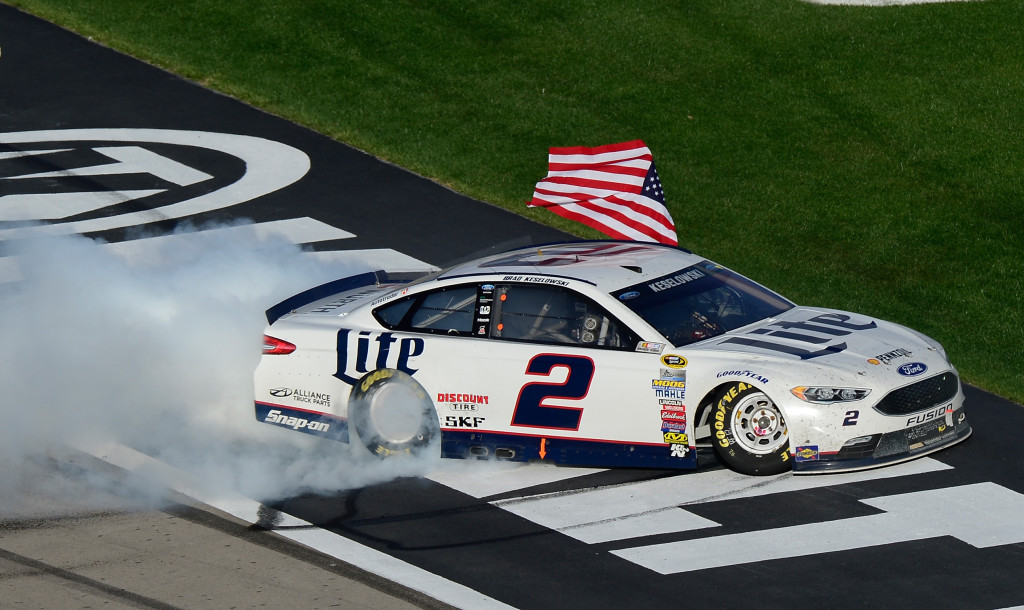 “We knew we had a lot of long-run speed,” said Keselowski, denying Busch from sweeping the weekend in taking his second Las Vegas win.  “On the restart, we were able to hold off the 48, who was really, really fast on his own.  Next thing I knew, we were closing in our teammate.  It took a long time to get by Joey.  He put up a heck of a fight.  Then, of course, at the very end, we were able to pass Kyle and get the win.  I know the local media are probably not very thrilled about that.  He had a really good short-run car, but it fell off on the long run.  It’s good to be back in Victory Lane.

“I have to say the new rules package today; I thought was tremendous.  I think you saw, where the cars fell off a lot at the end of the run and you really had to drive them sideways.  It took a lot of balance as a driver, a lot of precise footwork and accuracy with where you put your car, how you place it, which is exactly what we want.  This shouldn’t be easy.  This is the Sprint Cup Series.  These cars should be very hard to drive.  At the end of the run, they were a challenge.  It’s nice to be a part of that.”

Keselowski had to recover from an earlier pit road speeding penalty overcoming the deficit by playing his cards just right to bring him back to the front.  The final yellow flag of the day was triggered by the car of Matt Kenseth spinning in turn one taking out rookie contender, Chase Elliott while behind them, Carl Edwards and Kurt Busch, respectively, spun separately on their own.

It was during that caution period when Logano came around to bunch up with the rest of the field that he was expecting to hear from his Pennzoil crew to discuss strategy, but was met with stillness over his radio speaker.  Feeling a little anxious, he finally broke his radio silence. 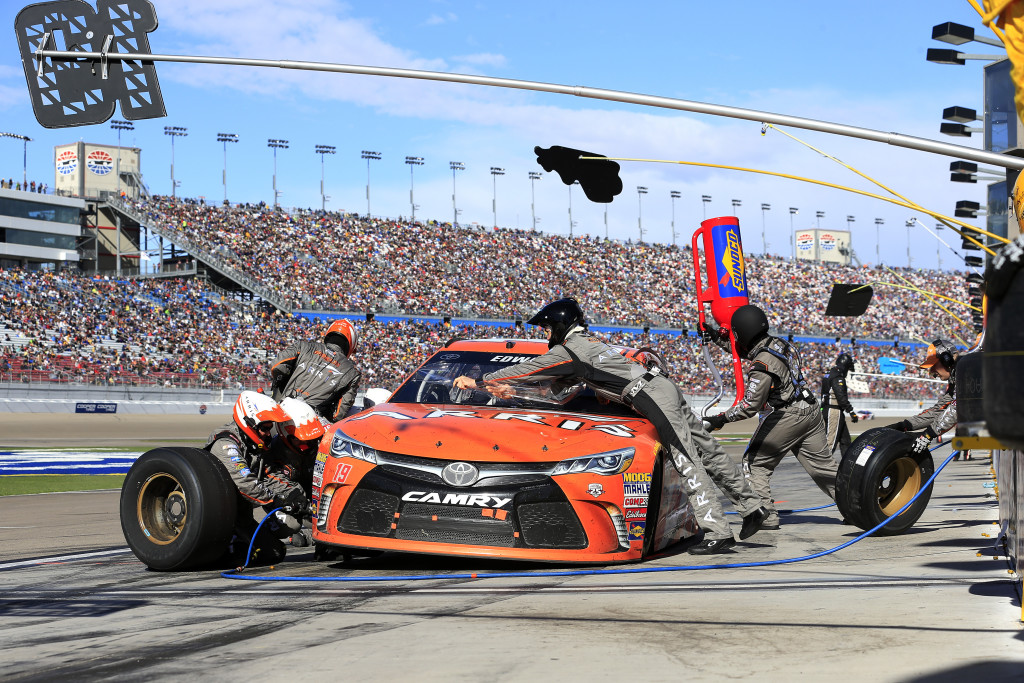 “We had four tires on our car from the pit stop before, which put us back to sixth or seventh.  When everyone pitted and put lefts or rights back on, we were on fairly equal tires, but we had our track position back, up there in the lead.  I think the way we called the race was the right strategy, for sure.”

The win for Team Penske gives Ford their first win of the Sprint Cup season and gets Keselowski in the Chase for the Championship joining Denny Hamlin and Jimmie Johnson as the only winners so far in 2016.

Throughout the afternoon, very strong wind gusts of up to 43 mph battered the Las Vegas Motor Speedway relentlessly up to the point where eventually a dust storm arose permeating through the track leaving everything coated by sand, wind pitted, and gritty reducing visibility greatly.  Even the start of the race was delayed by 24 minutes from scattered showers brought on by the constant changing winds and weather conditions. 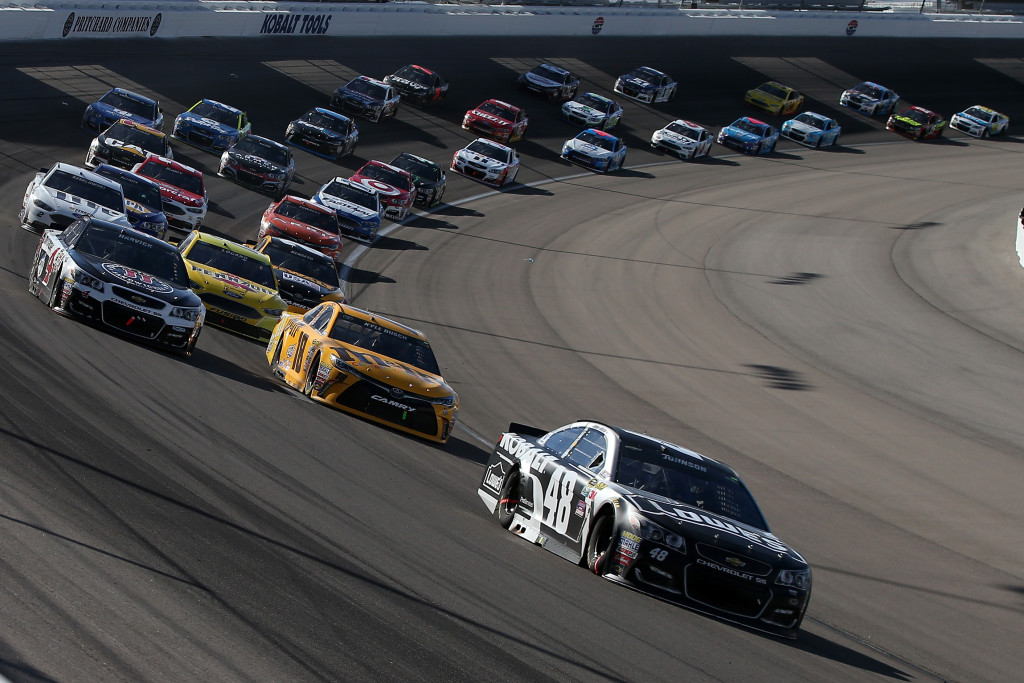 At the end of the day, the average speed of the Kobalt 400 was 138.170 after being slowed down by six caution flags for 36 laps.  There were 20 lead changes among 10 drivers with Jimmie Johnson leading the most at 76 laps.

Coming up next for the NASCAR Sprint Cup series is the Good Sam 500K at the Phoenix International Speedway on Sunday, March 13 airing on FOX starting at 3:30 p.m. EDT.