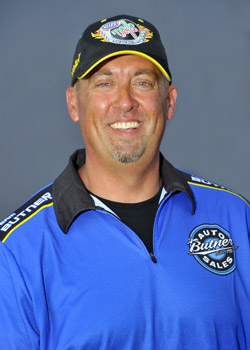 Part-time Pro Stock driver Bo Butner will be campaigning full-time in Pro Stock in the 2016 Mello Yello Drag Racing Series for the firs time ever. Butman started out in 2015 driving part-time, missing the first six races and seven of the first ten, but he still managed to finish 13th in the overall standings.

Butner’s Summit Racing 2012 Camaro made the most of the KB Racing Engines supplied by Greg Anderson and Jason Line to qualify either second or third in five of the six Countdown races, along with recording a runner-up finish at the Las Vegas fall event.

“This first season was everything that I had hoped for and more,” said Butner. “And now that we’ve made plans to run the entire NHRA Mello Yello Drag Racing Series, I’m more excited than ever. I’ve never been associated with a team like KB Racing, which has so many resources and people who work so hard. Even though Greg and Jason missed over a week with their Summit-sponsored trip to Kuwait to visit our troops, they’ve back at it now in full gear. They see the new rule changes as an opportunity to put some distance between themselves and the rest of the field, and I’m just thrilled to be a part of all of this.”

It’s been said that burnouts in Pro Stocks aren’t easy and require a precise routine of clutch release, engine revs, and gear changes, all while making sure the car is pointed straight down the strip, but Butner managed to pull it off on his first pass in a Pro Stock. Butner is no stranger to drag racing, so it will be interesting to see what he can accomplish in the 2016 season.

Butner’s background with his Sportsman career has definitely helped him to get where he is today. In his Sportsman career, he won 15 national event titles in categories like Factory Stock, Comp, Super Stock, Stock, and Super Street, and he was the 2006 Lucas Oil Drag Racing Series Comp champion. In addition, he earned four Factory Stock Showdown events. Through all of this success in Sportsman, Butnam was able to grab the attention of Anderson and Line.

“Jason first started talking about me possibly driving for them at maybe one race in 2014, but nothing came of it,” said Butner. “But things got more serious in 2015 and we talked about a part-time schedule, like six to eight races, for 2015. That was all I felt I could handle because I run our family business, Butner Auto Sales. But as the year went along, we kept adding more races and I ended up finishing the season.”

Although Butner only competed in 11 races in the 2015 season, he managed to use his seat time effectively. He qualified a best of seventh once, three times he finished in the 8th spot, and the rest of the time was between 10th and 13th. However, his inability to finish better didn’t accurately represent his driving skills.

“I feel that in the beginning I was a little bit conservative with my driving, and I think that the KB boys were similar in the tune-up. We just didn’t want to hurt anything,” said Butner. 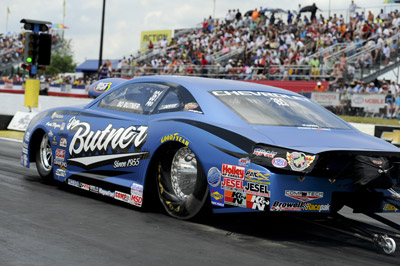 Throughout the season, the team began working more aggressively and letting their fears fall behind them, and by the time the Countdown began, Butner and his Camaro roared to life. Butner was able to win nine rounds of competition, proving that he belonged on the strip as much as anyone else out there.

“You sure do sleep better on Saturday evening when you qualify second or third as opposed to eighth or worse,” he said, “because you know you’ll have a more favorable match-up in the first round.”

Butner and his team will be taking his Butner Auto Sales Chevrolet Camaro to the strip full-time in 2016, and they anticipate a successful season.

“Of course we’ll be aiming to finish in the Top 10 so that we can compete in the Countdown this time,” said Butner,” but to be honest with you, I’ll be shooting for the championship. I know that I will be working with two very talented drivers that have the same aspirations, so that will be interesting.”

While campaigning his Camaro full-time, Butner will still have to balance work with pleasure. He will be keeping a close eye on the Auto shop while his 24 employees help out, making up for time when he is on the road. If his past successes in both Sportsman and Pro Stock are any indication, he’ll have no trouble keeping it all under control.