The first event of its kind for the World of Outlaws Craftsman® Late Model Series gave two young drivers a pair of unforgettable World of Outlaws Series wins. After enduring a battle with Mother Nature over the last 62 days, this series hit the dirt again over the weekend for the first annual Queen City Shootout at Whynot Motorsports Park.

The first of two 50 lap feature races began Friday night with New Berlin, IL’s own Brandon Sheppard finding his way to the first $10,000 win of the weekend. After qualifying 21st, Sheppard started his heat race in fifth place. He would have to finish in the top three to secure a transfer spot into the feature race.

After accomplishing one goal, Sheppard moved on to become one of the most dominant drivers in Friday night’s feature. Despite starting a little further back in the field by lap 13, Sheppard moved into the second position behind pole-sitter and race-long leader Chris Madden. With nine laps remaining, Sheppard made his way to the top of the field and took this pass all the way to Victory Lane for the second time this season.

“This was definitely not an easy race to win,” said Sheppard. “The track was really tricky tonight. The line kept changing all over the place. I could roll the middle there pretty good for a little bit, and then I could go to the bottom, and then I could move up, and then the middle got dirty there. Everything just worked out for us. We were really fortunate to be in a position to take the lead as well as the win.”

Sheppard wasn’t the only driver to pick up an exciting win during the World of Outlaws first annual Queen City Shootout. After a second-place finish in qualifying as well as a heat race win, Batesville, Arizona’s own Billy Moyer, Jr. drew the outside pole position for Saturday night’s Craftsman Club Feature. 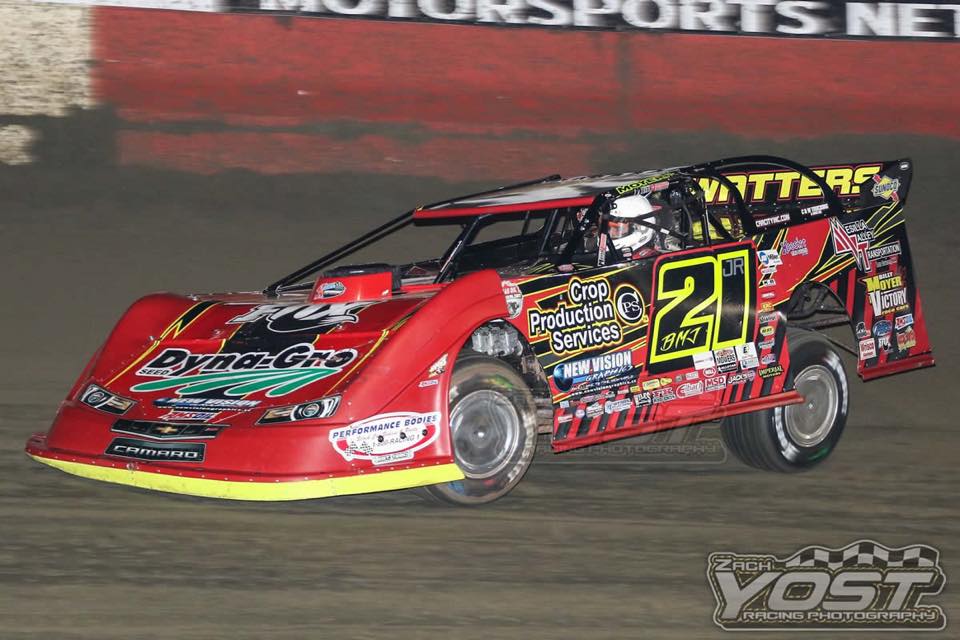 Within the first lap, Moyer Jr. took command. Despite leading the first 18 laps, Moyer handed the lead over to Mississippi driver Brian Rickman. Moyer Jr. also had to hold off the No. 25 of Shane Clayton, who battled the hard-charging driver for a photo finish with only 0.0645-seconds.

Overwhelmed with emotion as he climbed out of his No. 21, Moyer Jr. explained that his first win of the 2018 World of Outlaws season didn’t mean as much as he thought that it would after some unfortunate news that was received right before the race.

“This race really did not mean as much as I was thinking that it would after receiving the phone call that I did right before this feature race,” said Moyer Jr.

The call that Moyer refers to involves his newborn daughter Hallie Rae Moyer, who is currently fighting a health problem.

“I just wanted to get home to her,” said Moyer. “Don’t get me wrong, I want to make a living and to win, but I needed to get back to Arkansas as quick as I can to be with my family.”

Congratulations to both new World of Outlaws winners, and our very best wishes go out for the speedy recovery of Hallie Moyer.

The champions from the World of Outlaws Craftsman Late Model Series return to racing action at Smoky Mountain Speedway, for the Tennessee Tipoff on Friday and Saturday, April 27-28. Stay tuned to RacingJunk.com for all of your dirt racing coverage.