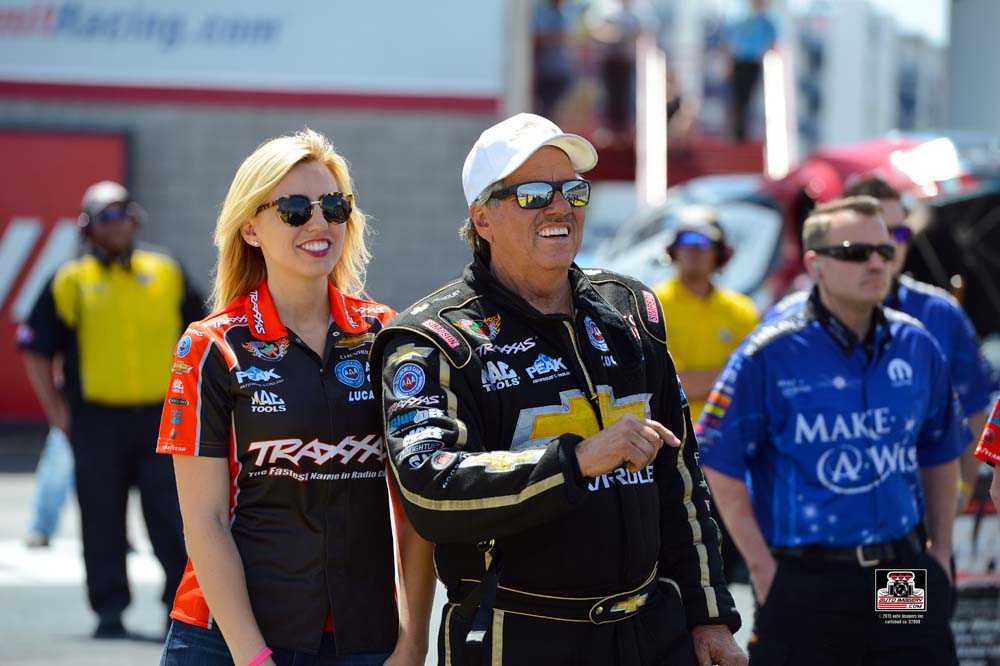 It’s official! The NHRA Mello Yello Drag Racing series is back on track and we at RacingJunk are excited to be feeling the Force behind the next generation of drivers who are following in the tire treads of those well-known motorsports legends out there. After sliding Behind The Wheel with one of the most famous names in the NHRA recently, we decided to find out how the John Force Racing family continues its drag racing success with daughters Brittany and Courtney Force.

The youngest member of the John Force Racing family, 27-year-old Courtney Force began her racing career a month after obtaining her driver’s license by making the decision to enroll in drag racing school to obtain her Super Comp drag racing license.

“At a very young age, probably 7-years-old or so, I knew that I wanted to race just like my dad,” said Courtney. “I loved watching him compete, being out at the track with his crew and even traveling across the country and seeing new places I was just enthralled with it all and knew that I wanted this to be my future.” 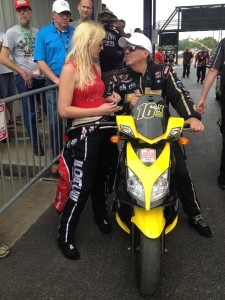 By 2005, Courtney began to see her future in racing begin as she slid behind the wheel of a Super Comp car in the NHRA Lucas Oil Drag Racing Series. After finding success in her Super Comp car during her first two years of competition the younger daughter of drag racing phenom John Force, began competing in a Top Alcohol Dragster in the NHRA only three years later.

“After witnessing what my dad was able to accomplish and becoming addicted to the speed of the cars, I knew that I wanted to stand up to a challenge and this seemed like the next step to feeding this need,” said Courtney. “The most difficult part of this time in my racing career was earning my bachelor’s degree all while trying to pick up wins.”

While Courtney picked up her first win in a Top Alcohol Dragster her true desire was to follow in her father’s illustrious tire treads.
“The funny thing is my parents once thought that this was something that I would grow out of, but after I finished school my dad realized that racing was my primary focus so he put me through what he called his Funny Car 101 training,” said Courtney.

What exactly does this involve? “He was towing me around behind his pickup truck in a funny car with no motor just to get the feel of it because I was so used to driving a dragster.”

After obtaining her funny car license in 2011, Courtney had to pass the final test by obtaining a sponsor, for her future to officially begin. 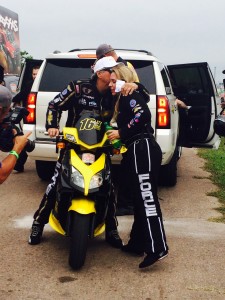 “Dad asked a representative from Traxxas to come to Las Vegas to watch me make a pass, and this wasn’t any pass it was in the dark,” said Courtney.

How did she pull this off? “This was my first pass at 300 miles per hour and I didn’t know how I was going to pull this off, but the advice that my dad gave me helped me not only make the unbelievable pass but pick up a sponsor that has stayed with me over the last four seasons.”

Today, Courtney is continuing to turn heads and blow away the competition much the same way that her mentor and father has in the NHRA Funny Car Series.

While John Force has been a prevalent influence on his youngest daughter he has also helped another daughter find success in the world of drag racing.

Brittany Force began her racing career in much the same way as her older sister Ashley as well as her younger sister Courtney, in a Super Comp car.

“Although I loved being at the track, I always thought drag racing was a male sport,” said Brittany. “So I didn’t really think that I was going to go racing, until my older sister Ashley did.”

After racing in the entry-level class against her sister Courtney for three years, Brittany moved up to an NHRA Top Alcohol Dragster where she not only became the top qualifier at the 2009 SuperNationals at Englishtown, N.J., and at the 2010 O’Reilly Winternationals at Auto Club Raceway at Pomona, Calif., but also proved to her legendary father that she had the talent to compete with the top performers in the sport.

“In 2012, my dad and others at John Force Racing gave me an opportunity to test a Top Fuel dragster,” said Brittany. “The funny thing is that if you would have asked me six years ago, whether I would want to compete in a Top Fuel car I would have replied with a resounding NO!”
Although she was unsure at the start of her Top Fuel career, much like her fellow John Force teammates, Brittany quickly became a success and even earned the NHRA Rookie of the Year in the Top Fuel series in 2013.

In 2014, Brittany even joined her younger sister Courtney in the history books by becoming the first sister team to qualify No. 1 in each of their respective series at the NHRA Kansas Nationals. Although she wasn’t sure that she could stand out against the males that continue to primarily dominate this sport, Brittany ended her 2015 season inside of the top-10 in points.
“Although I wasn’t sure that I would take the same path as the rest of my family, I can’t imagine my life without drag racing,” said Brittany. “It feels like home.”

As the Force Racing family continues to revel in their success, we at RacingJunk wish them luck in 2016. Stay tuned to this site for continuing NHRA results and we hope that all of our female racing fans will take the advice of rising drag racing stars like Brittany and Courtney Force who have the same recommendation – “never give up on your dream!”