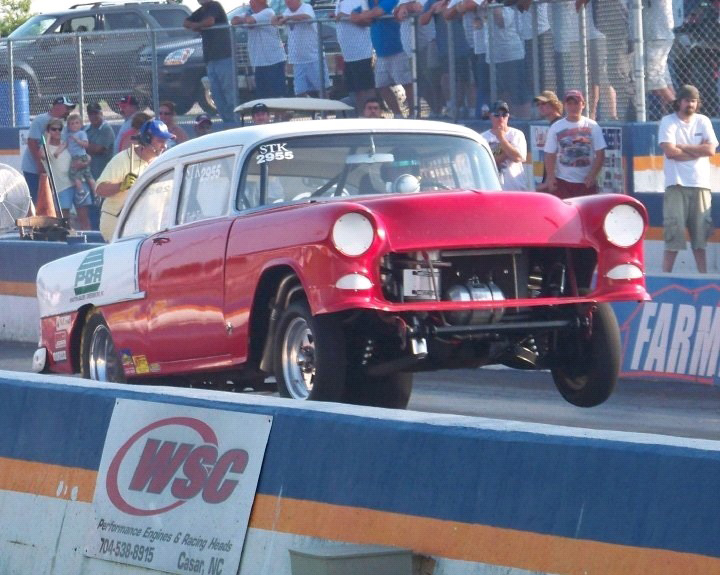 There was a time when many drag racers competed not necessarily for the highest dollar that they could earn or even to race their ways up the ranks of either the NHRA or IHRA. Competitors like Tom Cobbs and Fran Hernandez brought some of what most of us car aficionados consider true classic hot rods to the first open street legal drag race in Santa Barbara, California. Tom Talmon uses his love of old school automobiles by competing in what continues to be a very popular form of drag racing today.

Talmon, who currently spends most of his free time either working on or racing his 1955 Chevrolet Bel Air alongside his fellow Classic Gear Jammers, found his love for drag racing at the tender age of 17-years-old.

“When I was growing up in Upstate New York, I loved to go out in the garage and tinker on cars with my dad, which I guess sparked my interest in racing,” said Talmon. “The best part is that 34 years later my father is still assisting me in my racing and joins me at the track as much as possible.”

While this car enthusiast’s original plan was to build a stock car to compete at his then home track Spencer Speedway, Talmon discovered that his true path to drag racing was just being paved.

“While I wanted to go stock car racing when I was younger, I quickly discovered that it was just too expensive,” said Talmon. “That is when I found out that I could take my street car – a 1970 Chevrolet Nova – to the 1/10 mile drag strip and see what I can do.”

Talmon, a landscaper, and his fellow weekend warrior buddies quickly found that this is how they would spend most of their Saturday nights. “While I was going to high school, I was also working for a landscaping company where most of the guys were drag racing, so we would spend our weekends making passes on Spencer Speedway’s 1/8 mile in our street legal stick shift muscle cars,” said Talmon.

This classic style of drag racing was truly a match made in weekend warrior heaven for Talmon who also found that he had the talent to not only compete, but do everything necessary to his car on the track each week. “When you are a kid and you’re bit by that need-to-compete bug, you do anything that it takes,” said Talmon. “I actually remember one weekend when the transmission in the Nova went out so I pulled the transmission out of my mother’s Camaro and put it in my car just so I could race. The best part was having to get up early the next morning to get this back in her car so that she could go to work on Monday morning.”

As his college career began, this true definition of a weekend warrior didn’t let the fact that he was on a tight budget stop him from continuing to compete. In fact, this is where Talmon’s love affair with the 1955 Chevrolet Bel Air began.

“I was introduced to the man with two first names, Larry Larry, while I was in college and he was selling the 55 Bel Air that I am driving now,” said Talmon. “The best part was being able to get this car and the bell housing for a mere $1,600.”

While Talmon felt he had made the best low-cost purchase possible, there was one snag – “I thought putting my 1970 Nova motor in the car was the best idea, but it just wasn’t fast,” said Talmon. 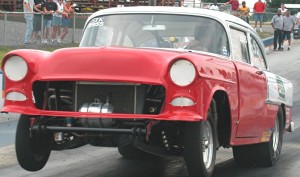 Fortunately, a little help from a new friend would lead to a perfect car and driver match. “My new friend Larry lent me a motor, which with a little more fine-tuning made this car continue to find its on-track rhythm,” said a very nostalgic Talmon.

After several years of ongoing cold weather Talmon and his new family made the move to North Carolina in 1993. “After having to struggle through the winter of 1993 in New York my wife and I knew that it was time to move on to greener pastures if I didn’t want to start driving a snow plow everywhere full-time,” said Talmon.

Why did this true country boy at heart also want to leave the town that he grew up in? Racing of course! “North Carolina is a great area to go if you want to compete in any form of racing – especially drag racing,” said Talmon. “It almost doesn’t matter where you live in this state there are at least 10 to 12 tracks that are just within a few hours from each other where you can compete.”

Although the sport of drag racing was rapidly changing by the late 1980s and early 90s, this traditionalist wouldn’t let a change of scenery or newly emerging competition change his ways when it comes to drag racing. “This is actually why I was so happy to find the Classic Gear Jammers,” said Talmon.

This group of nostalgic drag racers truly focus on the old school side of drag racing. “A lot of the competition that fans were starting to see more of and are continuing to see today is shifting towards automatic transmissions, delay boxes and nitrous oxide,” said Talmon. “What is great about myself and others who compete with the Classic Gear Jammers organization, is we stick to the simple rule of no nitrous, delay devices, no clutch-less or planetary transmissions, and only foot activated clutches allowed….We are where drag racing was 40 years ago – on the most level playing field in racing possible.” 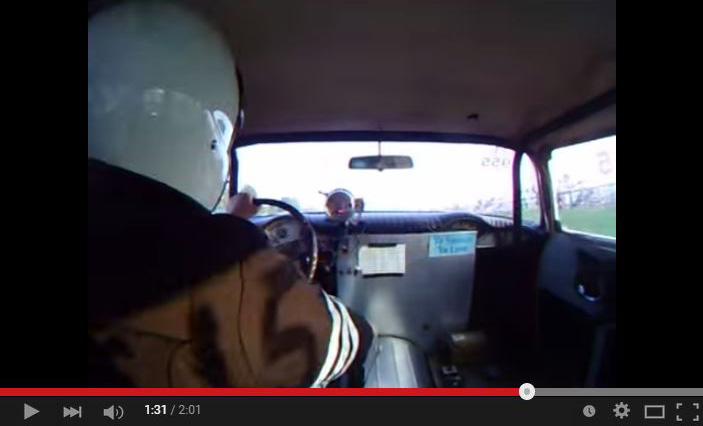 After competing with this organization and winning two points championships, it wasn’t long before the passion to keep old school racing top of mind for drag racing fans led Talmon to become President of the Classic Gear Jammers. “I just became so die hard to see this form of drag racing and its competitors succeed that I felt that it was my duty to help in any way that I could,” said Talmon.

While continuing to serve as a board member for the Classic Gear Jammers today, Talmon also continues to compete in what he calls his favorite car as much as possible. “Although it might be fun to drive something like a Pro Stock someday, racing with the Classic Gear Jammers is some of the most fun and best deals in racing possible, especially with the great parts that are available now,” said Talmon. “How else can you go six seconds at 115 mph all while keeping drag racing the way that it started 40 years ago?”

In order to further promote this form of racing, Talmon and a few of his fellow Gear Jammin’ friends even shot a pilot for a reality show that they had in mind entitled ‘Shifters USA’. Although this show never got past the pilot episode this truly shows the heart Behind the Wheel of drivers like Tom Talmon. 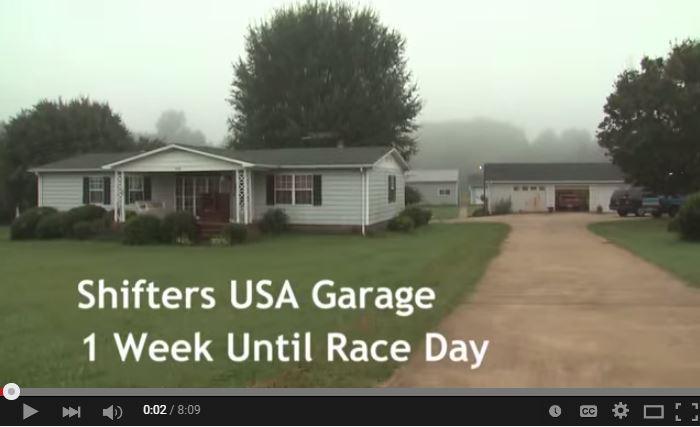 We will continue to follow the lives and careers of veteran drivers like Gear Jammer Tom Talmon so stay tuned for more about your favorite weekend warrior stars exclusively on The Burnout at RacingJunk.com.