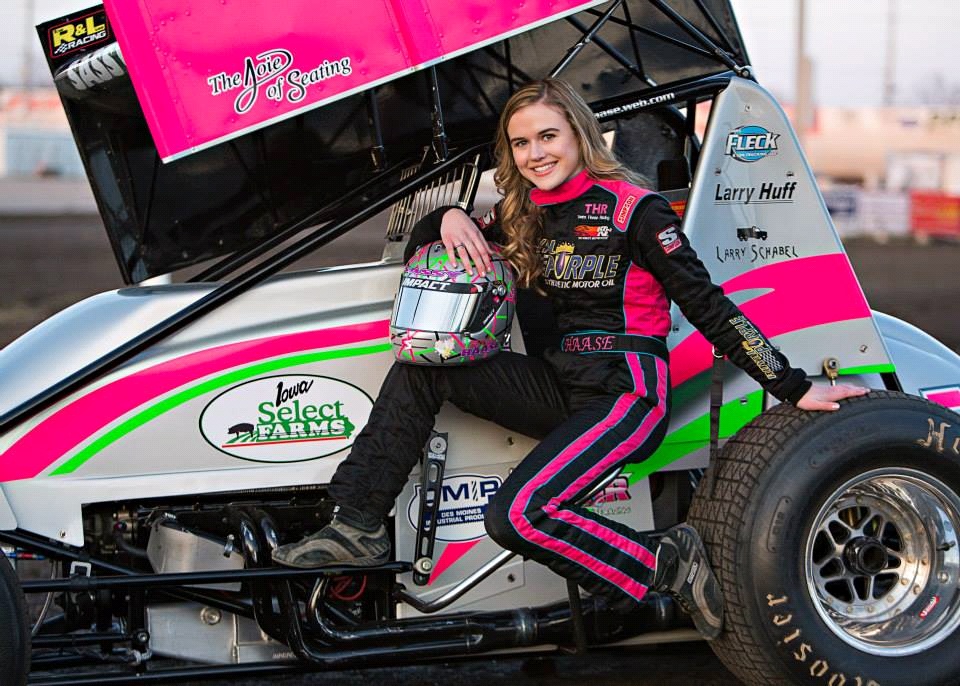 Behind the Wheel With Sprint Car Diva

The landscape of the motorsports world is quickly changing from a male dominated sport to one where more females are proving that they have just as much guts and talent to beat the boys at their own game.  RacingJunk.com‘s next Behind the Wheel driver, 18-year-old McKenna Haase, recently became the first woman ever to win a dirt Sprint Car race at the ‘Sprint Car Capitol’ Knoxville Raceway, in Knoxville, IA.

Currently in her second season in the Lucas Oil Championship Cup Series, Haase was competing in only her second event of 2015, on May 16, where she used the final few laps of this race to take the lead and become the first female to win a Sprint Car race at her home track. 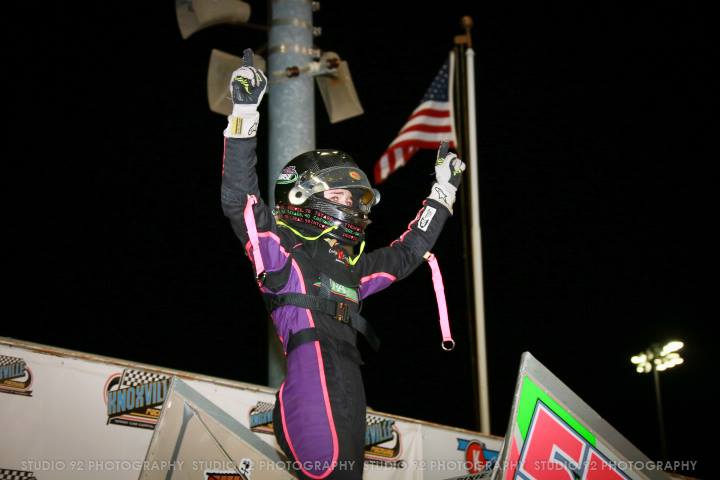 “It’s funny because this is the night that I told everyone that I wanted to win because I had family in town for my high school graduation, which was the very next day, and I wanted to be on the podium two days in a row,” said Haase.

Now, this young dirt diva is not only the crowning glory of Knoxville Raceway, but she is making headlines throughout the motorsports world, including an appearance on ESPN following this historic win. 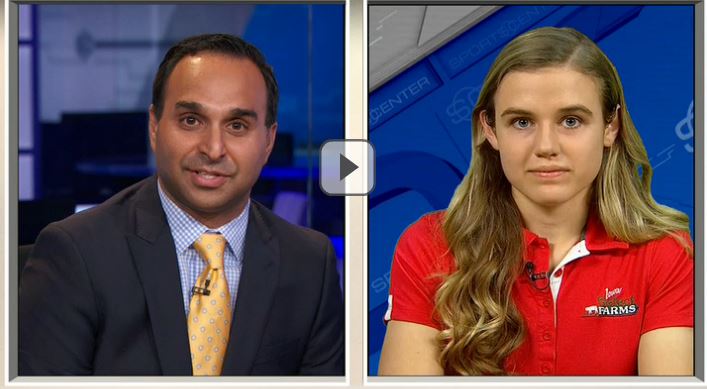 So, how did this young motorsports star get to the top so quickly?

“I actually decided that I wanted to go racing when I was in the third grade,” said Haase.  “I ran into NASCAR Sprint Car driver Kasey Kahne at a shopping mall in Tennessee and I started following racing in general, there after.”

Unlike many young up-and-coming drivers, Haase does not come from a motorsports family, so deciding that she not only would be following racing religiously, but eventually become a successful driver meant she had a challenging road ahead.  Despite this challenge, after returning to her home state of Iowa Haase began doing her homework.

“This is how I found out that even younger kids could race, but I wasn’t sure where I should get started,” said Haase.
After attending a race at Iowa Speedway everything became clear.  “I went to my first NASCAR event to watch Kahne race and while there I came across a display for Sideways Karting Center,” said Hasse.

Within two years after discovering her love for motorsports Haase was competing.  “I began competing in a karting league with mostly men, which featured karts that looked much like dirt wing Sprint Cars,” said Haase.

After competing in a go-kart on asphalt for two years, Haase began her next step in her racing career at English Creek Speedway, a dirt track in Haase’s hometown for kids with a desire to go dirt track racing.  “After attending several of the dirt kart races here, one night in August 2009 I was given an opportunity to get behind the wheel of one of the Box Stock Outlaw Kart after the races were over – this after begging to give try my hand at this for about three years,” said Haase.  “After this test, I knew that I wanted to go Winged Sprint Car racing.”

While it is easy to set your eyes on a dream, it is not always easy to achieve this dream.  “Like many kids with this kind of desire, I asked my parents to buy me an Outlaw Kart that I could compete with at English Creek,” said Haase.

Not necessarily granting her wish, Haase’s parents insisted on effort on her part to find the funding to go racing.  “Through a lot of hard work, I was able to pay for most of the kart myself and I raced on dirt for my first time at English Creek in 2010 and 2011,” said Haase.

After 16 wins in her two years of racing in her Box Stock Outlaw kart, Haase moved up the ranks to Open Micro Sprints at the tender age of 15-years-old.  “This was cool because this is the first time that I had an opportunity to travel all over the country and race,” said Haase.

Despite only racking up a couple feature wins, Haase was also a regular top-10 finisher at over 10 tracks across the country before moving to the next level – 305 Sprint Cars.

“Once again, before I could move up to what I consider a real stepping stone in my career I had to raise money, said Haase.  Fortunately, I have had a lot of support from my sponsors and even went door to door selling batteries to fund the start of my dirt Sprint Car career.” 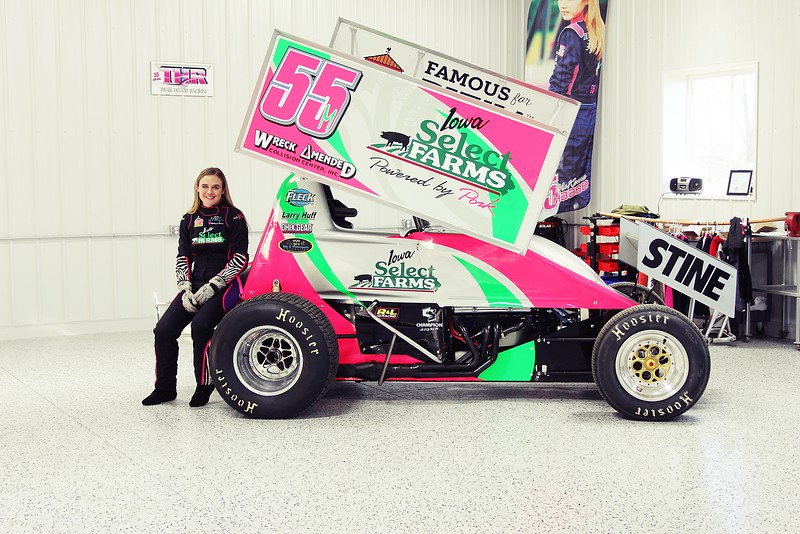 After raising the money needed to compete against some of the ‘big guys’ in dirt Sprint Car racing, Haase set her sights on the Sprint Car Capitol of the World – Knoxville Raceway.

“One reason that I wanted to continue dirt track racing is living 45 minutes from the Sprint Car Capitol Of The World,” said Haase.  “I had been told that this is where I could really prove myself and I just took this as a sign to keep my racing going in this direction.”

Today, Haase has continued to shoot to the top of the 305 Sprint Car field at Knoxville Raceway, including her recent win as well as being the only female within the top-10 battle for the 2015 points championship at Knoxville Raceway.  As her favorite saying goes, ‘All you need is faith, trust and a little pixie dust,’ the racing career of McKenna Haase is sure to continue to be a success. 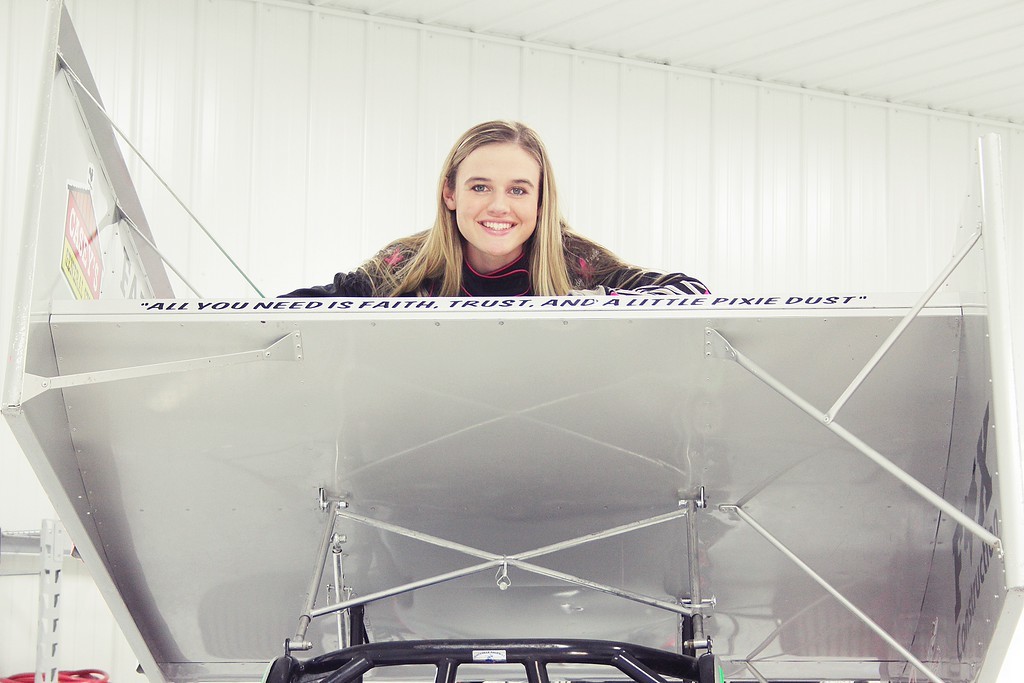 Now both the recent valedictorian and superstar of Sprint Cars where will this dirt diva land next? “While I hope to continue racing and maybe even someday race in the World Of Outlaw Series, I am also headed to Drake University in the fall to study finance,” said Haase.  “I actually have an interest in the stock market as well as racing so I wanted to learn more about this side of business and, who knows, maybe I can even tie this into my racing career?”

While being unsure of how her future education will tie into her love for racing, the knowledge that she has already gained in motorsports is currently being used to teach other kids who have a desire to compete.  “I began a driver development program called Compass this year so that I can have an opportunity to help another young kid’s dream come true,” said Haase.  “My hope is that my future will also be involved in continuing to give back to the youth of racing and help the future of the sport grow and develop.

No matter where this young rising star lands, RacingJunk.com sends their thanks and well wishes out to McKenna Haase and hope to see her Behind the Wheel far into the future.

2 Comments on Behind the Wheel: McKenna Haase