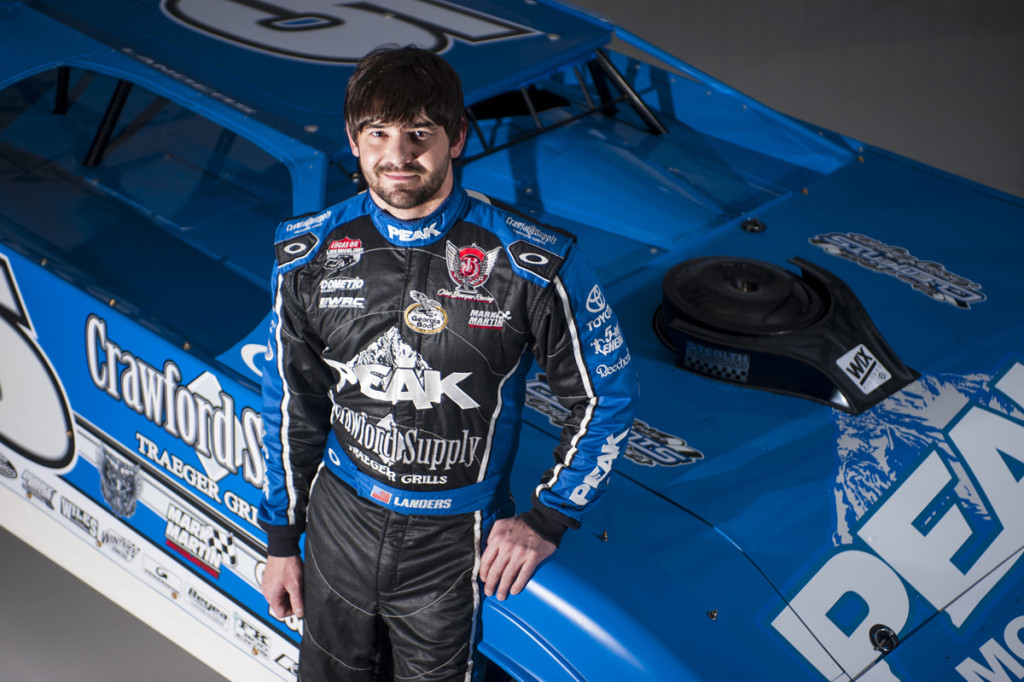 Most short track racing fans know that the history of this exciting sport not only began on the back roads of little towns, but also in the dirt.  In fact, most of the most talented drivers such as Mario Andretti, Lee and Richard Petty, Ralph and Dale Earnhardt, Jeff Gordon and Tony Stewart  began their successful racing careers in the dirt.  RacingJunk.com‘s featured Behind the Wheel driver, Jared Landers, who is continuing to prove that dirt track racing is still one of the most challenging forms of this sport, hopes that his name will someday also be in the spotlight.

Like many of top motorsports stars, this 33-year-old dirt slinger from Arkansas began competing at a very young age.  “My dad was actually racing before I was born and after stepping out of the car he began working in the car sales business, which ultimately led to the start of my racing career,” said Landers.  “Shortly after starting in this side of the automotive world, my dad and his company began sponsoring well known drivers like Tim Crawley, who competed in a winged Sprint Car, and Terrell Chastain, who raced in the modified class.  I got to know both of these competitors pretty well and it wasn’t long before Crawley took me under his proverbial wing when he built my first dirt go-kart and taught me how to drive.”

For the next couple of years, the young driver would continue to learn everything that he could about competing in the dirt from those whom he considered his mentors.  “While I raced my go-kart for a couple of years, I actually took a few years off to watch and assist some of the top drivers, like Crawley and Chastain, compete at what I still consider my favorite track, Batesville Motor Speedway, in my hometown of Batesville, Arkansas,” said Landers.

With a little help from his friends, Landers was once again ready to jump back Behind the Wheel at the age of 17.  “Along with my father and Terrell Chastain, I was able to compete in an old modified at Batesville before my dad decided that it was time that I had a chance to compete in a new and improved dirt modified,” said Landers.

It wasn’t long before this ‘take no prisoners’ competitor found his niche and began winning races throughout the Northeast.  In fact, Landers picked up over 100 Open Wheel Modified Feature wins, including a very memorable win at the 2011 Winternationals at East Bay Raceway Park, in Tampa, FL.

With a desire to continue finding the most challenging forms of circle track racing possible, Landers would eventually jump out of his modified to prove that he had what it takes to compete in a late model.

“After realizing that I could drive around much of the competition in the modified field without having the perfect ride, I realized that it was time to take on the next challenge, late model racing,” said Landers.  “Driving a dirt late model is a whole different ball game because there are so many very talented drivers competing and your car has to be spot on to even finish in the top-5 against these guys.”

While showing some serious success in a modified, Landers also proved that he could keep picking up checkers in a late model.  So much so, that this driver made the move from his hometown of Batesville, AR to the hills of North Carolina.

“I actually moved to Welcome, NC to assist Austin and Ty Dillon in their dirt modified racing efforts and even built a dirt modified for them to race at the DIRTCar Nationals, at Volusia Speedway,” said Landers.

During his time with Team Dillon Racing, Landers also had a chance to get to know well known NASCAR Sprint Cup star Clint Bowyer.

“Clint asked me to assist with his team’s dirt modifieds and late models and before long was asking me to drive one of his late model cars,” said Landers. 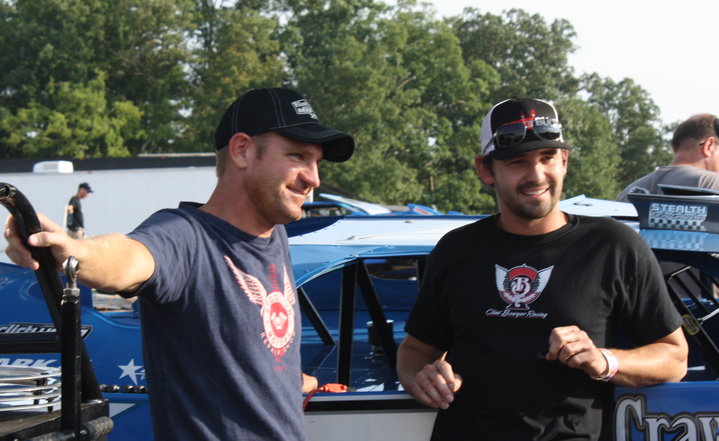 During his time competing for Clint Bowyer Racing, Landers also developed a relationship with NASCAR driver, Mark Martin.  Martin, who was very impressed with the talent that he saw in this dirt racing phenomenon, aided him in his first NASCAR start when then the NASCAR Camping World Truck Series made its return to dirt at Eldora Speedway in 2013.

“I actually sat on the inside pole for the first annual Mudsummer Classic at Eldora Speedway after Ken Schrader chose the outside,” said Landers.  Not only did he earn the pole but finished just outside of the top ten against some very challenging competitors.  “I had never raced a heavy car like that on dirt so I feel that I was at a rather large disadvantage, but we still managed to pull off a solid finish.” 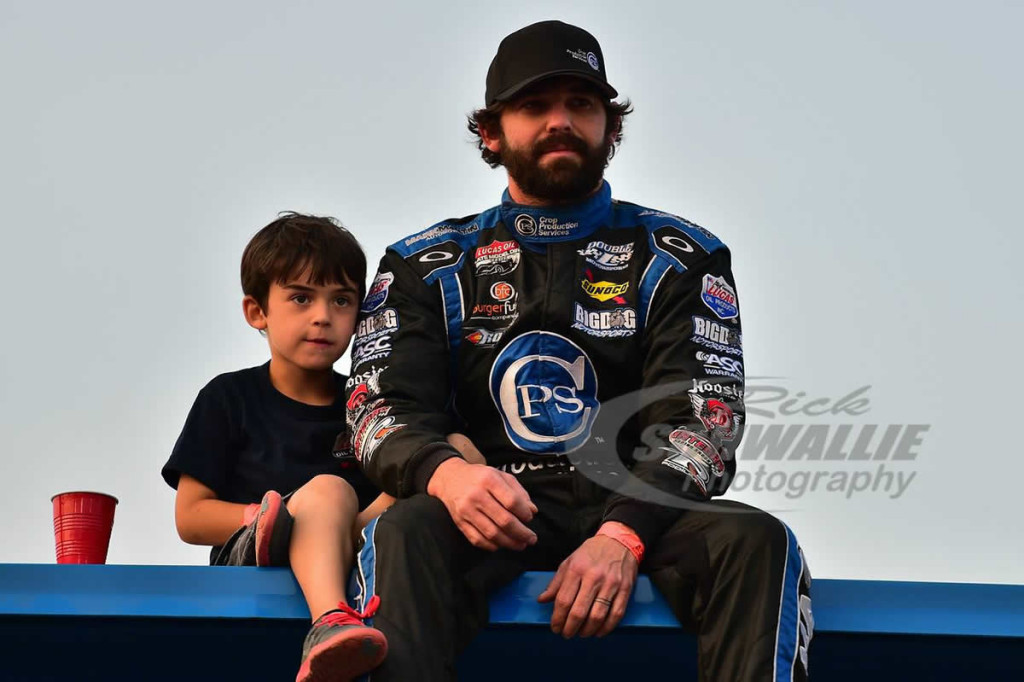 After struggling through his final year with Clint Bowyer Racing in 2014, Landers decided that it was time to move his family back home to Arkansas to continue in the sport that he loves the most.
“The money racing with Clint Bowyer Racing began to dry up and our kids’ school season was beginning.  My wife and I didn’t want to pull our kids out of NC schools in the middle of the year and I was ready to begin not only racing a car, but working on it as well so we made the move back to my hometown of Batesville, AR.

Ever the family man as well as the full-time driver, Landers may have made the best decision of his life after making the move back home because today his full-time dirt late model career has led to racing for his partner co-owners, including his father and Mark Martin and winning races.

In fact, Landers recently landed a BIG WIN in the Midwest Late Model Racing Association’s Spring Nationals, sponsored by RacingJunk.com at Lucas Oil Speedway.  From the drop of the green flag on that Saturday night, Landers proved that he had the car to beat after leading all 40 laps of this race. 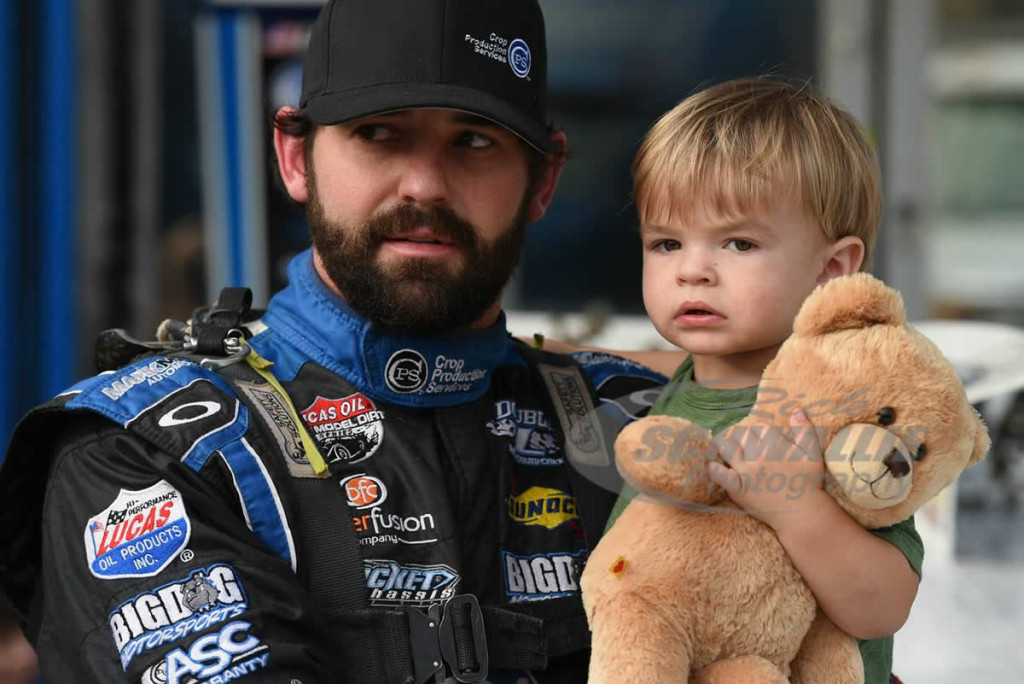 “My car was so great that whole weekend,” said Landers.  “My team really put a lot of effort into the car that whole week and we were so blessed to race our way from the pole to a win on Saturday night.”

As Landers continues his dream, we will continue to follow his climb up the dirt tracking ladder.  For more about the circle trackin’ warriors of the MLRA Dirt Racing Association stay tuned to RacingJunk.com and check out the video below to watch Landers in action!