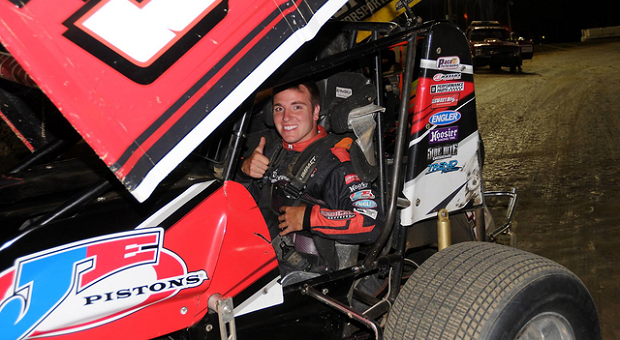 Now that the football season is finally over, it’s time to kick the 2018 racing season into high gear. We’re excited to do so with our latest edition of Behind the Wheel – the podcast.

What better way to kick off what we hope will be an unforgettable season than by talking to a driver who can keep each one of his fellow drivers – as well as the rest of our fans out there – motivated to push through anything that may hold them back?

Former motocross rider Eric Saunders fell in love with racing at the age of 6 years old when he began competing on two wheels. After 12 years of impressive competition, Saunders’ view of his future in motocross took a drastic change. In August of 2010, while practicing on his backyard motocross track, Saunders got crossed up from a jump and landed sideways, which ultimately left him paralyzed from the waist down.

While many might consider retiring from motorsports entirely after an injury like this, the then-18-year-old driver was determined to find some way to compete. Thanks to some help from a few famous motorsports stars like Tony Stewart and fellow paralyzed racer Shane Hmiel, Saunders found a renewed determination to race again. Using the now famous mantra “I Can, I Will,” this strong-willed driver is now proving that anything is possible while he burns up dirt tracks on four wheels throughout the country.

Tune in to the latest edition of Behind the Wheel and let this inspiring driver motivate you to achieve success this racing season despite any obstacles that may be in your way.

To find out more about Eric Saunders, check out Saunders Racing on Facebook, Twitter and Instagram. Do you have suggestions for the Behind the Wheel podcast this season? Drivers you think would made great interviews? Let us know in the comments below.