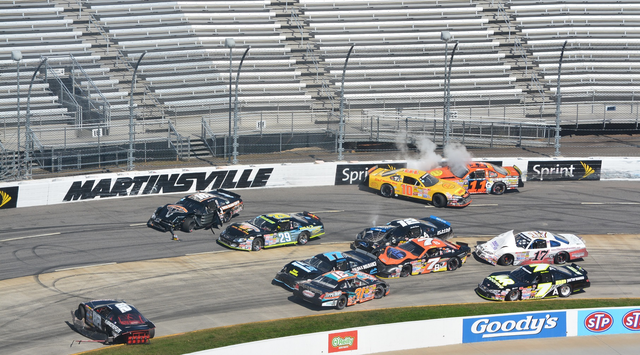 One of the most popular late model races of the 2017 race season will take place at the paperclip in the Ridgeway, VA. The checkered flag will wave at the historic ValleyStar Credit Union 300 this Saturday, September 23. The biggest, richest, most prestigious NASCAR Late Model Stock car race in the country, will feature the Southeast’s most talented late model stock car drivers, who will each compete for $25,000, a grandfather clock and most importantly, bragging rights for a year.
In the latest edition of our new and improved Behind The Wheel podcast, readers will have a chance to find out more about this race and why this year’s ValleyStar 300 is going to be unlike any in the history of Martinsville Speedway.

Our first guest in this edition is the man with the plan, Martinsville Speedway PR Director Brooks Taylor who has done his part to assure that both racing competitors as well as fans experience one of the most exciting Saturday night races of the season.
While Brooks will tell you why you should make the trip to this race, we have also welcomed a driver who will be making his second start in a race that few famous drivers, like Dale Earnhardt, Jr., have even had the ability to qualify for.

Young gun Ryan Repko began competing in a Quarter Midget before moving up to Limited Late Models and eventually heavy-duty Late Model Stock Cars. While he has continued to burn up short tracks across the Southeast, Repko has yet to pull off a win in this prestigious race although he managed to qualify his first time out.

Tune in below to find out more about one of the most popular races in the Southeast as well as why drivers would do anything to win the bragging rights that come with it.

To pick up your tickets to the ValleyStar Credit Union 300 at Martinsville Speedway visit HERE.
Do you have suggestions for the podcast? Guests you think would made great interviews? Let us know in the comments!