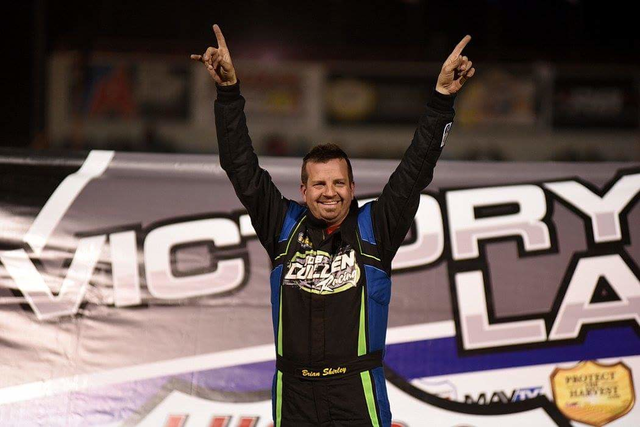 While there are many legends of racing, there are also those who are driving towards this status. Brian Shirley is quickly racing his way into the motorsports history as he racks up wins at dirt tracks throughout the nation.

RacingJunk.com caught up with Shirley after his dominating victory at this year’s MLRA Spring Nationals to find out more about his winning ways.

Shirley had a love for things that go fast at an early age. “My dad raced dirt bikes when I was growing up and it wasn’t long before I wanted to do the same,” said the Chatham, IL native.

Shirley was quick to jump on his first bike and become one of the most promising stars in the American Motorcycle Association’s flat track ranks after picking up win after win as well as hard fought championships like the highly coveted 600cc AMA National Championship and AMA 600cc National Hot Shoe Championship titles.

While it looked like Shirley’s success would lead to a career in the higher levels of motocross, a race injury would sideline this plan in 1999.

“I was thrown off my bike during a race and broke several bones,” said Shirley. “These included a broken hand, which made it too difficult to grip the throttle and sidelined what I thought was my dream.”

Although it seemed Shirley might never race again, the sun shone on this born to be driver a few years later. “A few years after this accident I was dating a girl whose father was racing a stock car at our local track and I asked him if I could jump into the seat of his ride,” said Shirley.

This request would not only lead to Shirley’s first time behind the wheel of full bodied stock car, but would soon begin his new dream.

“I didn’t do well in my first dirt race, but I knew then that this is something that I wanted to pursue,” said Shirley.

Although his initial start in dirt racing began on two wheels, it quickly became obvious that this Illinois native was meant to compete on four hard charging dirt car wheels. In fact, Shirley’s first full season of competition not only lead to his first track championship, but a United Midwest Promoters (UMP) National Rookie of the Year title.

After mastering his home track, the young wheelman continued to pursue his new passion on the road with the Northern Allstars Late Model Series. In his first season, the rookie once again picked up the top honors after being named both the Rookie of the Year as well as series National Champion.

Shirley’s continued success led to his gaining the attention of legendary dirt car chassis builder CJ Rayburn and Illinois business owner Ed Petroff, who asked the talented wheel man to partner with their Rayburn/Petroff team during his 2005 season. Knowing that this team assisted in the careers of drivers like five-time World 100 Winner Billy Moyer, Shirley jumped at this new start.

The decision would prove to be a smart one as Shirley would now have the opportunity to compete in his first set of two national series, including the well-known World of Outlaws (WOO) Craftsman® Late Model Series. After visiting victory lane seven times during the 2005 season, Shirley also claimed his largest career win to date – the UMP DIRTCar Summer Nationals $10,000 Finale/Birthday Race at Oakshade (OH) Raceway. 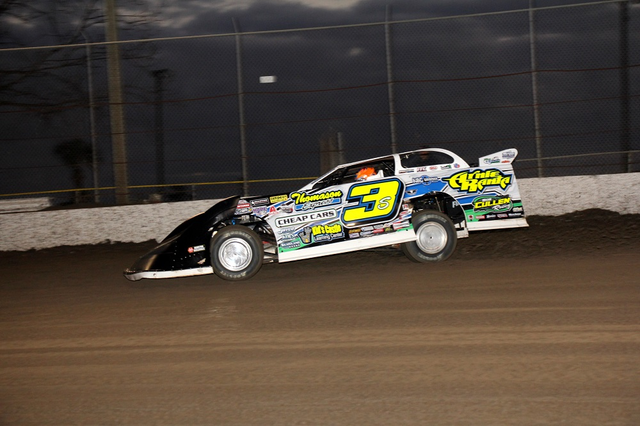 “This was an amazing race and win, which I was hoping would be the beginning of a very successful future,” said Shirley.

Unfortunately, Shirley’s follow-up season would prove to be a bit more of a challenge. In fact, the start of his 2006 season would be plagued with problems. “Ed (Petroff) got pretty sick for several months and it was preying on my mind,” said Shirley.

As Petroff’s health improved so did Shirley’s season success. In fact, Brian would pick up 12 straight wins in races like USA World 50 at Paducah (Kentucky) Speedway and the Knoxville (Iowa) Nationals.

Shirley’s 2008 season would also mean another career jump as Shirley would begin focusing on competition in the popular World of Outlaws tour. This season would also result in popular wins, including a follow-up win in the USA World 50.

As his racing career continued over the next eight years, Shirley would continue to pick up major wins, including his recent dominating first time win in the Lucas Oil MLRA Spring Nationals presented by RacingJunk.com.  Following his 5th place run in the WOO Late Model race, at a track eight hours away, the night prior Shirley would find out that the grueling overnight trip would be worth it as he dominated drivers like Bobby Pierce and Jesse Stovall to pick up a win in a race that wasn’t even on this driver’s radar when the weekend began. 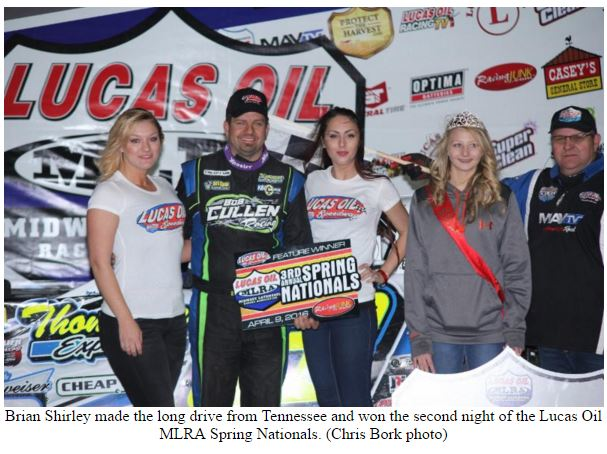 “We were actually scheduled to run another World of Outlaws Craftsman® Series race in Tennessee on Saturday, but it was rained out,” said Shirley. “Since it was cancelled in enough time to make a backup decision, I left it to my crew to decide where to race on Saturday and this is how we earned this unplanned win.”

Despite picking up both planned and unplanned dirt race wins throughout his dream career Shirley says that there is still one track that has long been his nemesis.

“I absolutely love Eldora Speedway, but still haven’t found a way to tame this beast of a track,” said Shirley.

After his recent amazing domination at Lucas Oil Speedway, we are sure that Shirley’s next big win will come at his dream track and we hope to be there to see it.

If you would like to see your favorite driver featured Behind The Wheel be sure to email us today at [email protected].

About Ellen Richardson 433 Articles
Ellen Richardson is the author of Behind The Wheel for RacingJunk.com. This automotive sports junkie has a passion for telling an athlete's story while also covering various racing activities. Find out more about her at ellennrichardson.wordpress.com or follow Ellen on Twitter at @ellennrich or Instagram at elnrich33.