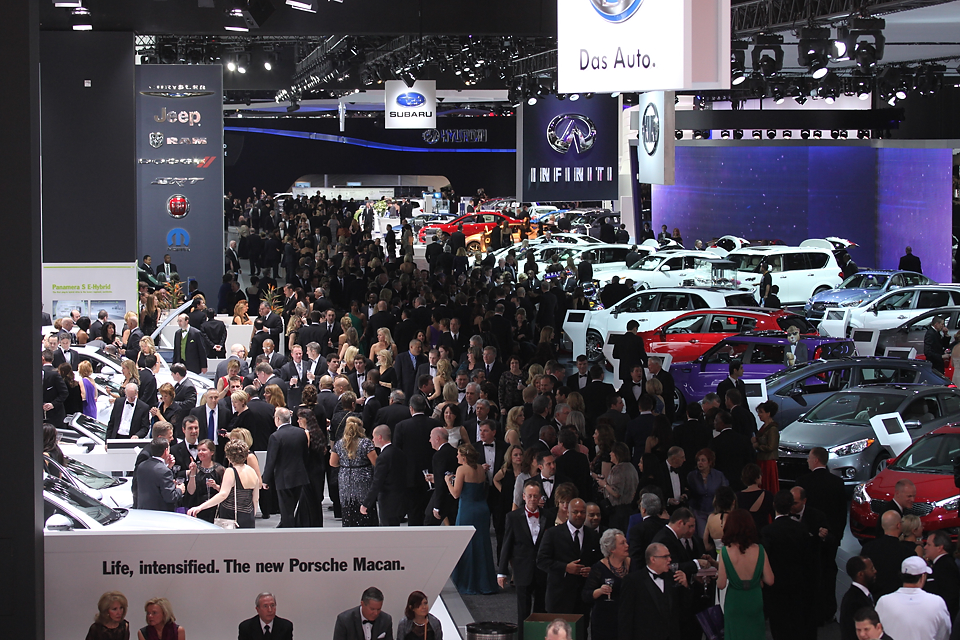 Once a year, when snow and ice cover the city of Detroit, auto manufactures bring their latest and greatest in automotive design to Cobo Hall, for the North American International Auto Show. If a manufacturer wants to get its car noticed, this is the place to bring it.

Since we’re all about American-made muscle, we thought we would show you what each of the Big Three brought to this year’s event. Ford, Mopar, and GM are doing Americans proud, as the pony wars are once again at full trot. So, whether you are looking for a new Mustang, Challenger, or Camaro, check out this run down of what was at the show.

Ford wowed the crowd when they unveiled the new Shelby GT350R Mustang on Monday, January 12. This is the most track-ready road-going production Mustang ever built. In 1965, Ford and Carroll Shelby collaborated, and built a road-racing version of the Mustang – the Shelby GT350 Competition model. It was lighter and more powerful, with a highly developed suspension, Even today, it is one of the most iconic racing Mustangs ever.

According to Ford, the new Shelby GT350R has been designed and engineered in the same spirit—this is a streetable race car

According to Raj Nair, Ford group Vice President, Global Product Development. “The Shelby GT350R Mustang is a no-compromise car in the pursuit of maximum track capability. It is a thoroughbred street car, making use of technology and ingenuity to deliver performance few enthusiasts have ever experienced.”

If a part did not make the car faster around a road course, it was considered for removal.

Items removed include: air conditioning, the stereo system, rear seats, trunk floorboard and carpet, backup camera and emergency tire sealer and inflator. Exhaust resonators also have been removed for weight savings with the benefit of creating a sharper exhaust tone. The Shelby GT350R is more than 130 pounds lighter than the Shelby GT350 Track Pack model.

The new Camaro Z/28 is—according to GM, their most track-capable model in the model’s history. They have built on the legacy of the original SCCA Trans Am-series contender that was introduced in 1967. This time however, the new Z/28 isn’t intended to compete in a specific race series, but it is solely focused on track capability. In fact, driver’s can look forward to 1.08-G in cornering acceleration, and faster lap times.

The Z/28 logged a 7:37.47 lap time on Germany’s Nürburgring road course. That is four seconds faster than the ZL1 Camaro, and faster than published times for the Porsche 911 Carrera S and the Lamborghini Murcielago LP640. The Z/28 weighs 300 pounds less than the supercharged ZL1 Camaro, with changes ranging from lightweight wheels to thinner rear-window glass. In fact, 100 percent of the un-sprung mass (suspension, wheels, tires and brake system) has been changed from the Camaro SS, dramatically enhancing the balance and overall driving feel of the Z/28.

“The Camaro Z/28 is an uncompromising performer that’s bred for the track – and every one of its unique components supports the goal of faster lap times,” said Mark Reuss, Executive Vice-President, Global Product Development. “It takes the Z/28 back to its racing roots, and adds to the strong lineup of Chevrolet performance cars”.

Aerodynamic components include a rear spoiler with a wickerbill. This is a small, adjustable vertical tab at the edge of the spoiler. This allows the Z/28 to handle turns at higher speeds, and delivers greater overall high-speed stability. The car has a unique front fascia that features an airflow-optimized grille for enhanced cooling, and a modified fascia bottom that incorporates provisions for the brake cooling ducts. There is also a front splitter that enhances cornering and high-speed stability. Finally, a functional carbon fiber hood extractor provides increased engine cooling by allowing hot air an exit route. The design is similar to the extractor featured on the ZL1 Camaro.

Power conveyed through the transmission is distributed to the rear wheels via a high-performance, zero-preload limited-slip differential that enables the driver to apply more power and get through corners faster, by continuously adjusting the torque bias to maximize available traction. It features a concentric helical gear set that generates friction proportional to the input torque and allows continuous torque biasing and differentiation to be managed between the drive wheels (conventional limited-slip differentials use preloaded clutch plates and springs to create a fixed amount of friction that is always present). The axle ratio is 3.91.

Performance Traction Management (PTM) is an advanced system that integrates the chassis mode selection, Traction Control and Active Handling Systems, which are tuned specifically in the Z/28 for optimal road-course performance and consistency. PTM enables the driver to press the accelerator pedal to wide open at the exit of the corner and manages acceleration based on the given vehicle dynamics.

One of the sophisticated features integrated with PTM that help the Camaro Z/28 deliver faster laps on an undulating race track is dubbed the “flying car” logic by engineers. It is a feature for track use only that helps maintain the car’s full power and momentum, even if the tires briefly lose their contact with terra firma in certain track conditions. Without it, PTM would interpret the force reduction on the tires as a loss of traction and trigger torque reduction in an attempt to restore it – an intervention that would likely slow the car and reduce momentum.

PTM offers five performance modes, to accommodate a variety of driving conditions. The track-oriented “flying car” logic is available in all PTM modes, but it is most effective in Mode 5, which is calibrated for the fastest lap times.

Inside, the Z/28 features a flat-bottom steering wheel and Recaro seats with microfiber inserts. The seats feature aggressive bolsters for high-performance driving, as well as seat cutouts inspired by the five-point harnesses found on racing seats. To save weight, both front seats incorporate manual adjustment. The rear seats of the Z/28 have also been modified for weight reduction. Nine pounds were saved by eliminating the seat-back pass-through, as well as using high-density foam in place of the rigid structure of the seat back and steel mesh of the seat bottom.

Additional examples of weight savings include: Elimination of the tire-inflator kit, except for Rhode Island and Maryland, where it is required by law, removal of some interior sound deadener, as well as trunk carpet, use of a smaller, lighter battery, thinner rear-window glass, elimination of high-intensity discharge, or HID, headlamps and fog lights, and no air conditioning—except as part of the single option package.

Although simply a concept at this time, we had to show you the Dodge Challenger T/A Concept. This Sublime Green example is a big gun in the Dodge brand’s muscle-car arsenal, and shows that they haven’t forgotten their roots.

This modern interpretation of the legendary T/A package available in the 1970s for the Challenger, the Dodge Challenger T/A Concept draws on heritage-inspired cues, but also calls on present-day performance modifications and new prototype products designed with an eye toward the future.

The Sublime Green paint is underscored by full-length matte black T/A graphics, flanking each side of the body, in keeping with the spirit of the original T/A. The matte black look carries over from the aggressive front fascia all the way to the rear deck-lid spoiler to provide an iconic, sinister appearance. The functional “Viper”-inspired center scoop hood with Mopar gloss black hood pins has been adapted to accommodate a Mopar induction system. Cool outside air streams into the air box of the 6.4-liter legendary 392 HEMI® engine via the functional hood scoop.

Not a lot of highlights and details were available, but we can’t wait until this one hits the market—do you think it will? We hope so.

It’s 2015, and technology is running rampant. The horsepower wars not only mean virtually unlimited power, that power is delivered along with cruise control, air conditioning, and sound system that you can actually hear. Sorry 1970, but that is tough to beat. Since each of the Big Three is bringing a lot of horses to the new Pony Wars, what does that mean to you? That depends on what you are looking for. We’re sure that each of you has read the “first crash” articles about each of the Big Three’s most powerful muscle cars in the hands of uninitiated drivers. Too many times, big egos and a lack of driving ability leads to the demise of countless cars. If you’re reading this, and are not sure how your new car will react, please, leave the Traction Control on! So, what this growth-spurt of power means that this time, the muscle car wars are even better than the original was, some-odd 40 – 50 years ago.

Finally, there are some people out there that complain that each of these 21st-centruy muscle cars is too big and heavy, and maybe that’s true. Maybe that’s why the manufacturers are removing weight. But, one thing is for sure, with a 500-horsepower engine being “the norm”, there is no better time to be a car enthusiast than right now.