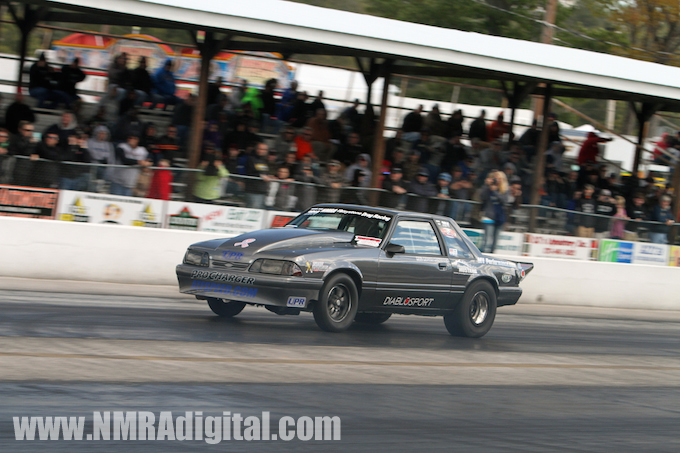 As soon as “Bad” Bart Tobener broke the beams for his first qualifying pass on October 2nd at the NMRA World Finals, he clinched the 2014 Edelbrock Renegade class championship. After an incredible year that had him breaking down the 7-second barrier on his way to three victories, Tobener could take it easy for the rest of the weekend. Thanks to his dominant performances throughout 2014, Tobener had locked up the championship before he passed the 60 foot mark of the track. Unfortunately for his competitors, there was no “taking it easy” on them. Tobener had his eyes on a fourth victory.

After qualifying #1 overall with an 8.101 @ 168.37 mph timeslip, Tobener made his way through eliminations on his way to meeting Adam Arndt in the finals. Arndt took any suspense out of the situation by red-lighting. Tobener gave fans one more show, running 8.022 @ 170.28 mph to further solidify his championship claim.

More and more Blue Oval racers are finding favor with Holley EFI and Tobener has had nothing but praise for it since he made the switch, stating, “I really like the versatility of Holley’s Dominator EFI. From changing inputs and outputs, to the self-tuning, it is by far the best system I have ever used. From the very first race I ran with the Dominator, I felt very comfortable with the software and it has enabled me to concentrate more on the other aspects of my racing program.” With Coyote and Mod Motor harnesses hitting the shelves soon, running a Holley EFI system on your Mustang is only going to get easier according to Holley. Holley currently offers universal harnesses to get the job done on nearly any vehicle you can imagine, including ones like Tobener’s 5.4L Procharged mod motor Fox-body Mustang. See how Holley can help your car reach its potential at www.holley.com.