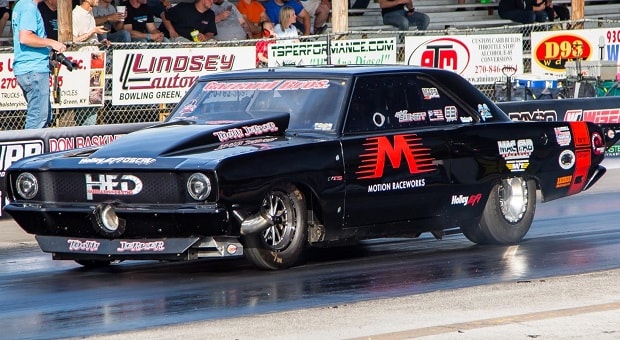 “When I got back in the car in October 2016, the quickest it had ever gone was a 4.41,” said the 27-year-old Limited Drag Radial star from Robbins, N.C. “Early last year, we ran a 4.31 at Darlington to unofficially break the record, then a 4.27 at Bradenton to make it official. At Lights Out 8 at South Georgia we ran a 4.24 and won the race, then made the first run in the ‘teens,’ a 4.19, in qualifying at Memphis and ran a 4.18 in eliminations – that was the record until we got to Bowling Green.”

Those record-breaking runs are powered by a Pete Harrell-built 547 cubic-inch big-block Chrysler with a complete Holley Dominator EFI system and a set of Holley Smart Coils. “Once you get that Holley EFI set, it’s just dead-on,” Barnett said. “You don’t have to mess with it any more. From the time we started running it, we’ve had no problems with it, and I mean zero.”

At OSCR at Beech Bend, Barnett and company had to recover from a major explosion in pre-event testing. The car broke the tires loose off the line, over-revved and sent over 50 pounds of boost through the intake. Holley technicians helped out with the machine work, and astonishingly, .051-inch piano wire from a local piano repair shop was used for O-ring material to seal the combustion chambers on one side on the barrier-breaking run.

“The guys from Holley really stepped up to help,” Barnett said. “I mean, it was all hands on deck. Who would have ever thought that piano wire would actually work? We kept throwing power at it, and it just kept running faster every time – 4.20, 4.17, and then the 4.13 in the first round of eliminations, all right in a row, back to back to back. In the second round, we lost the cam signal and the motor shut itself off and put us out of the race. If that hadn’t happened, we would have won the round and maybe the race. A Holley crank trigger and Holley Hall Effect cam sync will be on there the next time this car goes out, and we won’t have that problem again. We’re really just getting started, as far as I’m concerned. We’re nowhere near how fast this car is eventually going to run.”