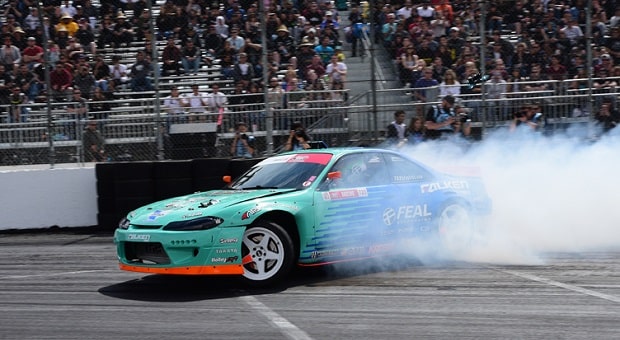 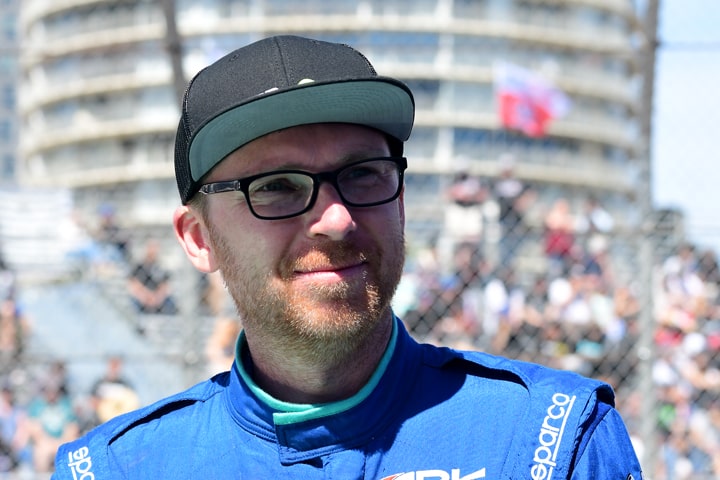 This year’s two-day meeting didn’t have some of the drama experienced last year. Federico Sceriffo, whose Ferrari 599GTB produced a highlight reel when it went up in flames during last year’s competition, fell to Bakchis in the first round of 32. The only reel-worthy incident came during Saturday morning practice, when Ryan Tuerck crashed heavily and was unable to compete in his Toyota 86. He would be okay, the car not so much…

One of the big surprises in qualifying was Matt Field’s No. 1 position in his Chevrolet Corvette. Always a viable competitor, Field went as far as the Great 8 before falling to eventual third-placed Chris Forsberg, the series’ three-time champion (Nissan 370Z).

Reigning two-time champion James Deane, the lanky Irishman driving a Nissan S14, went as far as Round of 16 before meeting fellow Irish driver Dean Kearney’s Dodge Viper, the oldest machine in the paddock. There would be mechanical issues and “one more time” judging before Kearney unseated the champ, only to fall to last year’s Long Beach winner Fredric Aasbo (Toyota Corolla hatchback) in the subsequent.

Some would say Bakchis had an easy draw with his battles against Sceriffo, Mike Essa’s BMW and Justin “JTP” Pawlak’s Mustang before he unseated first Forsberg and then Wang. But Formula DRIFT is competition that needs more than aggression behind the wheel; a certain amount of smoothness, even as the car appears to be out of control, is necessary. Bakchis has shown, since arriving on the drifting scene in 2011, that he has all the qualities to be a winner. 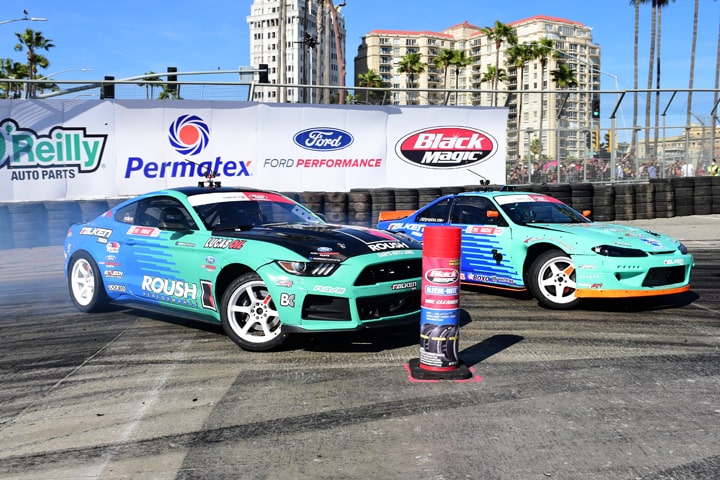 Last year’s Pro2 champion Travis Reeder showed he belongs in the big leagues when he raced his backup Nissan S14 hard against Alex Heilbrunn (BMW) and Piotr Wiecek (S14 Nissan), falling to the latter driver (teammate to James Deane) in the Sweet 16. Reeder and his Napoleon Motorsports team are hoping to race their crowd-pleasing Chevrolet Camaro EL-1 in the next round at Orlando. It wasn’t allowed to race in Long Beach despite passing tech; the Long Beach Fire Department said it wasn’t properly prepared for a single electric competitor (despite hosting Formula E twice). 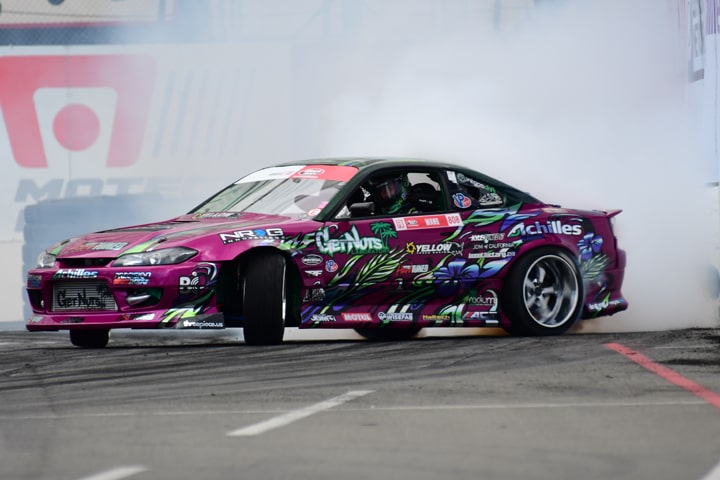 The final four competitors – Forsberg and Bakchis from one side of the ladder against Aasbo and Wang – looked to be a proper competition, but Aasbo’s engine expired in the first pass, allowing the popular Wang, who returned to competition in 2018 after some time off, to produce a single run of the course en route to the final battle. The competition between Forsberg and Bakchis was fierce, with the Feal Suspension owner emerging as winner. 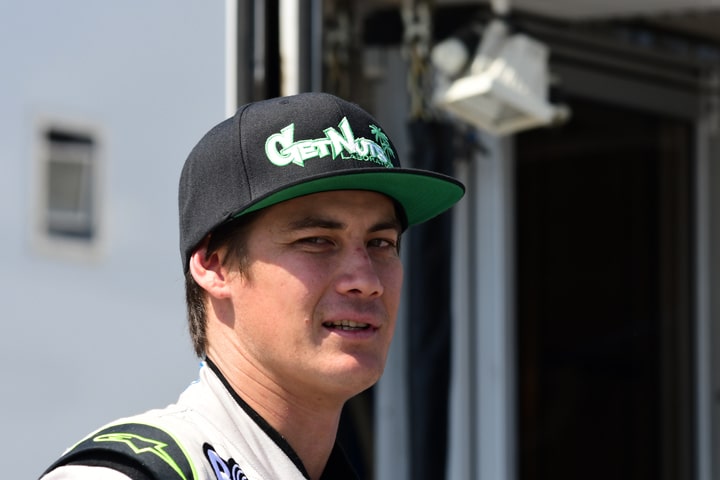 In the final bout, Formula DRIFT’s three judges needed extra time to tabulate their findings, eventually finding Bakchis’ leading and following passes were superior to Wang’s and leaving the Hawaiian a runner-up once again. Pandemonium and cheers broke out as the scores were announced and the crowd applauded wildly at the results. Bakchis was overcome as he raised his arms in victory. 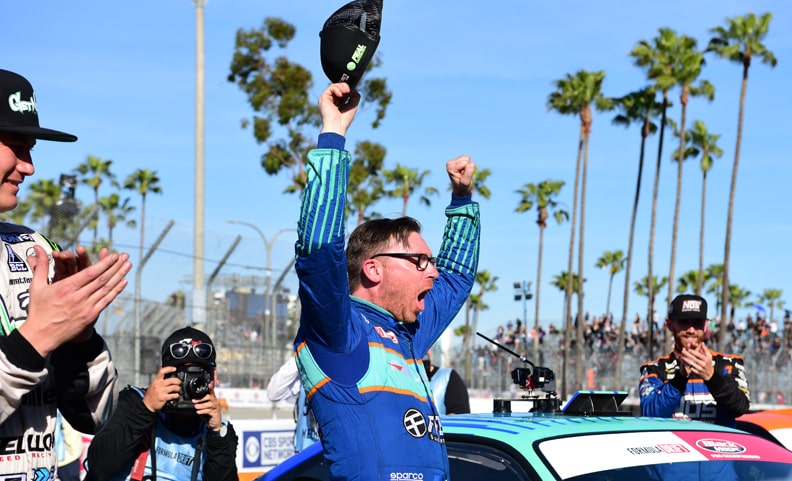 Formula DRIFT will be on the streets of Long Beach once again next weekend for their two-night invitational event during this year’s 45th annual Acura Grand Prix of Long Beach. The night-time extravaganza is an always exciting event and is free for attendees of the Grand Prix race. 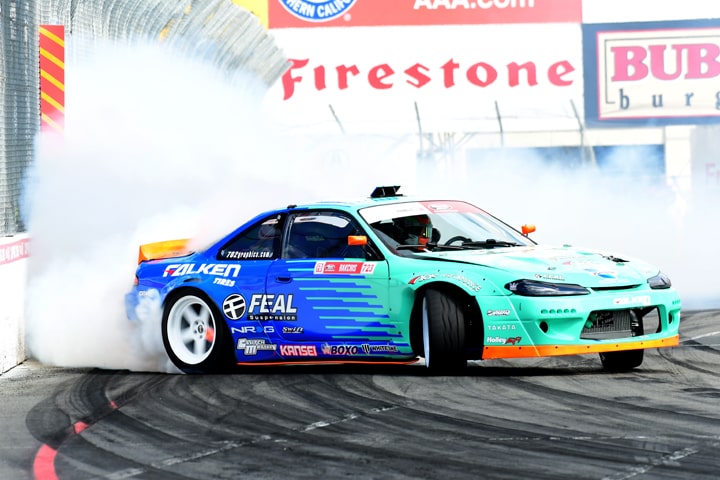