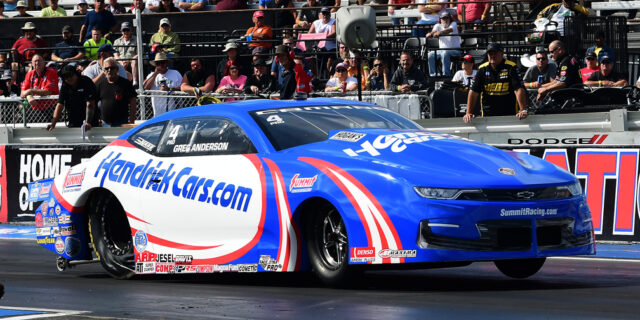 Greg Anderson is one fierce competitor. NHRA Pro Stock racing in the Camping World Drag Racing Series is what makes his blood run steadily through his veins and what he eats, sleeps and drinks. It’s his calling.

Not only does Anderson own four championships in this class, but he’s on the verge of becoming the door slammer class’ most successful driver. On Sunday, September 12th, Anderson wheeled his KB Racing HendrickCars.com Chevrolet Camaro to victory over fellow four-time titleholder Erica Enders, tying The Professor, Warren Johnson, with 97 victories in the Pro Stock category.

Anderson, 60, has been on the verge of this achievement, but it took the Mopar Express Lane NHRA Nationals, held at historic Maple Grove Raceway outside Reading PA to fulfill this destiny. It’s been a haul for Anderson, who last won at the final Atlanta Dragway event, the Lucas Oil NHRA Southern Nationals, held at the end of April, start of May. For a guy with 96 victories on his resume, that’s a long wait. 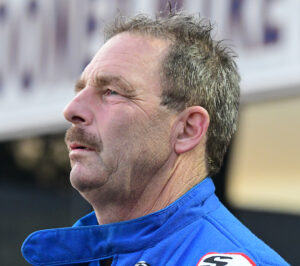 “There’s nothing better than when that win light comes on. It was a huge day to finally tie Warren – I learned so much from him and it’s kind of a cool story. Now I get a chance to try and beat him, and we’re going to Charlotte with a chance to break that record,” he said after exiting his car at the top end of of the track.

Before knocking out Enders in the finals with a quarter-mile pass of 6.578 at 208.30 mph over her  6.604/206.73, Anderson easily defeated John Gaydosh Jr., who broke on the burnout, survived a tight contest against Matt Hartford, and earned a hole shot victory over Troy Coughlin Jr. He retains the points lead over Enders, before going to North Carolina for his “home” race in the Carolina NHRA Nationals at zMax Dragway.

“It feels pretty cool to make some history today,” Anderson continued. “After the Atlanta race, we were on a roll and I kind of dropped the ball and couldn’t find a way to the winner’s circle. Thank you to everyone who has been part of every one of these wins,, from family and fans to our incredible KB Racing team – and every sponsor who has stood by us through the years. Today is for all of us, not just the driver.”

About Anne Proffit 729 Articles
Anne Proffit traces her love of racing - in particular drag racing - to her childhood days in Philadelphia, where Atco Dragway, Englishtown and Maple Grove Raceway were destinations just made for her. As a diversion, she was the first editor of IMSA’s Arrow newsletter, and now writes about and photographs sports cars, Indy cars, Formula 1, MotoGP, NASCAR, Formula Drift, Red Bull Global Rallycross - in addition to her first love of NHRA drag racing. A specialty is a particular admiration for the people that build and tune drag racing engines.