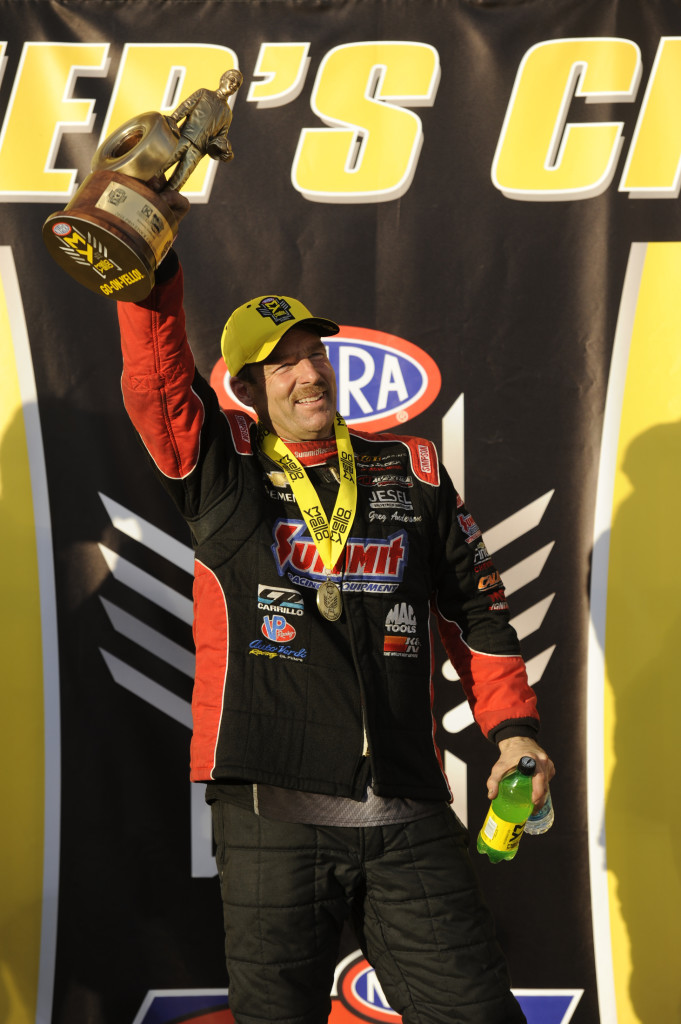 Greg Anderson walked away from the Circle K Winternationals with a big smile on his face after a winter of wondering if his Summit Racing KB Racing Pro Stock Chevrolet Camaro would be up to par with the rest of the field for the NHRA season opener at Pomona.

The answer that Greg received was a resounding ‘yes’ not only in winning the race, but also in the good graces of having his teammate, Jason Line, joining him in the first finals of the new Electronic Fuel Injection (EFI) era.

Never before has the landscape of drag racing seen such an obvious and dramatic change as with the 2016 NHRA Pro Stock car. The noticeable differences are the removal of the hood scoop and shorter wheelie bars putting the drive back in the car. It’s the secret that’s under the hood that seems to be causing a majority of the problems for Pro Stock crew chiefs, but from initial appearances, it looks like KB Racing is heading in the right direction.

“Definitely, a win’s a win, no matter how you look at it,” said a smiling Anderson. “Every year when you go to Pomona for the first race of the year, you’re scared to death, where are you going to stack up, and what kind of winter did everyone have development-wise. This year you can multiply that by ten-fold. The anxiety and the worry going into Pomona of what you’re going to look like with all these rule changes.

“We had no earthly idea and things just turned out great. We certainly don’t feel like we ‘skinned the cat’ or have the EFI deal figured out, but we did slightly better than the rest. On the other hand, as Jason (KB teammate, Line) said, we were the least worst. We just didn’t stink as bad as the rest of them.” 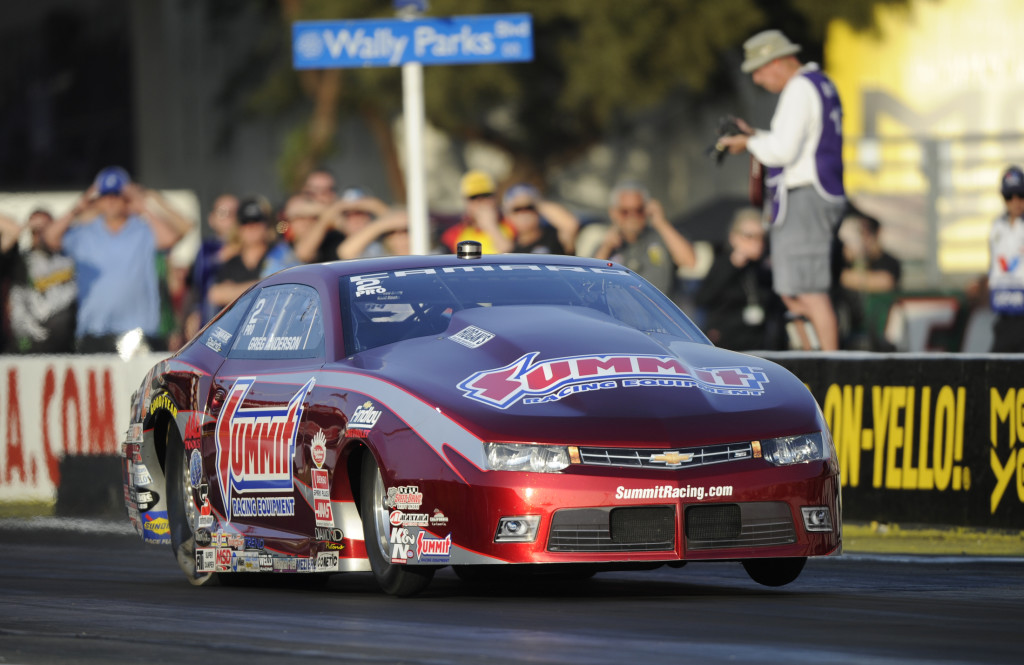 From the start to the finish at Pomona, KB Racing steered the wheel showing they were the cream of the crop of the division. First, it was Bo Butner taking his KB Racing Chevy to the top spot in qualifying with Anderson taking over with his Low ET qualifying pass of 6.586 seconds in the third qualifying session. With their gains being met, the team was able to hold onto the No. 1, 2, and 3 starting positions. Anderson kept waiting for the field to catch up all weekend and when it didn’t, he stopped looking over his shoulder so much and went into race mode, winning his 79th career Pro Stock victory.

“You know you kept waiting for the ball to drop,” said Anderson. “You kept waiting on somebody else to lay down a number and it just never happened. Then on Sunday, it appeared the pack fell back a little more. It was kind of a shock all weekend long and I’m not quite sure was it just the quality of runs that everyone was making were just off or were they off with the setup or tune up with the EFI or what. As the weekend progressed, we seem to open the gap a little bit. We started with a little gap on Friday and as the weekend progressed we thought it would go the other way.”

It was through KB Racing’s preparation and discovery during testing at the Wild Horse Pass Motorsports Park in nearby Phoenix in early February leading up to Pomona that pointed them towards a good course of action. At first, they were plagued with the same beginning startup issues just like everyone else. The crew led by Rob Downing got their head back in the game and it was time to get race ready and overcome all obstacles through trials and tribulations. 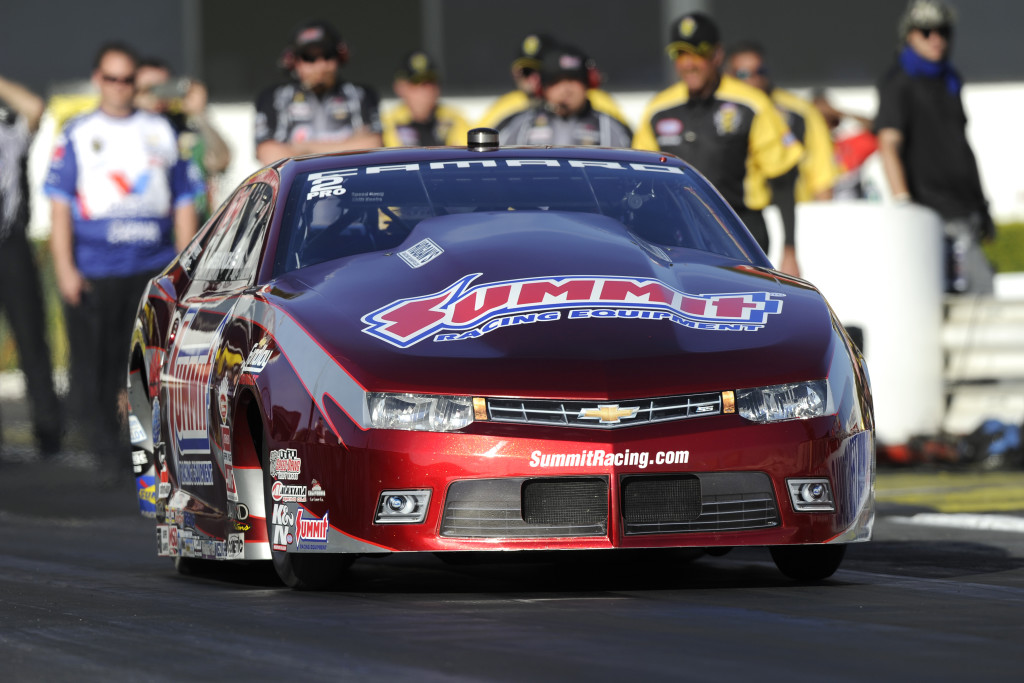 “There were no other major issues over the weekend,” continued Anderson. “When we got to Phoenix a few days before Pomona, we struggled some with the drivability of the cars and couldn’t  get them to idle smoothly. You couldn’t get the car to stage smoothly, so we were a little bit scared going into Pomona. It really doesn’t matter whether it runs down the racetrack if you can get it staged properly or get it to do a proper burnout, it’s not going to make a damn bit of difference. We made some gains on that.

“By the time we finally got done with Phoenix and got to Pomona, the idle was smooth and we were able to do some nice clean burnouts with all three cars and stage them properly. That’s probably been, to be honest with you, the biggest sticking point; the one thing that lags behind in the development is getting that drivability right with the car. We’re pretty good with it right now. We’re not perfect. At least we can make a good burnout, we can stage the car properly, and then let the horsepower talk.”

The throttle being the key to the entire racing process that starts everything in motion has caused a big hubbub among teams in getting ‘throttle feel’ back to the car to give drivers their own sense on how to react on yellow and what the car will do at the hit of the pedal. Anderson gave a great description what all the Pro Stock teams seem to be encountering when trying to harness the power with just enough push on the gas.

“What you have now and what you didn’t have before, you could pretty much put that throttle in any position you wanted and the RPM of the motor would go up whatever you told the throttle to go up,” said Anderson. “With this type of deal now you have one great big butterfly to let all the air in instead of eight little butterflies like you had with two big four-barrel carburetors. With the engine running, they run so efficient; they build up a bunch of manifold vacuum.

“You’ve got a vacuum against the back of that big ole blade. So, as you’re trying to open that big blade to let the air in, there’s that vacuum pulling against you and you can’t break it open. You’ve got to push, got to push, got to push and then finally when it snaps open, then the vacuum disappears and it wants to go wide open. It’s hard to give it a little bit of throttle. Either it’s none or it’s everything. That’s been a difficult thing to get that transition smooth from no throttle to a little throttle because of that manifold vacuum against that one big blade.”

Now with the NHRA CARQUEST Auto Parts Nationals coming up this weekend, Anderson and company have been running the dyno non-stop trying to build more horsepower, but at the same time keeping within the 10,500-rpm limit rule. No way are they letting their guard down and are still searching to get their own rides better. It’s a nonstop process and the research continues this weekend in the Valley of the Sun. 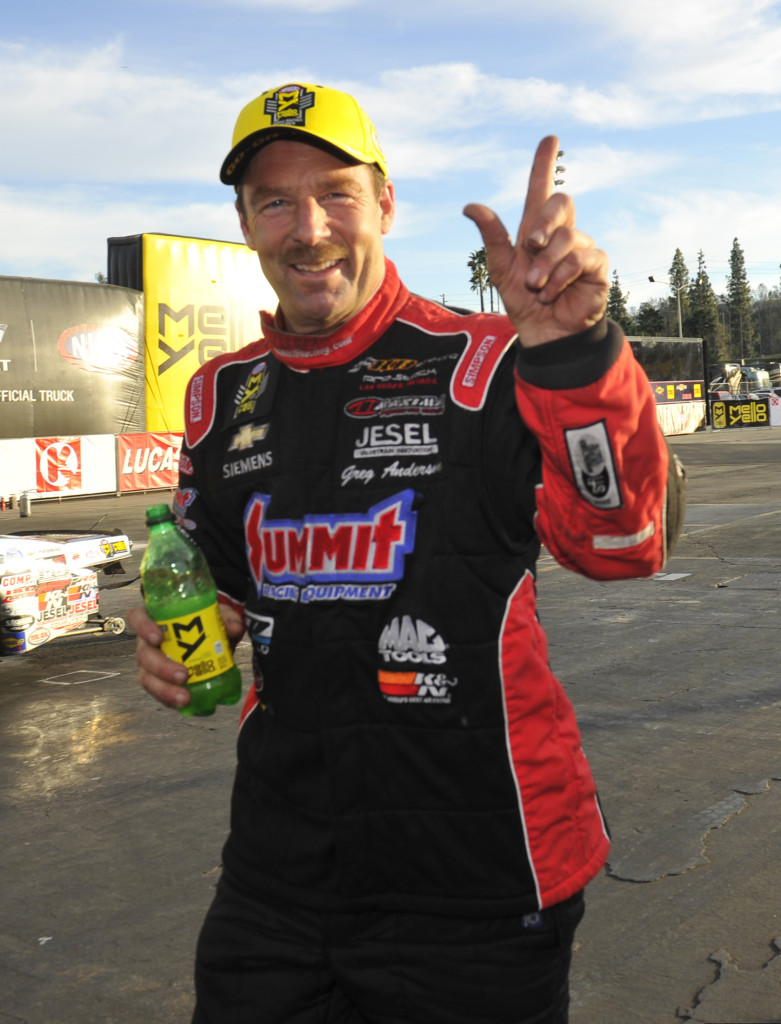 “I have no grand illusion that we’re going to have the gap that we had at Pomona,” Anderson said sincerely. “I know for a fact, if we sit on our butt for the next 10-days and don’t try to do anything to make it better, they’ll catch us just by the time we get to Phoenix, and so, we’re going to have to make our product better than what we had at Pomona. We’re already digging on the dyno trying to find more power.

“It was enjoyable to have that gap and it was fun to race like that. It’s been a lot of years since I have had a race where we had an advantage on the competition. It was so much darn fun that you hate to give it up. We’re going to dig as hard as we can to maintain that advantage. We definitely know if we don’t do anything we’ll lose that advantage, so we’ve got to make some gains and that’s exactly what we’re trying to do.”

Qualifying starts on Friday for the CARQUEST Auto Parts Nationals at the Wild Horse Pass Motorsports Park in Chandler, AZ at 1:30 and 4 p.m. MST.