Are you lucky enough to race in a location where the weather is agreeable year round? You get to race in January as much as July but your vehicle’s performance will fluctuate depending on the season and atmospheric conditions. Below are considerations to ensure best performance out of your land or water racer.

As weather changes with the seasons, fluctuations in temperature, humidity, and barometric pressure affect how much oxygen is in the volume of air. When the throttle is opened, the same volume of air goes into the engine. Engine tune-ups need to be tweaked to maintain the right amount of fuel for the amount of oxygen in that volume.

Aside from the general effects of seasonal changes on an engine tune-up, other factors can be influenced.

Traction at our local drag strip just about goes away when surface temperature goes below 70 deg F. Surface treatment is tolerant to a certain amount of humidity, but if significant amounts of dew form, it is too slick to hook up.

Dirt tracks are usually wetted down on dry days. The amount of clay will determine how much water is retained and how often the surface has to be serviced. The higher the temperature, the faster the dirt surface dries out. Dirt track locations with high humidity days may be better for the dirt than those with low humidity days. When the right amount of water spray and humidity in the air is established on some dirt surfaces, the surfaces are so hard that the tires can black track the surface as if it is pavement. Dirt track surfaces that are not sprayed with water to keep them damp combined with low humidity can form a lot of dust. That reduces traction. An example is desert racing where the racecars leave a rooster tail of dust and slide all over the place in turns after a lot of racing traffic.

On the other hand, increased humidity decreases the density of air. As a result, aerodynamic drag may be reduced by higher humidity. Humidity weighs less than dry air. High humidity air weighs less than low humidity air for the same barometric pressure and temperature. Drag racecars that run nose high such as high HP, fully suspended grudge racecars may be less likely to get airborne in humid weather during some of these drag racing runs that are made “on the rear wheels!”

If the racer has a forward facing engine air inlet, a head or tail wind affects ram air induction. The amount of oxygen in the air/fuel ratio will fluctuate as air is blown into or away from a forward facing air scoop. Vehicles that are less aerodynamic will be slowed more from a head wind. A side wind will affect any slab side on a racer such as a vertical side panel or large spill plates. Many racetracks around the world restrict racing when high side winds appear.

Oxygen in the atmosphere is the most important item to affect power. Racers can manage this by tracking air density changes. Seasonally, note that:

For carbureted engines, jetting or air bleed adjustments may be needed to chase the rise or fall in air density. If an engine is over-carbureted (too large), performance fluctuates more with air density changes. The carb seems fine in high air density and can be problematic, such as bogging, in low air density.

Other parts of the vehicle will experience changes. Hoses will be less flexible during cooler weather and are more likely to kink or crack.  Either can affect fuel flow. Rubber expands during warmer weather that may affect fuel flow. For alcohol or nitro fueled racers, starting is more difficult in cool weather. A squirt container with low octane gasoline for priming may be more vital.

Tire traction throughout the year

Tire traction will change throughout the year. For drag racing, a track temperature of about 70 deg F (21 deg C) or higher is best for traction. Lower than that is usually a significant reduction in traction. Higher powered racers may not be able to hook up when the track temperature gets cool.

One West Coast Winter afternoon when our local drag strip surface temperature was a cool 60 deg F (16 deg C), we ran our funny-car setup at about 2,000 horsepower. We spun the rear tires at will throughout the entire runs. In high gear, we black tracked the tires through the finish line, powered sideways on a fun run. If we were in competition, it would have been a loss to any car with less power that could hook up. But we were having fun.

In the other direction, track temperatures over 130 deg F (54 deg C) may be problematic where racing surface treatments are used. The track sprays often become gummy on a hot track surface however spraying the track with water and letting it evaporate is a trick used by some facilities. That will cool down the surface of the track on hot days.  Racers in the staging lanes, unaware of what is going on, often cringe when they see that; then only to be delighted when their racecar hooks up better during a subsequent run.

In circle racing, excess track temperatures may lead to chunking of rubber from the tires at elevated surface temperatures during hot weather.  Harder rubber compounds may be needed. In some cases, higher tire pressure can reduce contact area on the hot track, reducing temperatures in the tire.

Alcohol and nitro engines most often do not run a cooling system. They use fuel enrichment for cooling of the engine.  However, we noticed that adjustment of idle fuel was needed in our alcohol drag car depending on the air temperature. That was to maintain engine temperature to a more consistent value for consistent staging for the race.

Tucson is located in the desert landscape of Arizona. Temperatures in the summer are very hot and very dry. However, in the desert, monsoon season is over the summer months. There are occasional outbursts of strong rain and heavy humidity that drop the temperature several degrees. In the desert, that could mean going from 115 deg F down to 95 deg F. These bursts of moisture from the outbursts quickly subside, and dry heat returns. Air density affects on a racer immediately after an outburst would be different than some time later.

Spring and fall are mild and dry. Temperatures are very pleasant, but high winds may come up. Winter can be fairly cool with high temperatures ranging from the 40’s (4 deg C) to the 60’s (16 deg C) dry conditions. 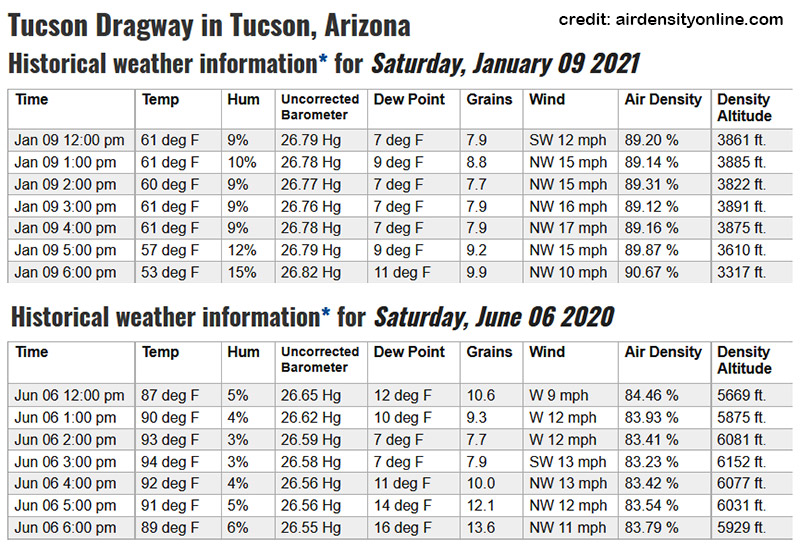 The graphic above illustrates temperature differences between a summer and winter day in Tucson. On Saturday, January 9, 2021 the air density was at 93% in the early morning. In the warmer afternoon, the air density dropped to 89%. Weather on this day was clear with sun exposure on the track. Sun exposure can increase track temperatures by about 5 to 10 deg F (from 2 to 5 deg C) which would help to improve traction on a cooler day.

Conversely, Tucson dragway on a very hot Saturday in June experienced air density ranging from 85% in the morning down to 83% in the warmer afternoon. While there wasn’t much of an air density change over the course of the day, there was a 7% overall decrease compared to the same track in a subsequent winter day. 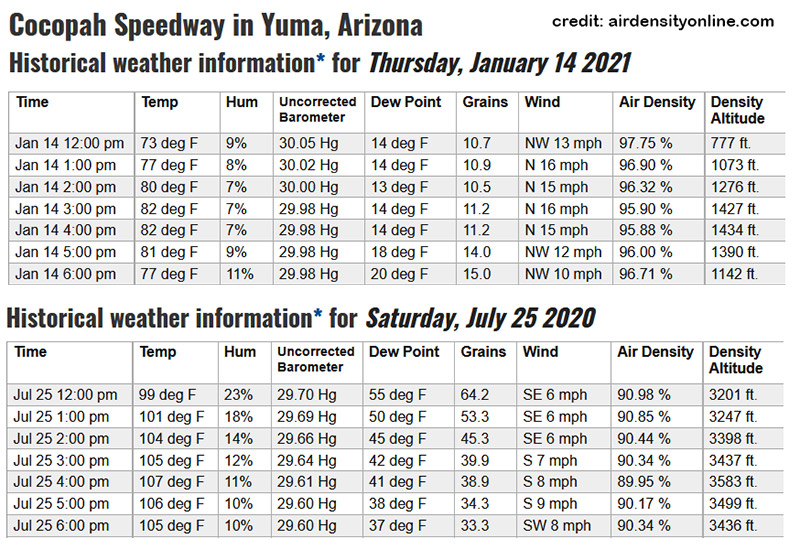 Cocopah Speedway runs events year round. As seen in the graphic above, afternoon air density values were around 96% on January 14, 2021. Evening air density values on the same day got up to 100%. Tuning changes would be unlikely for carburetor-equipped engines if they run fuel-rich in the afternoon. Mechanical fuel injection engines would need adjustment.

By comparison, summer racing at Cocopah Speedway has very different conditions. On July 25, 2020, air density was around 90% in the afternoon and up to 92% in the evening.  The temperature dropped from 106 deg F (41 deg C) down to 90 deg F (32 deg C) in the late evening. Engines in the summer are gasping for power compared to runs in the winter months with an average air density difference between the two seasons of 7%. In the winter months, engine response coming out of the turns would be greater as well as greater horsepower gains. 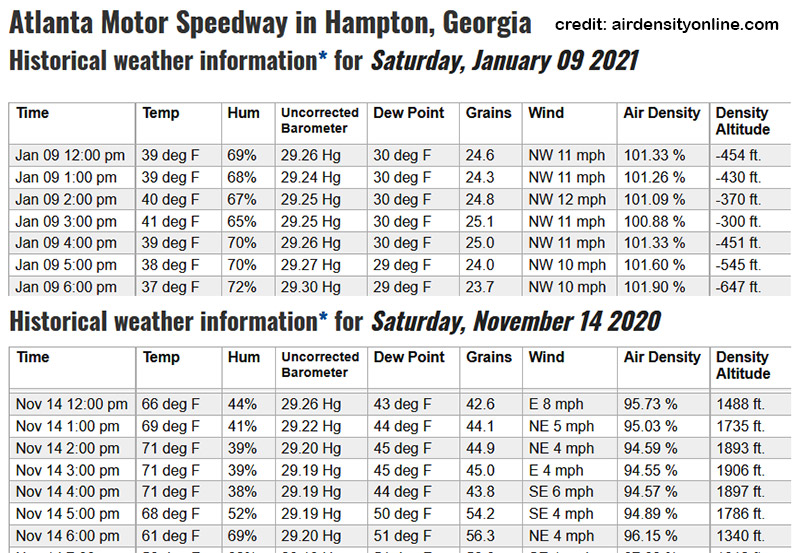 Air density analysis in the winter

Air density at Atlanta Speedway on January 9, 2021 ranged from 102% down to 101% throughout the day with cool and cloudy conditions. Yet a little more than a month earlier on November 14, 2020, warmer weather occurred with very reasonable racing conditions. Air density values ranged from 100% for a winter day down to 95% for a summer day. Hourly data for both days show a change in air density within each day as well. 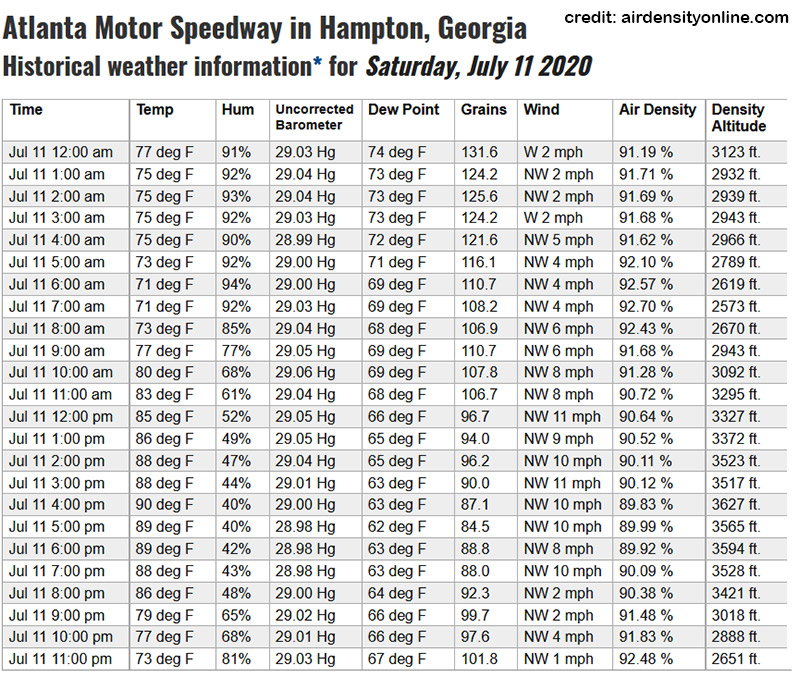 Air density analysis in the summer

Atlanta Motor Speedway in the summer has noticeably different air density values.  On July 11, 2020, air density ranged from a morning high of 92% down to an afternoon low of 90%. While that is not much of a change throughout the day, it was a 10% average change from data examined from earlier in the year. That necessitates engine tuning and chassis and tire traction adjustment.

As seasons change, the performance of your land or water racer may fluctuate. Taking the air density changes into consideration and tuning for that ensures reliable maximum performance year round. In summary: