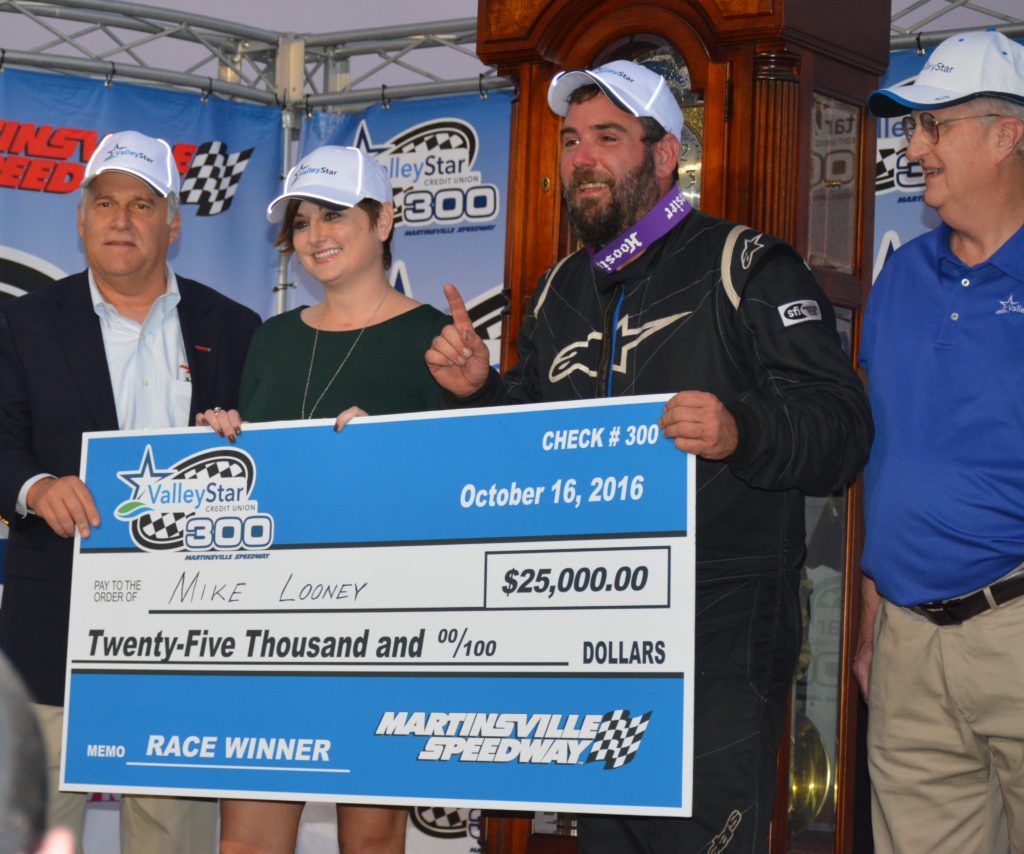 While many late model race teams across the South run on shoestring budgets, few in the birthplace of NASCAR are able to pull off the kind of win that New Castle, Va. native Mike Looney did on Sunday at Martinsville Speedway.

Looney’s underfunded, never-say-quit team began their dream weekend on Saturday evening after winning the pole for the historic ValleyStar Credit Union 300 with a qualifying time of 20.323, just a few seconds ahead of past winner Lee Pulliam. 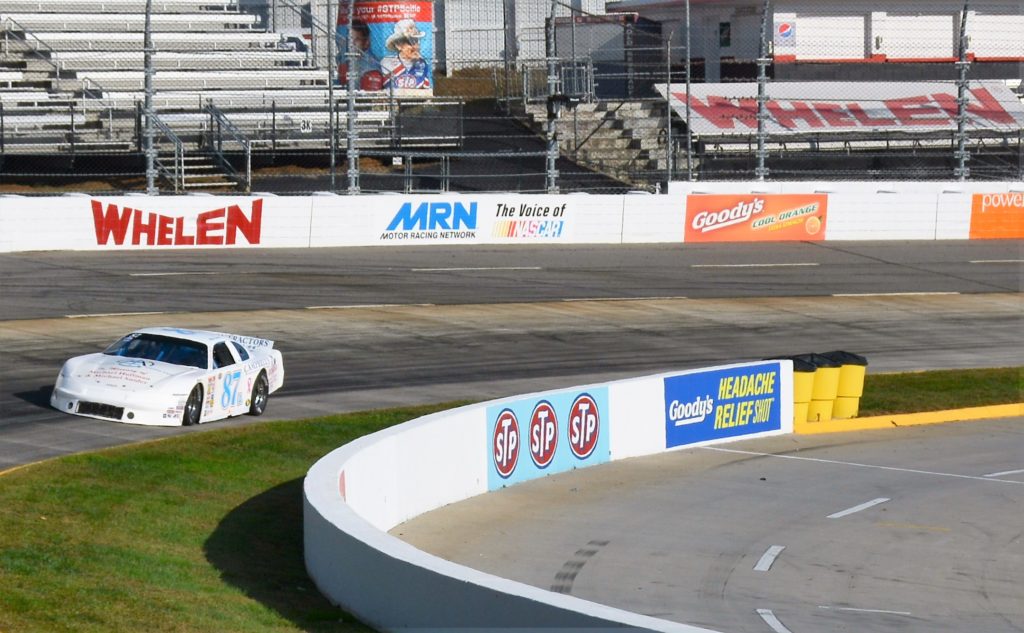 “We were on cloud nine after finding out that I wouldn’t have to race my way in on Sunday,” said Looney. “With our team’s limited budget and resources, I really didn’t see this as possible and I just kept praying to the lord that I wouldn’t wake up and it’s all a dream.”

While the team – which doesn’t even have a race shop, paid crew or crew chief (other than the driver himself) – were sure that history would repeat itself and that the fastest car wouldn’t pick up the checkers on Sunday evening, this couldn’t be further from the truth.

As the green flag waved on the first attempt of Sunday afternoon’s 200 lap ValleyStar Credit Union 300 feature race, both Looney and outside pole sitter Lee Pulliam pulled away from the 42 car field. In fact, they did so without a scratch despite a six car pile-up in turn one, which left Martinsville Speedway officials scratching their heads and wondering how many attempts it would take for a clean first lap of this prestigious Late Model Stock Car race.

Following the second attempt to start this race, both the No. 87 of Looney and No. 5 of Pulliam pulled away from the now 36-car field. Both stayed within the top-5 despite several caution flags. One of these flags was thrown after a three car pile-up ended the day for 2015 ValleyStar Credit Union 300 winner Tommy Lemons, Jr. on lap 85.

As this past winner’s dreams went up in smoke, both Looney and Pulliam continued to battle for the lead until the first competition caution on lap 102. Much like last year’s race, this full field pit stop also included a field inversion of the top eight drivers. Although the No. 5 of Pulliam received the halfway award, the Late Model champ had to fight his way back to the top of the field after the restart.

Although this race resumed with No. 01 of Phillip Morris leading the way, the No. 87 of race winner Mike Looney and No. 5 of Lee Pulliam quickly found their way back to the head of the field and racing for the win.

After a final competition caution with 25 laps to go, which gave teams a chance to put on four fresh tires, the battle between Looney and Pulliam had fans on their feet, wondering who would come out the victor.

With nine laps remaining, it appeared that Pulliam would once again pick up a win in this historic race after driving into the inside of Looney’s left-rear fender, almost sending the No. 87 into the air. Despite this attempt, Looney hung on for his first ValleyStar Credit Union 300 win. 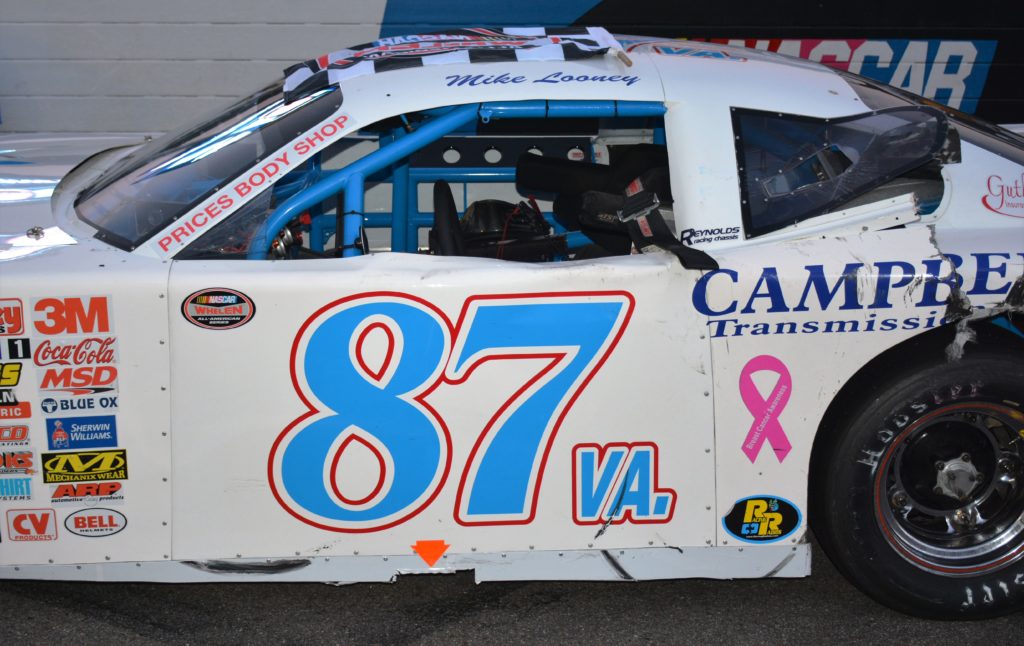 “I just have to thank God for this amazing win,” said Looney. “Every lap counted in this race and I knew that I was going to have to put everything into each one in order to hold off drivers like Pulliam and Morris.”

Along with a grandfather clock and an unforgettable memory, this underdog team will have an opportunity to run a full Late Model season at a track for the first time in more than 20 years of racing, thanks to the $26,000 that they will take home with both the pole and race win.

“This means we get to race,” said Looney. “It means we may get to run some other big races this year. It means we get to buy a new motor this year. It’s possible, if a sponsor comes on, we could maybe make a run for a championship at a local track next year. What money we’ve had, we’ve really prioritized where to spend it. Billy Martin (car owner) and I were joking, I did a little bit of a burnout there for my gang back home, and I was thinking ‘man, these tires don’t have but about 15 laps on them. I ought not do this burnout. We should save them and go somewhere with them.”

Though Looney and Pulliam were the major talk of Sunday’s feature race, 17-year-old Ryan Repko also made a name for himself this weekend. This young gun, who recently came into the late model scene, pulled his No. 14 late model onto the paperclip for the first time this weekend. Although he was unsure if he would even make the 42 car field, after qualifying in the top-3 and a top-5 heat race finish, Repko was running on an adrenaline high and hoping for a first race win. 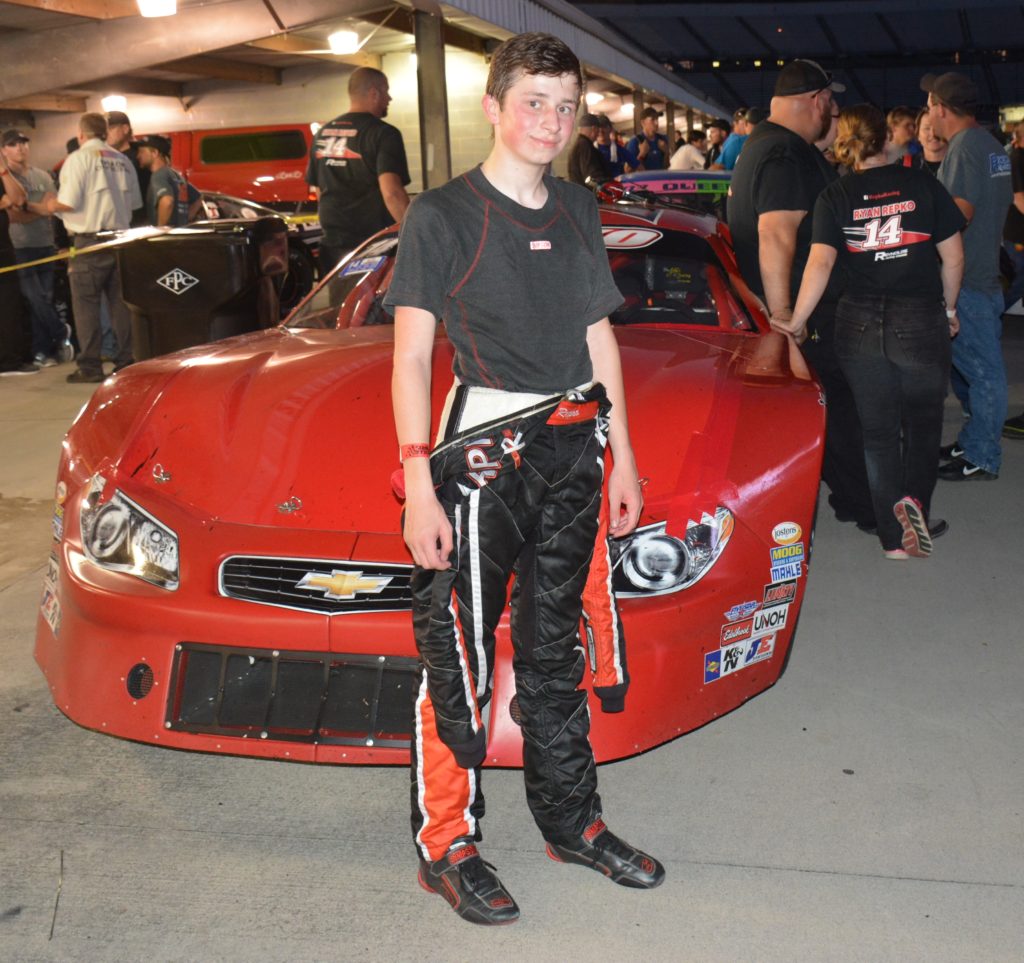 This dream even seemed plausible as Repko battled from 15th place starting position to the top-5 within the first 100 laps of this race. Following a caution on lap 138, a miscommunication with the pace car resulted in Repko locking up his rear brakes and spinning, which sent him back in the field. Despite it all, Repko wound up with a top-10 finish in his first ValleyStar Credit Union 300 competition.

“I was actually pretty disappointed that we didn’t pull off a win, but a lot of people seemed to be pretty impressed with how I drove,” said Repko. “I just hope to end up with a grandfather clock someday.”

Race fans will be in for a treat in 2017 as Martinsville Speedway will host the next ValleyStar Credit Union 300 under the lights on a Saturday night. Stay tuned to RacingJunk.com for details.