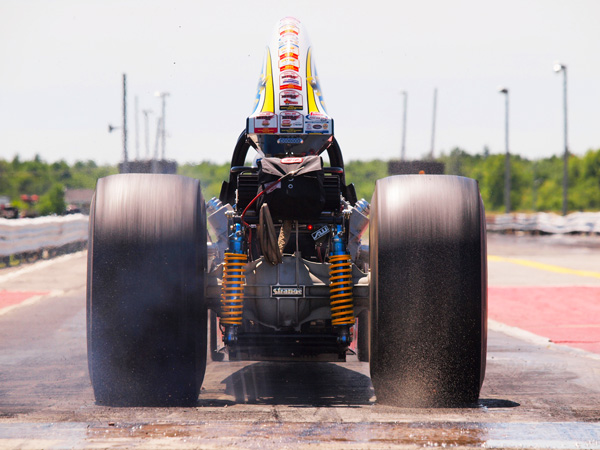 “I felt completely out of my element,” says driver, Pamela Koulaib, recalling her first time driving in a drag race. “I didn’t know how far I needed to back up into the water box. I didn’t know how to do a burnout nor did I know where to stop the car to break the beams. People were very concerned about my size and whether I could control over 700 horsepower safely. My husband suggested that I just take it easy. But I don’t remember ever being worried about the speed. I was so focused and the adrenalin overshadowed the sensation from the g-force. Even today, driving Miss Behavin’, a 1985 Mustang Coupe with a 418 cubic inch small block, I’m much more confident. The vehicle I drive is a lot faster reaching 6 seconds on a 1/8th mile track. It feels completely natural to drive such a powerful car. I feel like I’m in control of the vehicle and can sense what it’s doing and how to react or compensate for any blips.”

As a means of rekindling a nationwide interest in drag racing, the National Hot Rod Association (NHRA) returned to its roots, revitalizing the spirit of the sport by introducing their Street Legal program among a plethora of racing classes. This included the Junior Drag Racing League that pits youngsters from eight to seventeen in pint-sized dragsters, to the “Super” classes that feature the closest races on the planet. The NHRA structure has encouraged an army of weekend warriors to contribute to making it the world’s largest motorsports sanctioning body and to fuel the overall growth of drag racing in North America.

Three primary elements drive in the fans and keep the drivers coming back for more: The ear-splitting noise, the frightening speed, and, of course, those mesmerizing burnouts that cloak the cars in a cloud of smoke. Many racing pundits consider drag racing the litmus test: an experiment to determine the levels of one’s muster, engineering skill, and nerve. As dragster speeds increased over the years, so did the accidents. To reduce the danger at the amateur level, circuits changed their mandate transferring the track size from a ¼ mile track to a 1/8-mile track. There was a revolt from the traditionalists, but his astute assumption paid off. Today, 90% of drag strips run 1/8th mile bracket racing. It has become far more popular with fan and driver, enabling greater and affordable competition, more entries and consequently, more generous purses. 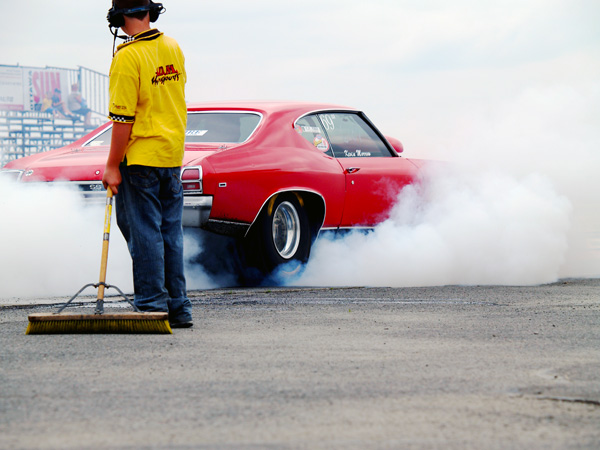 If you’re a gearhead and you’ve got Castrol oil in your veins, you can’t replicate the thrill of E.T. bracket racing. Bracket racing is by far the most accessible, affordable and popular form of drag racing to compete in. The criterion is based on a handicap between predicted elapsed time of two racing cars. The premise is on the driver by placing a premium on performance consistency rather than on raw speed, which in turn, places the onus not on large infusions of money but rather on mechanical and driving skills. This becomes apparent on the driver’s ability at reaction times, shifting abilities and the aptitude of controlling the car. The driver must meet the approximate dial time he/she predicts the car can finish. Go over or under the dialed in time and the driver is penalized. This is known as “breaking out,” when the driver crosses the finish line in less time than the one he dialed in, or “sandbagging” when the driver is deliberately slower than the dialed in time. The anticipated elapsed times for each vehicle are compared, and the slower car receives a head start equal to the difference of the two.

Bracket racing is a “grass roots” level of drag racing and allows almost anyone to race on a fairly even playing field. With this system, virtually any two vehicles can be paired in a competitive drag race. The win will inevitably go to the driver who reacts quickest to the starting green light. Both lanes are timed independently. In some categories, the driver chooses his or her own handicap, or dial-in/dial-under. This applies to Super Stock, Stock, E.T. bracket, and Jr. Dragster classes. In other categories, the class handicap is predetermined and may not be changed. These classes, based on weight or speed of the car, are Comp (has the greatest variety of competing vehicles from cars, motorcycles and even snowmobiles. This is the class where you dial-in your own index number), Super Gas (full-bodied cars and street roadsters that have an index time of 9.90. No dragsters are permitted in this class), Super Street (racers compete on a fixed 10.90 index. All vehicles must be full-bodied cars and weigh no less than 2,800 pounds except for six-cylinder cars at 2,000 pounds.) 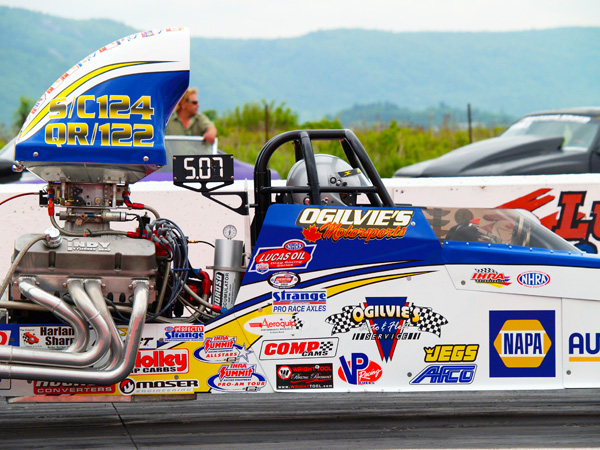 The quickest of the heads-up Super classes (6.80 to 8.90 index), is Super Comp, composed primarily of dragsters. Engine, chassis, and body modifications are virtually unlimited, though all entries must adhere to NHRA safety standards. Four- and six-cylinder-powered entries may have a minimum weight of 1,000 pounds; all others cannot weigh less than 1,350 pounds. Most Super Comp cars are capable of running well under the 8.90 index but use a number of electronic aids, including a timer and adjustable throttle, to run close to the index without breaking out. But don’t kid yourself, these vehicles can move from 0 to 100 at 150 mph. In all these classes, breakout and sandbagging rules apply. It’s complicated, but that’s what makes it so challenging.

The first thing you have to realize is that drag racing, no matter the amateur class, is a passion rather than a hobby. To test your mettle, it’s probably best to start by entering your car or motorcycle into a local “Cruise Night.” These are open to any street legal vehicle with elapsed times of 12.00 to 24.99 seconds. Entry fee is affordable, usually around $25. The circuits are highly professional so you and your friends can boast ‘bragging rights’ as to who “owns” the track. There is no procedure to getting involved in amateur drag racing providing your vehicle meets the requirements, rules, and safety regulations of the sanctioning body you want to race in. For the serious grease monkey though, bracket racing is ideal for the weekend racer. This is the guy who spends hours in his garage modifying his engine and suspension for that split-second edge.

THE COST OF ONE’S PASSION

There aren’t a lot of sponsors to help you along the way, but with a competitive dragster, you can make a sweet sum over the season. In some cases, a summer’s catch can earn you anything from $20,000 to $50,000, but this means travelling extensively from circuit to circuit and winning consistently. For most, however, it’s simply the adrenalin of racing and the camaraderie of the racing fraternity. It is one of the few sports where a family spirit is embraced and members can participate at all levels and responsibilities. The appeal of bracket racing is that you can modify your car as you wish and move up in class when you feel ready. 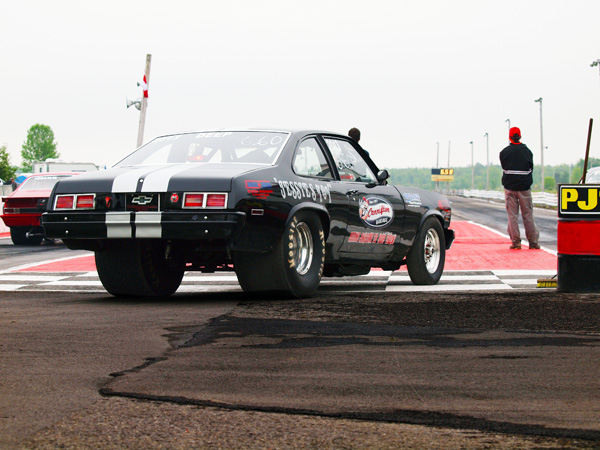 The difference between amateur and professional top fuel drag racing is money, size of operation, modifications and speed. The speed is doubled and the money is stratospheric. High octane isn’t the only smell that gets you high, so does the smell of success. Top sponsors are essential to write off the $4 to $10 million plus annual price tag. And that’s not even a top team. Then there are the categories drivers ascend through. If you take dragsters alone, there is Top Dragsters, Top Methanol Dragsters, Top Alcohol Dragsters, and the big daddy of them all, Top Fuel Dragsters, where the dragsters are equipped with supercharged, fuel-injected, nitromethane-burning engines producing an estimated 7,000 horsepower and referred to as “the kings of the sport.” Today, you need an army of high-tech engineers just to computer crunch the numbers for that extra split second. With these costs to consider, you’ve got to have cash to burn and a need for speed.