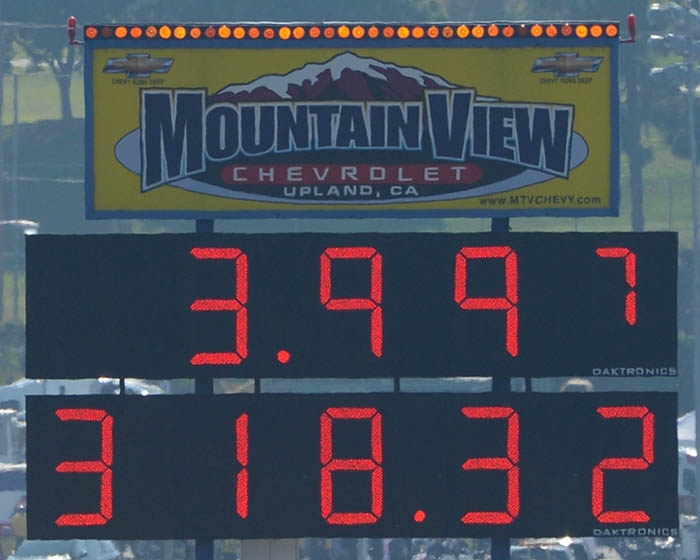 Alexis DeJoria and her Patron XO Café Funny Car team are climbing up the NHRA charts faster than a rock band with a hit song.

After coming off fresh from her first major NHRA nitro win behind the wheel of her Kalitta Racing Toyota Camry at last weekend’s CARQUEST Auto Parts Nationals, DJoria’s future has never looked brighter and her focus is clear.

“When I look back at 2013, it was Tommy (Delago) and Glen’s (Huzsen) first year on the car,” said DeJoria. “They have a different setup and if Del would have had one more year on the car, he probably would have got it figured out, too.  We’re a new team, realistically, and it takes time to build credible runs and information with a brand new car, brand new setup and everything including a brand new team.”

“It was more of a stepping stone or building block process in learning last year.  Towards the end of the year we were starting to get that consistency and some good fast runs, but still wasn’t anywhere where we wanted to be, of course.  It was an okay year, we went rounds, but it wasn’t great and we didn’t win our first race like we were hoping.

At Pomona’s 2014 season opening Winternationals, she started things off with a bang as the first female driver to enter the coveted 3-second Funny Car zone. 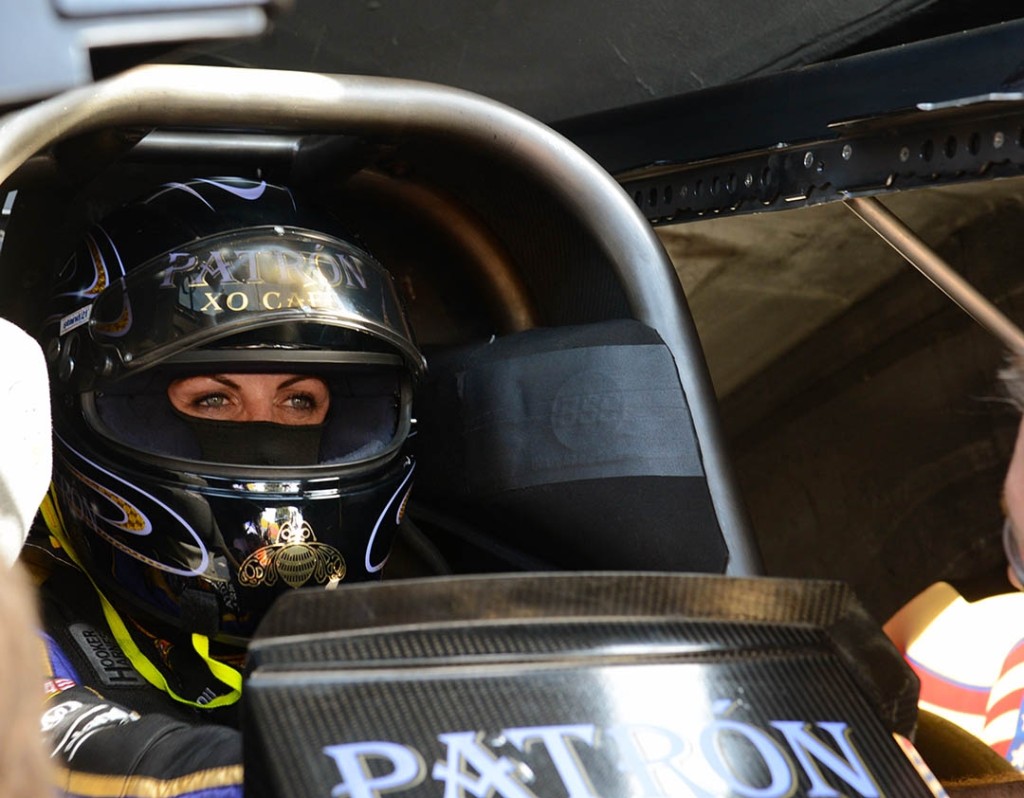 “Again, I understood it was going to take time and I have tons of patience, you’ve gotta have that in this sport.  Going out to Pomona and running that 3.99, it was like ‘Ya know we’re here, we have a good car and it’s going to be our year.’”

It all starts with a great race team turning the wrenches.  Her drag racing instruction is coming from some of the best in the business.  The Kalitta Motorsports team is loaded with talent behind the wheel, but even more in the trailer.

“It’s a very passionate, diehard group of racers over at Kalitta ,” stated DeJoria.  “JimO (Jim Oberhofer, VP of Operations) has been with Connie so long and so are a lot of the guys over there like that.  It’s one of those teams that everyone supports each other one hundred per cent.  You’ll see all the guys up there on the starting line when one of the Kalitta cars is in the finals, and sure enough they were all there for my run.  The official ‘Kalitta mosh pit’ came shortly after.  It’s such a great feeling to be on such a passionate team.  When you say Connie Kalitta, he’s such a legend in this sport.  To be able to race for him and win, the day before his birthday (Kalitta turned 76 on Monday), it feels so good to do that for that man.”

Winning has been on DeJoria’s mind for some while, and after all her success at Pomona, she had a sense that maybe her time had finally arrived. 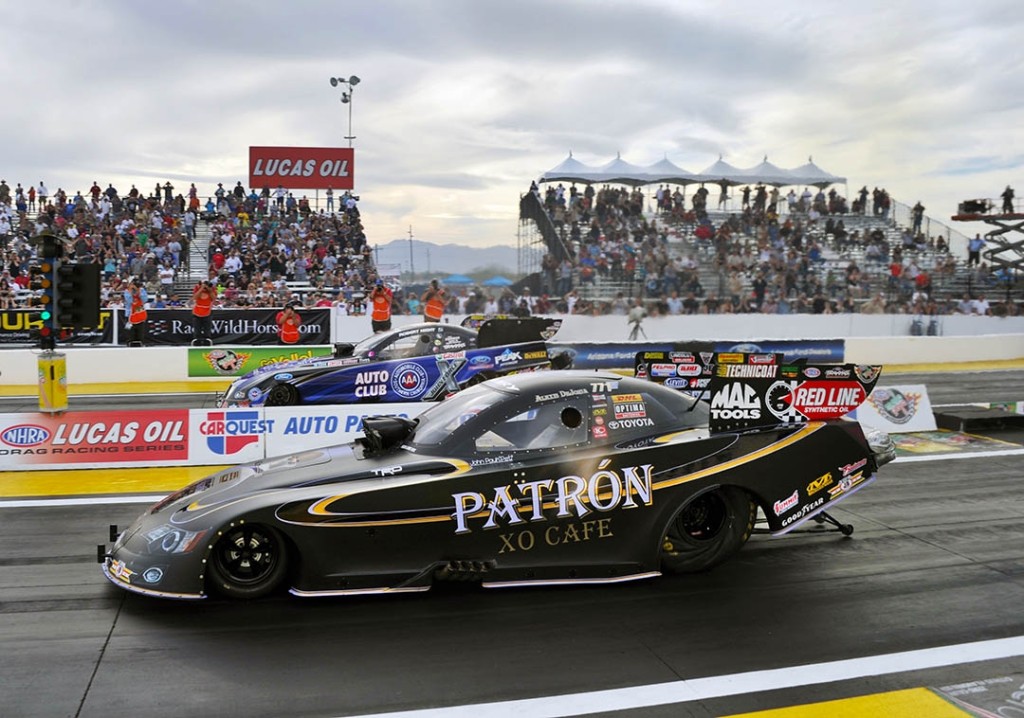 “I did actually,” she said.  “Before I left the house on Thursday night to go to Phoenix I told my husband, Jessie, as we walked out the door that we’re going to win this race.  I felt it.  He reminded me of that just this morning, and he said, ‘you told me, you called it, you knew you were going to do it that weekend’.

“It was just in my gut and after we ran that 3.99 at Pomona were just so proud of just being able to do that because I knew we could and I knew we were a good team.  I knew we could be fast, running in three seconds and that was just one more goal that had been accomplished.  Then it’s on to the next.  Now we need to focus on going rounds, being consistent and win our next race.”

There was a time before all this success came when she, like so many sportsman racers, had to apply her talent and dedication to steadily rise to the professional level.  It all started during her late teenage school years and yes, it was all about the driving.

“You know, it’s funny because in high school all my friends were hot rodders,” said DeJoria, who now drives a Lamborghini Murcielago that her husband, Jessie James, bought her as wedding present.  “They had Chevelles, Bel Airs, Novas, and everyone was building them up and racing around town.  That’s when I got my start and my love for everything fast like that.  I knew I wanted to race; I wasn’t quite sure what kind of racing.  I went to different racing schools like Skip Barber and things like that to learn all I could.

“I went to a drag race when I was 16 in Pomona with a friend of mine that I used to race with and he basically introduced me to NHRA Drag Racing.  Ever since then, it just took me.  That was, a nitro Funny Car to be more specific, something that I ultimately saw myself doing.  It took a little while to get there.  I still had to finish school and I still had other priorities at the time.

“I worked for my father’s company right out of high school.  That was what everybody in the family did and that’s work for the family business – Paul Mitchell.  After four years being there and working in different departments trying to get a feel for the entire company as a whole, which was the plan anyway, I still wanted to race.

“I told my father, ‘Hey Dad, this is my passion and I know the company is your passion and I love and thank you so much for this opportunity.  I learned so much and maybe one day I’ll come back.  But for right now, I need to go do this.’

“Sure enough he said, ‘Okay, if you’re serious about it, go out and go to the school and get licensed and see if you want to do it.’  I went and got my license, came back and I showed him and he was, ‘wow, all right then, go for it’.  Then I found an old used car and started racing in the sportsman categories.  From there I worked my way up and I think the level of confidence and perseverance that I had really proved myself to my father, He’s been supportive ever since.”

As her biggest supporter and No. 1 fan, her father, Jean Paul DeJoria, was very proud of his daughter winning the Phoenix race

“When I landed in Austin, I finally got to talk with him,” said DeJoria.  “He was ecstatic sitting in front of the TV watching it Sunday night.  Everyone had already called him to say your daughter won and the ESPN show hadn’t come on, yet.  He was just thrilled.  The last time I talked with him before I won was after I beat John Force and I was going to the finals.  He was just freaking out.  People at the house were telling me they have never seen him so excited.  We’re going to have a celebratory dinner very soon.” 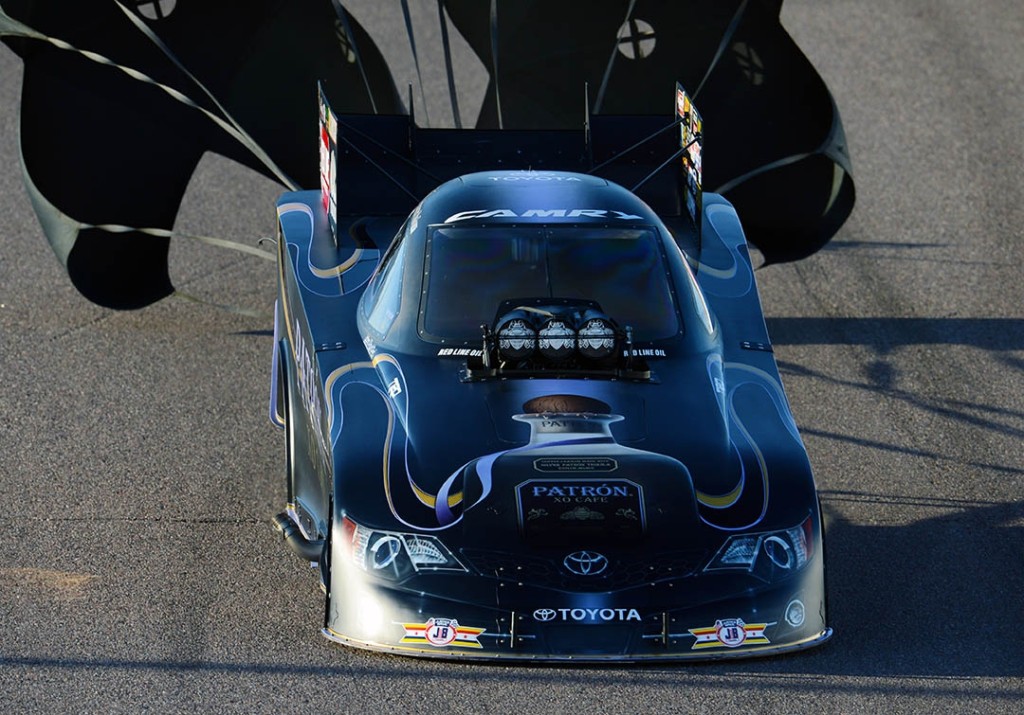 To get to victory lane, DeJoria had to defeat a very tough group in the Valley of the Sun.  She started her raceday against Jeff Arend, second round, her teammate, Del Worsham, then, 16-time Funny Car champion John Force and in the finals, Robert Hight, who she’s been undefeated since 2012.

“It was awesome!” she smiled after she saw the win light against Force in the semi-finals.  “The man is on fire, obviously. He won Pomona, won his 16th championship last year, making three-second runs at Pomona and Phoenix.  Let’s just say he’s been around for a long time.  Anytime you beat that man is definitely an accomplishment.  After all, to be the best, you have to beat the best.  Just being able to do that and go on to my first final round in over a year; it was amazing.”

Then to win, she had another Force car in the Finals with Hight at the helm.   As the light went green, his tires started smoking, losing traction giving her clear sailing to the finish line  as running her best time of the day– 4.043 seconds.

It vaulted her to third in the points and now she’s entered into the Traxxas Shootout at Indy, which places her Patron XO Café team in the right direction to reach her first NHRA Countdown to the Championship.

“Finally, no more voting for me!” she stated knowing now she’s in a $100,000 race and doesn’t have to depend on the fan vote in the Traxxas Shootout.  “We got that out of the way early and I can’t wait.”

Then it’s onto the campaign for the NHRA Mello Yello Countdown to the Championship?

“It’s putting one foot in front of the other.  Obviously, we wanted to do that last year, but we did finish a little bit better. One step up from the year before.  In 2012, we finished 12th, last year 11th and hopefully this year our eyes are set on finishing in the Top 10.”

Now the NHRA Mello Yello Drag Racing series moves cross country for the big 2014 east coast debut at the Gainesville Raceway for the Amalie Oil Gatornationals in two weeks.  Now a nitro winner, DeJoria understands the need for intense focus to maintain this level of performance.  There’s a lot of stress, anxiety, and anticipation in keeping things together, but that’s what make her team so strong.

“It really does,” said DeJoria. “Gainesville is one of my favorite tracks on the circuit.  It always has been.  I used to live right outside of Gainesville for a few years when I raced the Top Alcohol Funny Car of Bob Newberry and Nick Bastiao (Stealth Motorsports).  I was fortunate to run record numbers there.  I won my first round of Funny Car there, too!  I have a lot of memories about that place.  I feel really good going there.

“At the end of the race at Phoenix, Tommy (crew chief, Delago) and I were talking about it, like our heads are already there thinking about what we’re going to do in Gainesville.  It’s a fast track and I can’t wait.  I’m really excited to go racing there.”