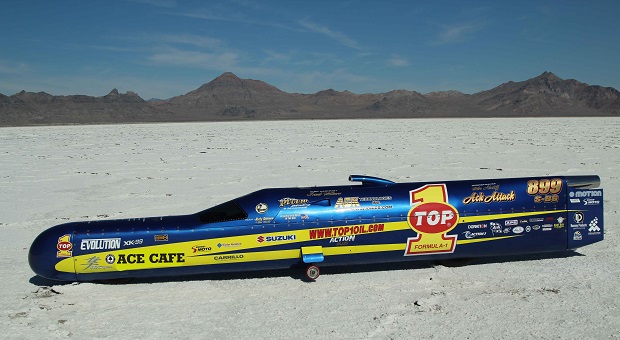 The Top of the World Landspeed Trial has always been both a pioneering achievement and a logistical challenge of epic scale. Chief Engineer Mike Akatiff and Rocky Robinson, the world’s fastest motorcyclist, took the TOP 1 ACK ATTACK to the heights of the Bolivian Andes, rolling onto the Salar De Uyuni salt flats with the intention to exceed 400 mph and shatter the team’s own LSR mark of 376.363 mph, which they set in 2010.

“No wind, perfect salt… No reason it wouldn’t go over 400 mph,” Akatiff said, when the team had finally unloaded the 20-foot, twin-engined streamliner. That turned out to be not quite true.

The trailer containing ACK ATTACK arrived three weeks later than scheduled, on Aug. 5 at one in the morning. “Our container arrived 3 days into the Top Of The World Land Speed Trial’s very limited window, so we were only able to run 2 days and simply didn’t have enough time to sort out our complex machine,” explained Rocky Robinson. “We didn’t achieve our goal, but still have a lot to be thankful about.” They didn’t hit 400 mph, but Robinson reports that they did beat their previous Land Speed Record.

“Our best pass we ran 378 mph before blowing off the turbo manifold a half mile before the lights,” he said. “I coasted dead stick through the lights at 338 mph. Another pass we shredded a rear tire and then had another manifold blow out. I even overshot the pits one time by a 1/4 mile and stopped in the middle of the rough, unprepared salt.” On another run, the outrigger wheels failed to engage and the ACK ATTACK tipped over as Robinson coasted into the pits. 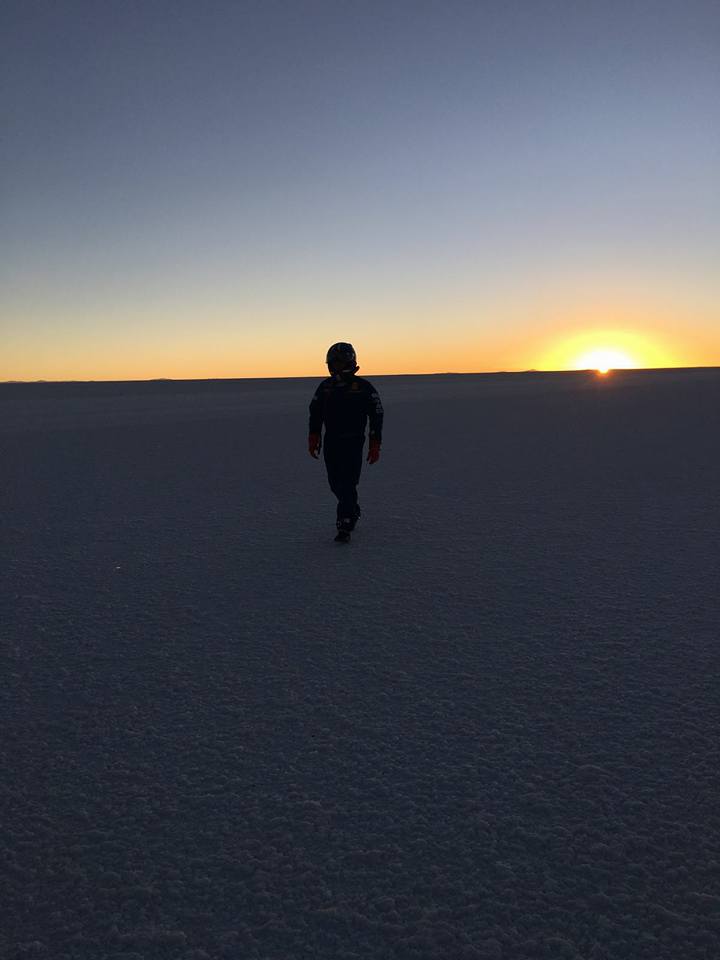 “We went 5,000 miles to one of the more remote places on the planet in an attempt to raise the bar on our own record,” said Top 1 President Joe Ryan. “Unfortunately, time and logistical challenges prevented us from attaining our goal of surpassing the magical 400mph (643 kph) barrier on the last try, but we still have the record and TOP1 will forever be remembered for having the guts to make the commitment to bring attention to perhaps the next major venue for land speed racing.”

At close to 12,000 feet (3,656 meters) above sea level, the Salar de Uyuni offers ideal salt conditions, no wind and miles of space, the likes of which LSR teams in Bonneville can only imagine. More than one record was set at the Top Of The World Landspeed Trial, including Al Lamb’s ride in his turbocharged Honda CBR 1000 to 265.8 mph, and Nick Genet piloting of a naturally aspirated Aprilia RSV4 with the fairing removed to a 192.8 mph record.

“Thank you to our general and leader Mike Akatiff,” said Ryan. “You are my mentor and inspiration. I cannot be more proud of the entire team. We didn’t get our record, but I feel very strongly we have a great story to share with the world!” If you’re interested in that story, you can follow it up to this point on RacingJunk.com – we’ve covered the tale of this attempt before.

The record set by TOP 1 ACK ATTACK in 2010 still stands… for the moment. Mike Akatiff’s ACK ATTACK is still the best, with a motorcycle land-speed record of 376.363 mph. “This is historic,” said Akatiff. “Coming to Boliva is something I’ll never forget!”