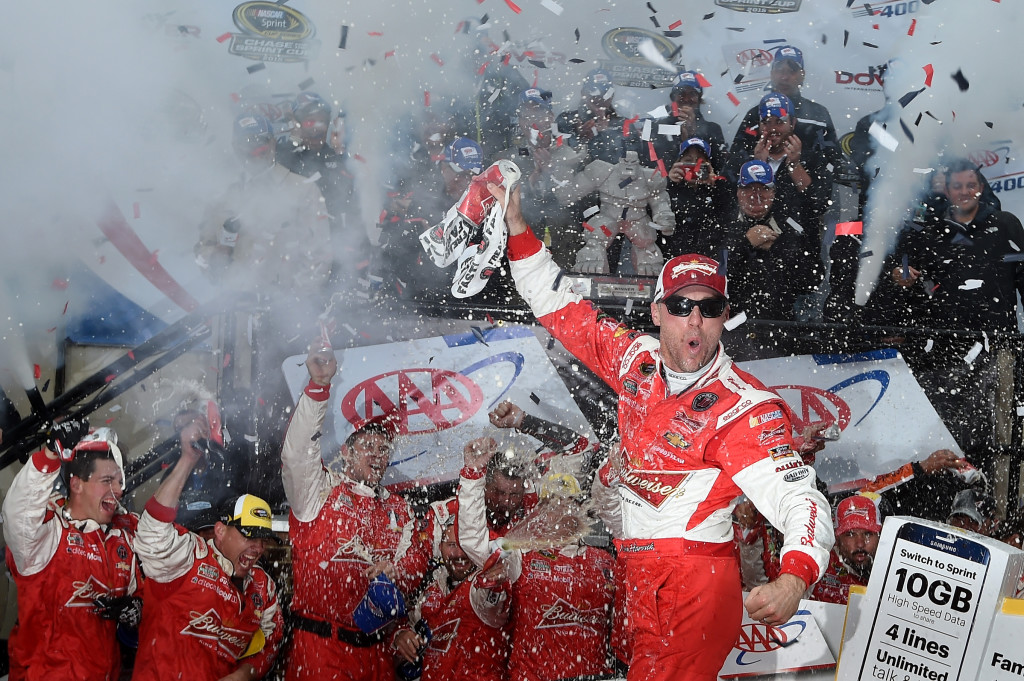 The Stewart-Haas No. 4 Budweiser Chevrolet driven by Kevin Harvick only had one answer to everyone asking him about his chances in the Chase:  ‘We have to win’, and that he did convincingly, driving with a vengeance, leading for 355 laps in Sunday’s AAA 400 at Dover’s Monster Mile clearing his way into the Contender Round of the Sprint Cup Chase.

Harvick, finding himself 23 points from the breaking point of the Contender round, was looking in from the outside and didn’t have an option that a good finish would be enough.  It was win or else!  He was slammed into at Chicagoland, cutting a tire, and was seen fading after running out of fuel in New Hampshire last week while in the lead.

His crew shouted in unison from victory lane, “I believe!  I believe that we will win!” just as Harvick was climbing out in Victory Lane.

“I think we’re better than we were last year, just because of the experiences and things that we’ve had,” said Harvick, now a 31-time Sprint Cup winner.  “I think when we look at everything that’s gone on over the last couple of years; it’s just been a lot of fun. 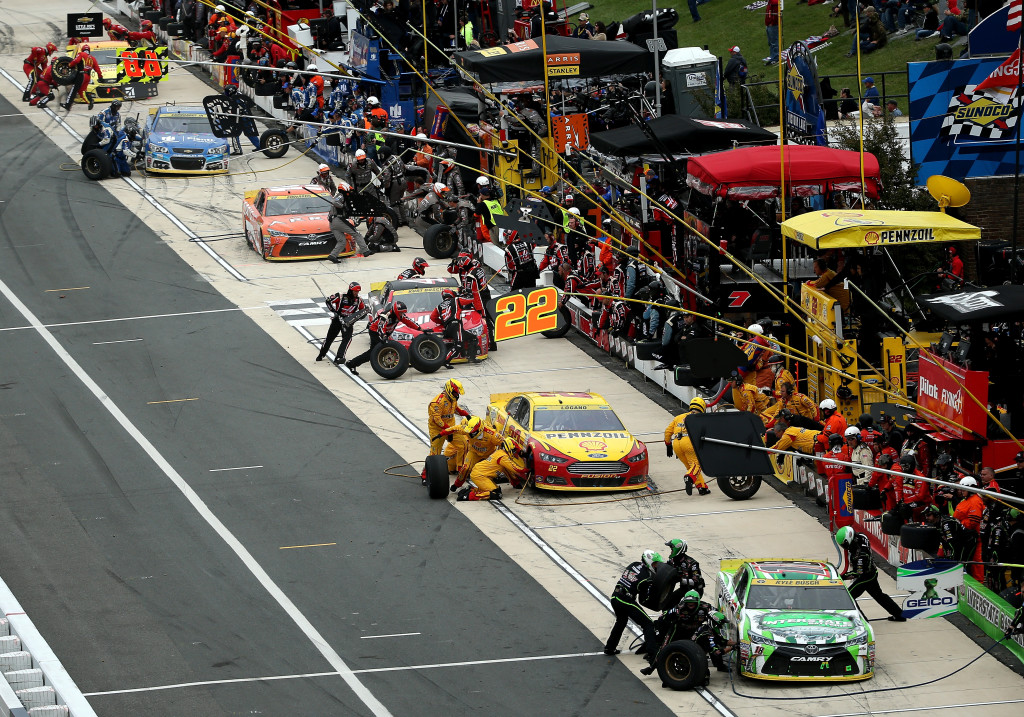 “So, it’s just that never-quit attitude.  That’s what [team co-owner] Tony Stewart said when we went to Homestead last year.  ‘Whatever you do, do not quit until they throw that checkered flag.’”

After a restart with 24 laps left, he pulled away to a 2.639-second victory over Kyle Busch, who likewise secured a berth in the 12-driver Contender Round finishing second.

For the first time since July, it was Busch that was looking for more speed, wondering what is it going to take to compete with Harvick.

“The way he ran today—hell, yeah,” Busch said, none too happy.  “That was a guy that we wanted to knock out.  That’s a guy that can win all these races, and you don’t want to have to compete against a guy like that.

“But that’s why they’re as good as they are, and they were last year’s champion, so they’re going to have an opportunity to continue on.  We’ll see what happens.  There’s still two more rounds to figure out who’s going to make it to Homestead.” 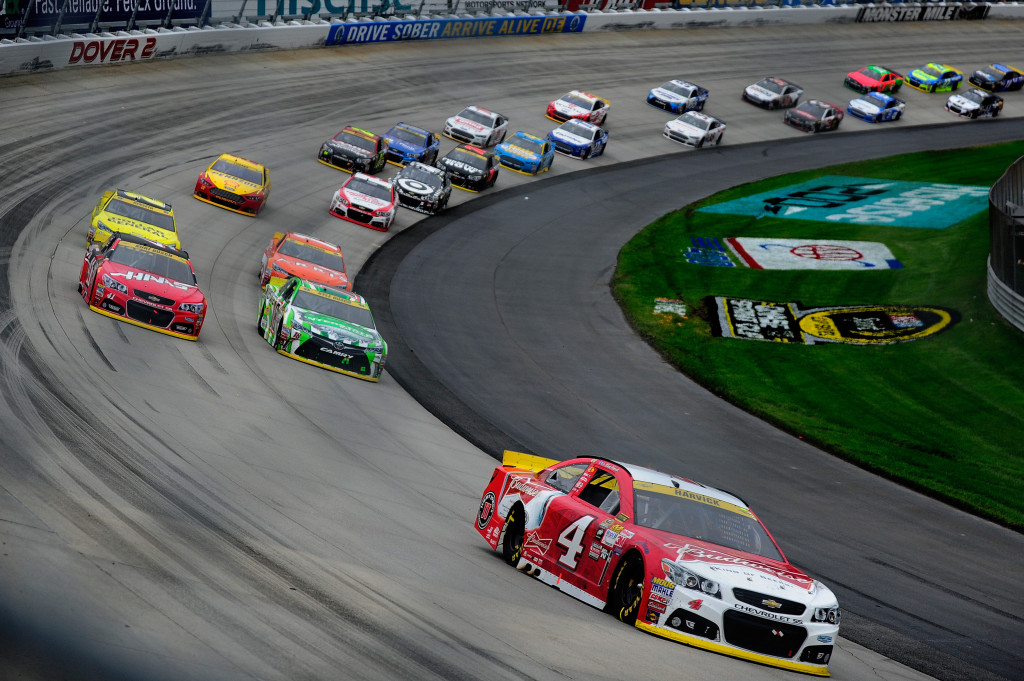 Now major point implications came to the forefront with Dale Earnhardt, Jr. finishing third and by being just ahead of Jamie McMurray in fourth made all the difference of who got the Contender Round’s final slot.  Earnhardt made it in after tying McMurray in points with the NASCAR rule saying the position goes to the driver with the best finish of the round getting NASCAR’s most popular driver into the next round, barely.

Another unexpected shocker was the Lowe’s Chevrolet of 6-time champion, Jimmie Johnson, eliminated after the first round of the playoffs.  His 41st –place finish came about after discovering an oil leak in the rear end housing on lap 106 and it could have been as simple as oil seal breaking.  His Chad Knaus led team replaced the entire assembly sending him back out 36 laps down.

The two other drivers eliminated were Paul Menard and Clint Bowyer. 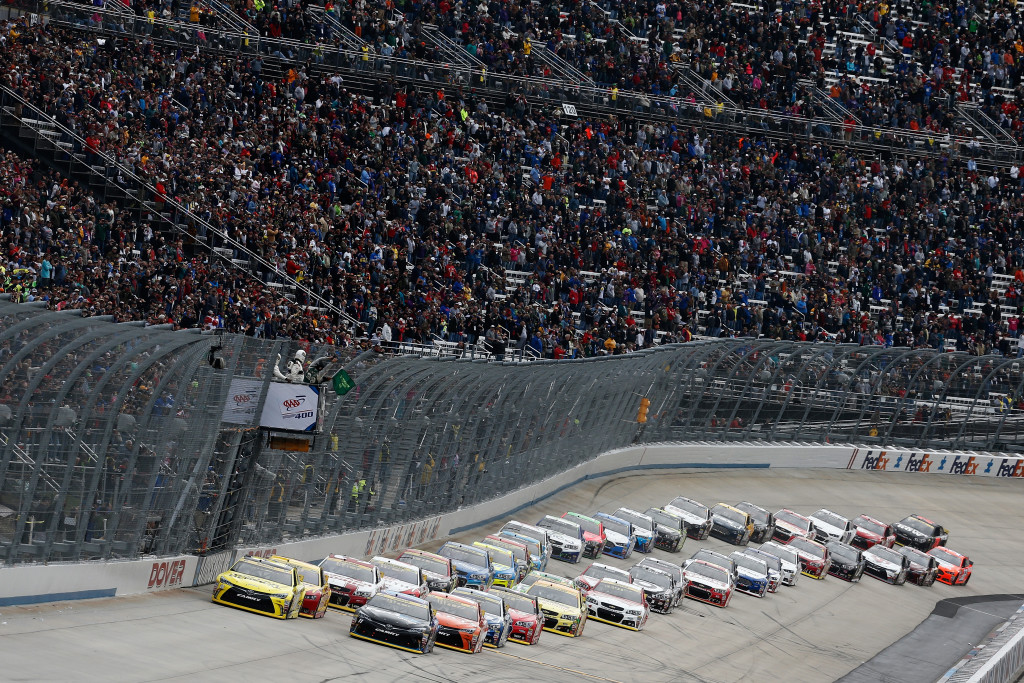 The average speed of the AAA 400 was 119.870 mph after the race had eight caution flags for 43 laps.  There were 14 lead changes among only three drivers.

The Sprint Cup teams prepare for next weekend’s Bank of America 500 at the Charlotte Motor Speedway on Saturday night, October 10, starting at 6 p.m. EDT on NBCSN at 7 p.m. on NBC.  It will be the first race of the Contender Round that will also consist of Kansas and Talladega in the coming weeks.