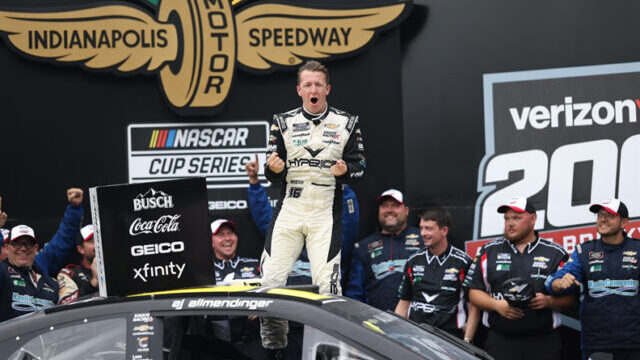 A.J. Allmendinger has always been on the cusp of greatness. From his championship time in karting, to his mastery of the Barber Dodge Series back in 2002, through his championship in the Atlantic series, his wins on the CART Champ Car trail, it appeared the Californian was destined for open-wheel greatness.

Then NASCAR called and The Dinger answered that bell. Since then, pushing to the side his victory with [what is now] Meyer Shank Racing in the 50th Rolex 24 at Daytona in 2012, Allmendinger has battled more inner demons than those on any racetrack. For using Adderall, he was banished from NASCAR until he completed a Road to Recovery program for addiction. He did that and hasn’t had issues since.

A.J. Allmendinger has gone from the highs of INDYCAR racing, where he won with both RuSport and Forsythe Racing on entry, to the lows of not qualifying to race in NASCAR’s Cup Series. He’s had exceptional NASCAR opportunities, with Bill Davis Racing, Red Bull Racing, Richard Petty Motorsports, Team Penske (during the drug suspension, where he was replaced by Sam Hornish Jr., who came to the team from INDYCAR, Phoenix Racing, JTG Daugherty to, finally, Kaulig Racing.

Allmendinger always seemed to be on the cusp in NASCAR but not able to make the grade on the series’ oval circuits. He became something of a ‘road course specialist” and earned his first Cup Series win at Watkins Glen International in 2014. He came close in his oval contests, nearly pulling off the win at Martinsville in 2016, racing with JTG Daugherty Racing (he was with them from 2014 through 2018). 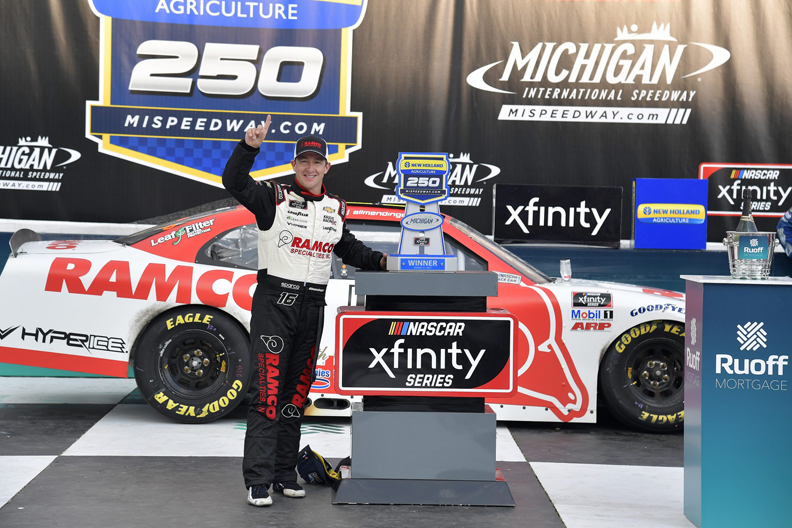 Since 2019, Allmendinger has raced with Kaulig Racing in the Xfinity Series. The small team rarely invests in Cup Series competition but did so this year at Indianapolis Motor Speedway, where NASCAR’s Cup Series and Xfinity Series shared the bill with the NTT IndyCar Series on IMS’ road course. And together they won. It was an unexpected victory by everyone except Allmendinger who, like most in the business, never has given up hope.

His celebration after the Indy win was typically fun. After racing in 10 Brickyard 400 oval NASCAR contests at Indianapolis Motor Speedway, Allmedinger’s top result was 10th in 2008 and 2017. Driving, again, for Roger Penske’s all-conquering IndyCar team, the Californian recoded a seventh-place result in the 2013 Indy 500. It is, to date, his sole start in the Greatest Spectacle in Racing.

But on the 14-turn 2.439-mile road course, Allmendinger survived two overtimes as racers completed 95 laps, 13 more than the scheduled distance. “That was an insane race,” he said. “This is unbelievable. In my wildest dreams, i could never imagine how this played out. The Hyperice Chevy was so good. We had to fight hard. I just won at Indy!!!”

A week later, Kaulig and Allmendinger won again in Xfinity Series competition on the Michigan International Speedway oval. And he did so in similar fashion to his historic Indy win, surviving three overtimes to earn his eighth NASCAR Xfinity victory and third of the season. “Whoa, I’m more tired from the celebrations than I am the driving,” Allmendinger laughed after he climbed out of his No. 16 Kaulig Racing Chevrolet. His message to the fans that chanted his name: “Thank you so much guys… I don’t want to wake up from this dream.”

The dream continues this weekend at Daytona International Speedway, where Allmendinger has pole position for the final race of the regular season, the Wawa 250. And he’s having fun again, something that’s of the utmost importance to the 39-year-old, a man who has few filters and shows exactly how he feels about his situations in life and racing. “I want to win every race. I want to be up front. I want to walk into the shop and feel like a badass because I’m bringing something to the team.”

It’s a long way from Barber Dodge, Atlantic, Champ Car, INDYCAR to the place where A.J. Allmendinger currently resides in NASCAR. He’s had two glorious weekends of racing. Can he do it again?

About Anne Proffit 1014 Articles
Anne Proffit traces her love of racing - in particular drag racing - to her childhood days in Philadelphia, where Atco Dragway, Englishtown and Maple Grove Raceway were destinations just made for her. As a diversion, she was the first editor of IMSA’s Arrow newsletter, and now writes about and photographs sports cars, Indy cars, Formula 1, MotoGP, NASCAR, Formula Drift, Red Bull Global Rallycross - in addition to her first love of NHRA drag racing. A specialty is a particular admiration for the people that build and tune drag racing engines.