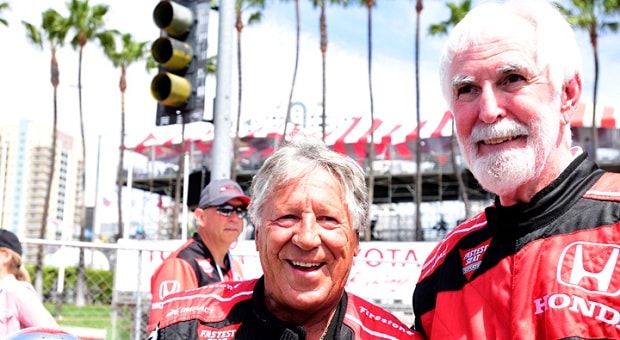 There are an awful lot of ancillary activities taking place during a race weekend: support series are on the track, pace car rides, paddock tours, autograph sessions, lifestyle expositions, concerts. You name it – at the 44th annual Toyota Grand Prix of Long Beach, there were all these activities and more.

Anyone who’s been around the Verizon IndyCar Series knows Honda Performance Development (HPD) sponsors the “Fastest Seat in Sports,” which gives certain celebrities and those who pay for the privilege rides around each circuit with a current or retired racecar driver or, if they’re well connected or considered extremely important, with Mario Andretti.

On Sunday morning before the 85-lap INDYCAR race, stars such as football player Willie McGinest had the chance to ride with Andretti around the Long Beach 1.968-mile, 11-corner street circuit. The final ride went to an older gent named Terry “Piggy” Malone. He’s not someone you’ve heard about, but he has the connections to ride with Mario Andretti because he was the Italian-American’s chief mechanic when he won this race in 1977, driving for Colin Chapman’s John Player Team Lotus.

The black-and-gold Lotus 78 Formula 1 racecars were impervious to competition back in those days, the dawn of the ground effects era. And Malone was in the thick of it, in his second season as chief mechanic for Andretti, having joined Team Lotus at the close of the 1975 season. By that time, Malone worked at the highest level of American open wheel racing, spending 10 years at Dan Gurney’s All American Racers. Gurney started that enterprise in 1966; Malone joined the squad in 1967.

The duo of Andretti and Malone worked together at Team Lotus through the 1980 season. At that point Andretti went to Alfa Romeo and Malone continued his archaeological work in Antartica, F1 having lost much of its allure for him after Andretti won his 1978 championship even as his teammate, Ronnie Peterson, died due to “gross negligence at the hands of the Italian doctors,” Malone said.

Andretti and Malone never lost track of one another and always enjoy meeting up at each year’s Long Beach race, when they get the opportunity to socialize during the Thursday evening Road Racing Drivers Club (RRDC) annual dinner.

It was at the 2017 race that Malone learned he missed the opportunity to take a two-seater ride with his former driver, due to Malone’s failure to turn on his antiquated flip cell phone. Apparently Andretti had an open slot for a two-seater ride and couldn’t get in touch with his former chief mechanic. Andretti was livid, calling Malone a “flat-earther” and telling him, “You’ve got to get with the program, get one of those phones that’ll vibrate in your pocket. There will be a text message and you can get your ride.”

Malone was devastated but he promised Andretti that, by this year’s Long Beach race, he’d be prepared. At the RRDC party, this year held to honor three-time Indianapolis 500 winner Johnny Rutherford, Malone showed Andretti his new phone. “I had just gotten the phone two weeks ago and didn’t really how to know how to work it, but he sure did,” Malone related.

Flash forward to Saturday of race weekend. Andretti, after berating Malone for not appearing at the HPD Fastest Ride transporter early that morning, told him to be there for his 11AM ride promptly on Sunday morning. Fully ready in his suit, shoes and balaclava, the chief mechanic was ready 1.5 hours in advance.

Malone waited as the other celebrities got their rides. Amazed by the Fastest Ride team’s work as they swapped riders in the four two-seaters in fleet, Malone realized, “I was an addition to this highly structured, highly choreographed operation and it’s amazing how good they do it. You stand there and don’t move as you’re staged. I don’t know how many runs they made in that half-hour but they were really nailing them,” Malone said.

Finally, there was no one left in the lineup. Into the elongated black-and-red Dallara/Honda two-seater he climbed, posed for pictures and off they went. “It takes a minute and a half to do a lap; it’s not a full lap because they come in the ‘back door’ to the pits. Mario is not messing about during his runs – he’s not at 10/10 but 8/10 for sure,” he stated.

Malone asked Andretti if his was a ‘special’ lap and the racing star said no. “Everybody’s exactly the same because I get in the zone and I know what the car is capable of doing, what I’m capable of doing. I don’t want to hurt anybody or hurt the car because the wall is right there,” he said Andretti told him.

“I noticed something interesting – where my braking point would be, he went six car-lengths deeper and it was fantastic,” Malone laughed with eyes wide open. “Those were massive G forces, but the biggest thing that got your attention was the braking. The serious Gs mean you can’t hold your head up – it’s serious stuff – and in the turns… it was just terrific.”

As they exited the car Malone told his old friend, “Mario, I flew with the Blue Angels 15 years ago and the back seat of today’s ride was much better than the back seat of the F/A 18.” He just smiled and replied, “That’s not the first time I’ve heard that” as both men laughed.

Mario Andretti was the first American to win a United States Grand Prix, and he put Long Beach’s race on the map. “It’s amazing it’s been here for 44 races – incredible, just incredible,” Malone reminisced. “Chris Pook readily admits, as does Jim Michaelian, that Mario made this race happen. And he did. We are all indebted to him and I’m proud to be his friend.”