Andretti Autosport’s 2021 NTT IndyCar Series program is being reinvented as the team recovers from a 2020 season that was not anywhere near the success team CEO/chairman Michael Andretti intended it to be.

Coming off a 2019 campaign where American Alexander Rossi was deep in the championship chase until the final races, the team’s sole 2020 star in a weighted group turned out to be second-generation racer Colton Herta, redeeming the faith placed in him as a youthful rookie in 2019 with a third-place result in the season standings, thanks to a single win, single pole position but a sufficient number of reliable finishes.

Rossi ended up ninth on the year with zero wins and poles, but plenty of wretched bad luck, only some of it due to his own actions. Teammate Ryan Hunter-Reay was tenth for the year and his 2021 contract wasn’t announced until early this year. Marco Andretti was 20th and Zach Veach 21st, the latter giving up his seat late in the season when it was evident he wouldn’t be returning for this upcoming season. James Hinchcliffe, who drove three races for the team, finished 22nd, the Canadian six-time race winner showing why he deserved a full-season ride.

The “Mayor of Hinchtown” will, in the upcoming season, take on the No. 29 Andretti Autosport Honda-powered Indy car on a full-time basis, with a 10-race support from Genesys, which sponsored the driver in his short 2020 season. This agreement cements Hinchcliffe’s 11th season in the series and rounds out Andretti Autosport’s four-car squad that also includes Herta, Hunter-Reay and Rossi, making them a formidable threat for poles, wins and championships. 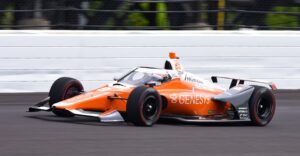 While the team struggled in the early going last year, Hinchciffe noted, “The last half of the season the team really came on strong and the cars were really competitive. I think that gave us a lot of positive momentum going into the off-season. I’d love to see all the [four] cars up there running with a shot at the championship with three or four rounds to go.”

With Marco Andretti stepping back and concentrating on the 105th Indianapolis 500 this May, the remaining foursome could actually remind people of the Andretti Green pranksters from the team’s early days. Then, it was Bryan Herta, Colton’s father, Tony Kanaan, Dario Franchitti and Dan Wheldon, the latter driver taking much of the jokes and pranks devised by the balance of the foursome. Hinchcliffe has a great sense of humor, as does Herta (born to it), and Rossi has been known to perform a prank or 20. Perhaps, with Hunter-Reay in tow, they can gang up on other members of the INDYCAR fraternity and keep the community entertained?

Having fun is one thing, but as team leader Michael Andretti said, “We’re real happy with the way things have gone; we’re real happy with our driver lineup,” moving from five to four cars. “I think we have four great full-timers that are going to help each other to, hopefully, have four of them fighting at the end of the year for the championship. That’s our goal. Can’t wait to get to the first race and see how we go.”

The NTT IndyCar Series season gets underway at Barber Motorsports Park in Alabama, just down the road from Talladega Superspeedway. The natural road-course date has been rescheduled for April 18, with St Petersburg a week later and the first oval contests, at Texas Motor Speedway, scheduled May 1-2.